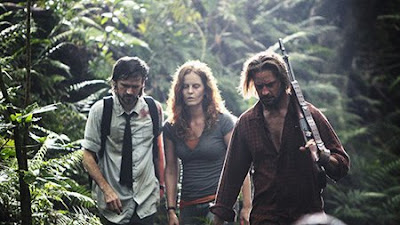 Here are the notes for last week’s LOST workshop at BAFTA, courtesy of my contest winner Nicholas Horwood. Enjoy!
————————————————————-
Day one: With no memory of what strange force brought me here I find myself at BAFTA HQ along with a hundred or so shell-shocked and strangely geeky looking people. Who we were and what brought us here is no longer relevant…we are born again.

We are of course here for the LOST workshop with Damon Lindelof and Carlton Cuse hosted by Eastenders’ producer whose name I didn’t catch.

The workshop begins with a five minute “Best of LOST” clip. This is the first time I have seen LOST on the big screen. I get goose bumps. I mutter to myself “I’m gonna need a bigger telly.”

The clip over, Damon Lindelof to describe how he ended up working on a show like LOST. Lindelof explained how he left film school in New York with very little knowledge of the TV industry and moved to LA 2 weeks later.

He spent 4 years working in the industry including 2 years as an agent’s assistant and writing what he described as “shit”, before he was ready to write professionally. He got a job on a DAWSON CREEK sequel called WASTELAND working as a writer’s assistant. Within 3 weeks of getting the job all the show’s writers had been fired. Lindelof took this opportunity to submit a script of his own. The script was accepted and this lead to him getting an agent. Two months later he got a job on NASH BRIDGES, where he meets Carlton Cuse the show’s producer.

Lindelof described himself as a crazy stalker fan of J J Abrahams the creator of LOST. A huge ALIAS fan Lindelof was desperate to get a job on the show and nagged his agent constantly about getting him a job on ALIAS.

One day his agent phoned him up and announced that he had some good news and some bad news. The good news: he’s got a meeting with JJ Abrahams, the bad news: it’s not about ALIAS but “a crazy show about a plane crash”. JJ and Lindelof hit it off immediately and went on to create a treatment for the show. ABC liked the idea so much that they gave them 3 weeks to write the script for the pilot…which they would start filming in 3 weeks!

Cuse’s journey to LOST started at Harvard where he was originally studying medicine. He described how when he first witnessed an operation taking place he fainted. This he took as a sign that he was not meant to be a doctor. He decided to study law instead.

Cuse’s career plan took another change of direction when the Harvard Lampoon organized a screening of AIRPLANE. He realized immediately that Film and TV was where his future lay.

Cuse made a documentary about rowing and got a job as an assistant to a movie executive, eventually becoming a reader. He read and wrote coverage on over 300 scripts before he realized he had learnt enough to write himself.

One of his first gigs was working with Michael Mann on CRIME STORY, and over time worked on THE YOUNG INDIANA JONES ADVENTURES and MARTIAL LAW.

When Lindelof approached Cuse he was working on CHARLIE’S ANGELS and jumped at the chance to be involved, giving up a lot of more lucrative jobs.

For both men the most commonly asked question regarding LOST was “Are you making it up as you go along?” which was far from the case. Like any US TV show there are a lot of writers involved and planning of the “architecture” of the show was very detailed and thorough. Although both writers advocated writing when you didn’t know where the story was supposed to go. As Lindelof put it “IT can be paralyzing for a writer to have to plan too much and exhilarating for a writer to write and be surprised by what ends up on the page!”

Both Lindelof and Cuse were honest about some aspects of the show. The first 6 episodes of season 3 had the main characters in cages…because at that point they didn’t know when the show was going to end! As soon as the network told them how many episodes they were required to write they could let them out of the cages!

They were also quite frank about Jack’s fake beard, which Cuse described as not one of LOST’s better moments!

Leadoff’s closing remarks regarding writing in general were that all writers suffer from the same insecurities: fear of what people think of their work and fear that they are not communicating properly what they want to say. He also talked about how much becoming a professional writer was about timing, being in the right place at the right time and how you always had to try and sense when and where your own opportunities presented themselves. You have to believe in The Force is what he basically said. Although what part The Force played in crashing flight 815 on a strange island somewhere South of the Twilight Zone he didn’t say.

In wrapping up Lindelof and Cuse suggested what I think could be the next big TV event when season 6 of LOST tragically ends: An EASTENDERS/LOST crossover! The smoke monster moves to Albert Square! Cuse confidently announces the smoke monster would be up for it.