And Now For Something Completely Different…

…As writers, we’re all suckers for random acts of kindness and happy endings. My lad and I seem to have a bit of a habit of finding random animals including an actual snake not so long ago – and it seems my friends have the knack for discovering creatures in trouble too! So, without further ado: my mate Jared found a duckling. This is *their story*…! Enjoy.
————————————————————————– 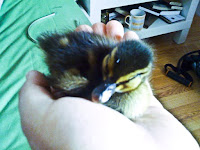 Last week I discovered a poor battered little duckling lying in a filthy insect-ridden puddle near work. He could barely move and a couple of hungry crows were moving in. When I stood him up he simply fell over again. His right eye was completely closed over and swollen. When I picked him up his little head just flopped to the side. He was definitely on the way out. Me being me, I stuck him in a little box and took him home, at least so he could die in a warm place rather than be eaten alive by crows. 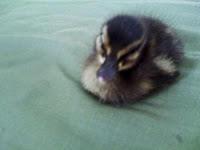 He was in a bad way by the time I got him home. His right eye was swollen to the size of a pea and he was silent and hardly moving, just occasionally shivering. I washed him and cleaned the eye up as best I could, spent ages drying him out, then gave him a homeopathic treatment for worms, which worked to full effect about half an hour later (yuk!) then I settled down to watch a film holding him in both hands to keep him warm, occasionally making him have sips of water with more mischievous medicine in it. Finally put him to ‘bed’ at 3am and was reassured for the first time when he complained at being left alone – every time I put my hand back in the box he’d hop straight back into it and doze off – then I went to bed. 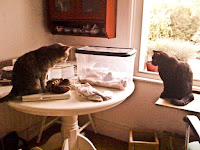 Got up in the morning, took the cover off the box and suddenly this snoozing little ball of fluff woke up and transformed into manic squeaking little ball of energy and jumped onto my hand, ran up my arm, and immediately settled down on my shoulder, pecking at my ears. His eye had gone right down completely but was still closed up. I ran a bath, plonked him in, and off he went like a wind up toy, guzzling water on the way. Two cats had front row seats for the fun filled swimming event; Fidi (my boy) was in the sink staring down in pure wonderment, and Kala (my girl) was on the toilet looking down with what looked like pure hungerment. I chopped up and sogged up some porridge oats and put them in the bath with him and he hoovered them up, then took him out, dried him, gave him some mashed up egg yolk, then took him for a bike ride down to the local vet. The vet checked him out, said he’s a strong little thing and he’ll try and sort the eye out, check him out properly, and if all goes well send him off the duck sanctuary to hang out with all the other orphans. I gave the vet a donation and cycled to work a happy person.

The vet phoned up later that day. He said he was filling out some standard forms and did I have a name for the duckling? I said, well he was a little star all night, so how about calling him little star? Vet said okay, took a few more details and that was that. Saturday morning I receive a text message from the wetlands waterfowl sanctuary saying, “Just to let you know that Little Star arrived at his new home today, happy and healthy, and is already making friends with the other ducklings.”
——————————————————–
Those cats look STARVING – just as well the duckling didn’t end up at my house, my cats would’ve scoffed him as soon as look at him, lol! Have you ever found anything unusual on the way to work?

3 thoughts on “And Now For Something Completely Different…”