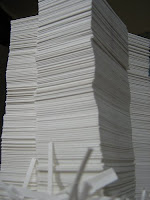 I think the PDF may just be the saviour of forests worldwide: I swear on all my cats’ and children’s lives, if the backlog of scripts I have were made of paper instead of megabytes (or whatever computer files are made of), I think I would have to resort to actually creating a NEW house made entirely of scripts, for there would be no way in hell I could get to anything useful or interesting in my real house. I always find January quite busy because of people’s new year resolutions to get writing finished and sent off to various people, but bloody hell! I’ve never had one as busy as this. What’s wrong with you people?? (Kidding, honest – keep ’em coming).

Given all the furore about script reading yesterday, it seems quite appropriate I got feedback in the middle of the night last night, on my old spec that’s gradually becoming a new spec, such is its transformation: lots about it is good apparently now (in comparison to a draft before Christmas which rather went off the boil), but I still have my story priorities all wrong.

I know exactly what the reader means, which is great. Not so great? At this moment in time I have ZERO idea what to do about it, especially as it would mean a new beginning and new ending (well at least the middle is okay, it is the biggest bit). Or do I swap the end and the beginning I have at present AROUND? The arena needs some re-aligning too, for the third time. Cue much obsessing. Argh.

This particular script, GRACE, means a lot to me: in its first incarnation, it was a thirty minute script as an assignment at college, that’s how long ago it was conceived; it also has a lot of really personal stuff in. It is going to my Writers’ Academy submission this year – so I can safely say that if I don’t get as much as an interview THIS year, I’m going to be seriously gutted ‘cos I will have put absolutely everything into my application.

That’s not to say I haven’t put my all into previous years’ applications: I’m a committed continuing drama fan having literally watched all the series on the WA for years, plus I’ve spent hours poring over those questions on the application form, but I haven’t written a script specifically for it before, but sent in what I thought was “my best work”, as recommended. Of course, this up to personal response. The year before last I put my supernatural thriller, Thy Will Be Done, in as my sample. It’s the spec I’ve got the most meetings and opportunities from, plus BBC Wales and the Writersroom had loved it too, so I’d even dared hope a little more than usual. But alas, no.

Still, I believe, 100%, in the project and am passionate about the story behind Grace – it’s gone through multiple drafts, having returned to page one and seven times! My next one will be its twenty second if I include all my efforts when I was just a girl and knew absolutely nothing about screenwriting (that very first draft reads like an actual play, just acres of conversation with just two scenes! Bless). Anyway, hopefully Grace will swing it, finally and get me through the door at least. Maybe. We’ll see, anyway.

Talking of the Writers’ Academy, head honcho Ceri Meyrick is blogging about the process all this week – so if you’re like me and want a place so desperately you’ll give up a kidney or your first born child, check it out.

previousIn It For The Money?
nextSAFE Films