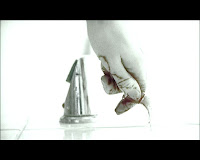 Just a short one this morning -I’d like to ask you peeps out in www.land to join my Facebook group, Safe Films. It’s a dedicated group for my collaborations with the marvellous Schuman of Studio Schoque. The picture is the one I’ve posted here – that creepy, bloody hand is actually from a dark, supernatural short we first worked on together way back in 2005, “The Design”.

We’ve got big plans at Safe Films: at the moment we’re in the middle of casting for our very first short together, entitled “Safe”: it’s about a young woman’s desperate quest to save her baby, even from beyond the grave. We did our initial casting last saturday – and very well it went, too. There’s still two roles going however, so if you’re a female living in the Bournemouth/Poole area, do check out the discussion board cos there’s a casting call with all the details on there.

We’re not the types to let the grass grow under our feet: in-between casting people on Saturday we actually planned ANOTHER short (I just have to write it now!) and we’ve also been planning for a feature. So watch this space! Also, there will photos coming on the Facebook group of the auditions, rushes, trailers, etc too – so if you like watching “behind the scenes” stuff on filmmaking, then Safe Films is the place to go.

So join here. See you there!

previousBrain Exploding. BRB.
nextScene Focus # 2: The Literal Versus The Universal