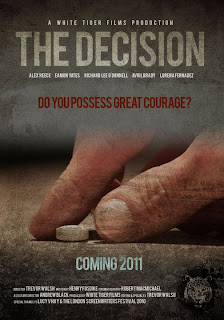 Exciting news, short film fans. The very first production to come out of Film Shorts Club, The Decision, is up online and available to view, right now!

White Tiger Films produced The Decision, with Bang2writers Trev Walsh directing and Henry Fosdike as the writer. The Decision placed second in the London Screenwriters’ Festival “Short Script Challenge” (now called The Greenlight Award) last October, so I for one am DOUBLY delighted to see Bang2writers getting together like this and ensuring their work gets out there. Nice one fellas!!!

White Tiger haven’t stopped there either – they’re currently filming JUMPERS by Bang2writer Claire Yeowart right now, too. So what are you waiting for? Get in on the action and join Film Shorts Club (link below) right now and get filmmaking!! Don’t forget either ALL are welcome… writers, producers, directors, crew, actors, EVERYONE! If you’re part of Film Shorts Club already, make sure you share this great news about this first production via Twitter and your Facebook walls and encourage your filmy friends to join too!

The first rule of Film Shorts Club? EVERYONE TALKS ABOUT FILM SHORTS CLUB!

Add your name to The Film Shorts Club registry here

previousNovel Writing # 1
nextWhat’s The "Right" Length? (For A Script! Quiet At The Back)