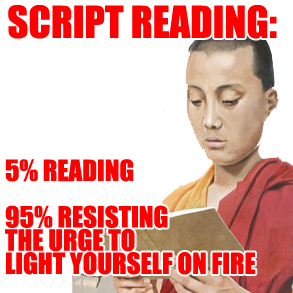 Thank you for giving me the opportunity to read your work. Mixing genre, dialogue and characterisation in such a fashion without a discernible sense of structure or narrative logic had never occurred to me before, so it was quite a revelation.

Thanks also for your insightful emails following my coverage of your work. Though script reading and writing is pretty much all I do, I would never have been able to recognise your evident enthusiasm without the guidance you showed me. Equally, your use of profane language and personal insults regarding my age/gender/work and production history* (*delete as appropriate) meant I was suddenly able to comprehend your previously incomprehensible story.

Though I have read probably in excess of ten thousand scripts over the years and written what feels like as many drafts of my own projects, I was unaware that proper formatting was, in fact, superfluous to the industry; equally, I did not realise you can use Times New Roman or Comic Sans in comparison to everyone else and “still get read”. I did not know that “not enough white on the page” only applied to other writers and not yourself. Equally, I was unaware that a scene direction with no clear image was up for dispute: now I realise that characters “thinking”, “realising” or “reminiscing” all have immediately obvious external actions, despite their being internal thought processes.

I am sympathetic that you “don’t trust supposed script gurus” like Syd Field, Linda Seger, Bill Martell or indeed any other source, even though you are not familiar with their work to make a judgement on whether they have anything useful to say or not. Conventions like structure are clearly useless anyway and writing symbolic or arthouse narratives mean you are exempt from worrying about them, since if no one understands, “that’s the point”.

I also realise now it is possible to write a screenplayjust by instinct, relying solely on watching “hundreds of hours” of movies, never having read ANY actual screenplays. Similarly, I now realise that though a script with no discernible plot, protagonist, antagonist, secondary characters or arena would disbar most writers from getting optioned, this does not apply to your good self. Also, I now recognise my error in pulling up your flagrant and offensive use of stereotypes: just because your mother/sister/boyfriend/lover/next door neighbour was like this, obviously ALL others can be tarred with the same brush and generalisations employed with abandon.

Also, many, many thanks for your repeated attempts to “make me understand” your story by sending repeated emails telling me to “look back” at your screenplay as you re-explain your plot line or characters’ motivations. Evidently my lack of understanding is my fault and by emailing me and answering the questions I raise in the coverage, miraculously the draft will work! Besides, script readers are well known as people who like to ask questions of screenplays just for the sake of it, after all. Of course, a writer can always get work made regardless of holes in the plot, questionable character motivations, lack of arena or story: producers are only “money men” after all and don’t notice such “minor details”. Also, in the long run, writers can stand in cinemas and answer the questions their screenplays raise for audiences, or better still, forward the email they sent the script reader …What was I thinking?

Lastly, thank you for asking my advice on where you “go from here” and then telling me I am “plain wrong”; thanks also for being worried enough about your draft to ask me questions, yet not have enough time to email me back and thank me for taking the time to reply, which I always do. It’s only my job: I don’t put any personal thought into this, after all.

I do hope I’ll be reading your work again!