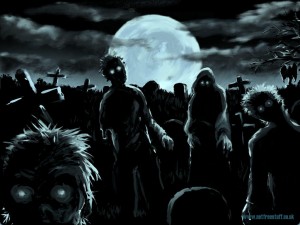 I recently asked Bang2writers to get in touch with their thoughts on narrative function, so Ben W emailed me this:

“I was in a meeting recently and the producer kept going on about how much she liked my theme of “Anti-Capitalism taking on big corporations”. I just nodded and said “thanks” but to be honest, I didn’t really know what she meant because I never really thought about any of that writing it … To me, it’s just a Zombie movie! So who’s right?”

The dictionary defines the word “theme” as an “implicit or recurrent idea”. Typical themes in movies might be “good versus evil”, “survival”, “acceptance”, “redemption” or “identity”. Novels *may* have more “complicated” themes … for instance, I was told by four different readers they felt the theme of my novel is “What I didn’t know THEN, I know NOW.”

But that’s just it – themes are often as open to interpretation as everything else in this writing lark. Did I sit down and think, “What I didn’t know THEN, I know NOW” whilst writing my novel? No I did not. I was concentrating on the structure and the story. However, I can see why those readers believed that was my theme – so it is. To them and by happy accident, me too. However even if I had believed I had written a different theme, I believe the author is dead, so whatever my readers “took” from my narrative is the “right” answer, since it’s open to interpretation based on that individual person’s experience, values and beliefs.

I haven’t read Ben’s script, but apparently Zombies frequently represent mindless consumerism in movies  and it’s not difficult to see why. Consumers are frequently called “Zombies” and Zombie movies often have scenes which take place in shopping malls, which is no accident.

So I think it’s not a question of “who’s right” so much here. Instead I would recommend Ben has a think of HOW his script might be seen by others – and it sounds like this producer has made a very common “reading” of his Zombie script. From there, I would recommend Ben considers whether he WANTS his script to be seen in this way: is *that* the “right” thing for it? Or maybe he doesn’t care, in which case all is fine.

So next time someone comments on the theme of your script, don’t think whether it’s the “right” theme (as it can be open to interpretation); think instead whether that person seeing it in that way HELPS or HINDERS your script’s chances. If it helps, all well and good … But if you believe it hinders, perhaps it’s worth a rethink and a rewrite.