The 10 Most Iconic Teachers in Movies, TV and Literature 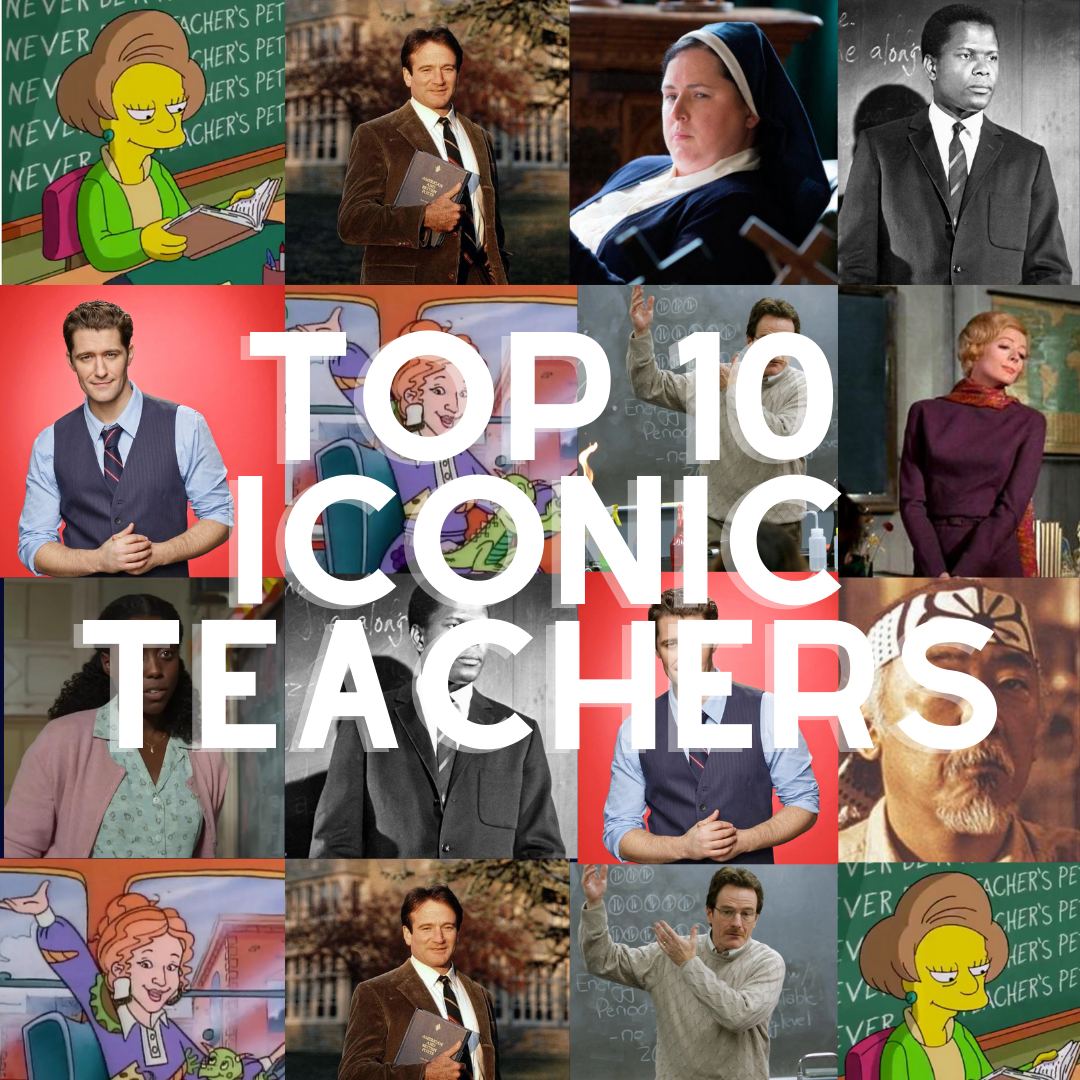 In media, teachers are often relegated to secondary character status. They may appear onstage to inspire their students, drop a pearl of wisdom, and disappear from whence they came. And while this can be an accurate of the fleeting presence of teachers in our own lives, it doesn’t do justice to the impact a good (or bad!) teacher can have on us.

With that in mind, I wanted to pay homage to the most iconic teachers from movies, TV, and literature in true Bang2Write fashion.

Consider this a star-studded teacher’s lounge, featuring some of the most memorable mentor figures from fiction.

Whether they’re the main character, or simply drop in once and a while, here are ten teachers who have made an impression on me … 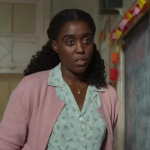 Miss Honey is the teacher we all wish we had. As sweet-natured as her name would suggest, she often shields her adoring students from tyrannical rule (and terrifying hammer-throw) of headmistress Miss Trunchbull.

Despite — or perhaps because of — her own troubled past, this nurturing and kind teacher ends up semi-adopting Matilda at the end of the novel in a move that  wouldn’t pass today’s safeguarding standards. However it’s Miss Honey’s maternal and nurturing spirit that has has allowed her to remain beloved by readers young and old. 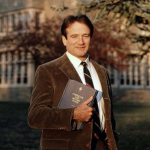 “Oh captain, my captain!” If there’s one thing better than a great teacher, it’s a great teacher who doesn’t play by the rules. John Keating’s maverick approach to teaching throws standardised testing to wayside. He encourages his students to follow their passions, question authority, and read some good books along the way.

While the whole film is a love letter to teachers and their power to energise and inspire, it’s the film’s rousing final scene that will have you shedding a tear and mounting your desk in appreciation for this fearless educator. 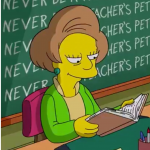 On the surface, the grouchy, jaded, and chain smoking, Edna Krabapel is a less-than-ideal candidate for a fourth grade teacher. But despite the toll Springfield’s public school system has taken on her spirit, viewers can occasionally catch glimpses of a devoted teacher underneath it all. In the season 22 episode “Moms I’d Like to Forget”, Edna gets into a scrapt with another teacher for insulting her class. Mrs Kl’s more human moments remind us that, no matter how burnt out a teacher may appear, they were once called into the profession to genuinely help children — and may hear that call again, once the hangover wears off. 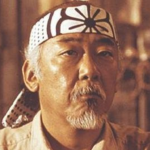 After retiring to a quiet life as a maintenance man, aloof karate master Mister Miyagi is drawn back into the world of martial arts when he witnesses the young Daniel LaRusso being targeted by bullies. After exploring peaceful mediation and exhausting every other avenue, he reluctantly agrees to teach Daniel — through a series of seemingly unrelated exercises.

His unconventional method of teaching, ordering his young student to paint fences and wax cars, tests Daniel’s patience. But just when Daniel, and the audience, start to wonder if Miyagi is just using his pupil for free car detailing, the pieces finally come together, and Daniel wins the All-Valley Karate tournament using the skills he’s acquired. A reminder to us all to occasionally sit back and trust the process, even if we don’t immediately understand. 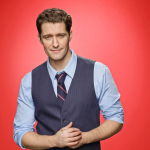 His teaching methods are questionable (lest we forget the time he framed one of his students for drug possession), and his song choices are often cause for concern. But if we put this all to one side, we can see that the head of McKinley High’s glee club did, for the most part, have his students’ best interests at heart.

Affable, generous, and dedicated to his class, Mr. Shue pours an inordinate amount of time and energy into making sure his pupils think big and chase their dreams. While we can’t comment on his skills as a Spanish teacher (was he ever in class?), his devotion to helping his kids “make regionals” certainly deserves recognition on this list. 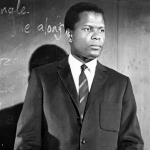 6) Ricky Braithwaite (To Sir, With Love)

The story of Mr Braithwaite’s journey as a black inner-city school teacher in post-war London, coming up against racism and class struggles, is made even more remarkable by the fact that it was inspired by true events. This semi-autobiographical novel chronicles Braithwaite’s first year as a teacher, tasked with bringing an unruly and hostile class of kids under control, and inspiring them to love learning. His attempts to do so, bringing his pupils to museums and exploring the world outside of the classroom, are initially met with resistance — but Ricky’s tenacity and determination are rewarded eventually, with the respect of his utterly devoted students. 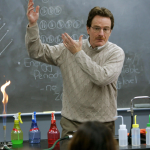 While his journey over the course of the show’s run took him far from the classroom, we first meet Breaking Bad’s antihero Walter White as an overqualified, overworked, and underpaid high school chemistry teacher. Sure, we don’t spend much time with Walter in class (and yes, his most prominent student, Jesse Pinkman, went on to become a street-level drug dealer) but Mr White’s descent into becoming the most feared man in New Mexico serves as  stark reminder that we should really be paying our teachers a suitable wage — lest they all become “the ones who knock”. 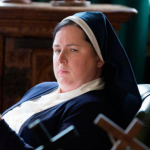 Sometimes, the best teachers are the one who simply doesn’t care — or at least, the ones who refuse to sweat the small stuff. The formidable and sarcastic Sister Michael rocket launched from guest star to firm fan favorite over the course of Derry Girls’s four seasons, largely due to her withering put-downs and unashamed disillusion.

Despite her prediliction for irritation, Sister Michael remains a staunch supporter of the girls at Our Lady Immaculate College, silently cheering them on from the pews. Not that she’d want them to know that. 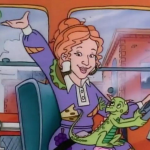 Quirky and kind and possibly unhinged, Ms Frizzle serves up adventure after adventure to her class, with the help of a magic bus, of course. Her class trips are the stuff legends are made of, with students sent across space and time to learn the sort of lessons a classroom simply can’t provide.

Her encouragement and words of wisdom would do us all some good, no matter how old we are: in fact, one could argue that the silicon valley mantra of “move fast and break things” was inspired by Ms Frizzle’s regular reminders to “take chances, make mistakes, get messy!” 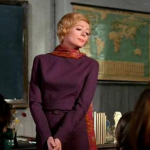 The final teacher on our list, and the second to be portrayed in film by the incomparable Maggie Smith, is the intoxicating Miss Jean Brodie. Charismatic and whimsical, Jean’s initially charming demeanor and close relationship with her pupils becomes increasingly murky, as a love affair leaves her and her star pupils embroiled in scandal. When one of her girls betrays her, Miss Brodie is left unable to understand how her sway over the girls became quite so toxic. Alas, poor Miss Brodie, she educated a little too close to the sun.

Which is YOUR favourite of all the teachers on this list?

BIO: Rose Atkinson-Carter is a writer for Reedsy, a marketplace that connects authors with publishing professionals and resources on a wide range of topics, from Amazon self publishing to landing a literary agent.