Is Your Story A Mystery, Horror or Thriller? Here’s How To Tell 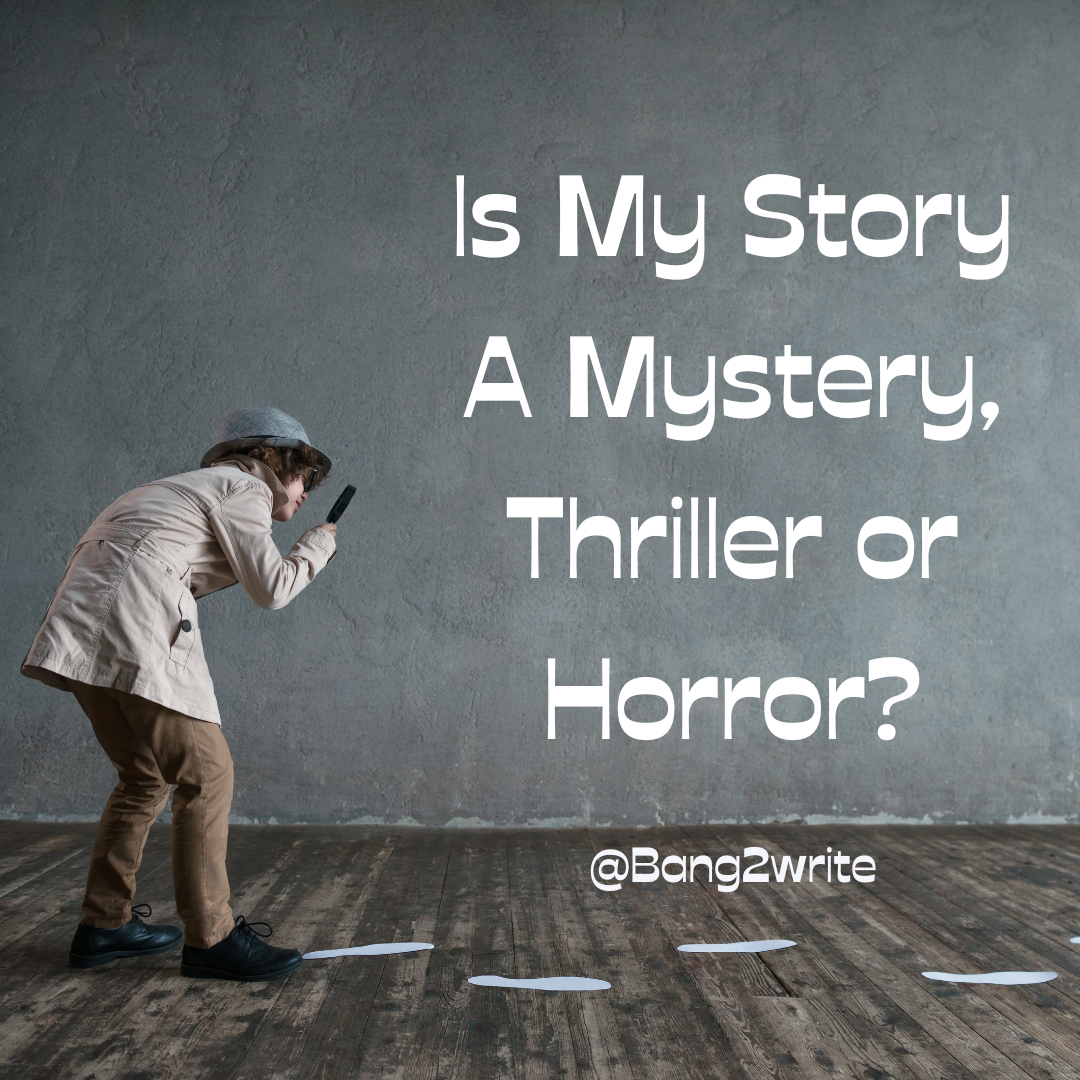 Mystery, Thriller and Horror novels and screenplays do BIG business as they have high ‘adaptability’. Readers and viewers love them … plus there’s a lot of convergence between them. This is because the Mystery, Horror and Thriller genres have lots of elements that cross over.

However, lots of writers run into trouble because they’re not really sure what their story *is* at foundation level. Whilst many writers know mystery usually involves some kind of twist, they often don’t know how to get there. As a result, writers may make their mystery too easy to guess, or too difficult so the twist comes out of nowhere.

Just as many writers believe Thriller and Horror are more or less ‘the same’. Nothing can be further from the truth. That’s why I wrote THIS POPULAR CASE STUDY on B2W comparing the two genres.

In this post I am going to put the mystery, thriller and Horror genres under the microscope. Ready? Let’s go …

I had one of those English Literature teachers who’d bellow ‘To know a word is to define a word!’ This means I always look first at the dictionary. Here’s what it says about mystery:

A novel, play, or film dealing with a puzzling crime, especially a murder.

This is an okay definition. Whilst mystery typically involves a crime – Agatha Christie is STILL the queen of the genre – it’s the ‘puzzling’ nature that is most important.

Typically there will be a BIG REVEAL at the end when the person BEHIND IT ALL is unveiled. Mysteries tend to be cerebral on this basis. 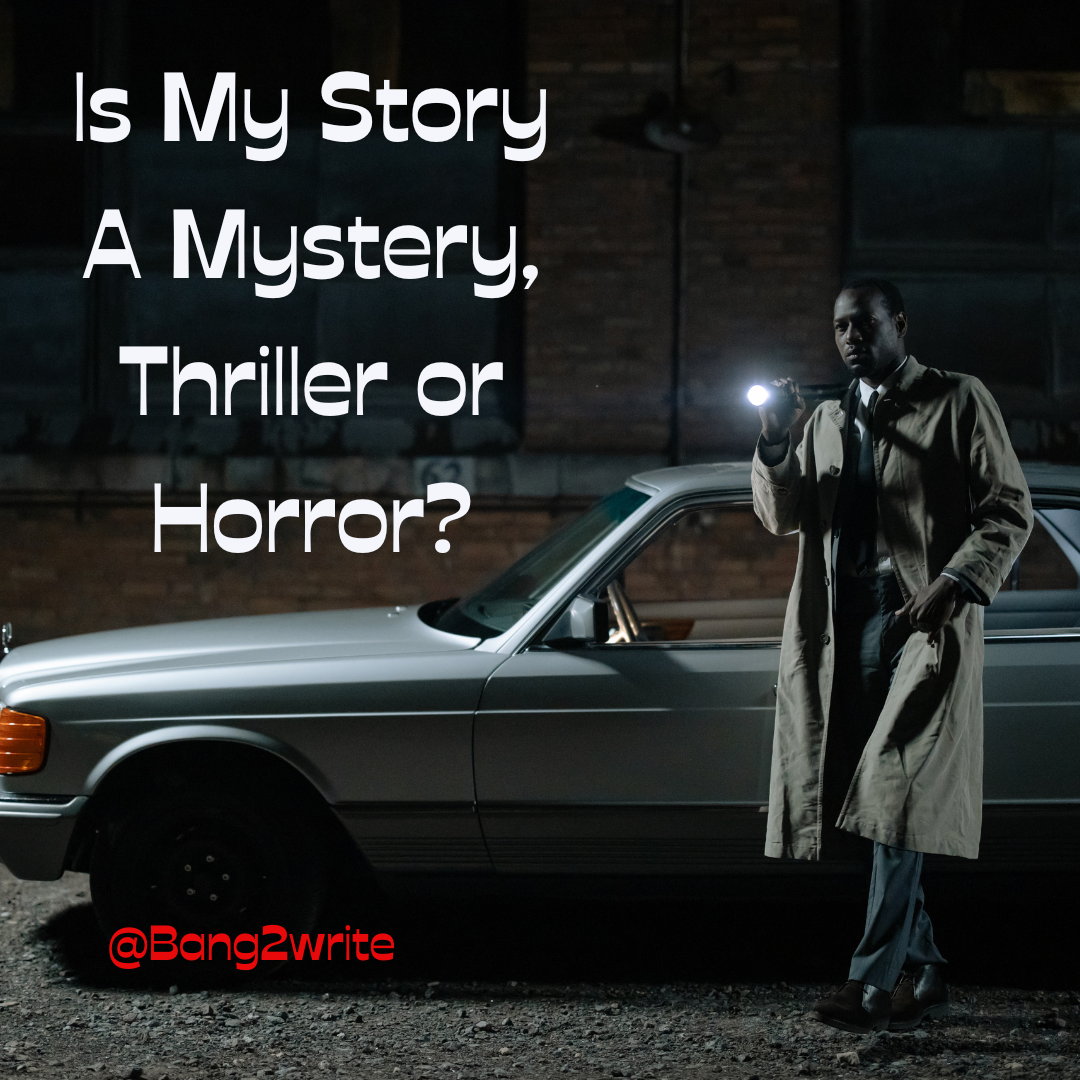 a novel, play, or film with an exciting plot, typically involving crime or espionage.

“a tense thriller about a diamond heist that goes badly wrong”

This is less illuminating. After all, mystery can involve crime or espionage too … Plus there’s lots of thrillers that do neither of these things. Now what??

Wait! The keyword in this definition is ‘exciting’. As the name ‘thriller’ suggests, our story just needs to THRILL. This usually happens with some kind of deadline as a ‘race against time’: a chase, if you will.

In contrast to the Horror, the Thriller invites the viewer to put themselves in the protagonist’s place. The story will ask, ‘What would YOU do?’.

*Something* is happening – but the characters in the centre often don’t know exactly what and/or why. They will chase after this mystery in order to solve it – whether it’s a conspiracy, a supernatural occurrence, an abduction or something else.

Thrillers typically relate to a more intellectual fear most of us have, such as our children being kidnapped; of abduction/being held hostage; of living in an unsafe home; having our identities stolen; being watched or persecuted in some way; of authorities who cannot be trusted, such as governments, teachers or medical staff. This is why the lone protagonist in Thriller is so popular.

Here’s what the dictionary says about this one:

a literary or film genre concerned with arousing feelings of horror.

In other words, we want to be SCARED by Horror. That tracks! So far, so good.

Horrors tend to lay out the potential threat from the beginning: a creature, a serial killer, a haunted house etc. This means in a Horror we are principally VOYEURS. We sign up to watch terrible things happen to people.

But even in less grotesquely flamboyant horror, the story will relate to a cultural, base fear most of us have.

Fears for our children (especially them dying); of being taken away/sent into a hell-like place; or of being out of control; about sex, rape, pregnancy or other violations; of being eaten alive, being dismembered, or burned alive.

What’s more, these types of story feel unstable and makes us worry FOR the characters in it … And yes, maybe even freak out when said characters are attacked and/or killed. This is why groups of characters picked off one by one can be so popular in horror stories.

So what’s the breakdown here? 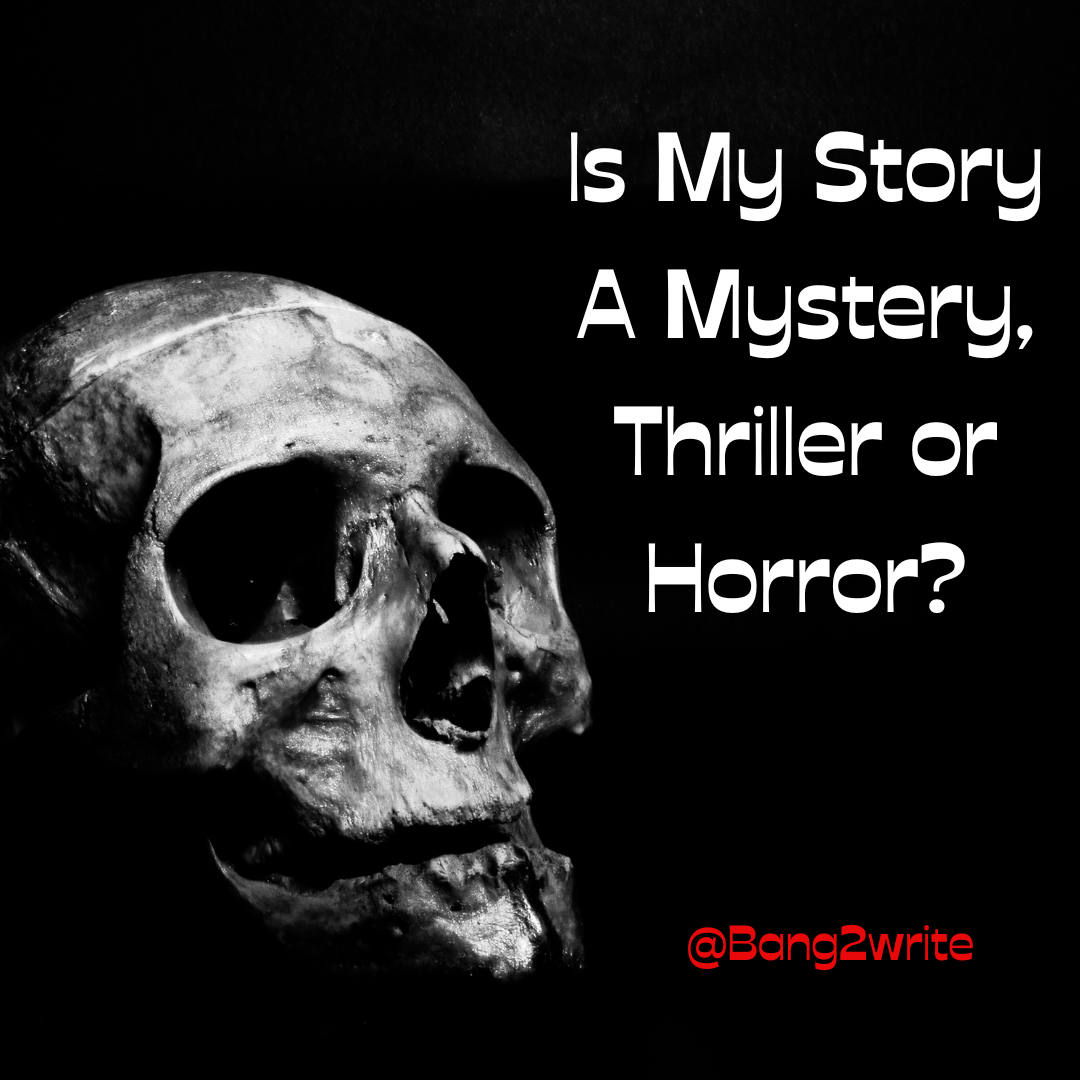 ‘… Do I want to keep my antagonist hidden until the ending or not?’

If you don’t want to keep the antagonist hidden, you’re probably writing a horror. This is because you need to establish the threat from the outset.

If you DO want to keep your antagonist hidden for that BIG REVEAL, then you’re probably writing a mystery or thriller.

(Of course this will depend on the story, we’re talking generalisations here … but from my work with writers, it’s surprising how often this question works!).

So, if you’re writing a Horror, obviously your novel needs to be scary. A good way of studying the conventions of Horror is by considering why your favourite Horror novels scared *you*.

In my case, Heart-Shaped Box by Joe Hill scared me so much it took me a whopping three weeks to read it because I kept getting creeped out!

The story of a washed-up rock star who buys a ghost on the internet he then can’t get rid of, the threat in Heart-Shaped Box is established early on. Hill piles of dread by the ton, making even the smallest moments seem frightening. As the chapters build towards a bloody, crescendo ending, we can’t be sure anyone will get out alive.

If you’re writing a thriller or mystery, it’s slightly different. Personally, I favour mystery elements in Thriller (if not a full-blown mystery) because I love twists. This may – or may not – feed your BIG REVEAL, it’s up to you.

But if you’re hiding your antagonist’s true intentions, you need to be careful. One of the biggest issues B2W sees when writers try this is they hold the antagonist back BUT don’t replace that role function with another. This then means there’s a big fat hole where ‘nothing happens’.

Devices such as red herrings, misdirection, working theories, a stooge antagonist, etc will help you write a satisfying plot AND compelling characters in your thriller or mystery/

In other words, stuff that **stands in for the perp** … ’til we get to the actual perp.

You can do this no matter what genre or type of story you are writing. Immerse yourself in the mystery genre via mystery novels, movies & police procedurals to guide you.

‘Each genre hits a different part of your anatomy. Mystery: your brain because it goes into overdrive. Thriller: your heart because it beats faster. Horror: your intestines because you s*** yourself. You’re welcome!’

previousWriters Ask: What Does ‘Authenticity’ Really Mean, Anyway?
nextTop 10 Tips To Get Your Writing Out There