5 Examples of Story Structure You Should Know About 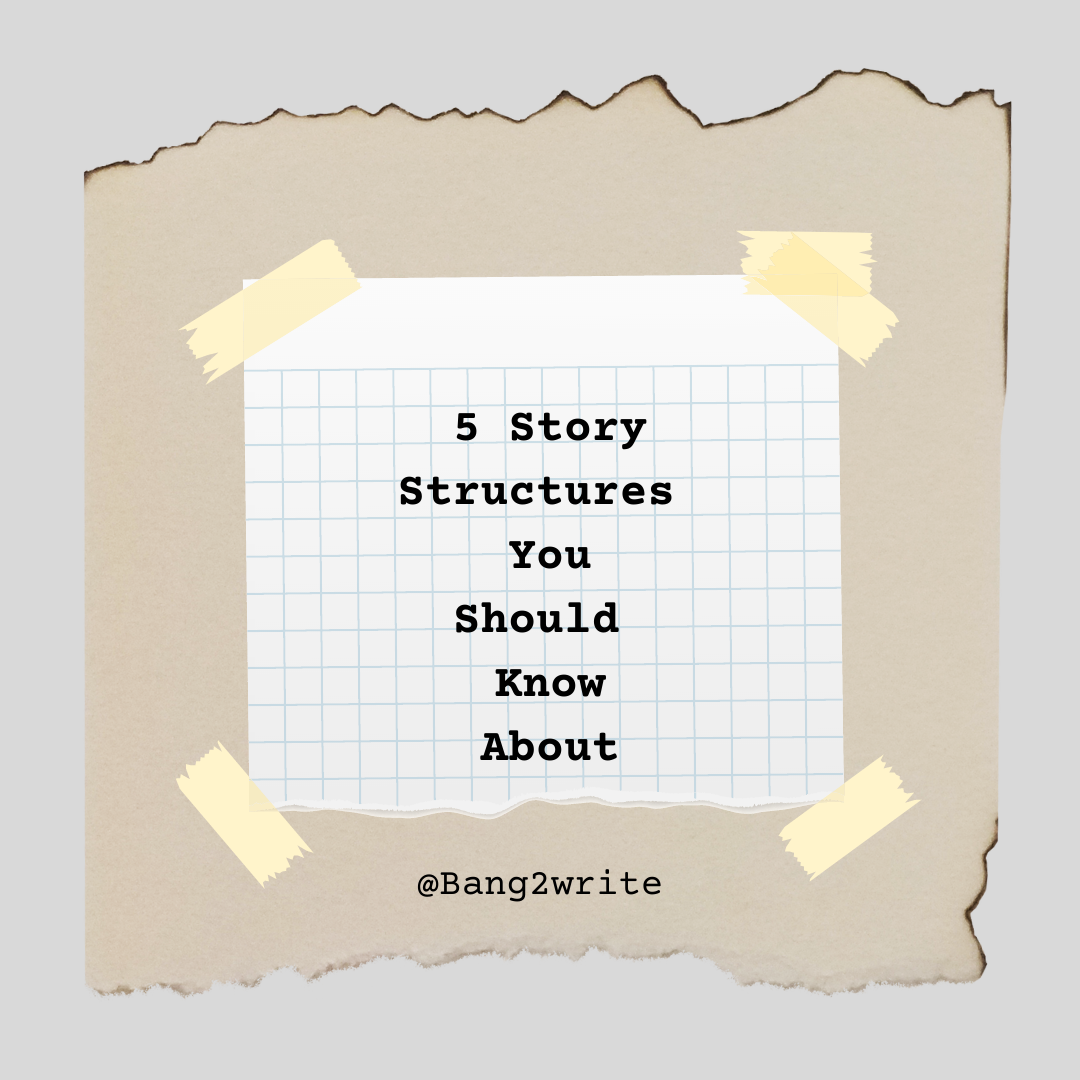 All About Story Structure

Whether you’re writing a novel or screenplay, story structure matters. Building a story structure is like crafting a backbone for your narrative. It helps the audience understand the timeline and meaning of each event, keeping them engaged until the very end.

All too often writers focus solely on describing their characters rather than the story’s overall architecture. This has a knock-on effect and an under-developed story structure can literally ruin your characterisation.

The truth is that plot building is just as important, if not more, than the protagonist’s quirks and conflicts. So you’ll need to become an expert at story structure to truly capture the hearts of readers (and publishers).

The good news is that you can fit many stories into just a few tried-and-tested templates. Most stories share certain common elements or ‘beats’. These include the status quo, inciting incident, rising action, climax, and resolution … But they differ in how they’re knitted together.

With that in mind, let’s explore five of the most popular story structures you can use to outline your story. Let’s go!

The Hero’s Journey, also known as the monomyth, is a story structure as old as mythology. One that likely finds its origins in the oral tradition, spoken around campfires. We can read about it in professor Joseph Campbell’s 1949 book The Hero with a Thousand Faces.

In a nutshell, it’s the story of a hero who departs from a familiar environment and sets foot into uncharted lands. After overcoming internal and external adversities, they use what they’ve learned to triumph and return home as a changed person.

You can recognise this pattern in blockbuster movies like Star Wars, The Lord of The Rings, The Matrix, and countless other stories across cultures and mediums. It’s so fundamental to storytelling that you can clearly see it’s influenced the other structures mentioned in this post. 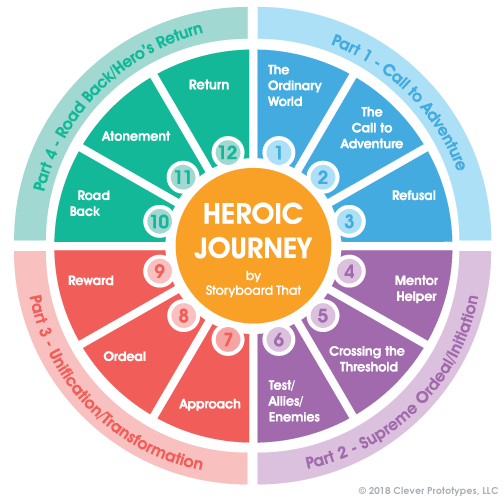 Campbell’s initial seventeen-step structure has since been distilled down to twelve steps by screenwriter Christopher Vogler.

The Three Act Structure is similarly widely recognised and used, especially in screenwriting. It’s divided, as the name suggests, into three acts: beginning, middle, and end.

However, each act differs in length, with the second being the longest, making up two-thirds of the story. 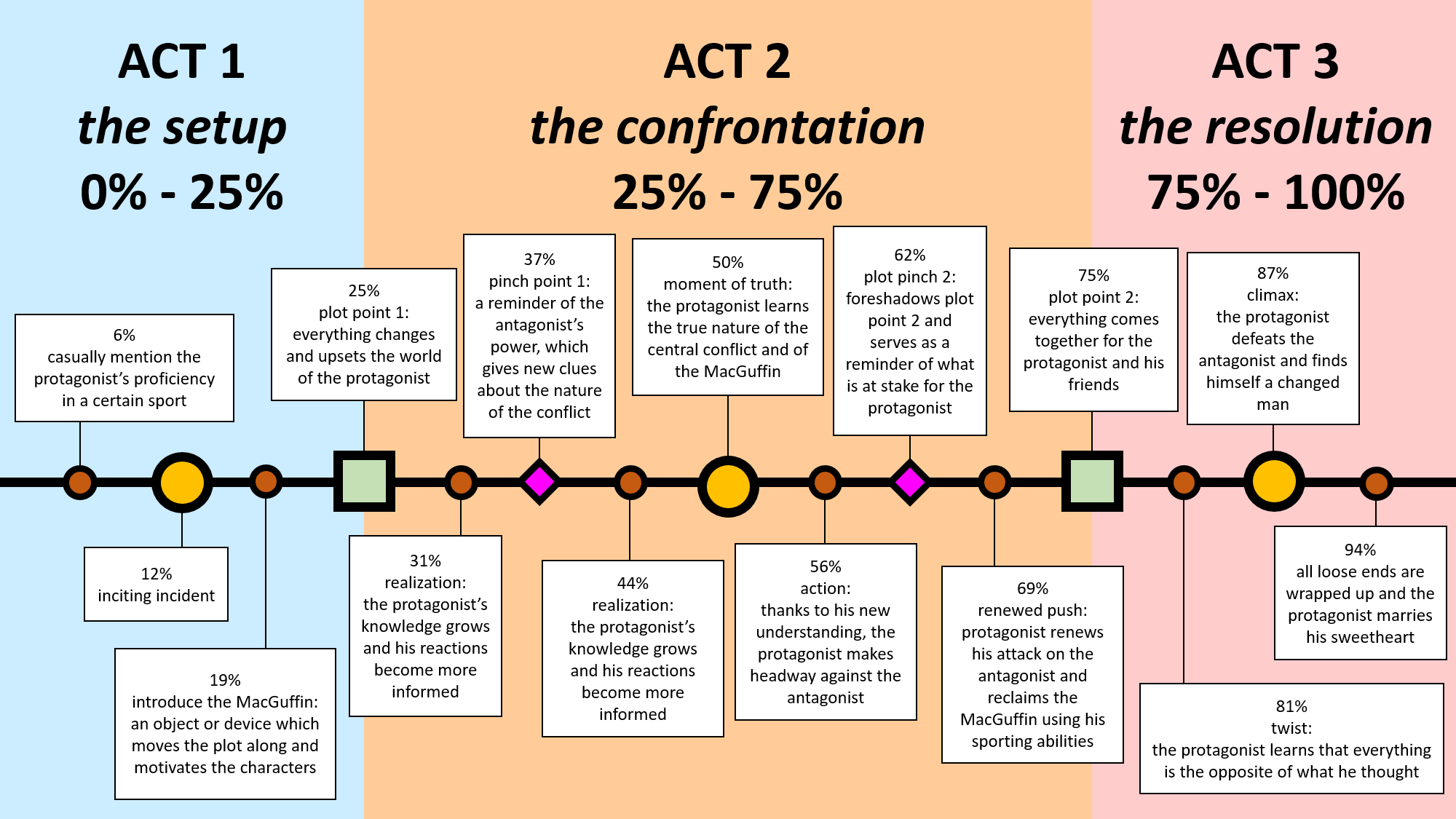 Act Two is where most of the story happens. Antagonists and mentors enter the scene, the tension builds, and the protagonist faces increasing difficulties. We witness how they adapt to new environments, first tentatively and reluctantly, then more confidently and intentionally. It’s also where major crises happen, pushing the protagonist to a place where they no longer believe they can triumph — where they question why they accepted the quest, and if they have the strength to continue.

Act Three is where the final battle happens: the enemy displays all their power, forcing the protagonist to prove their skills, intelligence, and courage to win. It’s the climax of the story, after which the protagonist heals their wounds and returns home a changed person. In this act, the author should fulfil any promises made earlier on, and tie up any loose ends.

The Three Act Structure’s simple framework is ideal to help writers keep everything together and avoid losing sight of their story’s evolution. Pro-tip: it’s particularly beneficial for first-time authors outlining their first book! 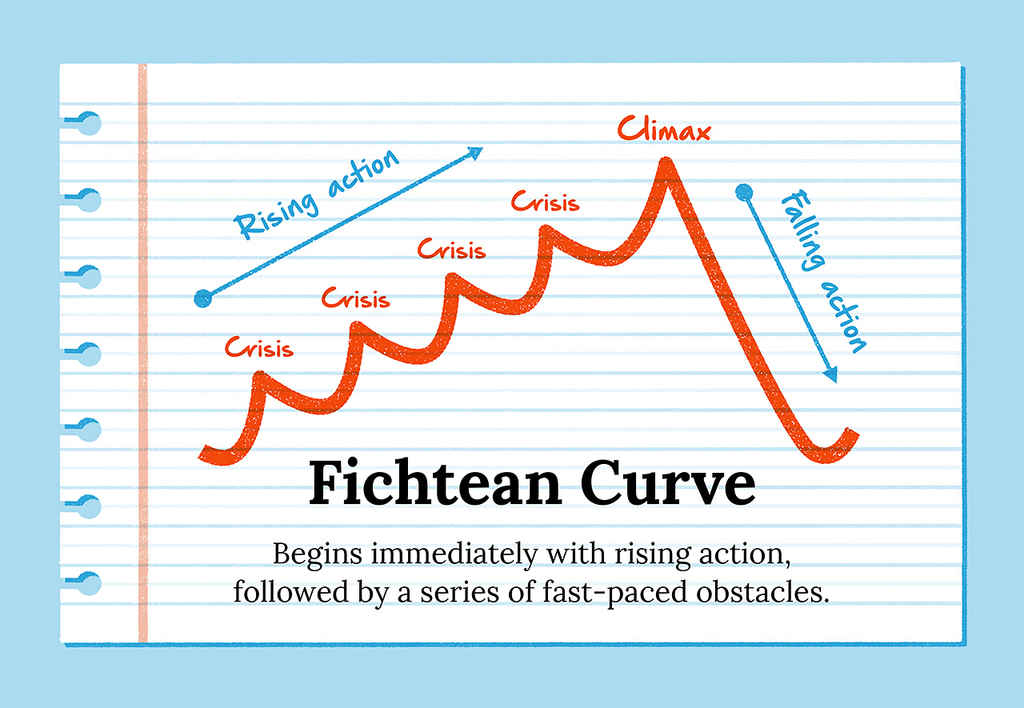 Popularised by the prolific writer John Gardner, The Fichtean Curve consists of three acts. These are rising action, climax, and falling action, but the action is immediate, unlike other story structures.

This type of structure is particularly suited for mystery or espionage stories or blockbuster movies. The protagonists are thrown into trouble from the start. They faceincreasingly difficult ordeals to achieve their goals, like escaping from a country, à la Jason Bourne, or solving a crime, like in Agatha Christie’s Poirot novels.

The context of the story, as well as the setting and character development, are revealed “on the go”. This is an ideal structure to highlight a character’s personality through their decision-making.

Eventually, the protagonist reaches an ultimate ‘make or break’ challenge. Whether or not they succeed, the falling action sees the characters return to life with a new perspective, and the moral of the story becomes evident.

The Fichtean Curve is a simple template, packing action and tension in equal measure, to keep readers sitting on the edge of their seat all the way through. 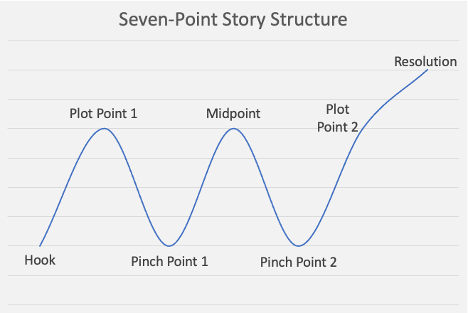 Though the Seven-Point story structure is a relatively new addition, only recently being popularized by sci-fi author Dan Wells.

The crux of this structure is that you can plot your story backwards by starting with the resolution. Here’s how it works:

Determine how you want the story to end for the main character.

Start the story in an opposite situation to where you see it ending, meaning that the character will have to go through a transformation.

Determine the midpoint, where the character goes from being reactive to proactive in solving their challenge. Usually, this is when they pay a high price for a small win.

Create a catalyst to shake your character out of their comfort zone.

Create another catalyst of action after the midpoint. This time though, they act willingly and spontaneously using all their skills and resources.

Make the story more exciting, increasing the tension through new challenges and antagonists.

Finally, write the ultimate test for your character! The “all is lost moment” describes when they are forced to do something incredible to solve their problem.

By working out your plot symmetrically, you can break up linear thinking and avoid the infamous writer’s block. Many authors find this especially useful when they have in mind a character or voice, but not the journey afterwards.

Save the Cat was laid out by screenwriter and author Blake Snyder. The template has been criticised for being too Hollywood-oriented, but it has proven helpful for screenwriters and authors alike.

This story structure is built on a “beat sheet”, which outlines fifteen story sections, divided into three main acts. Snyder assigned each section a set number of pages to match the average 110-page screenplay.

The first act introduces the main character, the story’s primary theme, and the inciting incident.

The second act is where most of the story happens. The hero acts to overcome a challenge, and meets someone important along the way (via subplot). After a rewarding moment things get worse and the hero hits rock bottom.

The third act is where the story wraps up, the hero finds a way to overcome the challenge and the dust settles.

Snyder’s template is ideal for writers who struggle with the middle section of their novel, focusing too much on set-up and resolution. By providing a detailed framework, including how long each part should last, the Save the Cat structure helps writers to remain focused on what is essential to the story.

Story structure is not meant to dictate your novel’s content with an iron fist. They’re a great foundation through which your story can flourish. Even the most prolific authors use them to write faster, leverage timeless storytelling elements, and draw their readers into their narratives. I hope this article will help you craft your own powerful stories.

BIO: Rose Atkinson-Carter is a writer with Reedsy, a marketplace that connects authors with self-publishing resources and professionals like editors, designers, and ghostwriters. She lives in London.