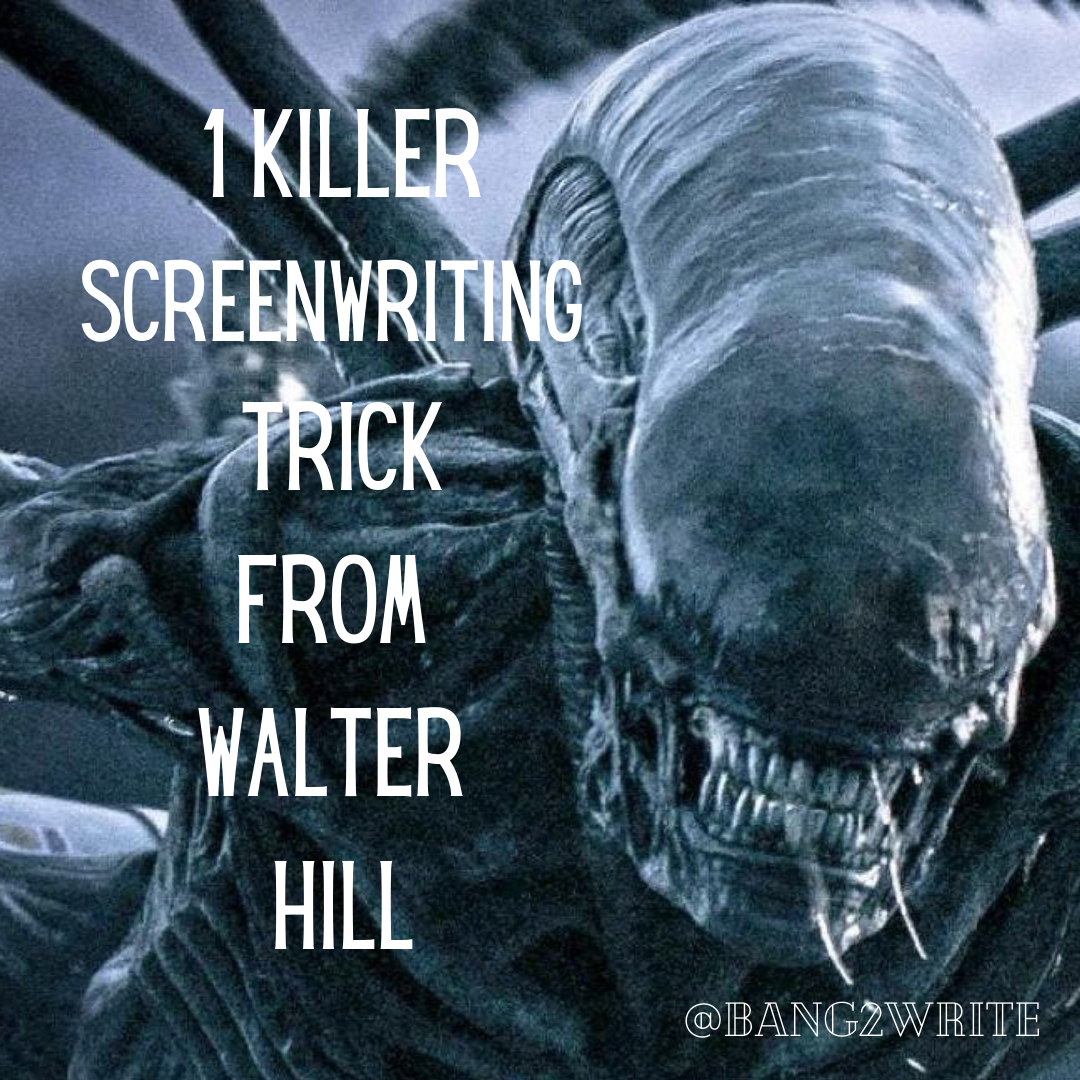 Walter Hill is a director, screenwriter and producer with a super-shiny resumé. He is the writer-director of the classic gang warfare movie The Warriors, an adaptation of the novel by Sol Yurick.

Known primarily for the action genre, Hill has worked with all kinds of Hollywood royalty such as Arnold Schwarzenegger (Red Heat); Eddie Murphy (48 Hours and Another 48 Hours); Sylvester Stallone and Jason Momoa (Bullet to The Head); and even Steve McQueen and Sam Peckinpah (Hardboiled crime author Jim Thompson’s The Getaway).

But even with all that in mind, Hill is perhaps most famous for producing the Alien Films. He’s had a role on nearly every Alien movie to date, from the first through Alien Resurrection, Alien Versus Predator, Prometheus and Alien: Covenant.

Though Hill is (rightly) celebrated for writing Alien, he was actually uncredited. His style of writing is very sparse and is sometimes called ‘vertical writing’. This basically refers to the notion of including LOTS of white space in your scene description.

Here’s Hill himself on his vertical writing style …

“I tried to write in an extremely spare, almost haiku style, both stage directions and dialogue. Some of it was a bit pretentious — but at other times I thought it worked pretty well.”

The problem with most spec scripts?

‘Too much black on the page’ when it comes to scene description or chains and chains of dialogue. Sometimes both! This is why Hill’s screenplay for ALIEN is SO illuminating for screenwriters.

Check out the very first page below. As you can see, there are NO camera angles, asides to the reader or anything else that references ‘THIS IS A FILM’. In addition, Hill paints a picture of The Nostromo spaceship for us, inviting us INTO the story. 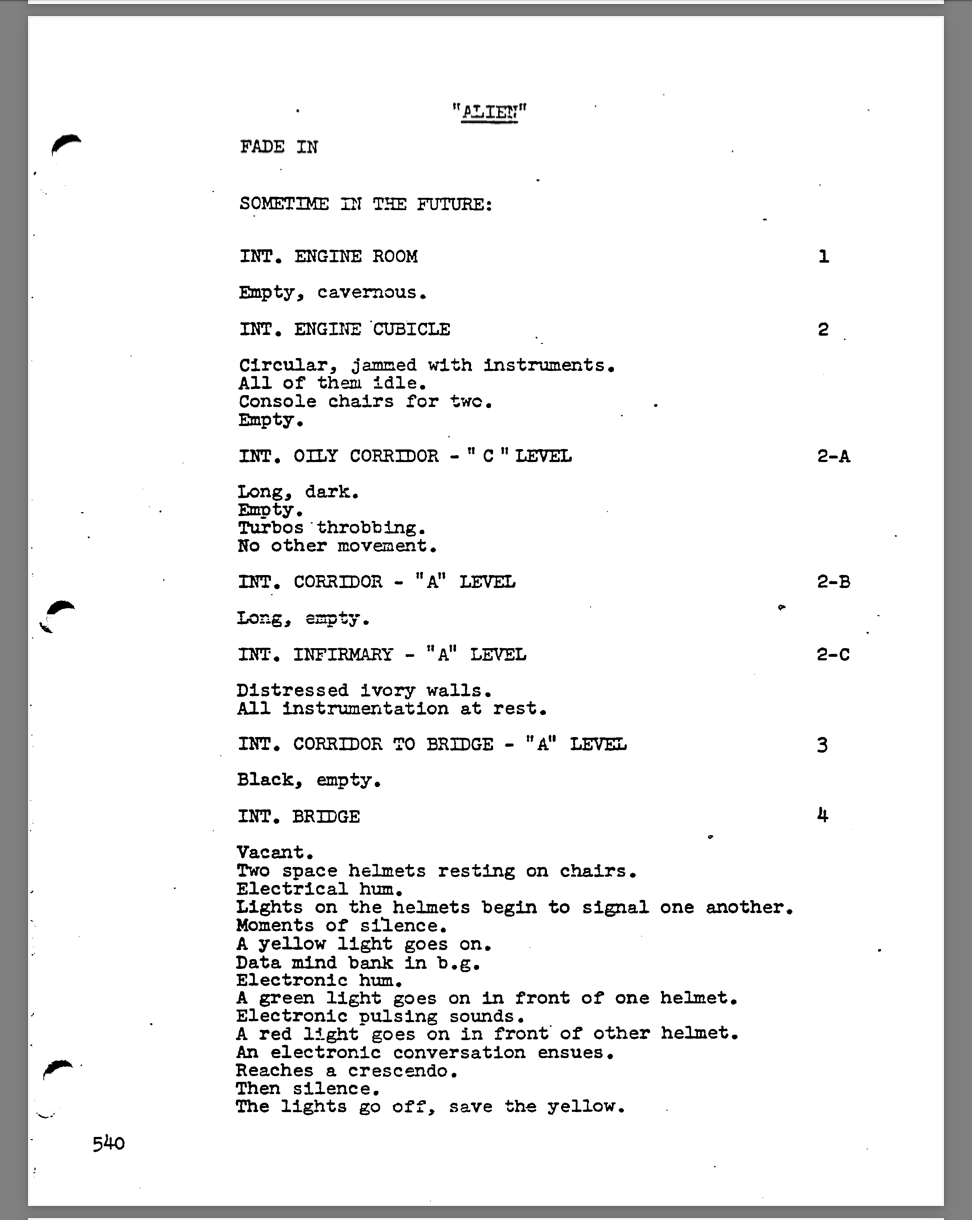 Answer: VISUALS. A small mindset change that makes ALL the difference.

‘Scene description’ has to be one of the biggest misnomers in screenwriting. We’re not supposed to DESCRIBE, we’re supposed to write VISUALS. Describing stuff gives the impression we have to account for every little detail in a scene and nothing can be further from the truth.

Basically, what we should be doing is writing ‘word pictures’. We ‘sum up’ a scene with well-chosen visuals and moments and actions. Alien does this and is well worth learning from. I recommend downloading the PDF of the screenplay today (link below).

No problem – GRAB IT HERE as a PDF from AvP Galaxy.

Take your screenwriting to the next level

Bang2writers have been asking for a no-holds-barred, online and on-demand screenwriting course from B2W (including visual writing!) for a while now … But when I sat down to map it, I soon realised there was too much for just ONE course!

That’s why I present to you two volumes of ‘Screenwriting Essentials’, just $37 each …

Screenwriting Essentials Volume 1. This one’s all about ‘reader proofing’ your screenplay so you can beat the gatekeepers and ensure you don’t fall foul of reader ‘pet peeves’. Grab your best chance of springing out the spec pile!

Screenwriting Essentials, Volume 2.  Producers are always talking about ‘strong voices’ and ‘ones to watch’ … Take your script to the next level by learning all about subtext, storyworld, plot devices and much more.

Can’t decide which one you want?

B2W’s got you covered! Buy both as a bundle HERE. Just click the links or any of the pics in this article for more info. You can also find more help with your scene description after the jump, too. 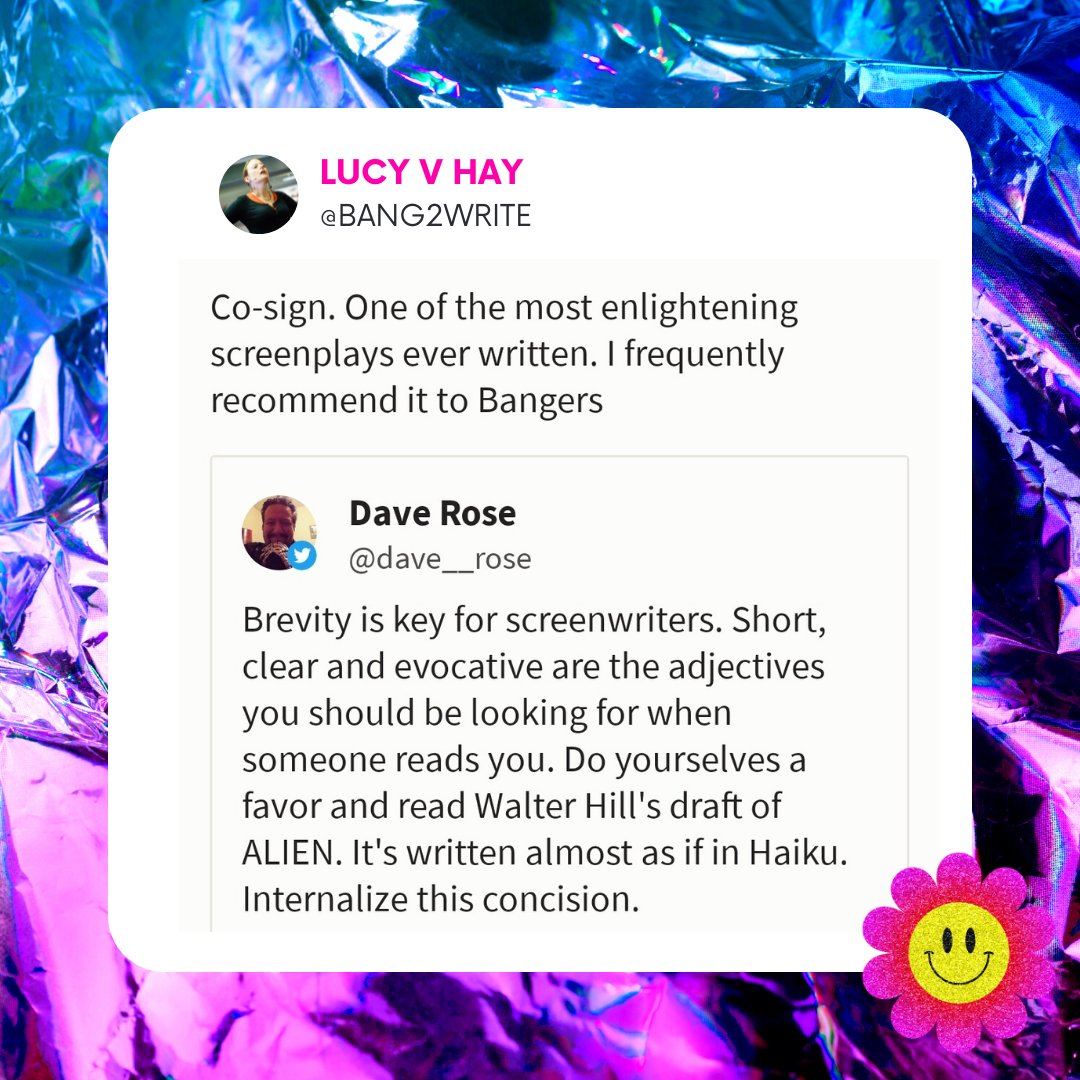 More Links to Help with Your Visuals

1 Wrong Belief That Is Destroying Your Scene Description

10 Ways To Conquer Your Scene Description

previousFREE RESOURCE: The Screenwriter’s Road Map
next5 Examples of Story Structure You Should Know About