Movies Have Always Been ‘Woke’. You Just Didn’t Notice 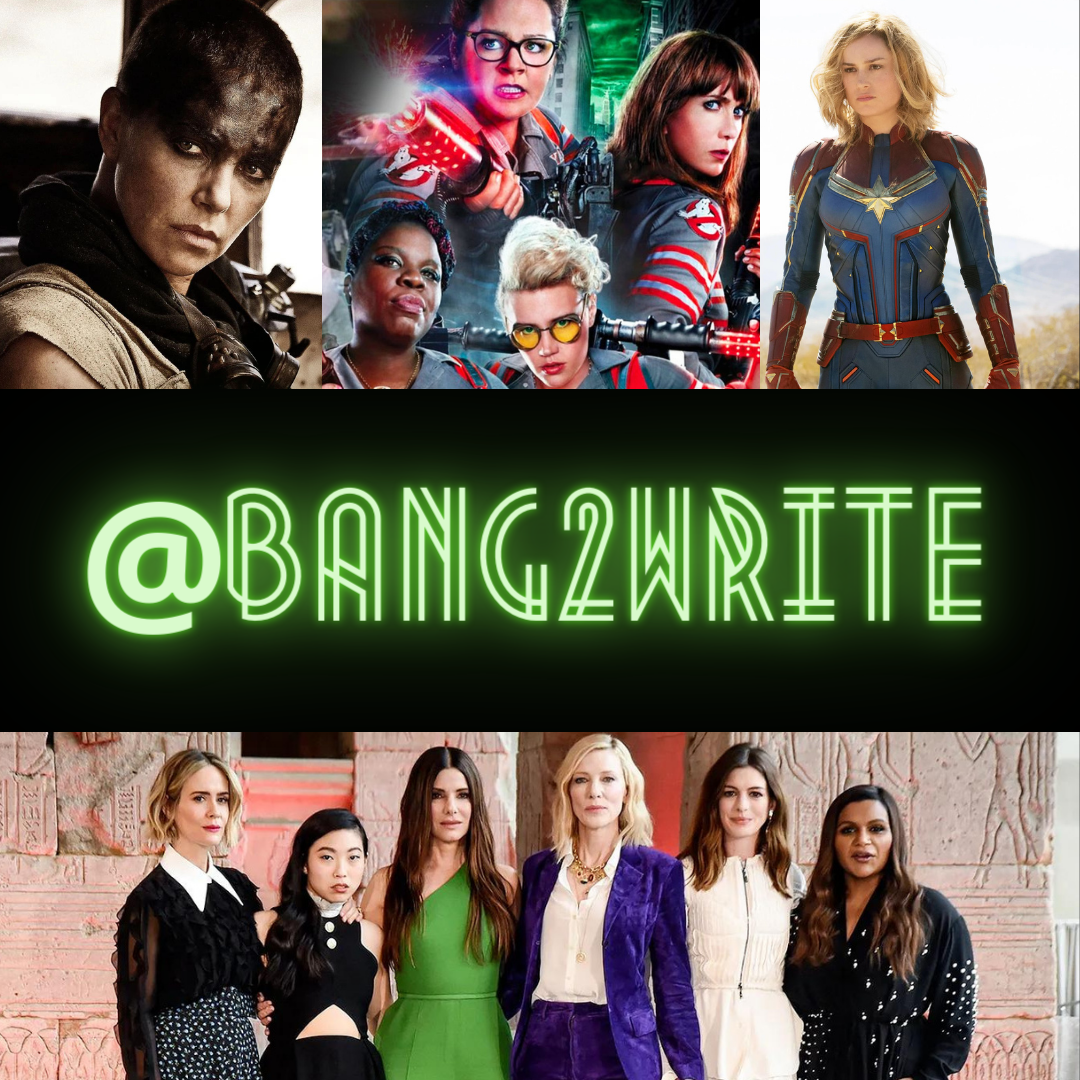 Another week, another message

So, apparently B2W is too ‘woke’ so somebody’s unfollowing … blahblahblah. Seriously, this ain’t an airport, no need to announce your departure!

I do have one query though: WHO THE HELL HAS THIS PERSON BEEN FOLLOWING BEFORE NOW??

This site and its accompanying social media has always placed the ‘woke’ at its heart, FFS. If this was apparently a problem, you gotta wondered why they followed in the first place. But anyway, no skin off B2W’s nose.

Hell, B2W is so ‘woke’ I actually don’t even use the word (except when critiquing Dudeflake BS online). This is because it is an example of cultural appropriation, another phrase that gets the Gammons in a froth.

For those that don’t know, ‘woke’ was appropriated from the black community. Though ‘woke’ appeared back in the 70s, it was first used widely around 2014 and refers to police brutality or unjust police tactics. ‘Stay woke’ was the watchword for activists protesting against the killing of Michael Brown in Ferguson, Missouri.

Added to the dictionary in 2017, ‘woke’ now means ‘being aware… knowing what’s going on in the community (related to racism and social injustice)’. 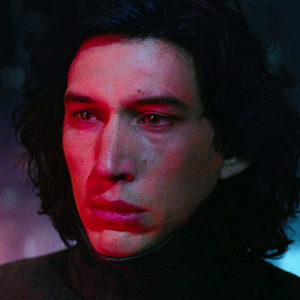 … Now ‘woke’ has been co-opted into the culture wars. Whilst being aware of systemic injustice would seem common sense to probably most people, there are some who use the word in derision. They will mock any attempts to talk about social justice as ‘wokism’.

They may even claim they are being ‘brave’ for doing so, claiming the risk of being ‘cancelled’. (FML).

Such commentators will characterise ‘wokists’ as extremists at worst and people with their knickers in unnecessary knots at best. In the last year alone we have seen non-stop stoking of the culture wars via the derisive use of this word in …

In short, it’s just the updated version of ‘It’s Political correctness gone mad!!!‘ It’s always been this way … it’s just louder now than ever before. That’s ‘cuz there’s more people in the fray, thanks to social media.

It might seem pretty safe to assume that most reasonable people think only JERKS have a problem with movies with female leads. It can seem hard to believe that boycotts and general online-wailing against the movies below have all happened VERY RECENTLY … 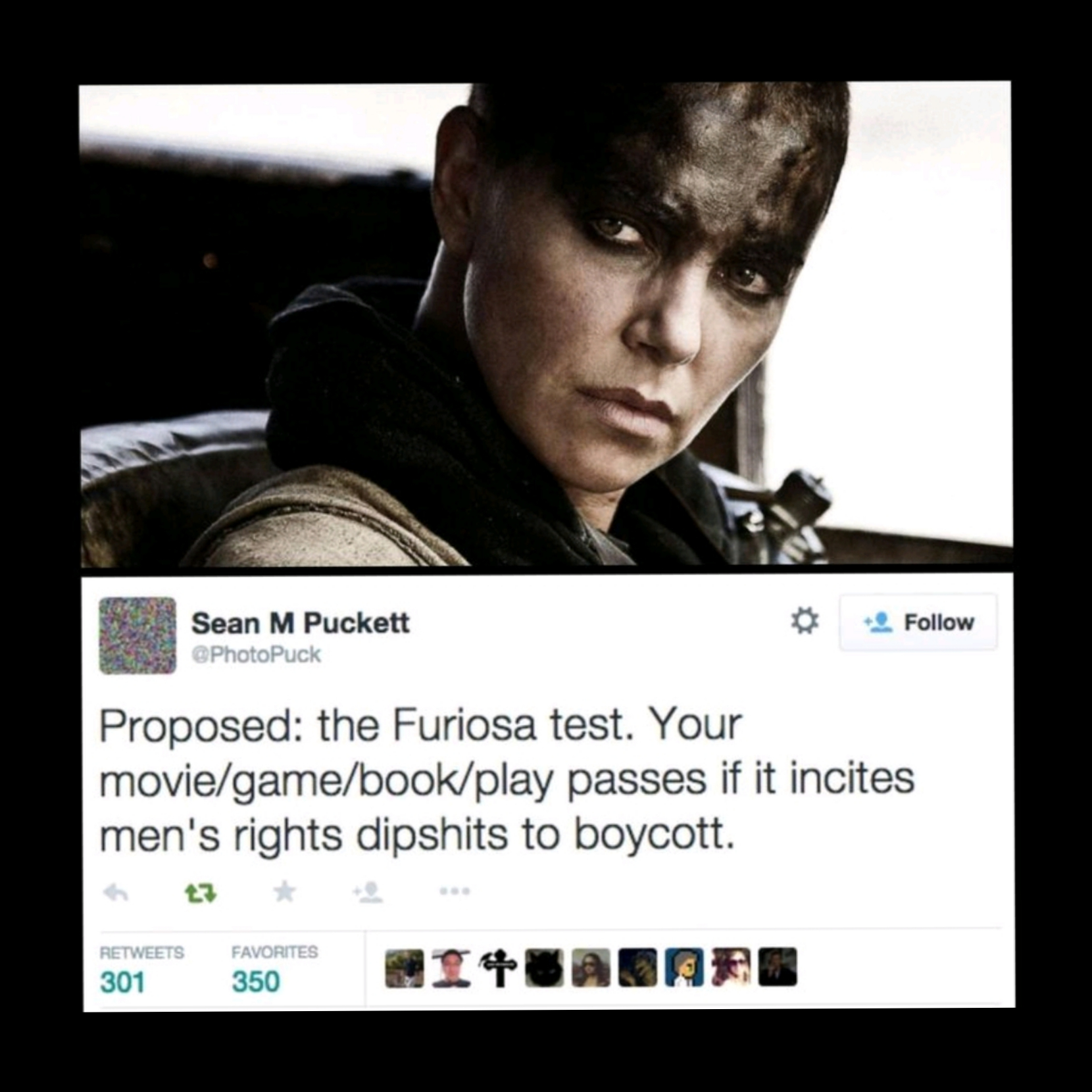 Movies Have Always Been ‘Woke’

What’s particularly puzzling for me about all this drama is movies have ALWAYS been ‘woke’. ALIEN and ALIENS are rightfully revered as classics (despite the notable point against them for Dudeflakes being they have a female lead!).

That said, this little known detail would no doubt have the anti-wokists up in arms if it were made today … That’s right, Lambert is TRANSGENDER!

Now, whether this was James Cameron’s or Ridley Scott’s idea is not clear … Hell it might even have been a rogue worker in the Art Department who was tasked with making the bio below (green type on black). Whatever the case, clearly no one who worked on the franchise had any serious objections.

It doesn’t even matter, anyway. It’s important to remember ALIENS came out over thirty years ago. Lambert’s authentic self is now ‘canon’ as fans say. 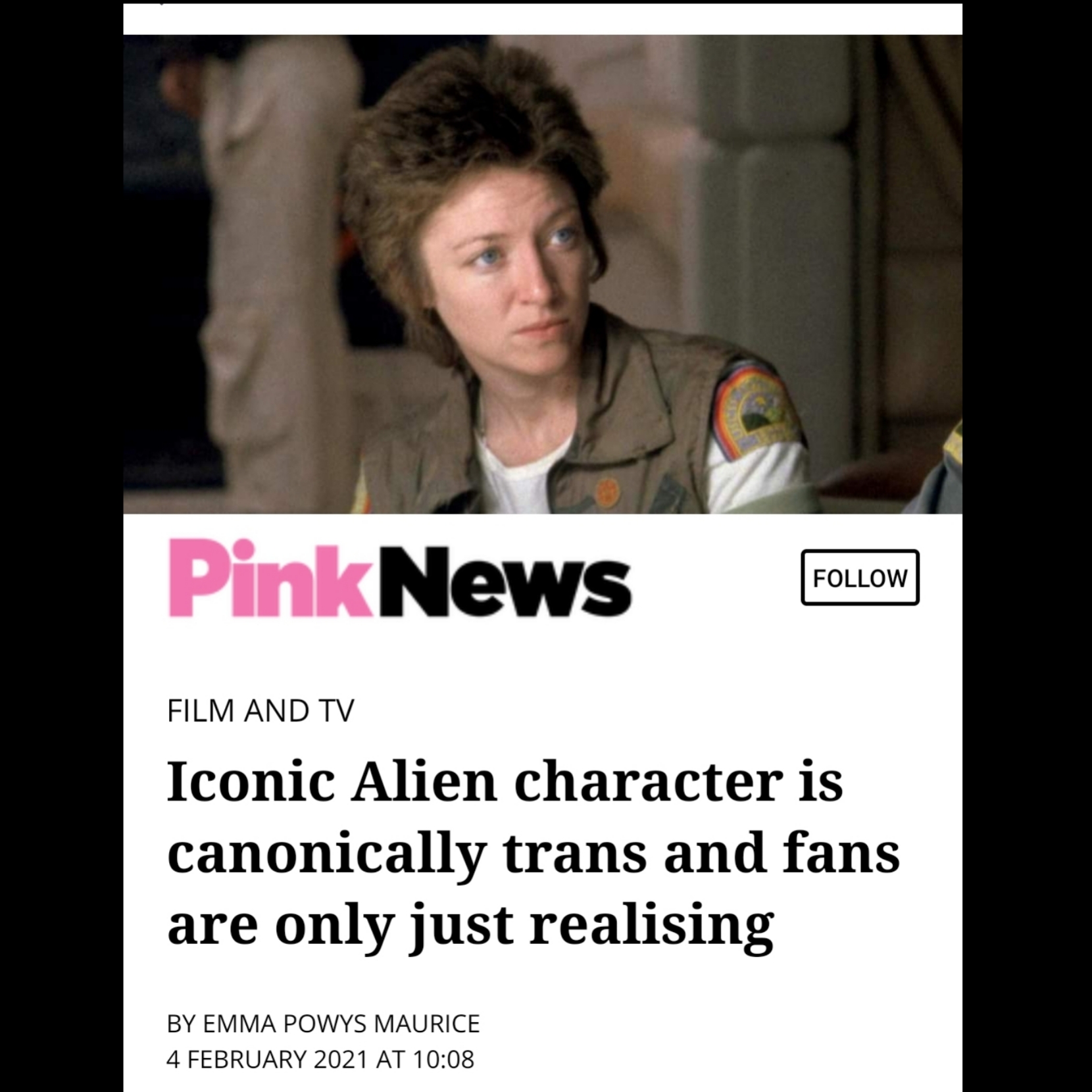 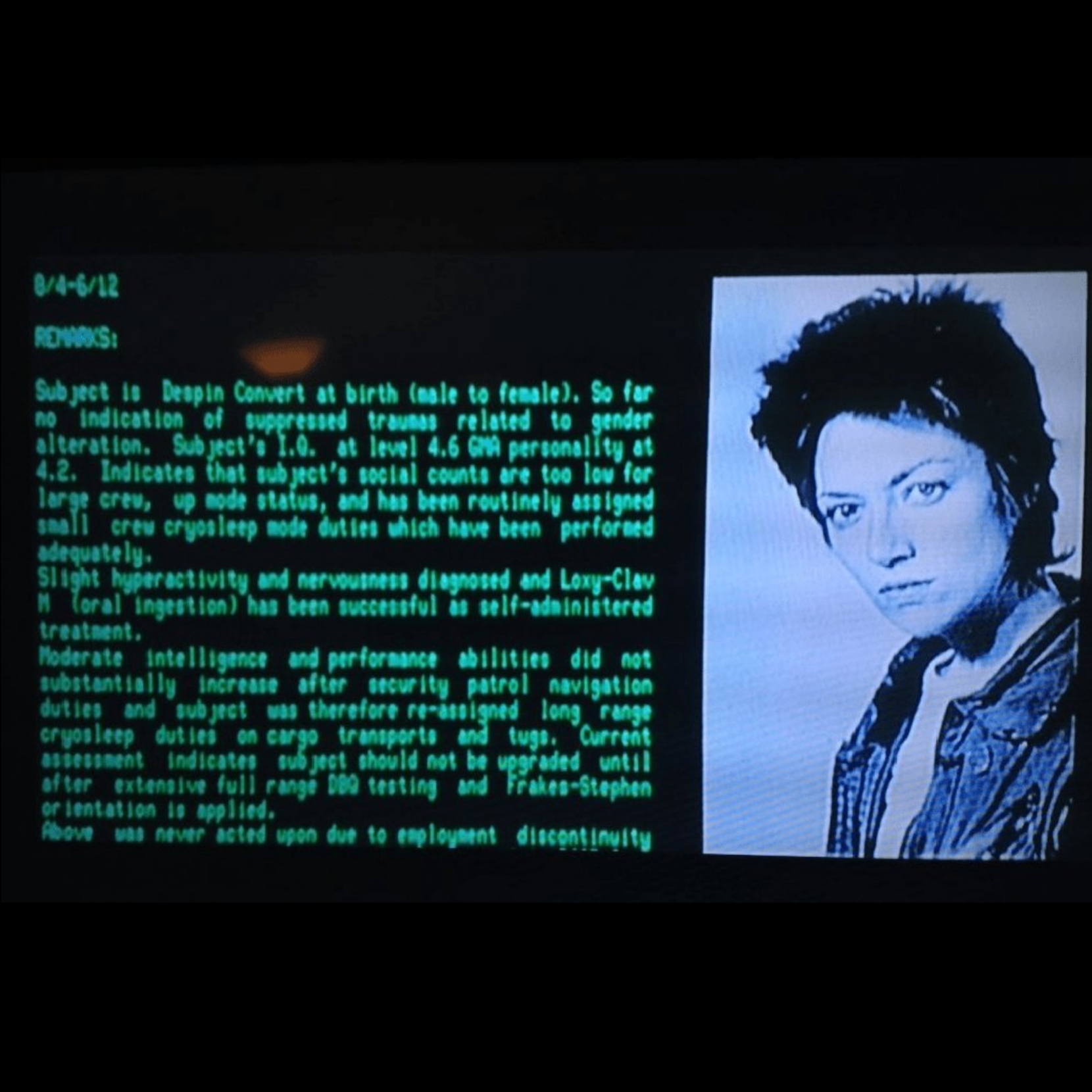 Let’s Not Forget Either …

… Filmmakers like that pesky ‘wokist’ Ridley Scott has been working on movies with progressive values his ENTIRE CAREER.

Whether we like his movies or not (and honestly, I am lukewarm on a fair few of them), there’s no denying the thematics of his back catalogue over the last four decades. From Alien through to Thelma and Louise and Calamity Jane, Gladiator, Prometheus and Alien: Covenant he has sold his stories on the basis of progressive values my entire lifetime.

He’s done this by choosing stories that centre female leads, characters of colour and thematics wherever possible, pushing back against the status quo. He did this even when it was just not ‘done’. He didn’t care, that’s always been his thing. What’s more, contacts of mine who’ve worked with him confirm that yes, he believes these things and does it consciously.

So it should surprise absolutely NOBODY that in 2021, aged a whopping 83 years old, Ridley Scott is STILL doing these things!

His latest film, The Last Duel, centres thematics about consent. Though set in medieval times, this is a relevant conversation that still needs to be had, even (especially?) in the post #MeToo era.

The (Almost) Unique Position of Blockbusters

I think Scott is BANG ON below when he says blockbusters can advance the cause of feminism, ‘little by little’. Blockbusters are unique in that they can not only reach mass audiences, they hit multiple generations concurrently. (Whilst it’s true some TV series do this too such as Stranger Things or The Simpsons, it’s not the standard).

These days blockbusters are designed for that elusive ‘four quadrants’ of target audience – young, old, male, female. As a result their thematics’ potential impact is undeniable.

That said, the nature of thematics being what they are, said impact can only ever by cumulative. It’s incredibly rare a single movie captures popular consciousness SO MUCH it flips everything we know (or think we know) on its head.

Even so, the Dudeflakes going postal about ‘wokism’ feel undeniably threatened by blockbuster movies today. They will claim ‘wokism’ is ‘unpopular’ even in the face of literal evidence … including takings of millions (and even billions of dollars at the box office) or articles like this one tracing thematics back DECADES.

Hell, these fragile fools will even pop up in threads where hundreds of fans are literally going on about how much they love a movie’s message and why.  Bizarre. 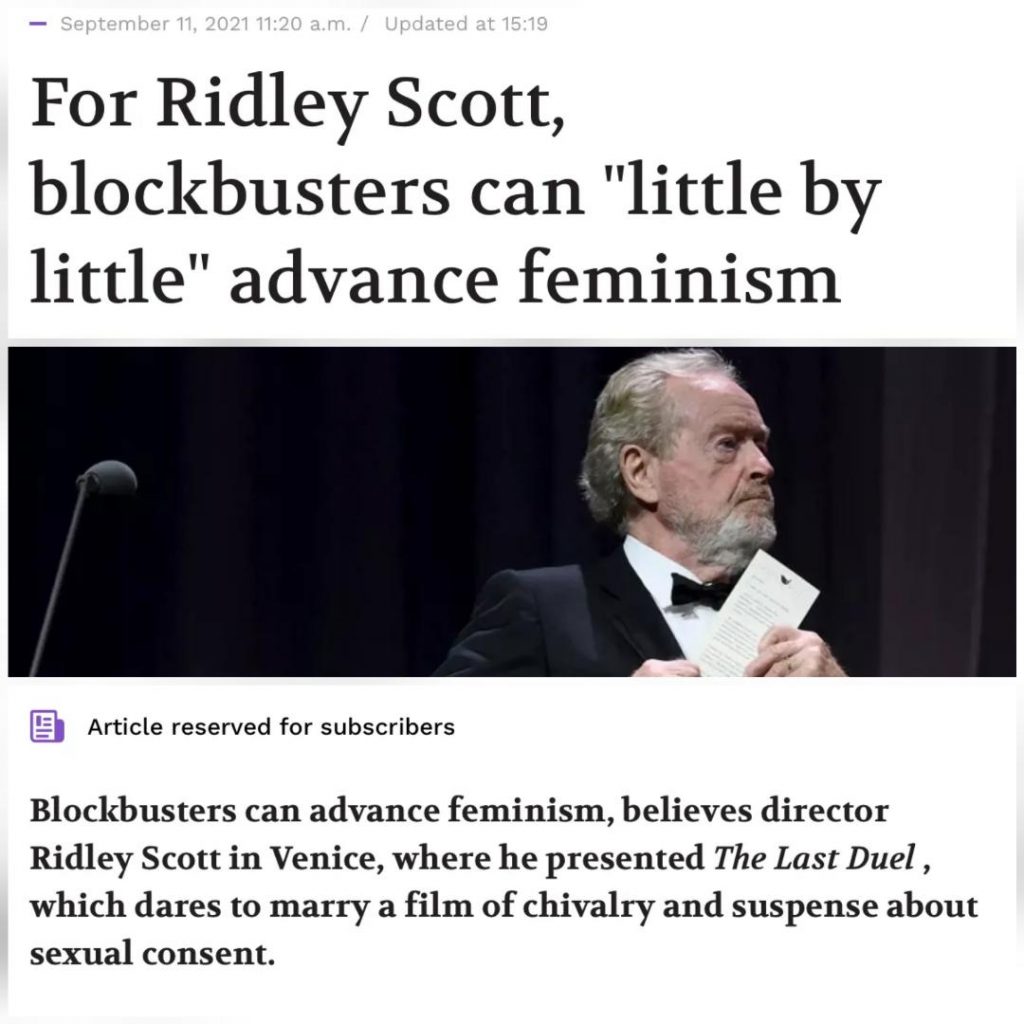 For God’s sake, most stories  – especially comic books and blockbusters, not to mention **comic book blockbuster movies**! – have traded on the classic idea of ‘Good Versus Evil’.

Yet somehow, even a property dating back decades called CAPTAIN AMERICA was apparently not overt enough in its political nature until now, the 2020s??

Fact is, the evidence is clear Marvel has always been ‘woke’. You don’t have to be a fan to know Stan Lee and Jack Kirby designed Captain America as direct and very obvious pushback against Nazism. 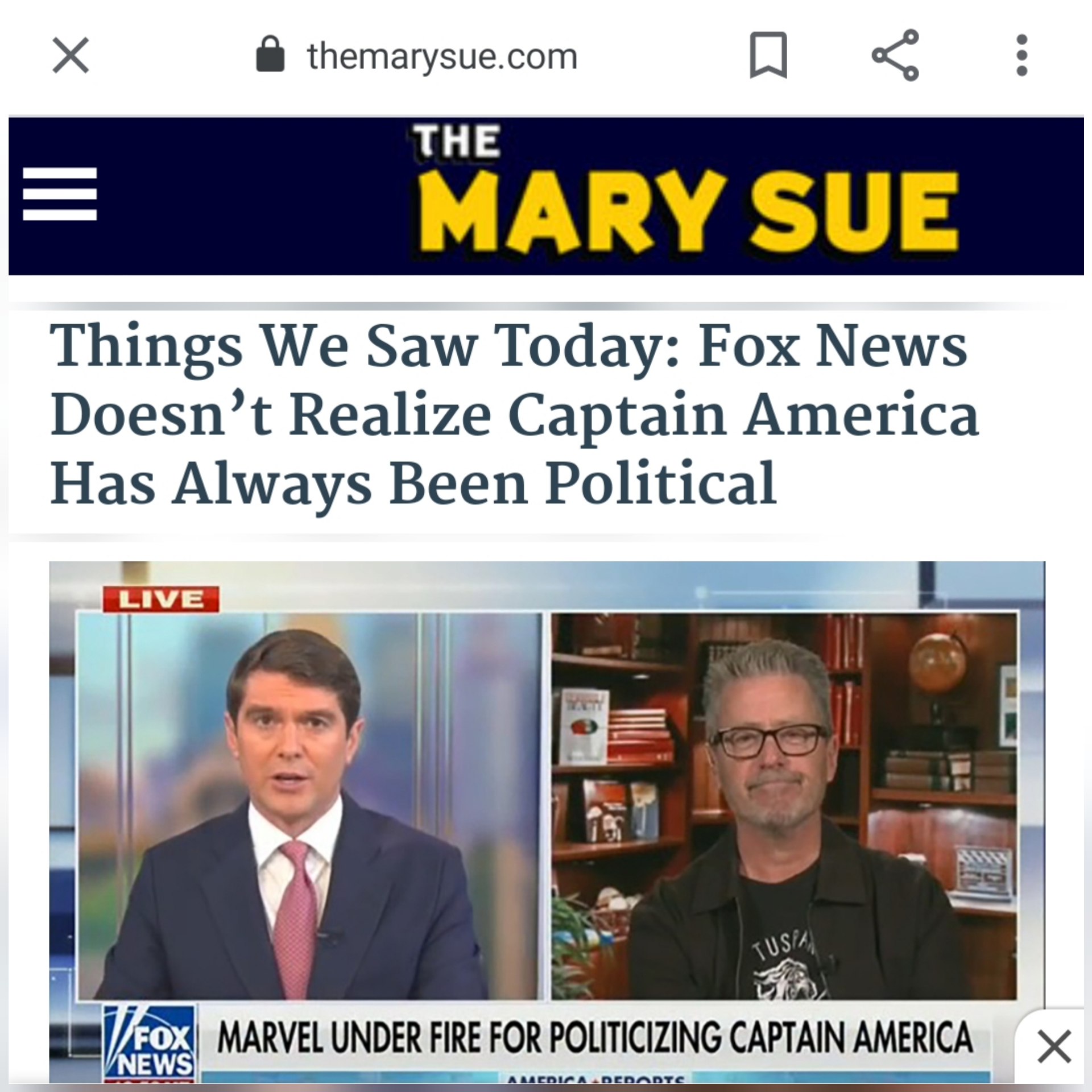 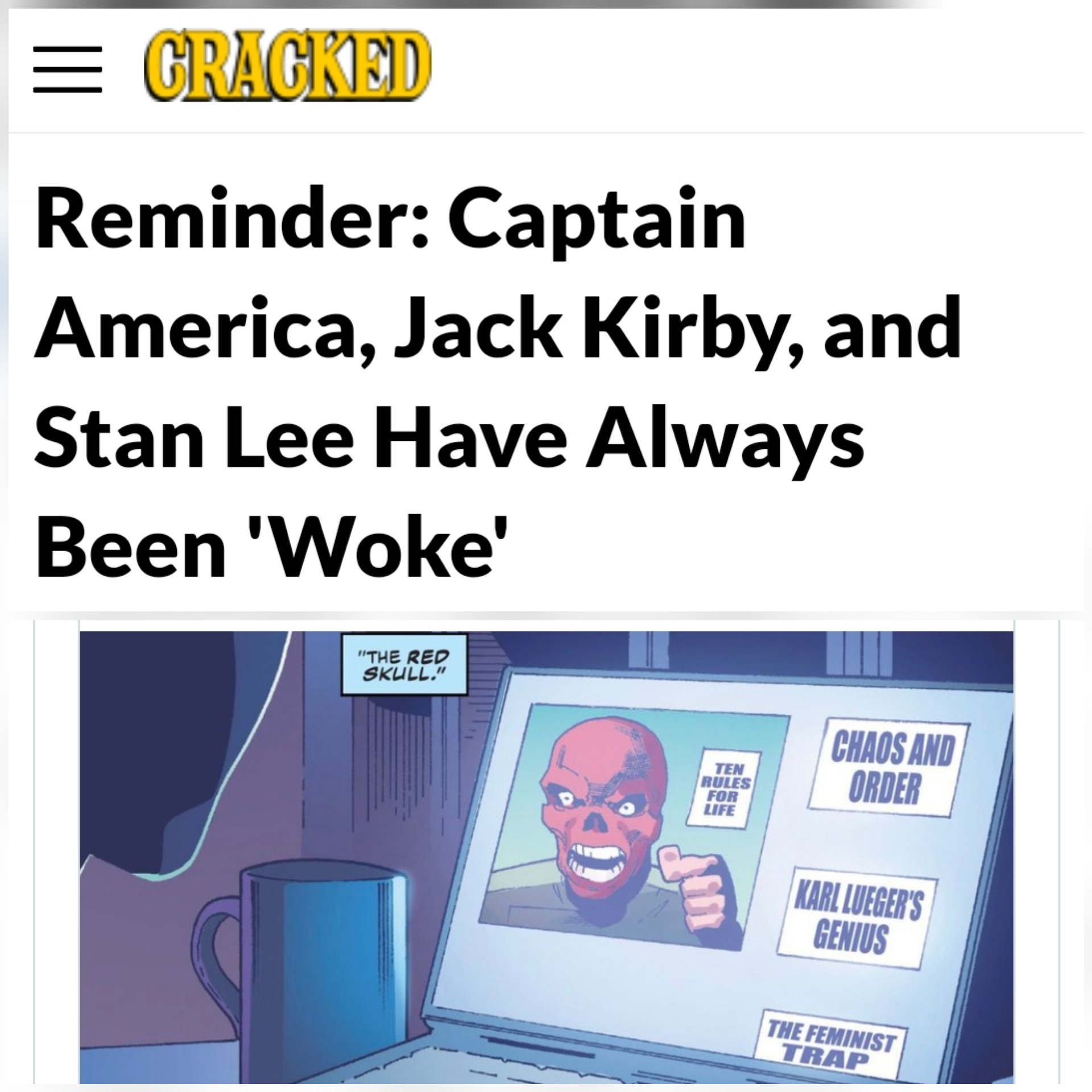 It was easy to ignore ‘wokism’ in movies before the 2010s-2020s.  This is because those in charge were not the ones being challenged. Movies placed such themes as The American Dream and meritocracy as something to be aspired to.

This meant more often than not, the heroes of the piece were white, straight, able-bodied men. They were spies, scientists, police, soldiers and adventurers … Not only in the protagonist’s role, but 90% of ALL the roles.

The antagonist’s role then went to obvious ‘baddie’ targets, such as Nazis. After that, many stories would ‘punch down’ and use disfigured people and queer-coded villains in particular. (Women, BIPOC and disabled people were frequently sidelined or even erased instead).

Now, writing *any* antagonist is not a malicious act by itself … however it becomes one when we scapegoat the marginalised. Creatives do this by elevating those who are already in charge at the marginalised’s expense.

But Now Those in Charge Are Now the Villains!

In other words, the ones at the ‘top of the tree’ … ie. right wingers, white people, men, the cisgender (the not transgender), the heterosexual, the able-bodied.

It’s no accident the ones shouting loudest about ‘cancel culture’ and ‘wokism’ are some blend of these (or even all of them).

Right wing culture warrior Jordan Peterson discovered he was in comic book writers’ sights recently when his  Twelve Rules for Life were apparently co-opted by Marvel Villain The Red Skull! Check it out … 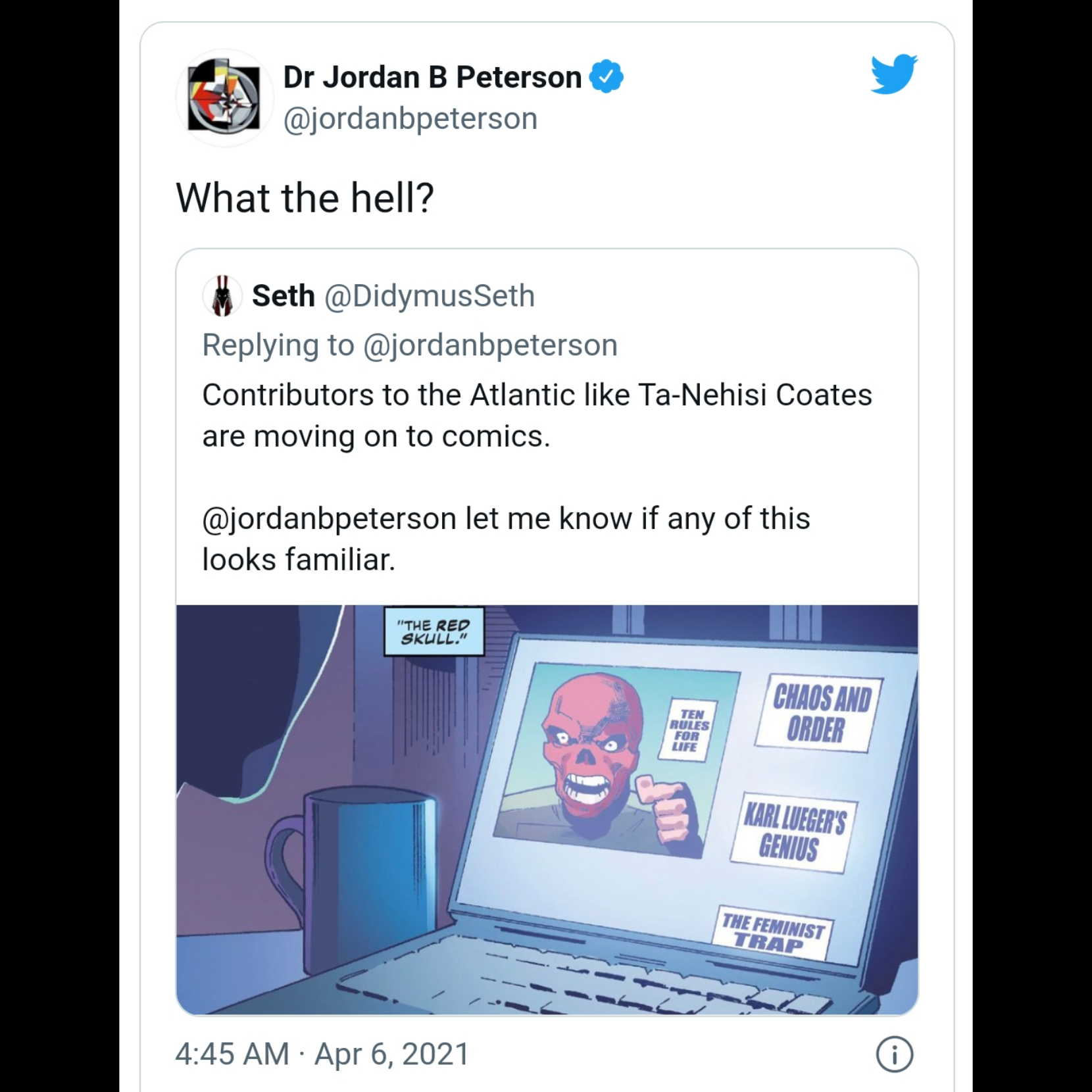 It’s been floated online more than once the reason the Dudebros hate Star Wars‘ Kylo Ren so much is because he IS THEM.

It’s not hard to see why. Many will have grown up hating on mythical Nazis from the movies whilst being blissfully unaware they’ve been sliding into Third Reich values themselves. Tumblr had this to say … 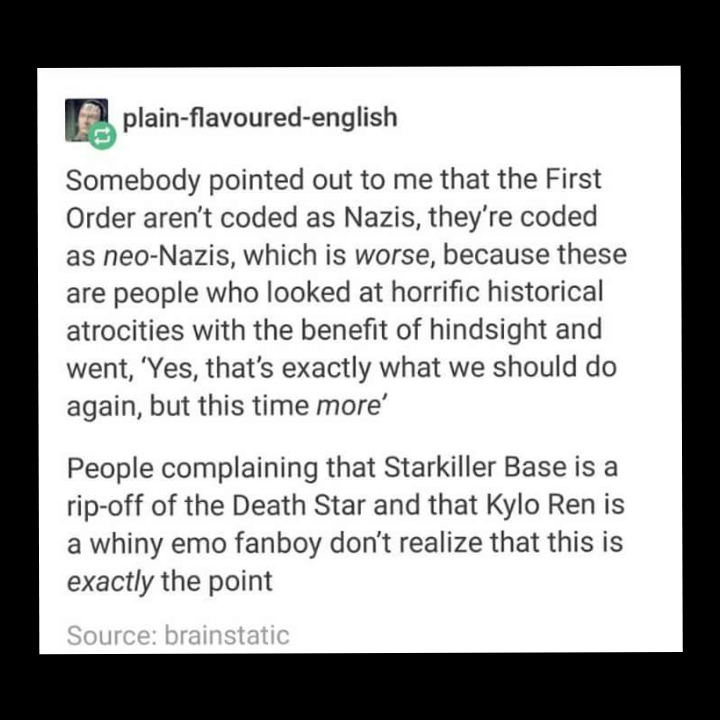 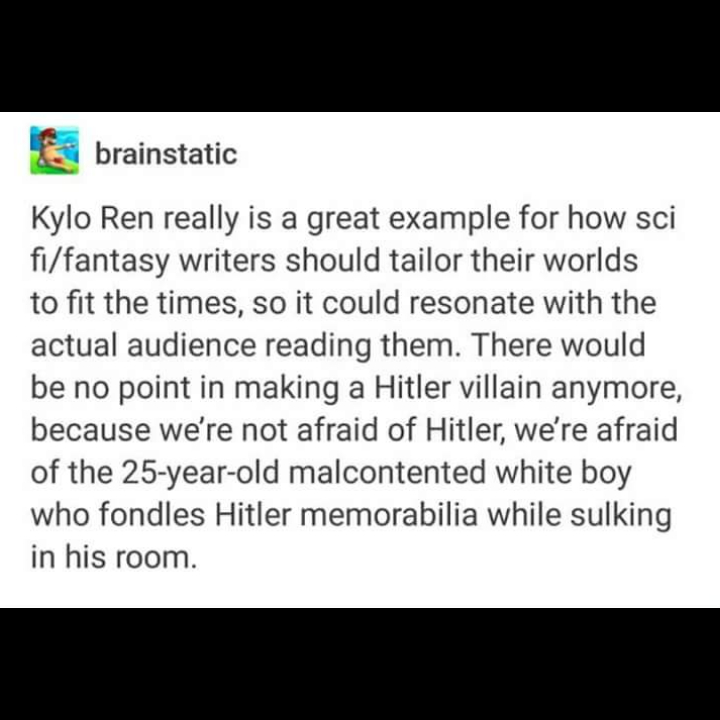 Get With The Programme – Literally!

Now, obviously not all Dudeflakes blowing off steam online are incels. But it is nevertheless disturbing how few people from non-marginalised groups understand the thematics of movies like the Star Wars franchise. 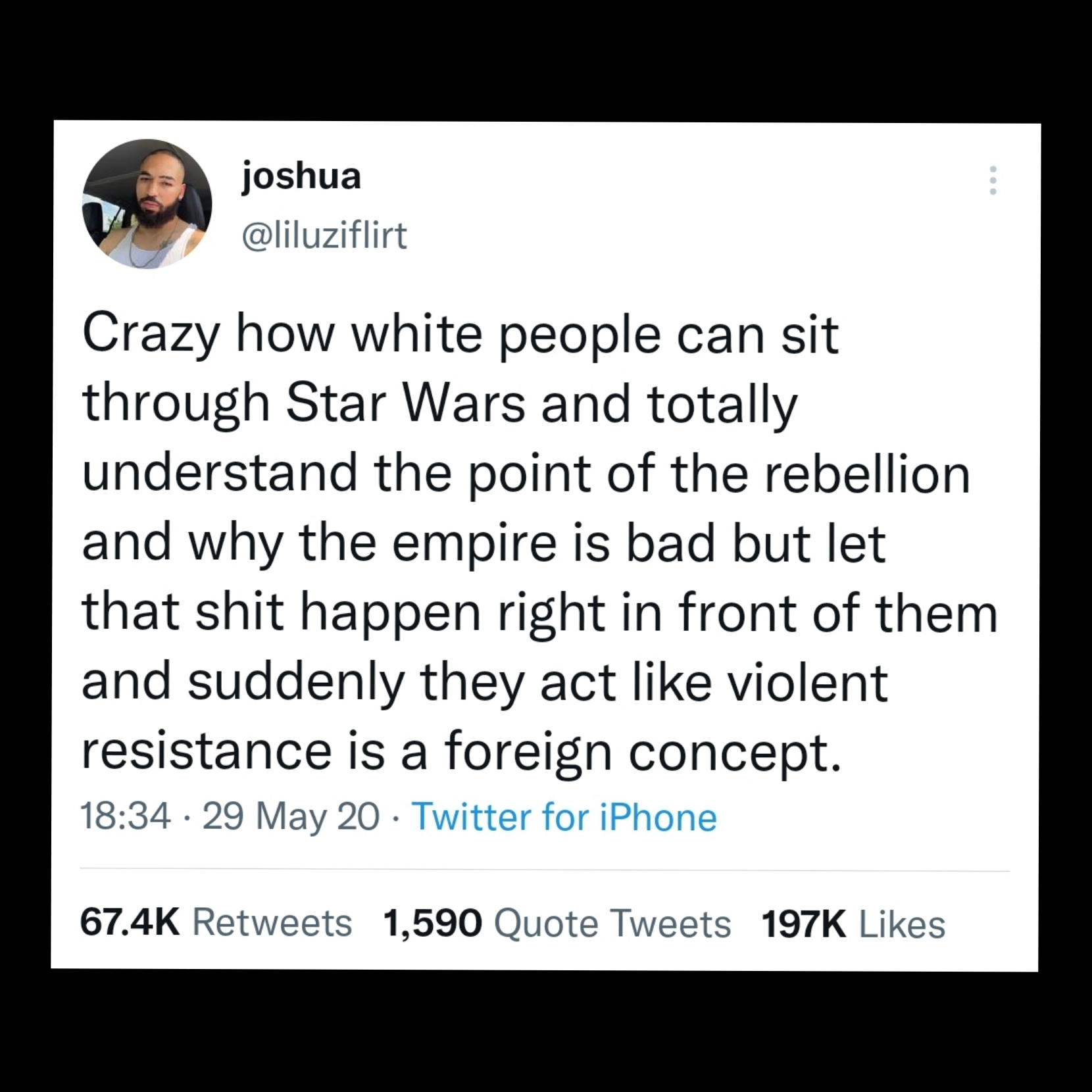 We have ALL grown up with stories that tell us we have to stand up for what we believe in. What is that but ‘wokism’? Hell, the entire Hero’s Journey is literally built on this idea!

Whether we’re fans of Star Wars, The Matrix, Harry Potter, The Hunger Games, Divergent, the Marvel Universe or something else, supposed ‘wokism’ is NOT a new thing by a long shot.

In fact, nearly ALL the movies – and stories in general – we loved as children were ‘wokist’ in some way, even if their themes or messages might have dated.

Time to get real.

2 thoughts on “Movies Have Always Been ‘Woke’. You Just Didn’t Notice”

previous9 Massive Career Mistakes to Avoid Making as a Writer
nextShould I Publish My Unproduced Screenplay To The Kindle?