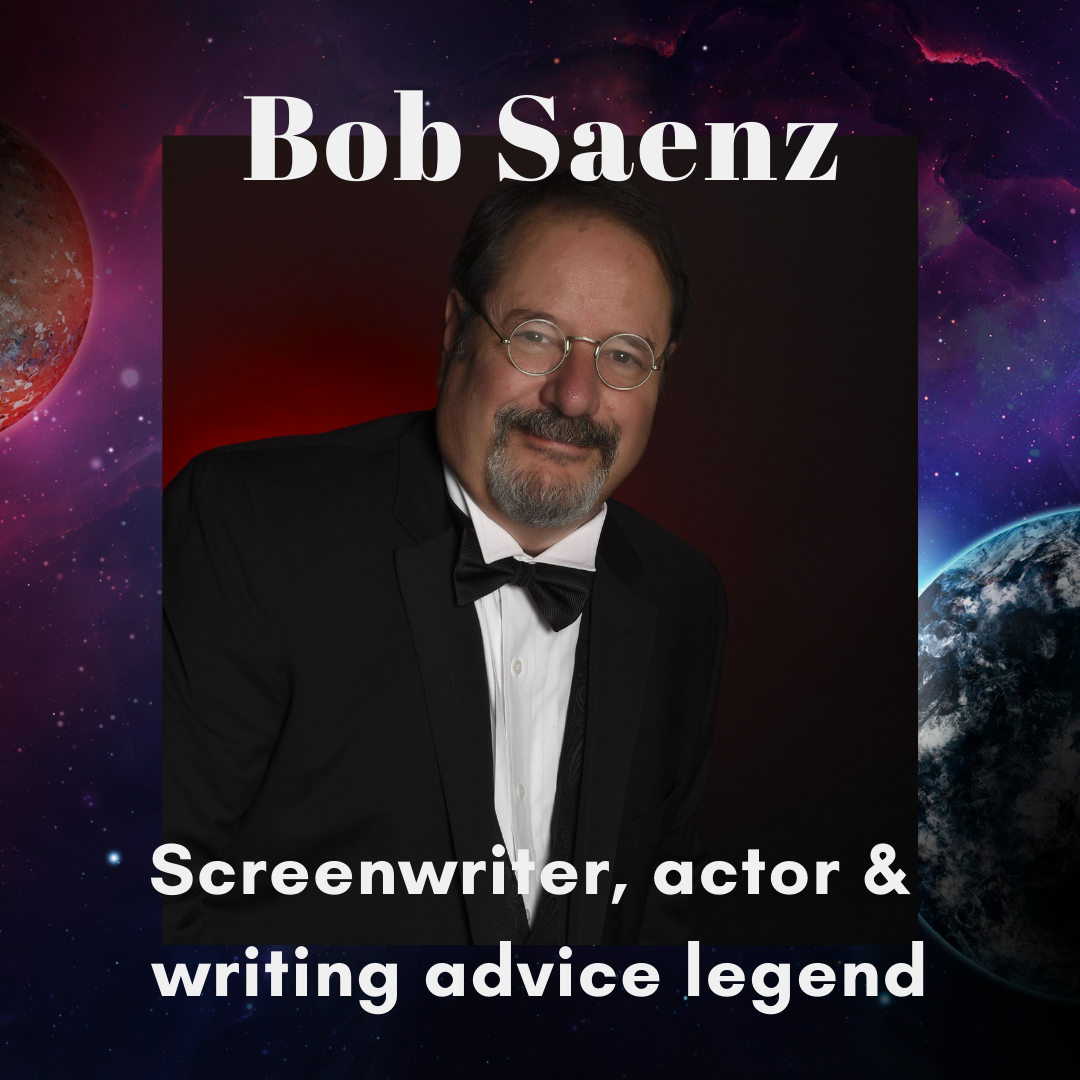 He’s also known for being a legend in online screenwriting groups. After offering his own brand of ‘smack talk’ for new and seasoned writers online, he wrote a fantastic book: That’s Not The Way It Works: A No Nonsense Look At The Craft & Business of Screenwriting. I recommend it to Bang2writers all the time!

I was thrilled to jump on a Zoom call with Bob and pump his delicious brain for his top writing tips for you Bangers. Ready? Let’s go …

I can so relate to what Bob is saying here. Rejection affects every single one of us as writers … even if we get published or produced, we will still have to deal with it.

As someone who has had to reject lots of writers, I can reassure Bangers what Bob says is true here, too. I have never rejected anyone simply out of spite, nor do I know anyone who has.

With all this in mind, I like to think about Michael Alvear’s ‘Writer’s Wager’ here. Read all about it, HERE.

‘The biggest mistake writers make is sending out scripts too early in the process.’ Bob says.

Again, I totally agree. I see great ideas executed poorly all the time … and it’s such a shame, because those scripts might have been great too in the long run IF the writers had taken more time on them.

‘You have to learn the craft, to tell a STORY. Make them want to turn the page,’ Bob adds, ‘Sometimes I see on Facebook or forums writers saying they have written a 140 page screenplay in three days. I think, ‘No you haven’t, you’ve thrown words on the page.’

So don’t just throw words on the page!

This is something I am always banging on about too … In fact, B2W has a free online course called ‘The Foundations of Writing Craft’ where there’s a whole module just for concept!

‘Concept can sell a badly written script, whereas a great execution alone won’t.. Take the time to look at your concept and ask, ‘Who would pay to watch this?’ If your story has no audience, it’s no good.’

Target audience is totally underestimated by so many writers … Or they misunderstand what this means, thinking audience is about ‘selling out’. But as Bob says, all audience is really about is pinpointing who the story is FOR.

I’ve written before on this blog that truly great concepts sell, even if the script itself is bad … whereas bad concepts (even with great writing!) DON’T. Harsh but true.

But if you think that’s your get-out-of-jail-free card, Bob has some bad news for you.

‘It could be a great premise, but written horribly … This *can* still sell, though writers need to understand they won’t be asked to rewrite. Producers will ask someone like me to do that and fire you from your own script. They won’t come back to you.’

Here’s a horror story (and not the good kind!) direct from the screenwriting trenches, courtesy of Bob …

‘A production company sent me a script. The concept was outstanding; so was the story potential … but the execution was one of the worst I’ve ever seen. It was so bad, the prodco just said to me, ‘Fix it.’ They couldn’t even give me any notes … I had to go through it and make it work, THEN they were able to give me notes. Guess how much of the original script I retained? Four lines.’

Summing up this section, Bob offers the following great advice …

‘If writers want to stay on their own projects, they need to have the craft AND mindset to write a great script. They need to be able to take notes, but also be creative with them and ‘mute’ the notes they don’t like.’

MORE: Top 5 Screenplay Notes and what they REALLY Mean 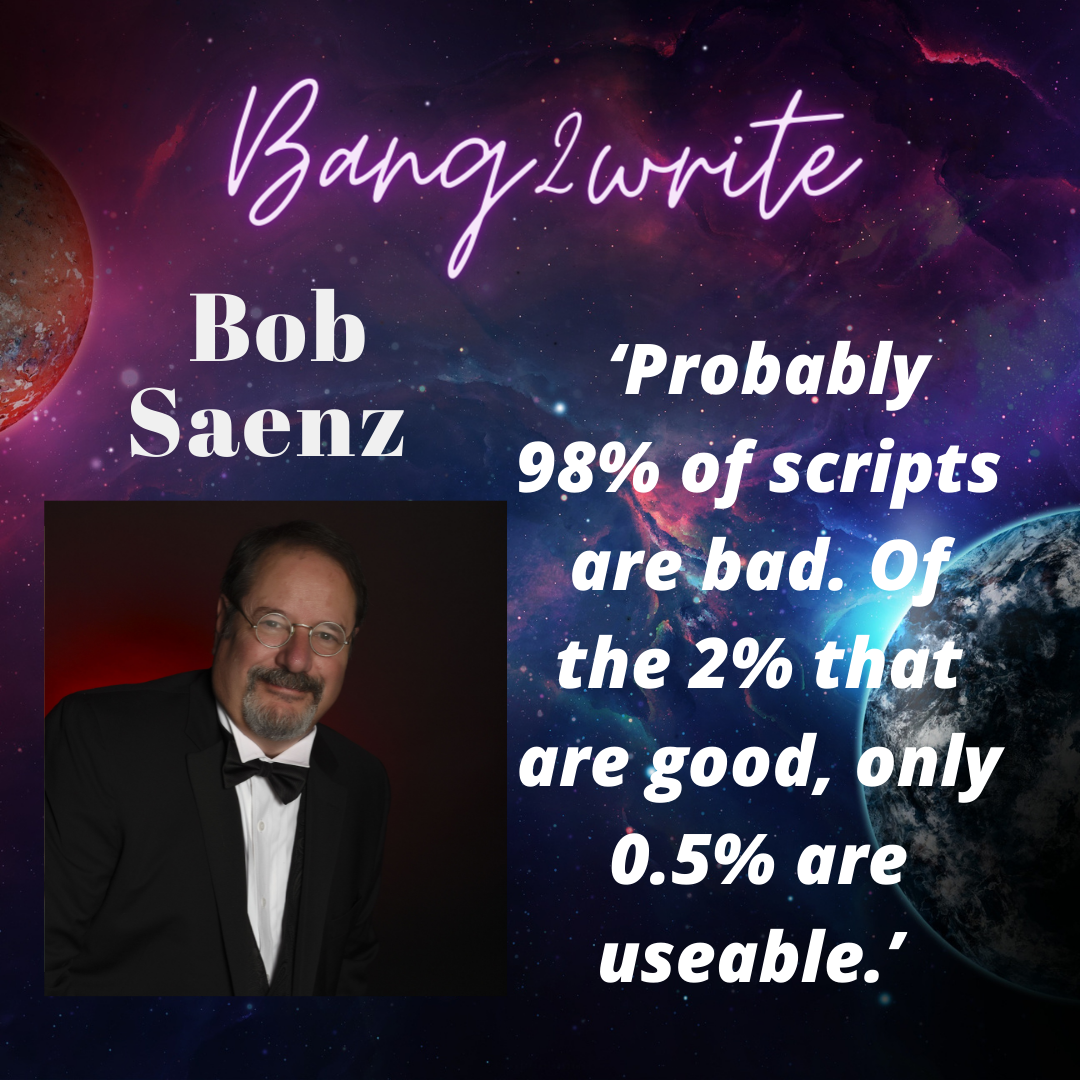 ‘A lot of writers don’t understand how set ups and pay offs work. Story has a spine. Whatever you have – an A story, B story, C story – has to go back to that spine.’

I love this. B2W calls it the ‘throughline’ but Bob’s descriptor is even better.  After all, we all have spines and know everything in our bodies is connected to it.

‘Look at the ‘small picture’ as well as the big picture,’ Bob says.

Damn straight. Every scene or chapter in your story has to ‘add up’ and contribute to that story spine after all. Too many scripts (and books for that matter) have chunks that might look cool but have no place in the story as a whole. For more, download the free B2W plotting worksheet.

‘You have to make sure every scene moves the story forward. Ask yourself, ‘how does this affect the entire story?’ A simple exercise for this: take that scene out and if it being missing does not adversely affect your script, you don’t need it.’

Such a useful exercise … try it at home! For more, check out How To Write The Perfect Scene.

B2W always says ‘no writing is ever wasted’ and Bob echoes this advice too … but DON’T just send them out willy-nilly! Check them and update them.

‘Update your scripts every year. Look at the tech, the social references, whatever dates it. Avoid having copyright notices – those have dates on too. Make it relevant for ‘now’ whenever that is. I’ve currently got fifteen-year-old and twenty-year-old scripts out at the moment by doing this.’

Harsh words from Bob, but from my work as a script reader I’d wager they’re probably true.

A lot of writers believe absolutely there are scores and scores of great scripts in the spec pile … but a few hundred hours reading spec scripts usually makes them realise this is not the case.

The uncomfortable truth is, even if there *are* loads of great scripts? Most are NOT useable **even when they are good**. Most often these good scripts will be too expensive to produce or have been sent to the wrong people.

‘All the successful writers I know are smart. They’re smart because they’re savvy and realistic. They know their opinions are not facts. They weigh everything up.’

Bob is BANG ON again. The reason B2W spends a lot of time putting emotive issues like so-called ‘cancel culture’ under the microscope is because savvy writers are successful writers.

Writers who are prone to freaking out won’t cut it in this bonkers industry! We need to do as Bob says and realise our perspectives are not the only ways of looking at something.

‘It takes a long time. Most screenwriters who succeed, it takes at least a decade to get there,’ says Bob.

Again, I can totally relate. I was lucky in that I got paid for writing very early in my career … but it was still a good 10 years (at least) before I was writing what I really wanted to write (novels).

‘Me? It took twelve years from my first script to produced film, which was Help For The Holidays for Hallmark. It was their seventh most-watched premiere of all time and eleven million people tuned in. That made me pretty happy! I have sixteen produced films now, soon to be seventeen.’

So if you’re yet to get your big break? Don’t sweat it. It could be closer than you think … but if you give up, you will never find out. MORE: Rejected? 3 Industry Pros Tell You: DON’T GIVE UP!

previousFeel The Power: Top 10 Witches In Books, Movies and TV
next15 Words You Never Knew Came From Literature