Feel The Power: Top 10 Witches In Books, Movies and TV 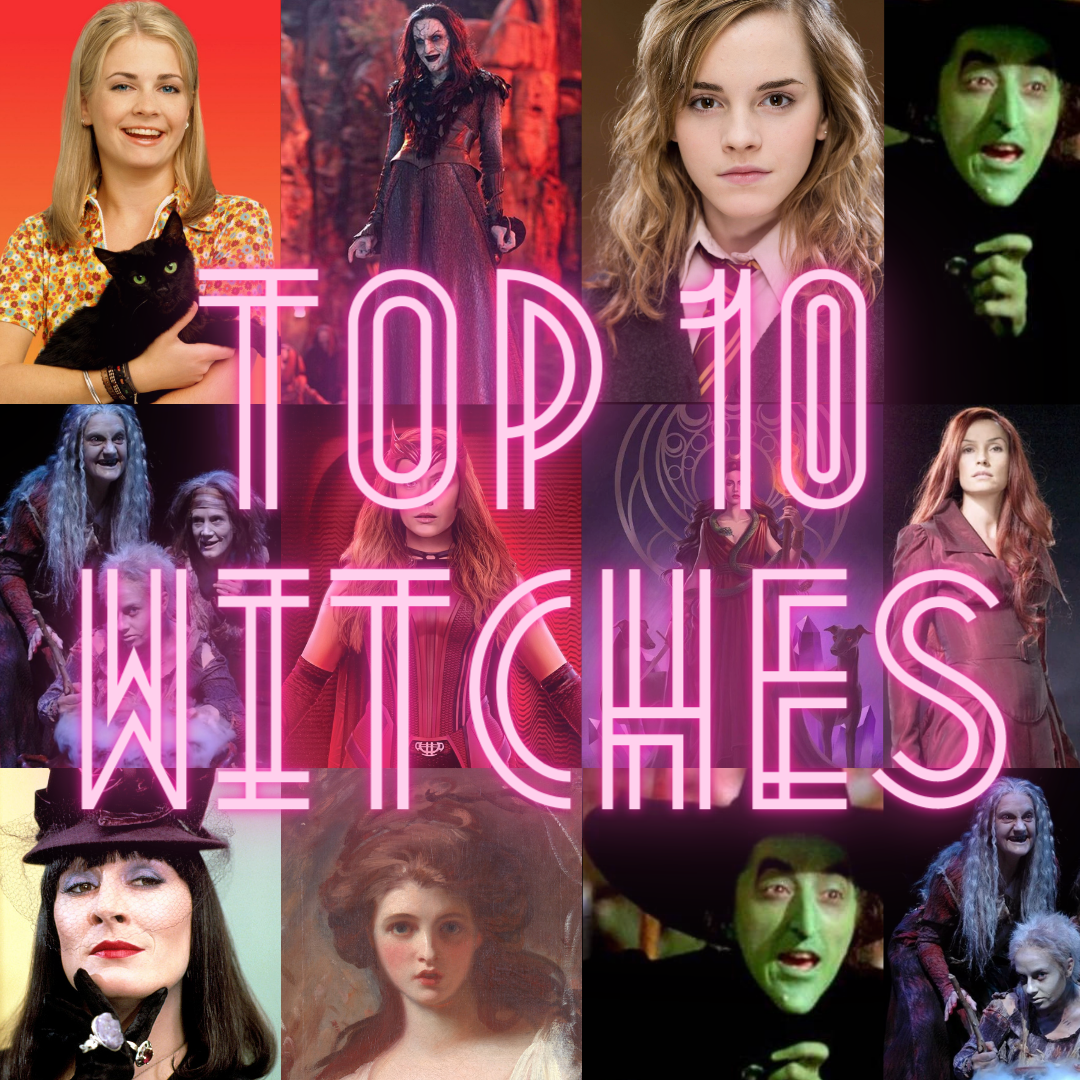 So unless you’ve been hiding under a rock, you’ll know my latest book The Coven (as Lizzie Fry) is about witches … and the paperback is out TODAY! I’ve been delighted by how the hardback and ebook have been received so far. Even actual witches have told me they’ve loved it. Thanks so much my witchy sisters, it means so much you feel my representation is authentic!

The Coven is set in a parallel world just like our own but where witchcraft is slightly different to what we might expect. 50% of women have some form of magic and it’s causing unrest amongst people all over the world. 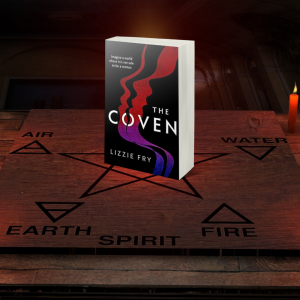 There are three types of witches in The Coven, divided into ‘The Triumvirate’. The vast majority are Kitchen witches, who like witches in our own world use spells, grimoires, poppets etc to cast their magic which is not innate.

Then the next rung of the ladder is occupied by The Crystal Witches (about 5% of women) who like their name suggests need crystals to channel and focus the magic they are born with.

At the top of the tree (about 2% of women) are the Elementals. They are naturally talented and focus the power coursing through their veins from the air, water, fire or earth.

Needless to say, the populist demagogue president of the united states does not like women having this much power one bit. His shadowy international cabal of men The Sentinel are tasked with keeping witches under control across the globe. 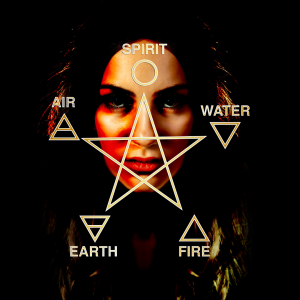 Amidst this chaos, a young woman in the UK called Chloe comes into her powers … and discovers she has ALL FOUR elements: air, water, fire and earth. She is quite literally the most powerful Elemental witch to ever walk the planet which means she is in terrible danger from The Sentinel who want her dead.

She and her father Daniel must go on the run to escape The Sentinel. Chloe is also helped by crystal witch Adelita who is drawn to the young witch and rogue Sentinel Ethan who is keen to redeem himself for his past crimes.

As the Spring Equinox approaches, time is running out for Chloe to discover how to use her powers and help free witches from the tyranny of The Sentinel, once and for all.

Of course, the concept of witches and witchcraft is ‘pre-sold’ … which means there were PLENTY of iconic witches out there to inspire me when writing The Coven!

I really enjoyed revisiting old favourites and discovering new witches in fiction. Here’s my top 10, but which are YOUR favourites? Be sure to let us know in the comments! Let’s go … 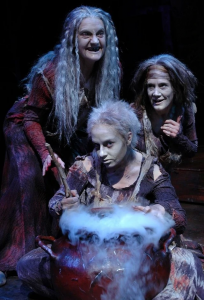 No book about witches is complete without a nod for this classic trio … So you’ll find a reference to the famous line “Fair is Foul, Foul is Fair” (Act 1, Scene 1) in The Coven!

The phrase is chanted by the three witches at the beginning of the play.  Shakespeare uses the line to show that what is considered good is in fact bad and what is considered bad is actually good. Since my (good) characters get called terrorists as they go up against systemic injustice, it seemed an obvious reference to include! MORE: Female Leads Through The Ages: Top 10 Must-See Characters 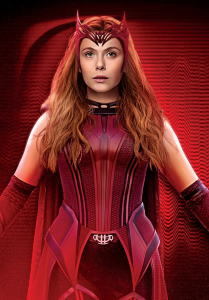 I’ve written about how the Marvel Universe influenced the writing of The Coven before, but not who was my biggest inspiration. Scarlet Witch has always been my favourite because her arc is so complex. I can totally understand why she started off allied with Hydra as a result of Stark Industries’ war-mongering.

As time went on her allegiances changed and a series of further tragedies befell her. First the death of her twin Pietro, then her lover Vision. The latter lead her to create a fantasy world in WandaVision to deal with her grief, unfortunately enslaving innocents to do it. She is both good and tyrannical in equal measure. Wow!

3) The Witch in Hansel and Gretel

As a child I loved fairy tales, the more GRIM the better! (Which should surprise absolutely no one reading this post). I adored the imagery of the witch’s gingerbread house, not to mention the idea of fattening up children for the oven. I also kinda felt sorry for the witch … after all, those greedy, antisocial kids WERE eating her house!

The idea of witches holding their annual conference in a hotel is a security conundrum … but even so, I loved this macabre tale as a child. The moment the High Witch and her sisters reveal their ‘true’ faces is just fantastic, plus turning children into mice is a diabolical plan. Apparently the original release of the book received mixed reviews and was criticised for perceived misogyny. Nevertheless it has gone on to be celebrated as a classic. 5) The Wicked Witch of The West

Another classic! Appearing in the 1900 novel The Wonderful Wizard of Oz by L. Frank Baum, the 1939 film adaptation apparently first introduced the concept of witches having green skin. This tradition has continued for almost a century now, not just on Halloween masks but also representations, including the musical Wicked (2003); the movie Oz the Great and Powerful, and the television series Once Upon a Time. MORE: 10 Female Characters Who Stirred Up The World

Circe is an enchantress in Greek mythology, renowned for her vast knowledge of potions and herbs. Through the use of these and a magic wand or staff, she would transform her enemies into animals. She famously transforms Odysseus’ men into pigs in the epic poem. Circe is also seen in Madeleine Miller’s revisionist novel, Circe.

I always thought Hermione was the REAL star of this series! An over-achiever, Hermione has a fear of failure and inflated sense of responsibility. Muggle-born, she worries a lot about her human parents. This makes her enact the ultimate sacrifice of ‘obliviating’ them so they forget they ever had a daughter, to keep them safe from Voldemort. Since obliviation is permanent, the tragedy for Hermione is horrific. 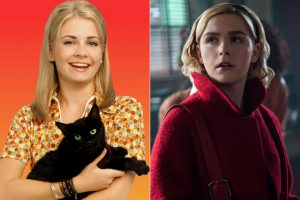 I grew up watching Sabrina The Teenage Witch in the nineties. Based on the comic book, Sabrina discovers her powers and witchy heritage on her sixteenth birthday.  I enjoyed its female-centric focus and irreverent humour, especially via the talking cat Salem (an obvious reference to the Salem witch trials). Sabrina was recently rebooted in The Chilling Adventures of Sabrina (2018-2020) on Netflix. This time it wasn’t a sitcom! 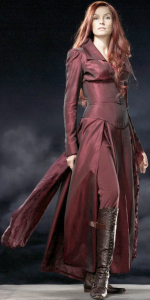 Okkkkkkkk she wasn’t really a witch but a mutant, but Jean Grey was still a powerful woman. Her powers are witch-like in that she has incredible empathic, telepathic and telekinetic abilities. She had a traumatic childhood and though she struggled to be good, sometimes did horrific things. I drew on Jean Grey for my ‘Earth witches’ in The Coven, especially Tansy, the ‘high witch’ at the Boscastle coven.

Hecate was the chief goddess presiding over magic and spells. She’s also the goddess all my witches in The Coven consult and pray to. Hecate witnessed the abduction of Demeter’s daughter Persephone to the underworld and helped search for her. I chose Hecate because of this. She was also the goddess of the Dark Moon which performs a plot point in my book. MORE: How I Used Screenwriting Techniques To Write The Coven

Who is YOUR favourite witch? Share in the comments!

10 thoughts on “Feel The Power: Top 10 Witches In Books, Movies and TV”