The Uncomfortable Truth About #OwnVoices Stories 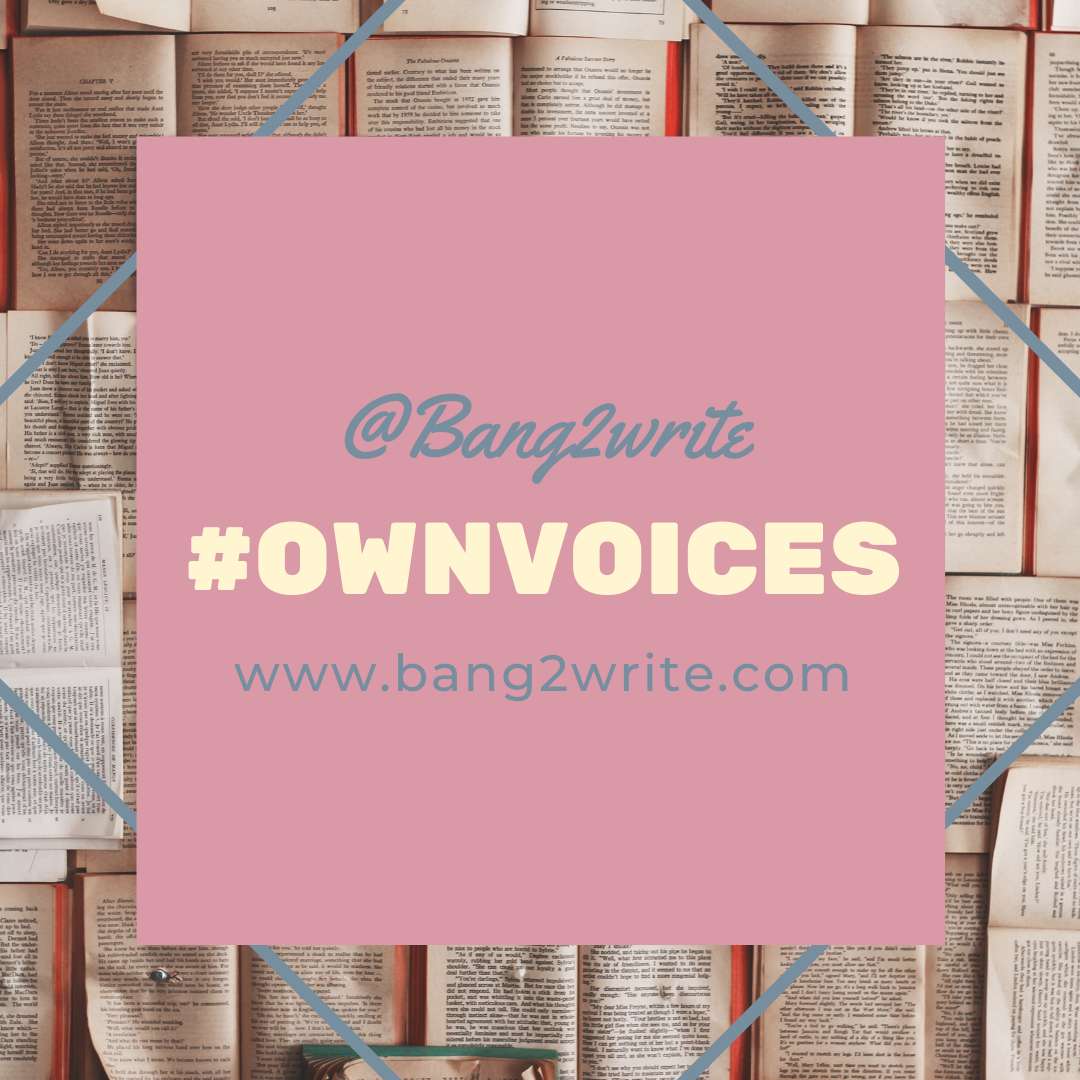 What are #OwnVoices Stories?

For the uninitiated, #OwnVoices is a hashtag created by YA author Corinne Duyvis in 2015. The purpose of the hashtag is to highlight books that are written by an author that shares a marginalised identity with the protagonist.

As time has gone on, the conversation around #OwnVoices has expanded informally to include TV and film too.

If you are part of the underrepresented group like your main character, you’re writing an #OwnVoices story. For example, if you’re a BIPOC, neurodivergent or disabled writer writing a character or story about the challenges you have lived experience of, that makes you part of this movement.

Intriguingly, despite research I was unable to confirm whether being female and writing a female lead makes your story #OwnVoices. I suspect not **as standard** (especially if you are white, straight, cisgender (aka not transgender) and able-bodied.

HOWEVER there is bound to be some movement on this dependant on what you’re specifically writing about. As an example, my novel Proof Positive is frequently hailed as an #OwnVoices story. This is because teenage pregnancy, specifically young parents, are a marginalised group. As every Bang2writer who’s followed me a good while knows, I was a teen mum. I specifically wrote that book because I was sick of the stereotypes, stigmas and assumptions thrown at young parents.

How I Feel About #OwnVoices

Before I begin, it should be noted I LOVE #OwnVoices stories. As mentioned, I have written them myself. Telling a story about your own experience as a marginalised person can not only share an emotional truth that is authentic, it can also be incredibly healing. It can be the same for those watching or reading it too.

So I can totally understand why some commentators believe the ‘only’ writers who should be writing marginalised characters should be marginalised themselves. After all, dominant voices have co-opted stories and screwed them up via toxic tropes, incorrect assumptions and plain old inaccuracy long enough.

Writers often insist writing is about imagining yourself in someone else’s shoes. This is true, but when those writers write the same old stereotypes and toxic tropes, we can see the issue easily.

However, those writers may still push back against #OwnVoices.  A very common cry is ‘I am writing crime fiction … but I am not a criminal!’. Or even, ‘I write sci fi … but I am not an alien!’  This is utter nonsense. Being a criminal or alien is NOT a marginalised group, so this supposed ‘point’ should be disregarded.

The above said, you may have noticed I am always at pains to insist I love these stories. There’s a good reason for this … It’s because any discussion of the limitations of such stories is frequently met with ferocity online.

I’ve even been accused of ‘propagating the lie #OwnVoices is no good’! This certainly doesn’t sound like me. Especially when we consider I love to read AND have written such stories myself! It makes zero sense.

However, I still think it would be disingenuous to insist #OwnVoices stories have no drawbacks whatsoever.

Most of the counter-commentary about #OwnVoices I have seen focuses on the ‘rights’ of non-marginalised creators (especially with reference to cultural appropriation).

In contrast, I have been party to very little industry commentary about another big issue … How being too prescriptive on #OwnVoices may box in and effectively ‘trap’ marginalised creators themselves. Let me explain, after the jump. 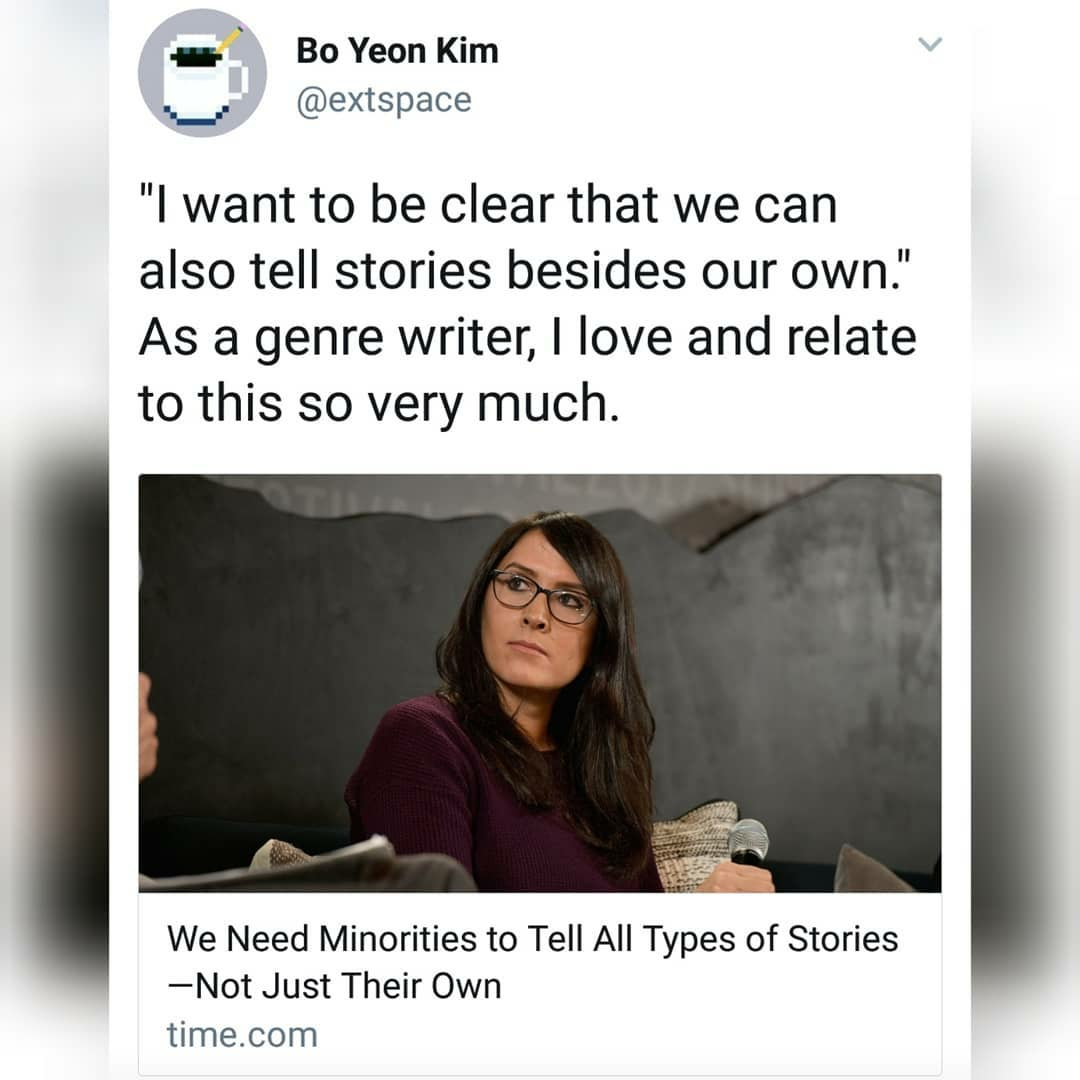 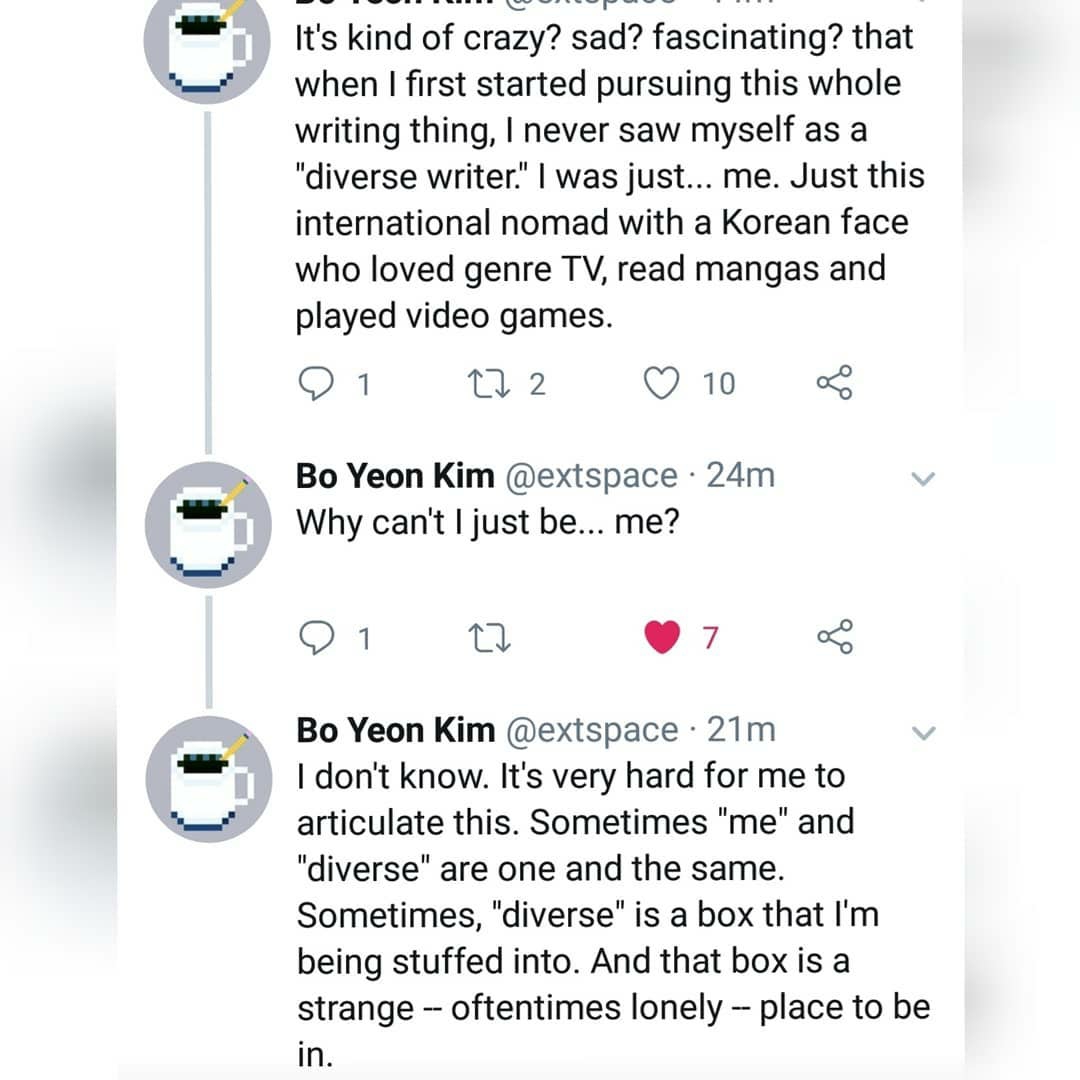 Check out this series of tweets above from Star Trek writer Bo Yeun Kim. She explains that being a marginalised creative is essentially a double-edged sword.

I have heard similar from many ‘diverse’ writers myself. It’s long been the case that UK black creatives are expected to write / make so-called ‘urban’ stories for example. That’s obviously fine when they want to, plus there have been some brilliant ones.

But obviously it ALSO goes without saying that a full range of genres, styles and types of story should be as open to marginalised creatives as standard. THAT is true inclusion. 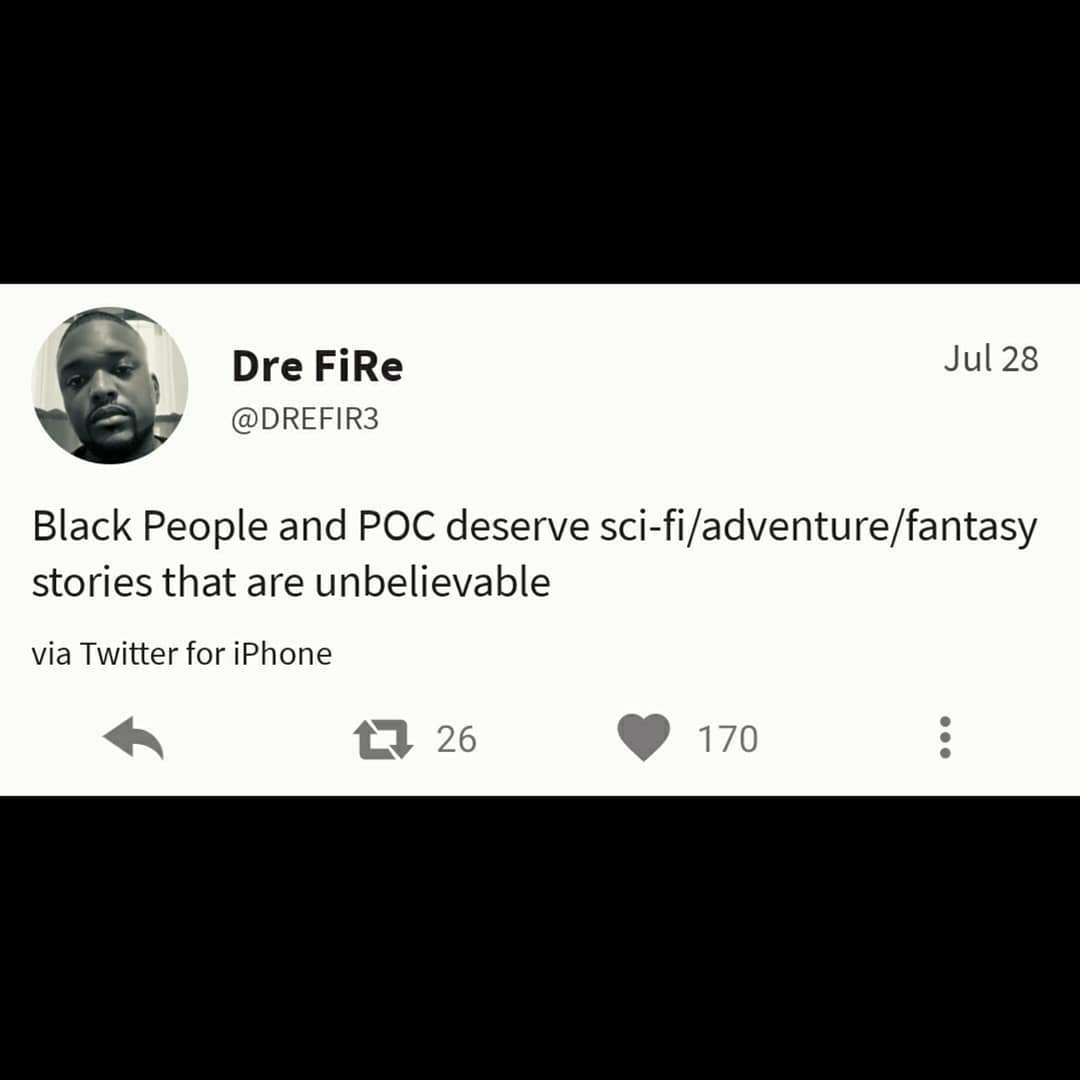 In an industry that likes to pigeon-hole its creatives and stories, it can be tempting to pick a USP (‘unique selling point’) and run with it. Whilst this can be effective, it can also be limiting. As a female creative, I don’t always want to write about so-called ‘female things’. Why can’t every type of story be open to me?

I know I am not alone in this. I have received these comments for this article …

Sam Kurd: ‘I do sometimes worry that with the Djinn story I’m working on (and my other, more controversial idea), I’ll be happily pushed into a box marked ‘can tell Arab/Mixed-Race Stories’ instead of ‘can tell fun stories’. I just want to write entertaining films.’

Emma Pullar: ‘I totally get this. I don’t have to write gangland London crime thrillers just because I come from a council estate in SE London. The amount of people who think I belong in that box is frustrating.’

@NeurodivergentWriters: ‘Own Voices are so, so important but nobody should be pressurised into writing about their trauma or even about their experiences at all. It is not marginalized creatives’ responsibility to write things for the sake of educating non-marginalised people.’

As you can see, the creatives here feel the same way as Bo Yeun Kim. 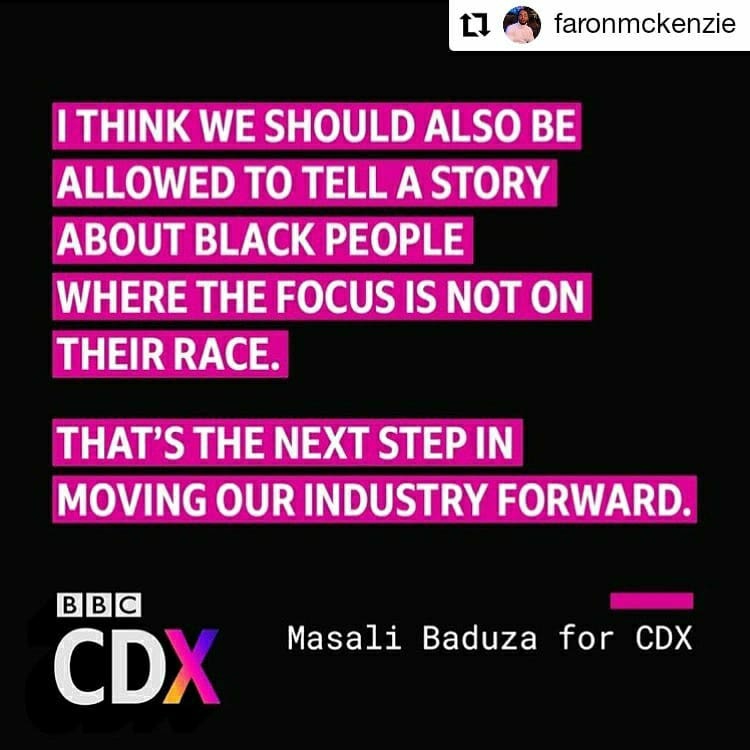 No one is denying there have been dominant gatekeepers who’ve kept marginalised writers out … that’s why said writers ended up marginalised! As mentioned already, I think it’s a GREAT idea to attempt to redress the balance with #OwnVoices stories.

I’m saying #OwnVoices becomes a problem when we’re too prescriptive … ie. when we say the ‘only’ writers who ‘should’ write marginalised characters are marginalised themselves and in exactly the same way.

This may lead to problems such as boxing in the marginalised creative … ie.

Since these stories tend not not to be green-lit as frequently as white/male/cishet/able-bodied stories, this is a serious own goal for inclusion.

Even worse, being too prescriptive has weaponised #OwnVoices too. I have already heard many horror stories from professional writers who’ve been asked if their novels and screenplays are ‘their OWN story’.

Why are these horror stories?

Because it may not be SAFE to stand up and have your story counted as #OwnVoices … Especially if you’re not ‘out’ as a LGBTQ person or as a survivor of sexual assault or domestic abuse. This pressure to ‘out’ writers weaponises #OwnVoices, going against the whole point of it.

In addition, there have already been multiple instances online where writers’ motives and marginalised identities have been put under the microscope and policed … ie. Is s/he ‘queer ENOUGH’ to write this story? Black ENOUGH? Disabled ENOUGH? And so on. Ack.

So yes, #OwnVoices stories are GREAT … But don’t IMPOSE them on marginalised creatives. No female, BIPOC, LGBTQ, disabled or neurodiverse creative should ‘have’ to write about their ‘own stuff’ or do so in a prescriptive way.

We’ve had enough of gatekeeping.

Good luck with your projects!

1 thought on “The Uncomfortable Truth About #OwnVoices Stories”