What Writers Can Learn From 5 Unusual Male Characters 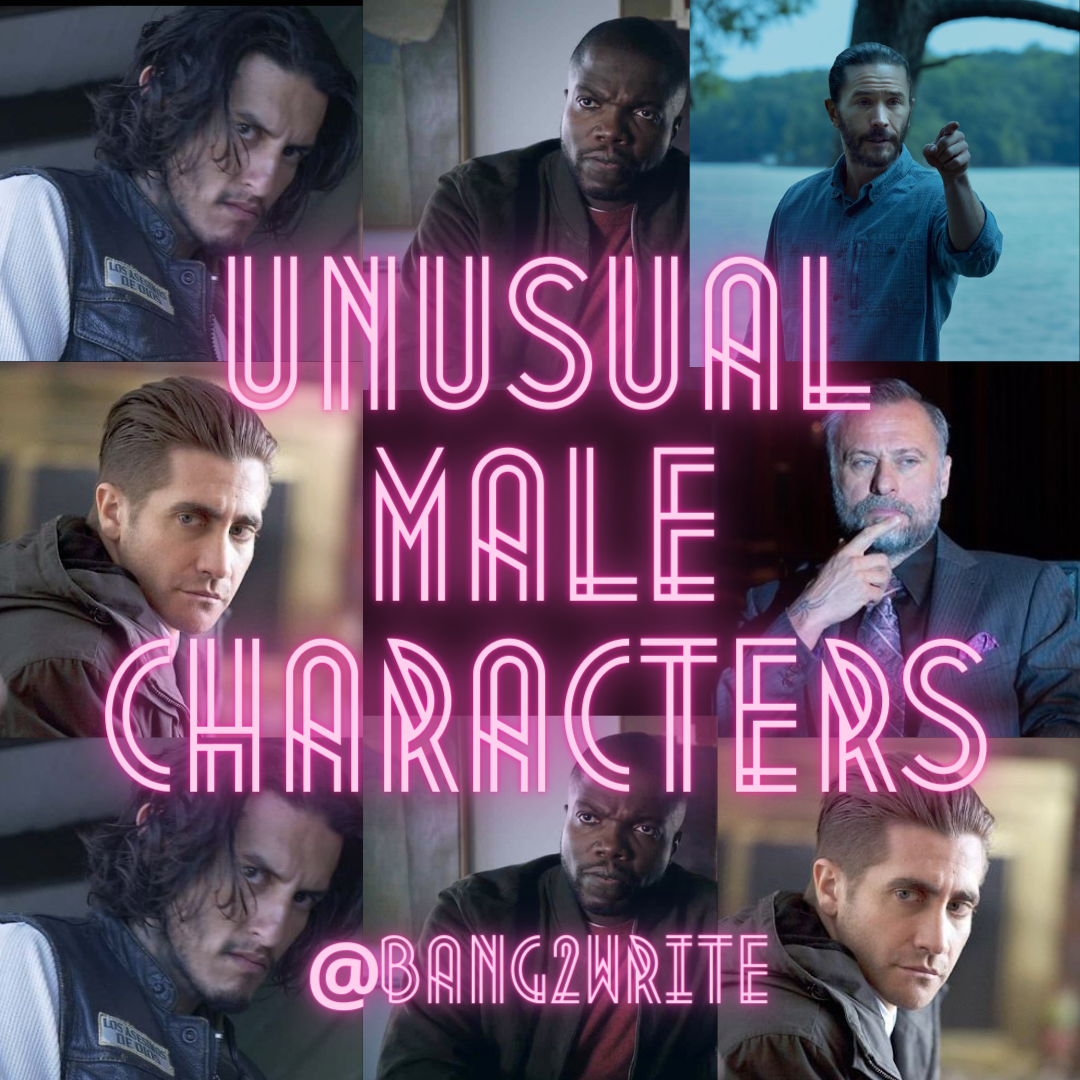 When I say ‘name an unusual male character’, who do you think of? Whilst it’s true male characters tend to have more variety as standard, it’s still very easy to fall into expected tropes and characteristics. ‘The usual’ as we know is BORING!

Since B2W is always banging on about going against the grain, here’s 5 unusual male characters we can learn from. Ready? Let’s go … 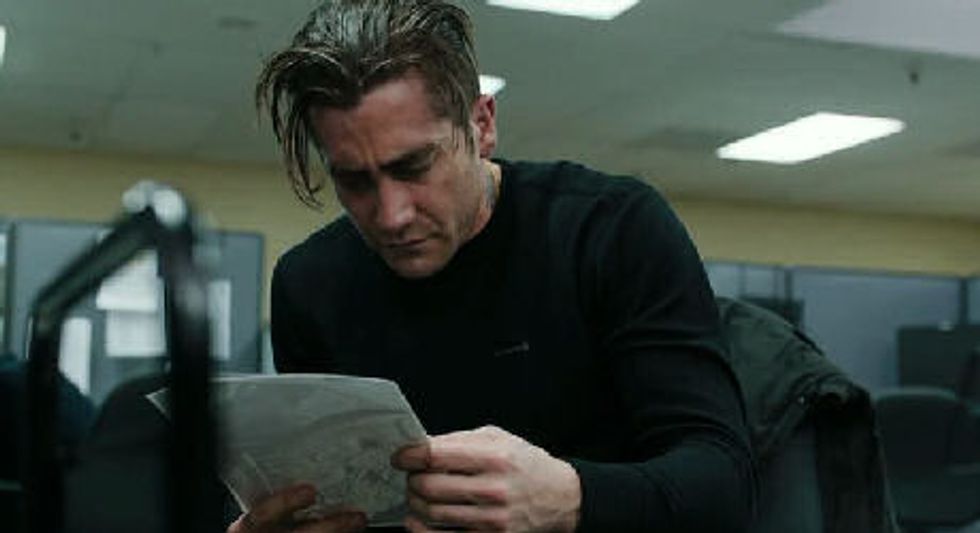 Written by Aaron Guzikowski and directed by Denis Villeneuve, Prisoners is an unusual beast … A vigilante story with a difference! When Keller Dover’s (Hugh Jackman) daughter and her friend goes missing, he takes matters into his own hands as the police pursue multiple leads and the pressure mounts.

Prisoners is an absolute masterclass on moral ambiguity in storytelling. What is so compelling about the movie is how horrifyingly relatable yet despicable antihero Keller’s actions are.

But this case study is not about Keller, but Detective Loki, the police officer tasked with finding the girls. The morally ambiguous theme of the whole story is reflected most in this character.

THIS SCENE reveals character and pushes the story forward in a very dramatic way. Detective Loki (Gyllenhaal) has a suspect in custody whom he believes is witholding information. The time is ticking away and the little girls who are missing could be dying.

As a character we know Loki is mostly honourable but not above doing whatever it takes to get this information. This means we are not surprised when he assaults the suspect, though we do believe his sorrow at fucking it up when the man kills himself.

After all, had Loki not assaulted the suspect …

Check out this breakdown of the film and screenplay from Lights Film School.

TOP TIP: A character’s actions should have a direct bearing on the plot … If you can get some dramatic irony in there too, even better! 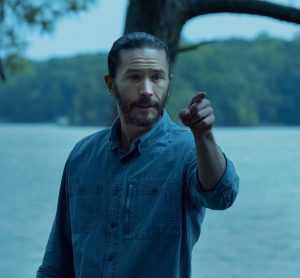 When financial advisor Marty Byrde (Jason Bateman) drags his family from Chicago to the Missouri Ozarks, he must launder money to appease a drug boss. Of course nothing goes smoothly, especially when Marty’s wife Wendy (Laura Linney) discover she LIKES being a kingpin (queenpin?).

Ben is Wendy’s bipolar brother and replaced the deceased Buddy in series 3 of this dark and deadly Netflix show. Unpredictable and sometimes reckless, Ben feels things deeply. Unsurprisingly then, he creates a huge raft of problems for The Byrdes. Taking up with Ruth, the Byrde’s right hand woman, Ben throws a lot of bombs into the family business. This forces the Byrdes’ hand on what they can do with him to protect themselves.

A powerhouse performance by Tom Pelphrey, Ben is a case study in authenticity and emotional truth. I am used to seeing characters with mental health issues drawn with broad strokes … at best. Nine times out of ten, they are stigmatising stereotypes.

This isn’t the case here. Ben’s rant in the taxi is just pure and real. His bipolar worldview is so recognisable. I related to all of it … Every. Single. Word. WATCH IT HERE.

What’s brilliant about Ben is he is the only one telling the truth. As he says again and again, the Byrdes’ situation is NOT NORMAL. It’s deeply dysfunctional and dangerous, yet they gaslight him constantly. They make out he is lying, confused, overreacting, is unreasonable, crazy.

In other words, exactly what people – well-meaning or not – do to people with mental health issues ALL THE TIME. So authentic and dripping in emotional truth.

TOP TIP: Do your research on mental health issues. Be aware of and avoid the common mistakes writers make when representing mental health in stories. 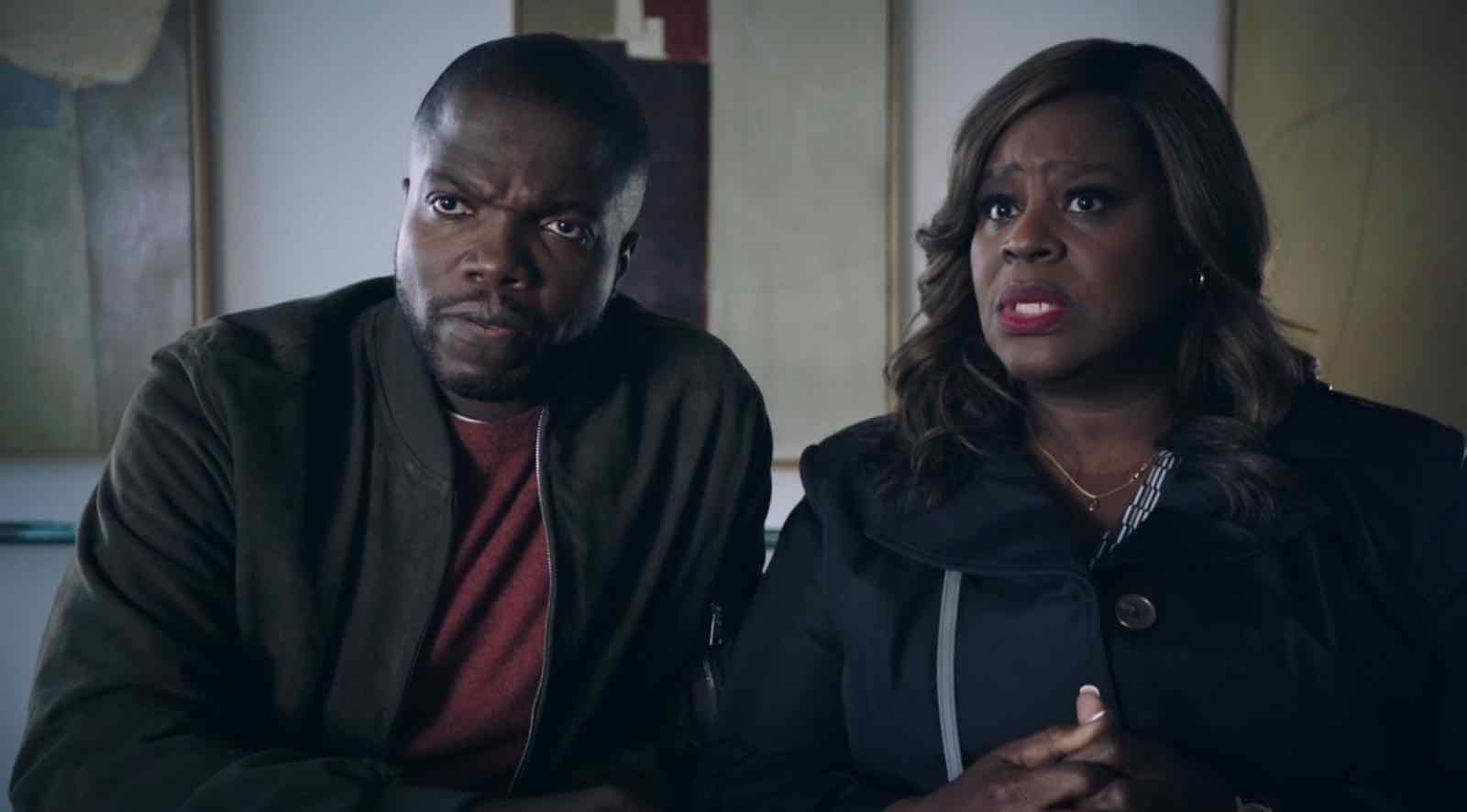 Why he’s unusual: A nuanced husband character with his own arc

This show is ‘Moms go Breaking Bad’! As three suburban mothers find themselves in desperate financial circumstances, they descend into crime. This includes armed robbery, fraud, taking up with gangsters and even counterfeiting money.

Stan is husband to Ruby, one of the Moms on the downward slope. He starts off a mall security guard, then gets his dream job of police officer in series 1. This means his job is a serious antagonistic force to the women. This is interesting, since they love each other so much … Yet he has the potential to destroy everything and bust all three of them.

As the series progress, Stan’s position changes, not only literally but metaphorically. He loses his job as a police officer and ends up working as a bouncer in a gentleman’s club. This in turn seduces him towards the dark side like Ruby because … WHY NOT? As he rightly says, he’s done everything right, yet he gets sabotaged constantly. But as Ruby screams at him, ‘One of us has to be good!’ She wants to take the burden of being the only criminal in the family. 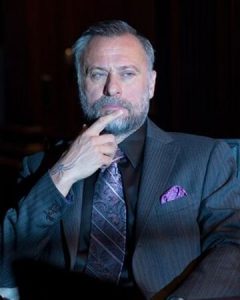 Viggo is the ‘Mr Big’ of Mafiasos, but that doesn’t mean he’s safe! Thanks to his irresponsible asshole playboy son Iosef, Viggo and friends end up the targets of  ‘Baba Yaga’ … AKA John Wick, the bogeyman assassin in this kickass franchise.

Played brilliantly by the late Michael Nyqvist, what’s so interesting about Viggo is what a snivelling coward he is. Characters of Viggo’s standing in gangster storyworlds are usually enigmatic, astute, even wise.

Not so with Viggo. When he hears Iosef stoke John Wick’s car and killed his dog, panic descends. At first, he hopes he can pull it back and reason with Wick, so calls him on the phone. When it’s clear Wick does not want to negotiate, Viggo has a horrible sense of inevitability … The man himself is coming for them all. Shit!!!

Viggo even sells his own son out to save his own miserable skin … But of course he can’t face up to this. Instead he will blame Marcus for ‘not doing his job properly’ and kill him instead. Men like Viggo never take responsibility, but we usually see them as powerless individuals. To see a Mafia boss like this is really refreshing.

TOP TIP: The enigmatic, astute and wise master criminal has been done to death (literally). What other versions of psychopaths, gangsters and Mafiasos can you think of? 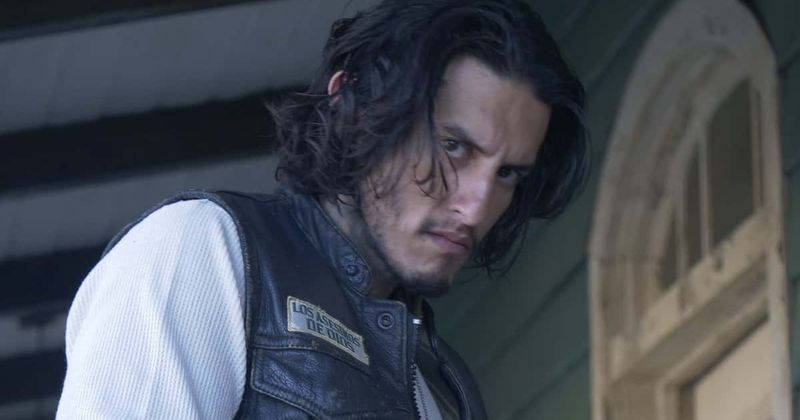 Why he’s unusual: Zen-like Sage who is also a murdering psychopath

Played to perfection by the always brilliant Richard Cabral, Coco is my favourite character in this show because he is a bag of contradictions.

As a military vet, Coco is a fantastic sniper and still suffers from his horrific experiences in Afghanistan. He has been pushed out to the fringes of society by racism, lack of opportunities and by his terrible family background, especially his abusive mother.

As we might expect for an outlaw, Coco is a ruthless murderer who has a horrible lack of regard for human life. ‘Oops my bad’ he’ll say as he ‘accidentally’ kills yet another person!

But this where where Coco’s characterisation starts, not ends. He is a stalwart Mayan, devoted to his brothers. Coco is a devoted father to Letiticia, too … He tried to stay away for her own good, before realising he’d left her to a worse fate with his mother. He is a protector of the innocent: he has lead charges against human traffickers and delivered aid and back up to guerilla fighters against the cartel.

But more than any of this, Coco is a TEACHER. The writers of the show have made him an archetypal character – ‘the sage’ (aka wise man). Coco can always be depended upon to see the bigger picture and get right to the heart of the matter, delivering his point with BRUTAL honesty …

‘Think about what this means and why you want it. If the reason isn’t something you can feel **in here** [touches chest]? Then do yourself a favour: move the fuck on.’

TOP TIP: Outlaws might not play by the rules, but they can still drop truth bombs about society and life just like Coco. MORE: Rethinking Masculinity: How To Write A Memorable Male Character

Want MORE on Gender And Characterisation? 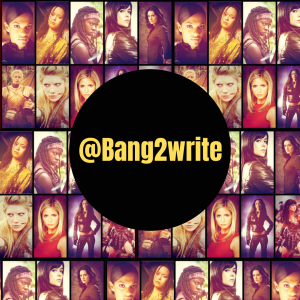 CLICK HERE to grab your FREE ebook on How NOT To Write Female Characters as a PDF, Kindle or ePub.

Read it already and liked it? Please GIVE IT A STAR RATING. Thanks!

All protagonists need an antagonist to smack up against **for some reason** ... but what if I told you that antagonist DOESN'T have to be a villain?? 'Antagonist' and 'villain' are used interchangeably so much I often blow writers' MINDS when I say they DON'T have to be one and the same!! But what could your antagonist be instead?? Find out on the B2W main site today. ... See MoreSee Less

Your Antagonist DOESN'T Have To Be A Villain. Here's Why - Bang2write

NEWSFLASH: the antagonist is your story DOES NOT have to be a villain. B2W's Lucy V explains why, pl...
View on Facebook
· Share

SO I caught up with the Black Widow movie! She is not my fave character in the MCU so I missed it first time round, tho my daughters are big fans of this one so I went in wanting to love it. Since I was introduced to her in AVENGERS ASSEMBLE (I'm not a comics fan) I always thought of Black Widow as the epitome of what B2W calls 'The Girl Character*' in my Thriller Screenplays book. Over time the #movies have done a little to soften my impression of her, not least ENDGAME. The Black Widow movie does a little more to giving us Natasha's backstory and fleshing her out more. I really liked the addition of her family and her dark past. There's some impressive performances, not least Florence Pugh's Yelena whom I am sure will be excellent in future instalments. There's some good Easter Eggs too for fans such as THAT name-check for The Red Guardian. I also liked the thematics at play: there's some fantastic commentary on patriarchy and how girls are groomed and controlled from childhood by an exploitative system that doesn't have their best interests at heart. Overall though I was meh on the plotting. Set pieces were surprisingly lacklustre, specifically the showdown which felt way too similar to CIVIL WAR (or whichever one has a spaceship falling out the sky as well, I forget). I was also annoyed by the inclusion of yet another antagonist with a mangled face. Most problematic however was I found it difficult to care given I know what happens to Natasha in ENDGAME. This movie was in development for AEONS and it feels a little like this was 'too long' after everyone wanted it ... Or for me, anyway. So MY VERDICT - thumbs up on characters overall and thematics; thumbs down on plot ... And since I am a plotting junkie, I doubt I will be watching this one again. (*In a an ensemble of highly differentiated males, there's a female lead defined by the fact she's THE ONLY GIRL). ... See MoreSee Less

Sadly predictable ... It's all coming out in the RUST shooting story. Apparently corners were cut and working conditions were appalling. ... See MoreSee Less

Union members say they walked off set to protest the morning before the accident.
View on Facebook
· Share

Great news! #Bang2write has been recognised by the QueryLetter site as a phenomenal resource for #writers 💓According to QueryLetter.com: "This award lets #writers - be they novelists, nonfiction writers, poets, or another type - know that your blog is a great place to be to grow their skills and stay informed about the writing world. It’s an elite award, presented to far less than 1% of #writing blogs." 😍They've made my weekend!! ✅✅✅ ... See MoreSee Less