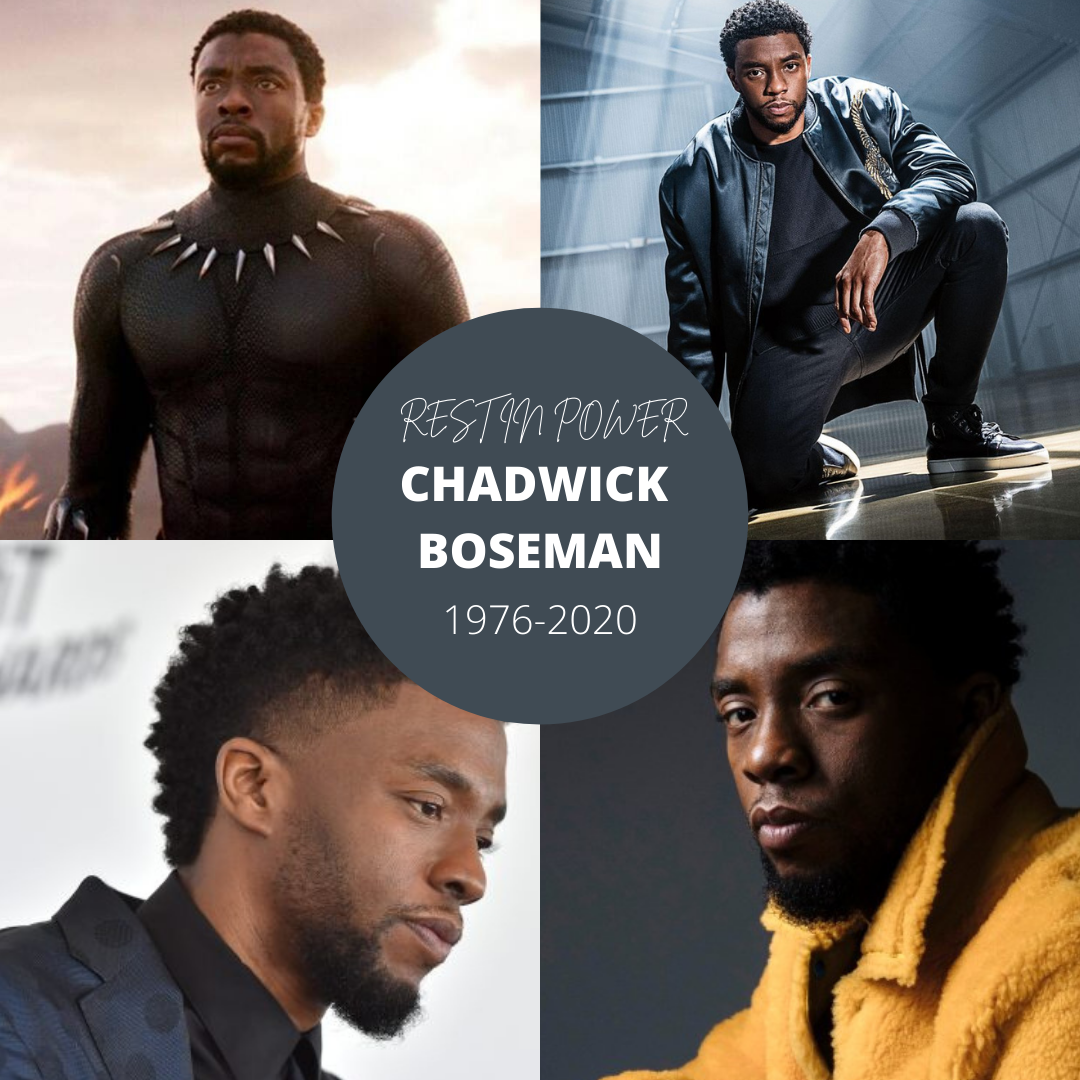 Last week the creative world was rocked by the unexpected passing of Chadwick Boseman due to colon cancer. Known best internationally for his powerhouse performance in Black Panther (2018), Chadwick has an impressive CV.

Starting out in bit parts in television, Chadwick rose through the acting ranks very quickly once he’d achieved his breakthrough role in 2013 in the Jackie Robinson biopic, 42. He continued to portray historical figures, starring in Get on Up (2014) as singer James Brown and Marshall (2017) as Supreme Court Justice Thurgood Marshall.

Tributes have poured in for Chadwick all week. It’s clear to see how much Chadwick’s success and his iconic portrayal of T’Challa meant to so many Bang2writers, of every colour. This is B2W’s tribute to the man himself, who seemed to me to radiate both creativity and determination. 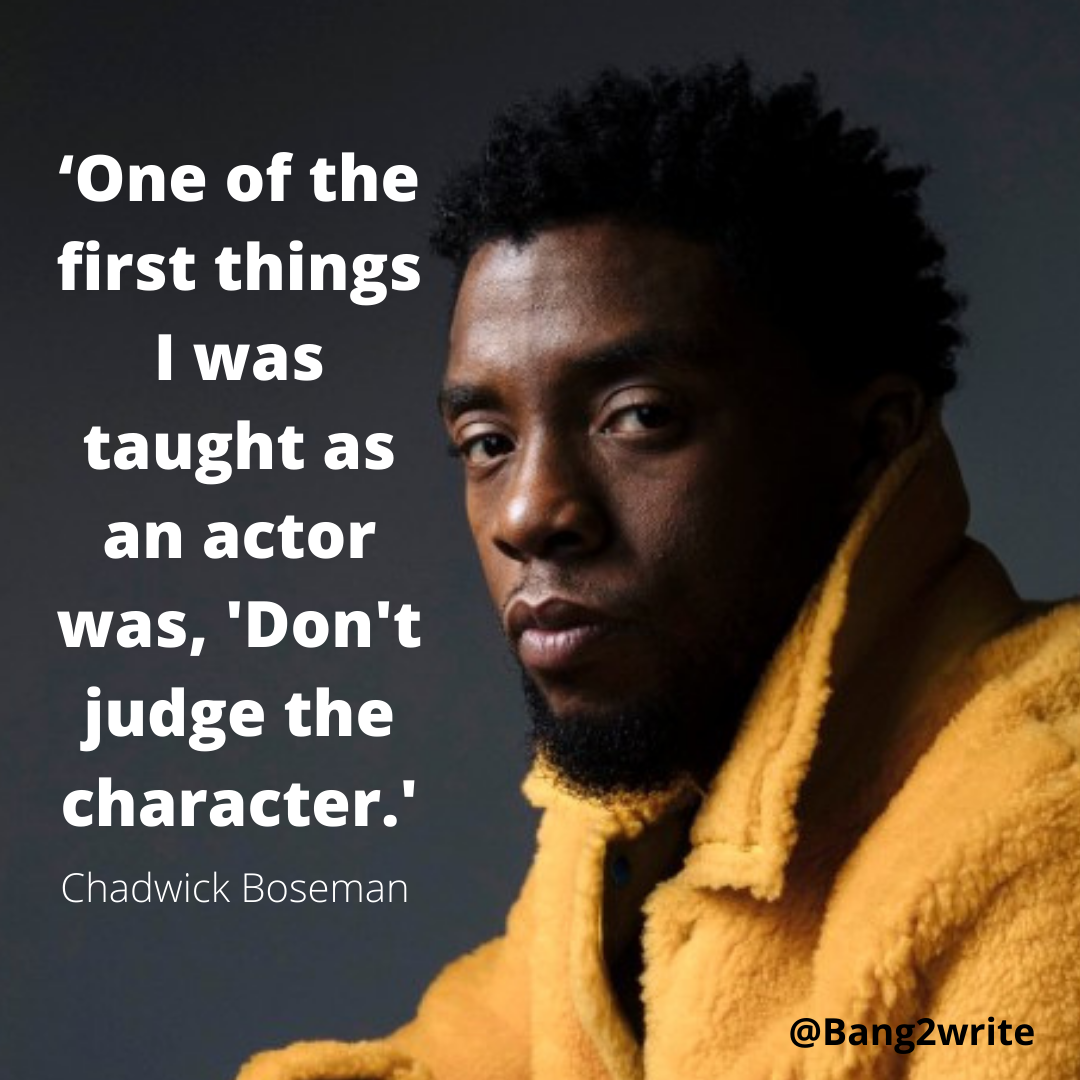 Actors love to get in touch with their characters and Chadwick reminds writers here actors are not just meat puppets. We need to provide them with characterisation that is nuanced and layered, by giving them powerful motivations.

‘The thing I love about Marvel in general is that they deal with people. They deal with the human being first: Who is inside the suit? Who is the person that obtained this power or this ability?’

Marvel have done a great job in recent years with characters that audiences can relate to and invest in … No matter how fantastic or implausible the events in the events might be! We are reminded great characterisation is about presenting someone who is HUMAN, first and foremost.

‘One of the first things I was taught as an actor was, ‘Don’t judge the character.’

We don’t have to condone a character’s behaviour or even LIKE them to understand where they are coming from … By the same token, Chadwick’s performance as T’Challa reminds us that heroes don’t have to be perfect. They can make terrible mistakes. 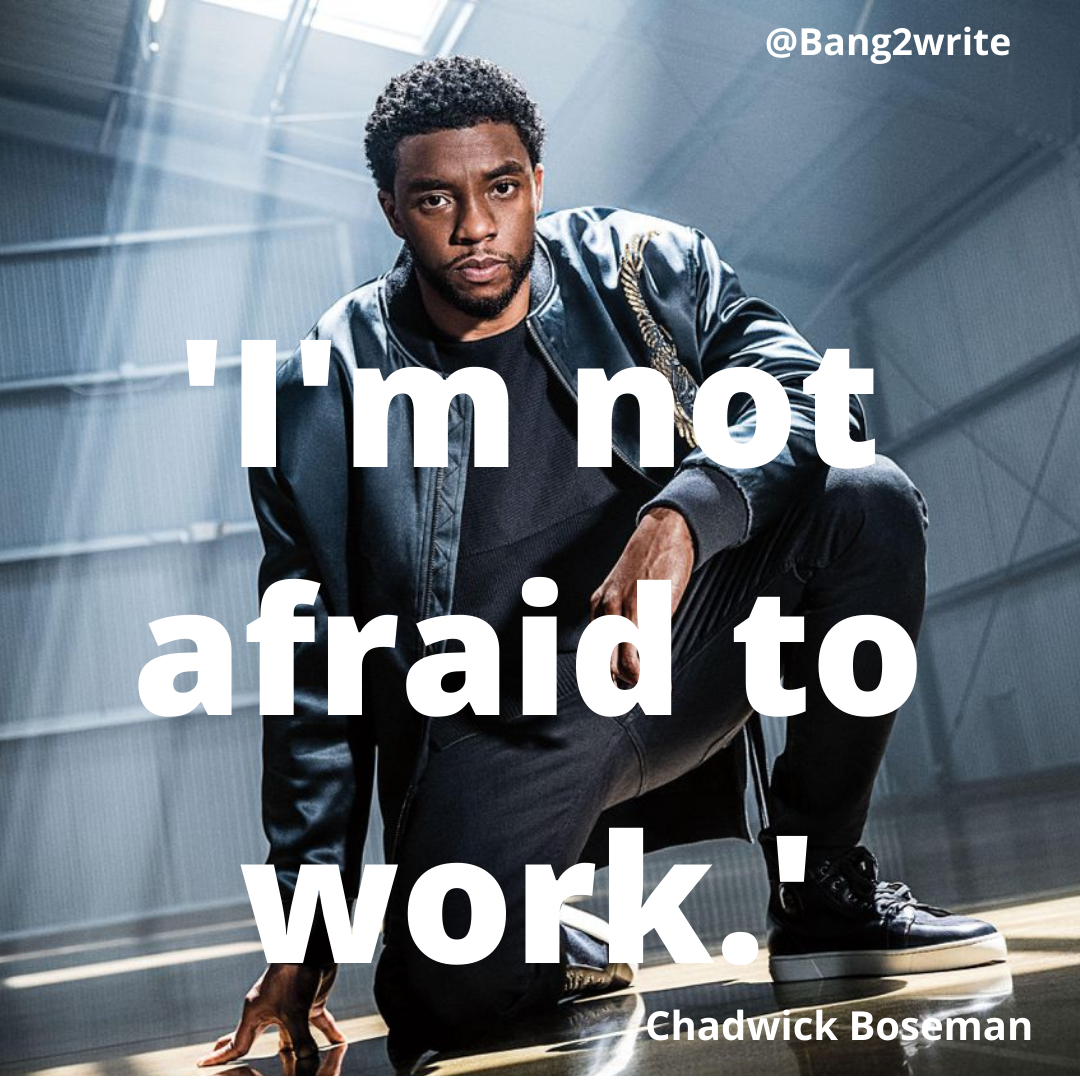 ‘Every year, Hollywood is looking for that new, white leading man and new white starlet that audiences fall in love with. But they’re not looking for the next Denzel Washington, Will Smith or Sidney Poitier.’

Chadwick leaves us with a great reminder here … White actors are set up for stardom in a way black, asian and other minority actors are not. That doesn’t mean it’s ‘easy’ for white actors to become stars … It’s clearly a very difficult path and many more will fail than succeed.

However, the system is still set up by white people, for white people. This means the struggle a white person has becoming a star is simply not as difficult or as unlikely as a person of colour doing the same.

We can relate to this as writers, too. It is not easy becoming a professional writer, I can attest to that … but my struggles have not been racial. Skin colour has never once stood in my way. I have not been told by agents they have a ‘already have a white author’ or been advised to write about ‘white things’, after all.

‘As an African-American actor, a lot of our stories haven’t been told.’

In the past, if black stories were told, often they were HIJACKED by white people in exploitative ways. Very often those stories were stigmatising, stereotypical or plain wrong on top of that.

This is textbook cultural appropriation … Taking over marginalised people’s stories and packaging them up in ways deemed ‘acceptable’ to white audiences. Ack.

Thankfully, we are starting to see more understanding of this issue. It’s true that some writers have rejected the idea, saying they are being ‘stopped’ from writing. That said many more are beginning to process the idea that white people can’t just take whatever they want.

Authenticity and emotional truth are so important … And sometimes, the most heartfelt stories come from those who’ve LIVED it. Is it any wonder black AND white audiences alike loved films like Black Panther or Jordan Peele’s Get Out so much? Put simply, variety is the spice of life, so storytelling should be too. 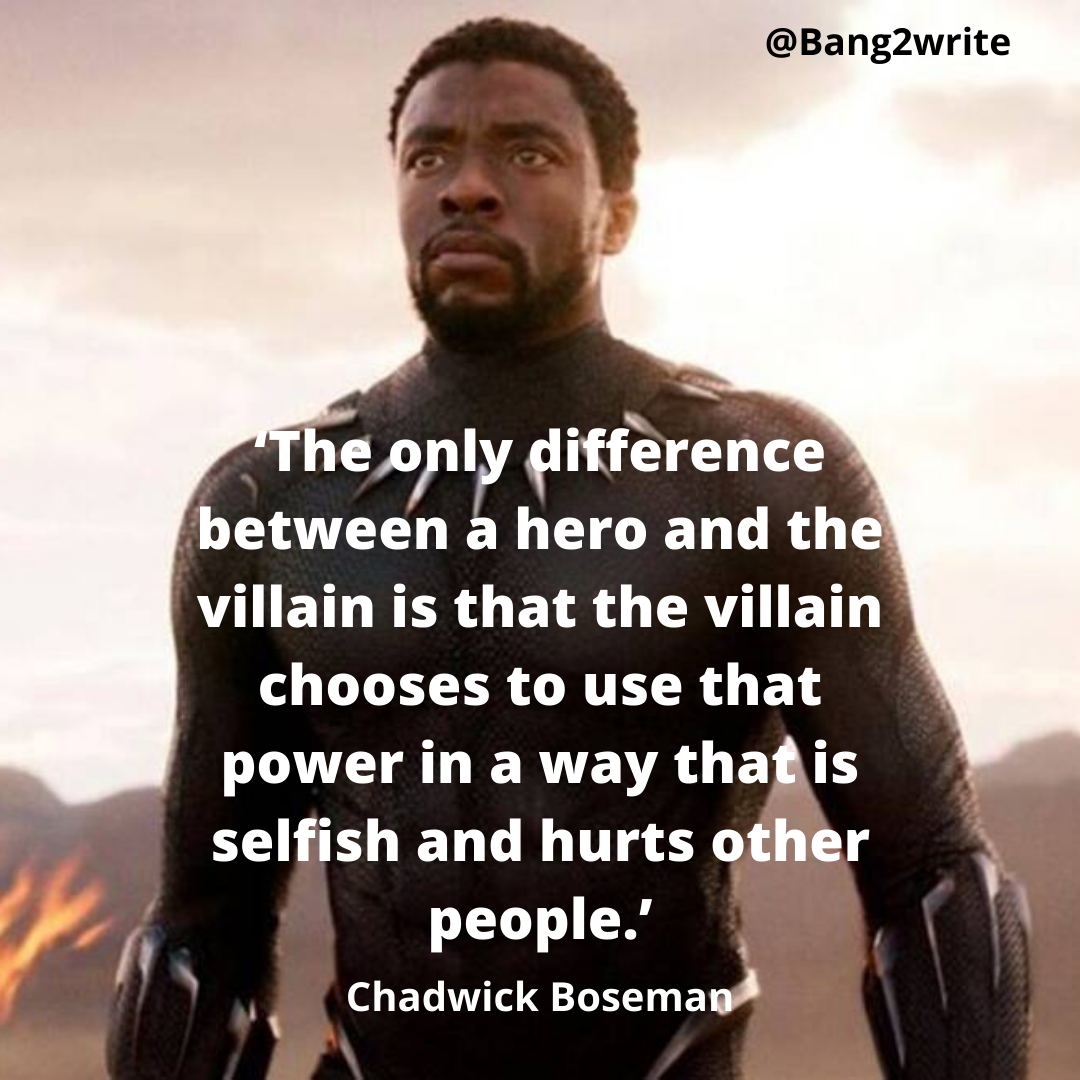 On Heroes And Villains

The last bastion of agents and producers – ‘white audiences only like white characters’ – is well and truly GONE. We have to keep the momentum going on diversity and inclusion.

‘The only difference between a hero and the villain is that the villain chooses to use that power in a way that is selfish and hurts other people.’

Chadwick makes a great observation about a villain’s worldview here. We have all met people who selfishly pursue a goal at the expense of others. Even when s/he is going for the same goal, a true hero is selfless, driven by duty and sacrifice.

‘A superhero movie is only as great as its villains.’

Marvel has proven this in the past 5-10 years without doubt. What made Black Panther so special was the fact its villain Erik Killmonger was RIGHT. His logic is flawless and Wakanda wronged him badly. T’Challa and friends are forced to correct their great nation’s grievous error. Sadly this is too late for Killmonger who takes no solace in being right … Because he does not win, he would rather die.

On The Creative Life

The creative life is HARD. A lot of people don’t realise this. They look at creatives and think they are messing about or having the time of their lives. The reality is very different. The road to creative success is a hard slog after hard slog, with no ending in sight.

Even if you achieve your wildest dreams, you still have to reset to zero and begin again. It’s like being in Groundhog Day but you don’t even get to drive off the cliff and blow anything up! So get working, because you will need to.

There’s a lot of creatives out there asking for permission or waiting to ‘make it’. What does ‘making it’ even mean?? I’m twenty years into my writing journey and I’ve worked hard, but I am not stopping anytime soon. I’ve smashed my goals and I have plenty more to go … But I am not waiting for someone to tell me what those goals should be. F*** that!!! 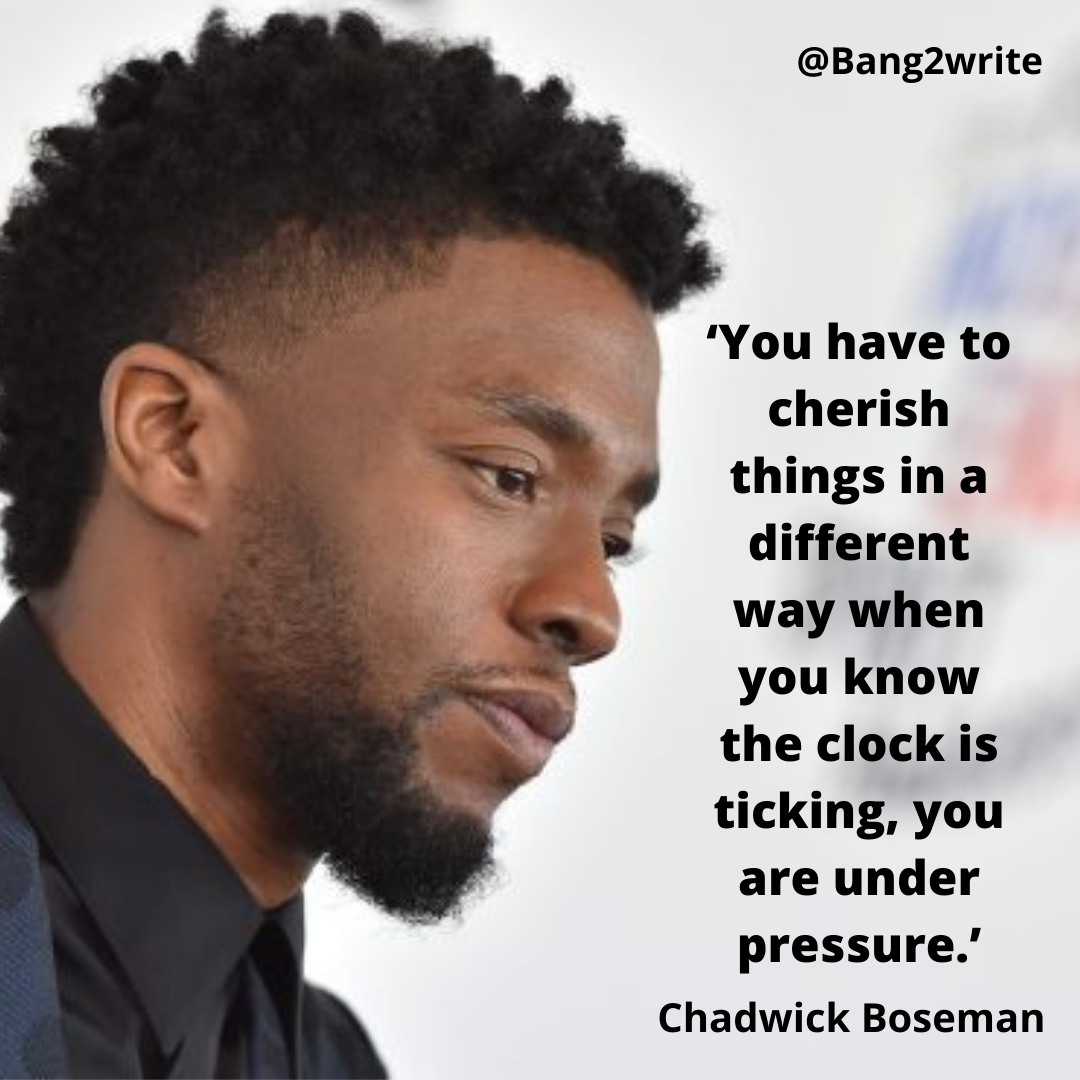 ‘You have to cherish things in a different way when you know the clock is ticking, you are under pressure.’

I don’t know if Chadwick said this pre-2016, or when he had been diagnosed. It doesn’t matter anyway: he is absolutely right.

I was lucky enough to survive my own cancer. Even so, it’s left me with a sense of how short life is … I can relate completely to what he is saying here. I have so much I want to say and do yet, but I am not much younger than Chadwick. Maybe I will get the chance, maybe I won’t. What I can say is like him, I will have cherished every moment.