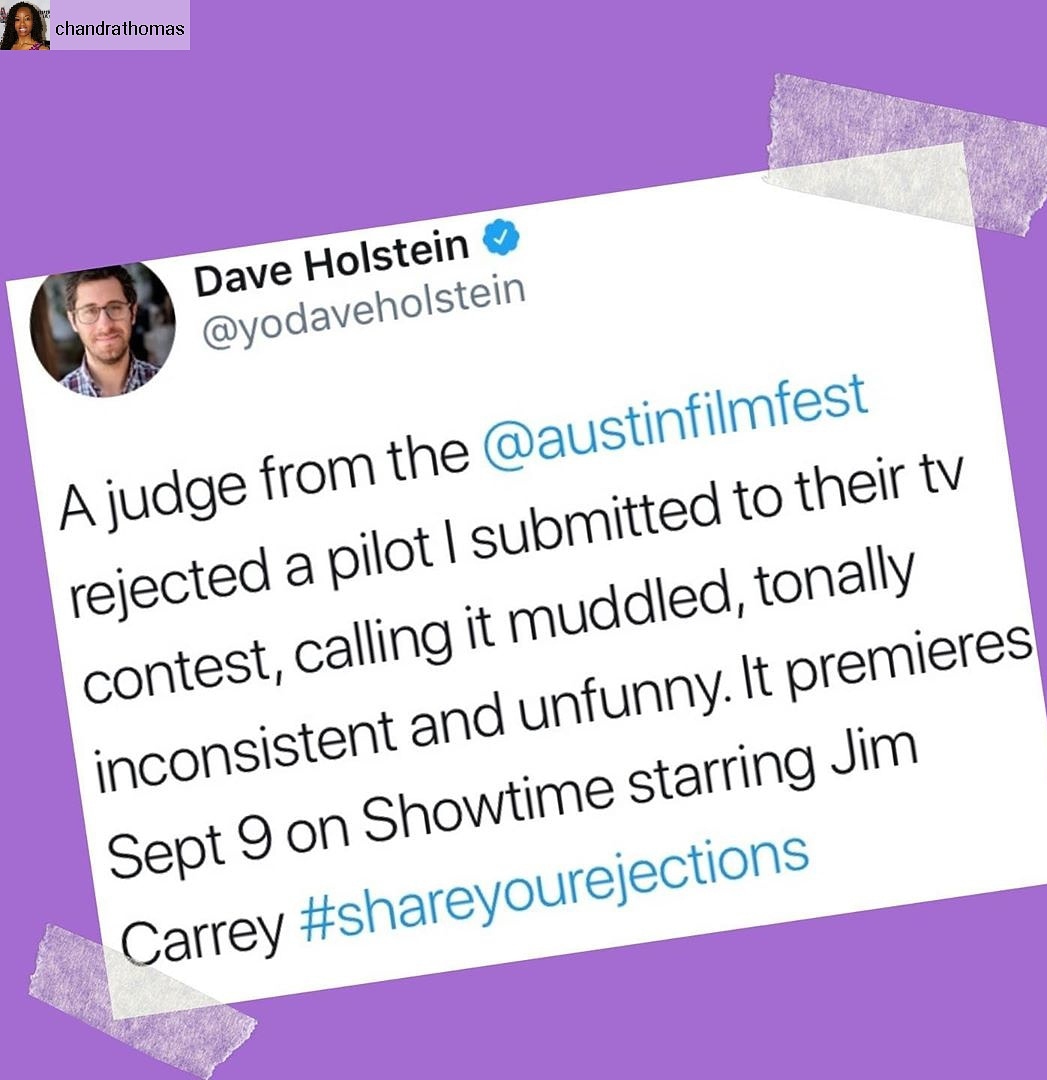 The thing about rejection is, IT STINGS. When we put all our hopes and dreams into a piece of writing and it gets rejected, it can feel devastating.

What’s more, rejection happens to ALL writers. It’s not something that ever magically goes away. Even if a successful pro writer gets most of his or her projects greenlit, there’s still some that will fall through the net.

Also, there’s no guarantee of success with target audiences! Pro writers’ work may fail at the box office, bookshops or streaming. That’s just the way it is.

Basically, rejection is part of a writer’s life, whether they are new or professional.

But This Is The Thing

I re-posted the above graphic on the Bang2write instagram recently. It is a tweet from screenwriter Dave Holstein and reads …

A judge from @austinfilmfest rejected a pilot I submitted to their TV contest, calling it muddled, tonally inconsistent and unfunny. It premieres Sept 9 on Showtime starring Jim Carrey #shareyourrejections

In case you didn’t know, Dave is talking about his show KIDDING. On reviews aggregator Rotten Tomatoes, at the time of writing the show receives a 76% Critics’ Consensus; plus an 83% Audience score. Now regardless of how we feel about comedy, Jim Carrey, or anything else, that’s pretty remarkable. Short version: KIDDING is a bona fide hit.

What I like about Dave’s tweet is he doesn’t argue with Austin here, or tell them they were wrong. That was the feedback they gave at that time. It could be those judges watch KIDDING and reflect they missed something on the page …  Or they may still not like the produced show. That’s fine and their prerogative as script readers. (FYI, there have been times I have been pleasantly surprised by produced stuff I have previously rejected. Other times, I have still thought they were absolute binfires. Again: way it goes).

But the thing is, Dave offers writers a crucial reminder and symbol of hope with this tweet. It tells us that rejections don’t necessarily mean our writing is automatically BAD if it gets rejected. It’s just ‘not right’ for that particular place. Crucial difference!

Next Time You Get Rejected

Remind yourself of Dave Holstein. Think of all the other professional writers or writers-in-training who will bring their visions to the world. None of them will have got a ‘free pass’. All of them will have had to negotiate the rocky road of rejection, just like you.

Rejected? 3 Industry Pros Tell You – Don’t Give Up!