No Writers, You’re Not Being ‘Excluded’ 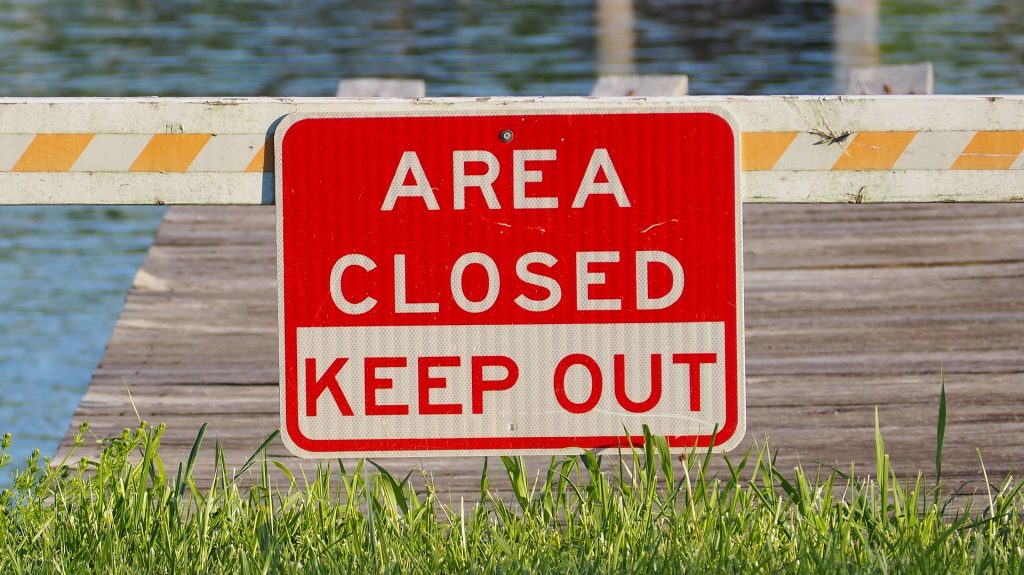 Feeling excluded from the industry? You’re not alone. It seems a lot of writers feel this way. If you’re part of the B2W Facebook group, you may have seen several mini-spats in there this week. These things always seem to jump up at the same time, because feelings run high and writers have A LOT of feelz.

The purpose of this post is to address why writers might feel excluded, but also why this is not necessarily the issue they think. Ready? Let’s go.

The first one revolved around the new BBC TV Drama Writers 2019 Scheme, which requires an agent or a credit to enter. A few B2Wers claimed they were being excluded, since they had neither.

It’s easy to see why on this one. After all, it’s hugely difficult to secure an agent or a credit. That said, it is not impossible. Plenty of writers have set their caps at doing this and they have gone on to do it. Why not you, too?

Also, writers need to be battle-ready. A huge opportunity like the BBC’s cannot afford to hold writers’ hands. Writers have to prove they can hit the ground running. But it’s a sad fact that many new writers just don’t know ‘enough’, whether that means craft or industry nous (sometimes both).

Rightly or wrongly them, industry types need to work out which writers are ‘battle ready’. One way they do this is by insisting writers have agents and/or credits. Whether we think is right or not, we also have to accept not meeting the submission criteria for a job is NOT the same as being excluded.

KEY TAKEAWAY: Keen on getting accepted for schemes like the BBC’s? First you need to work on that credit and/or getting an agent. It really is that simple.

The second mini-spat revolved around the ‘banning’ of all-male comedy writing teams by ITV. Instead, to get commissioned comedy writers must have gender parity in their writing teams. This means new teams that get commissioned should be a 50/50 split of men and women. Inevitably, this meant there were some claims male writers are now getting excluded as standard.

First off, as @dtmooreeditor points out below, all-male teams are not ‘banned’, it’s a stupid clickbait headline. Secondly, most people agree that comedy is male-dominated and something needs to be done about the inclusion of female voices … After all, mere encouragement has not done much for female representation the last two or three decades. 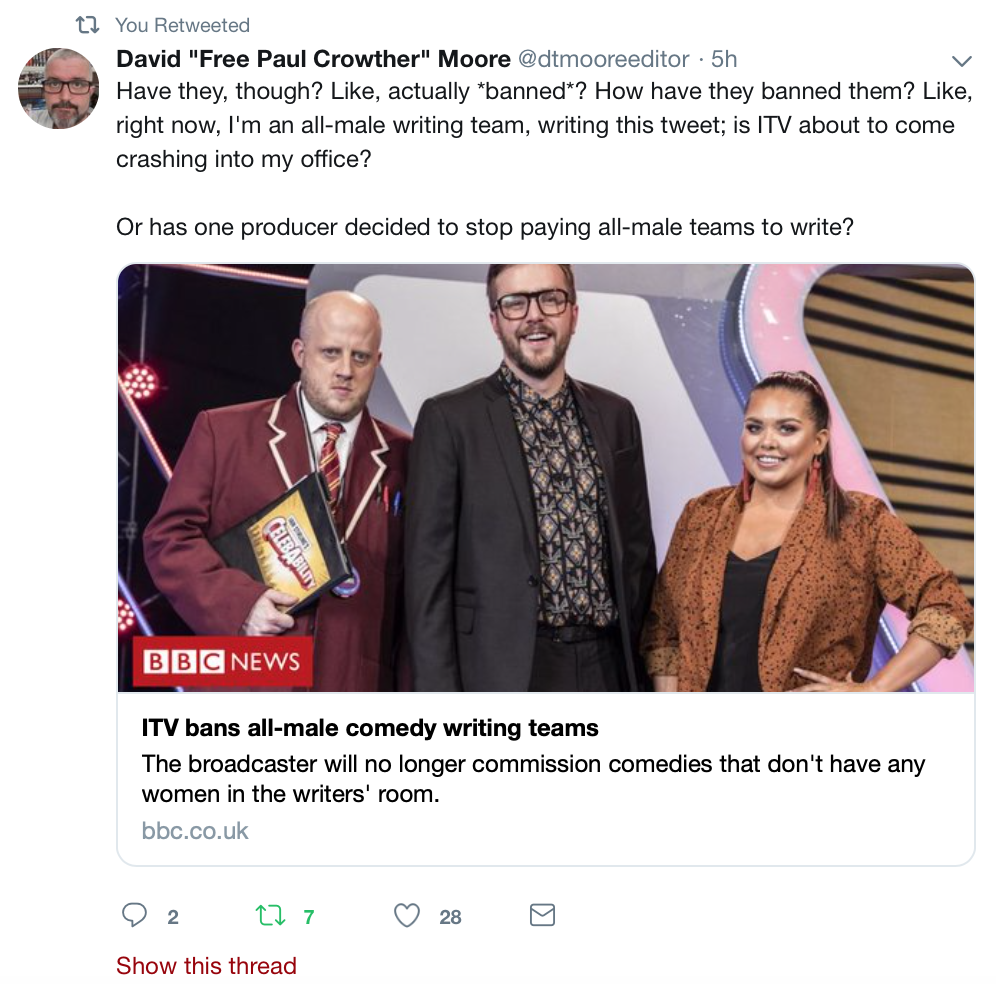 On top of all that, dtmooreeditor also posits that ITV has the budget and can set its spending however it wants in this particular round of funding. If that includes a drive towards diversity and inclusion, so be it. Again, not meeting the submission criteria for a job is NOT the same as automatically being excluded. READ THE WHOLE THREAD HERE or click on the pic.

Lastly, politics aside, in  this post-Fleabag, Russian Doll, internet-savvy age, how hard is it to find female comedy talent??? If male writers find it extraordinarily difficult to locate them, they’re either not very imaginative or very organised. You need to be both to be a pro writer!

KEY TAKEAWAY: Comedy and screenwriting generally is still a male-dominated profession. No one is ‘banning’ anyone! Rather than let your emotions run away with you, think about what diversity and inclusion really means and WHY it’s needed.

Look, I Get It

The odds in this writing lark ARE terrible. Add other challenges and grievances and it can feel completely impossible. This is why writers feel excluded.

But let’s set those emotions aside for a moment and think logically. What are YOU doing to ensure you have what the industry wants? And I don’t mean just writing that great script or novel. I mean literal career strategies to ensure you have the goods to make gatekeepers take a chance on you, such as:

We have to remember it’s all about CUMULATIVE build up. We’re in this for the long haul and there’s no short cuts. That’s just the way it is. We can fight this – and lose – or accept what we need to do and get on with it.

Don’t forget, I know where you are coming from. Back in the day, I had no agent, no money, I lived in the middle of a field in Devon. I had no contacts and I was just a teen mum. I couldn’t even drive a car and there were no buses out there.

It would have been easy to express defeat before I even started. Instead, I recognised my career was in MY hands and I had an internet connection. I knew I could make my way into the writing career I’d always wanted via the world-wide web. As a result, Bang2write was born and the rest is history.

You CAN do this too, B2Wers. We are all rooting for you! Don’t forget to join us in the Facebook group if you haven’t already.