10 Rocky Quotes To Inspire You As A Writer 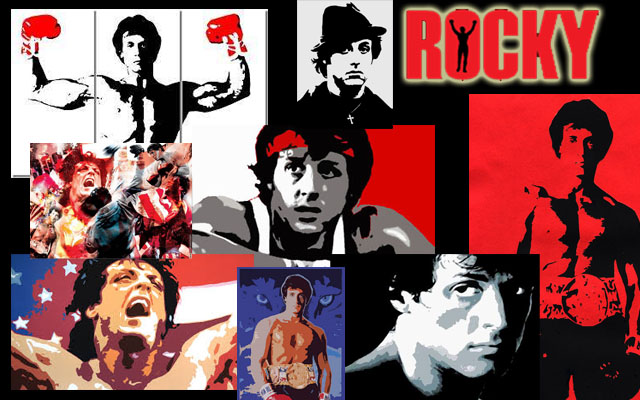 The Patron Saint Of Writers

That’s right, Rocky Balboa is the patron saint of writers … and I’m gonna illustrate why. But first, here’s a little story for you.

Once there was a scrappy little girl, who was all knees and elbows, who wanted to be a writer. The first time she realised this, she was about 6 years old. Her mother had a big bookcase on the landing, filled with grown up books. The little girl’s Mum had weird reading taste, so some of the covers were mad-scary, but that didn’t stop the girl from dreaming about one day seeing HER name on the spine of a book.

But as well as books, the little girl liked movies. She first started watching Rocky movies around this time and believe it or not, thought Rocky Balboa was a real person. Though she realised by the time she was ten or eleven that Rocky was actually a fictional character, it didn’t make any difference: she was hooked.

Though the little girl hated sport generally – and hated boxing and violence most of all – she knew instinctively these were not ‘just’ sports movies. When he’s not being punched in the face and turned into salami by various bad-ass antagonists, Rocky is actually quite the philosopher! And this really resonated with the little girl, who has now carried a love for Rocky Balboa in her heart for thirty years.

Yup, you guessed it: that little girl was MOI! And here’s a top 10 of my fave Rocky quotes that keep me inspired as a writer. Hopefully, you will too. Ready … GO!

1) “Nobody owes nobody nothing. You owe yourself.”

So, you want to be a writer, just like Rocky wanted to be a champion boxer. We all have to find our own way; no one’s path is identical. Some of us will be lucky enough to have supportive partners like Adrian; others may have the added challenge of loved ones who don’t get it. Some will have more money to invest in their careers; others have less. Some will have existing contacts to mine; others will have nobody and come into the industry completely cold.

But one thing that should bring us together is our realisation that we owe OURSELVES to give our journey 100%, no matter what anyone else might say, or where we start from. 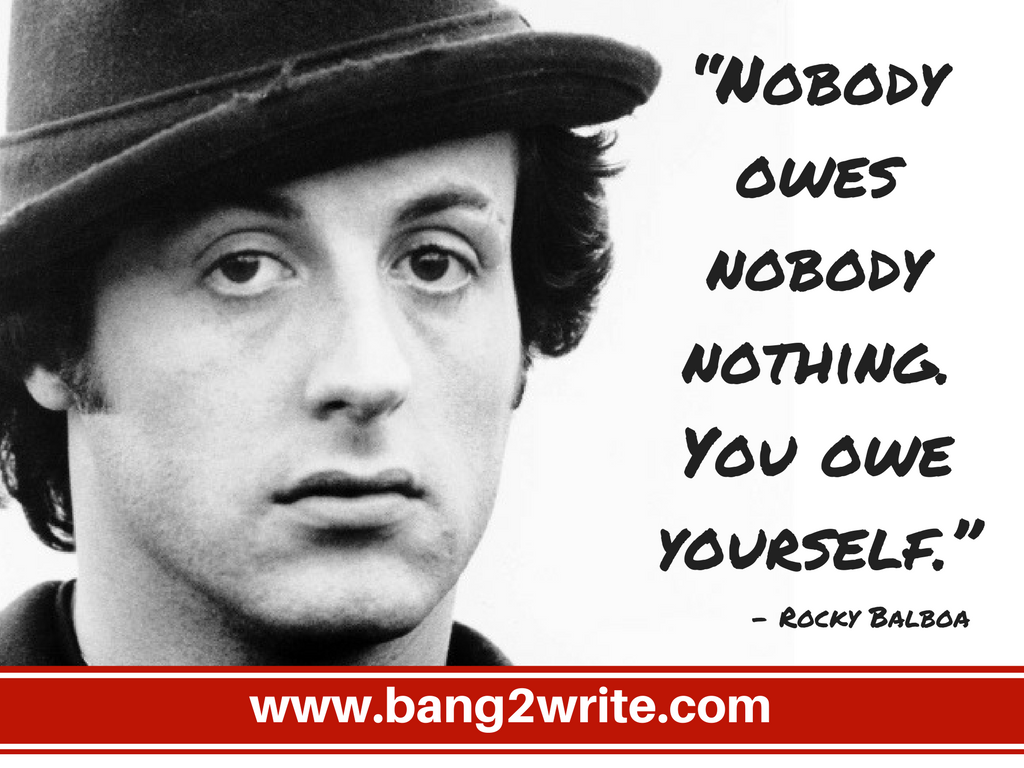 2) “I believe there’s an inner power that makes winners or losers. And the winners are the ones who really listen to the truth of their hearts.”

As someone who has worked with writers for nearly 15 years now, I truly believe Rocky is right on this one. I very quickly come to recognise which writers will stay the course and who will fall by the wayside. Which one are you??

3) “Life’s not about how hard of a hit you can give … it’s about how many you can take, and still keep moving forward. That’s how winning is done.”

Like Rocky says here, no winner ever got the top without a few hits along the way. Some will be small and only rattle your teeth; others will feel like they encompass your whole body and rock you to your core. But the key is bouncing back and keeping going, no matter what.

4) “Our greatest glory is not in falling, but rising every time we fall.”

You will fail. It is necessary, on the route to success. No one leads a charmed life and failure is a brilliant learning curve. It is never final. But it will happen, so get used to the idea now … And like Rocky says, be ready to get back up again.

Don’t be a desperate writer, willing to be exploited just to see your name in the credits. Find allies, collaborators and mentors. Arm yourself with the knowledge to make informed decisions. Don’t be someone else’s stepping stone or whipping boy/gal. 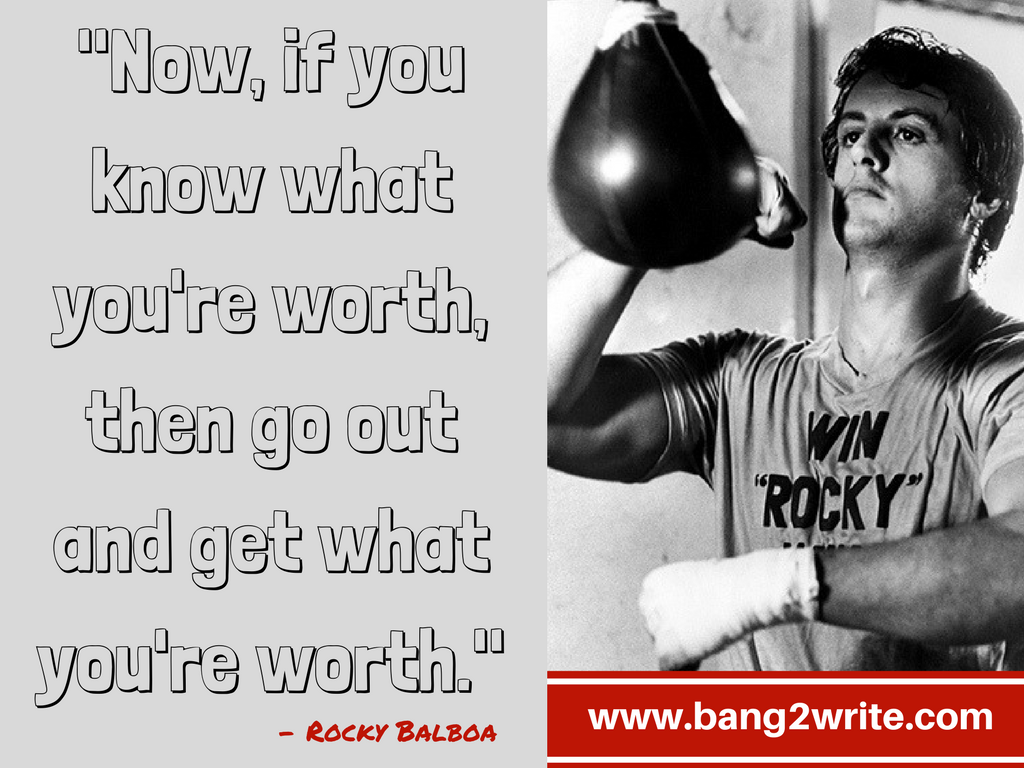 Whether you want to be a novelist or screenwriter – or both! – you need to believe in yourself. Don’t bother asking others to confirm it, they don’t know. Like Rocky says, you have to SHOW them by believing yourself and going out and doing it.

7) “Let me tell you something you already know. The world ain’t all sunshine and rainbows. It’s a very mean and nasty place and I don’t care how tough you are, it will beat you to your knees and keep you there permanently if you let it. You, me, or nobody is gonna hit as hard as life.”

If we swap ‘life’ for ‘the industry’ here, then Rocky is on point. It can be savage out there – either from sharks and scam merchants, or because everything is moving so fast you can get left behind all too easily. Accept it will feel like you’ve been chewed up and spat out sometimes … and that it will make no difference whatsoever if you really want to be successful. So like Rocky says: keep going!

8) “Going in one more round, when you don’t think you can. That’s what makes the difference in your life.”

It’s easy to write when things are going well. But keeping go, against a tidal wave of rejections, bad reviews, crappy colleagues … Like Rocky posits here, that takes real guts.

9) “Until you start believing in yourself, you ain’t gonna have a life.”

If you want validation from others for your writing, you may get it, but you may not. Then what?? Rocky is dead right here – self belief is key to getting ahead. Every writer has to have a well of self belief they can draw from, otherwise you might as well give up now.

10) “Every champion was a contender that refused to give up.”

This one just says it all … Yes, writers face rejection, radio silence and sometimes, worse. But if writing is your dream, then AGAIN — just like Rocky, you have to get back up and keep throwing those punches. What is the alternative? 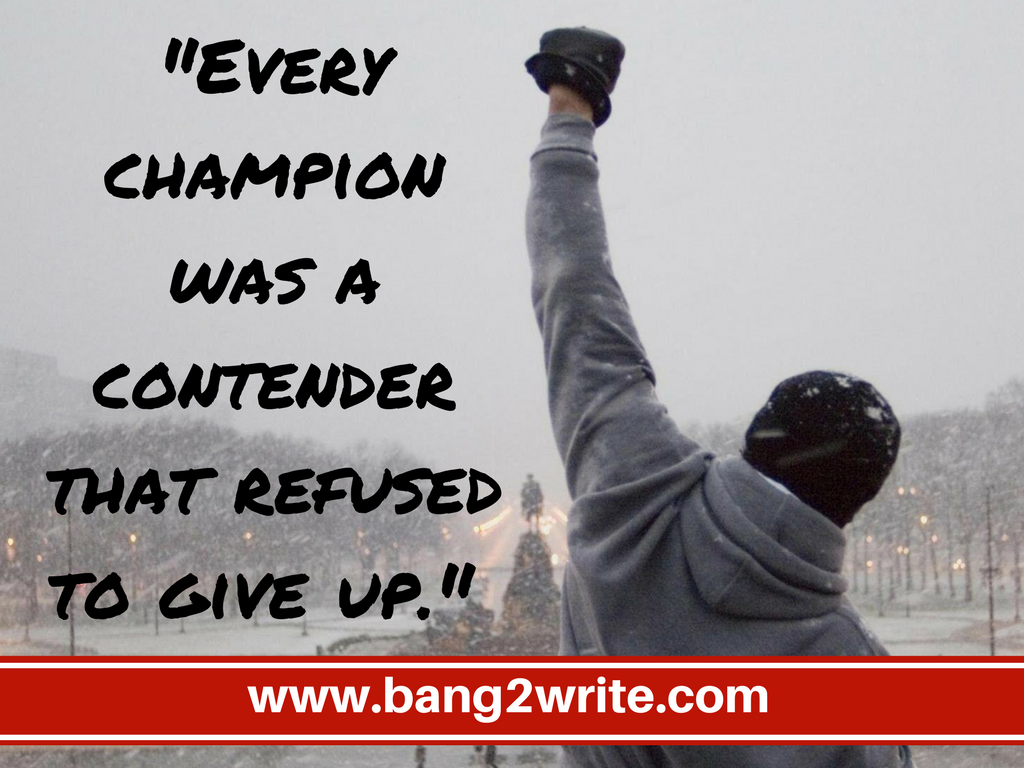