5 Debates On Female Writers That Really Need To Die 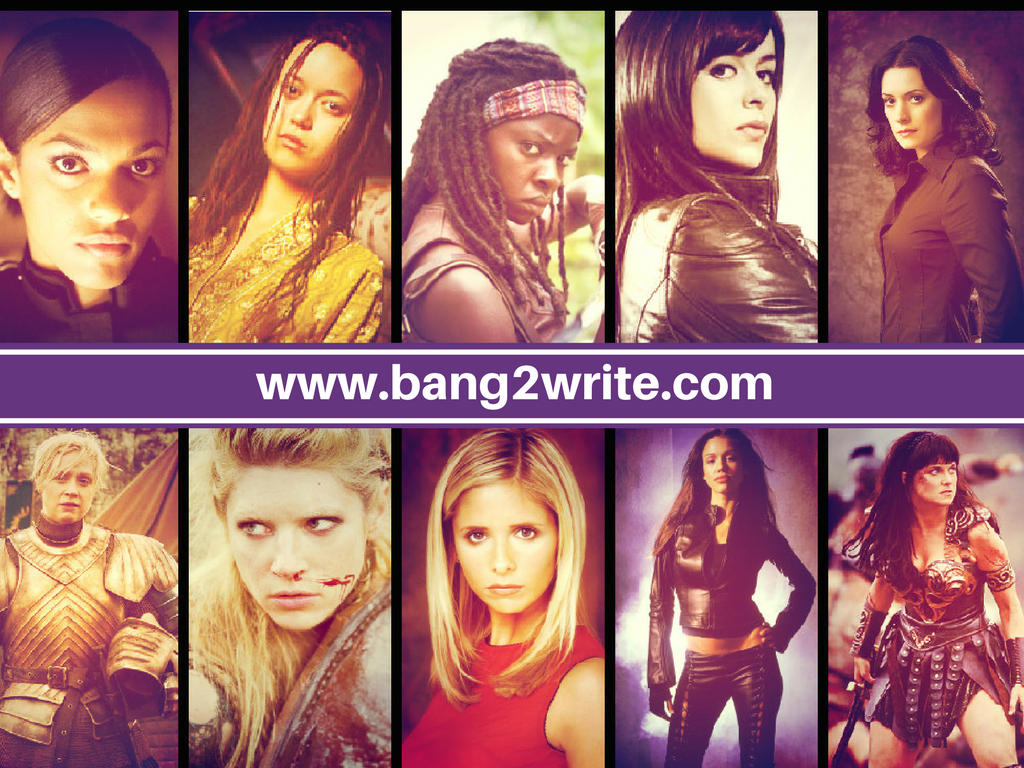 Yesterday, in the Fantasy Faction Discussion Facebook group, people were asked how many books they’d read this year. They were also asked for the gender split.

Of those who provided figures, female readers came down 53/47 in favour of female writers, while male readers were 75/25 in favour of men. This is hardly surprising, given how women struggle for visibility in a conservative genre, but the results attracted the usual slew of excuses to justify an obvious bias.

So, I’m here to smash five assumptions about female writers which are too often used to excuse or even ‘forgive’ outright sexism, not only in fantasy, but other genres such as Sci-Fi, Horror and mediums such as scriptwriting:

Numbers always gets the top spot on the assumptions chart. Because female writers are served a thinner slice of the review pie, it creates the illusion of absence, leading to claims that women don’t write in certain genres or that they don’t submit to publishers. This is, of course, completely false. The books are out there; the coverage is not. For further reading, see the magazine Strange Horizons, which publishes annual stats on books reviewed across the SFF industry. MORE: Gender Bias In Film: 5 Key Findings

I have yet to witness a cogent extrapolation of this claim, which can only be born of historical stereotyping. Almost every male-authored book I’ve read contains a romantic storyline, which is seen as perfectly acceptable.

In a woman’s book, however, the same focus is often dismissed with disgust as ‘romance.’ Take a step back for a moment and you’ll realise how ludicrous this particular assumption sounds. After all, what is a story without characters? What are characters if they don’t exhibit feelings? MORE: 5 Problems With Female Leads

3) Women are supposed to write about their experience of womanhood

Equally you can replace women with PoC / LGBTQ / any marginalised group. In short: no they are not. Cis white men aren’t held to this bizarre requirement, so why should anyone else be? Women are not here to teach you about other women or ‘feelings’; PoC aren’t here to teach you about their culture. Art does not have an obligation to educate, just as a writer cannot be held to account for a reader’s limitations. MORE: Top 5 Diversity Mistakes Writers Make 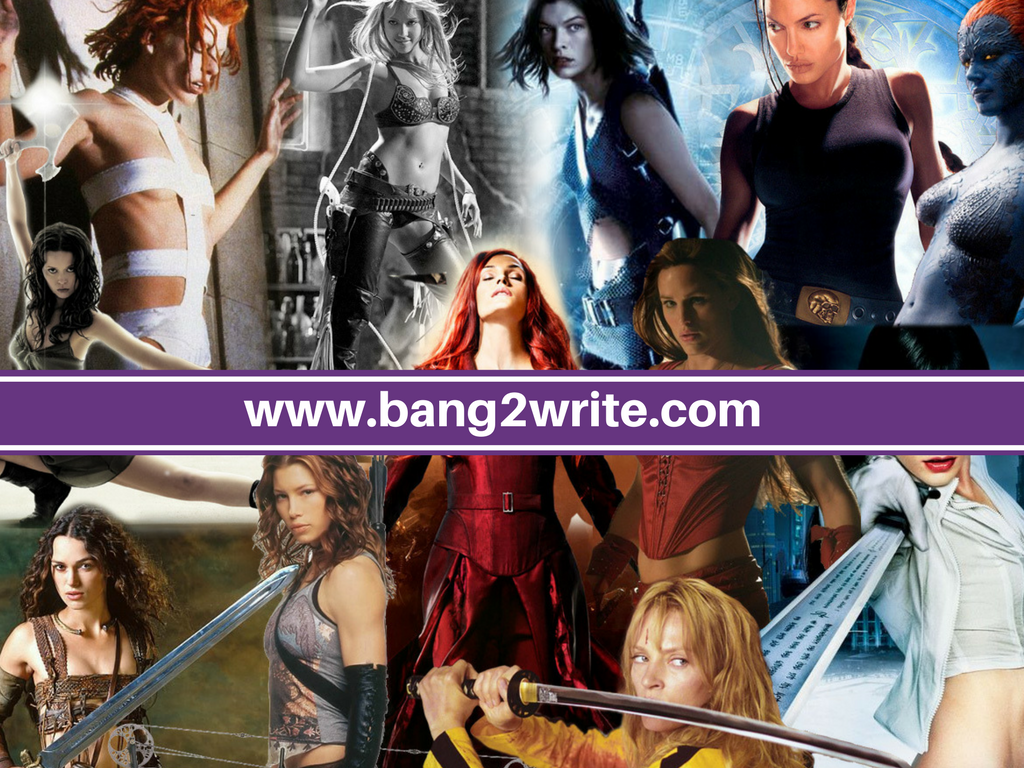 The rapid growth of the YA market with its prevalence of female writers has led to a wider assumption (especially among the adult genre community) that all female writing is YA, or explores issues associated with YA. The only women exempt from this belief are the usual handful of ‘token’ veteran writers offered up as proof that men do indeed read books by women.

Something similar happens with screenwriting. There is a lack of female scriptwriters generally – and those who do break through are overwhelmingly associated with romance, period drama and issue-led YA-related properties.

Despite the fact that a simple Google search is enough to smash this assumption (Jane Goldman? Diablo Cody? Patty Jenkins? Kathryn Bigelow? Shonda Rimes???) the problem remains. Again it’s down to stereotyping and, I think, a long-running association between women and genres that are considered light, entertaining or ‘angsty’. MORE: The Ultimate Blueprint On How NOW To Write Female Characters

This popular argument sounds laudable until you realise that it’s actually an abdication of responsibility. Gender blindness is easily used to perpetuate existing biases under the guise of ‘being fair’. Where prejudice does exist, for whatever reason, it must be acknowledged, not hidden beneath the illusion of an equal world. MORE: Why Strength Is The Missing Ingredient In Female Leads

So, the next time you’re tempted to voice an opinion on why women in certain genres struggle for visibility, remember –

– It’s not about numbers. There are plenty of female writers out there. Look harder!

– A book or screenplay  is not automatically a romance just because a woman wrote it.

– Women are as entitled as men to write about whatever they want. We are not solely representative of ‘issues’!

– Gender does matter. If your bookshelf or Netflix queue is 75% male, don’t pretend a bias doesn’t exist.

BIO: Lucy Hounsom is the author of The Worldmaker Trilogy, the first book of which, Starborn, was shortlisted for the Gemmell Morningstar Award for best fantasy debut in 2016. She’s also a Waterstones bookseller and co-hosts the geek feminist podcast Breaking the Glass Slipper, which discusses women in SFF. She lives half the time in Devon with two cats and the other half in Skyrim. Follow her on Twitter as @silvanhistorian.

Many thanks to the talented @lazyhedwig who has provided this ‘women in SFF’ bingo card … Next time you see a thread catch alight on this issue, don’t get upset, get ticking! 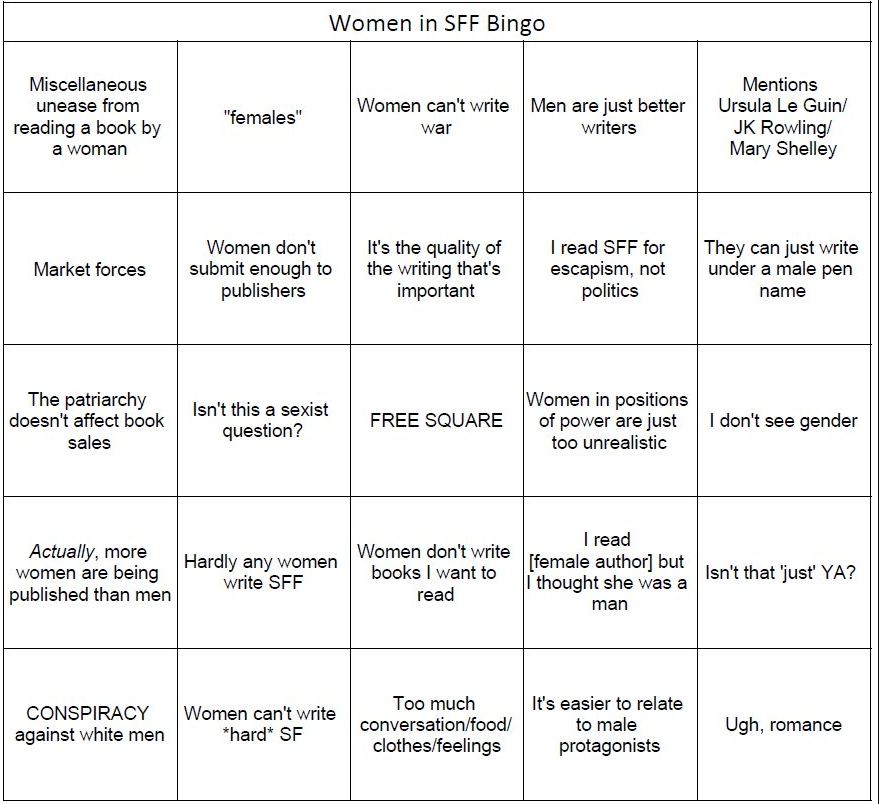