An Important Diversity Reminder From KING ARTHUR LEGEND OF THE SWORD

Following the run away success of my previous article, The Powerful Lesson ALIEN COVENANT Teaches Writers, I thought I’d have a go at dissecting another recent release. This time, it’s the turn of Guy Ritchie’s KING ARTHUR: LEGEND OF THE SWORD.

Living in the South West most of my life, I’m heavily into the King Arthur legend. I’ve watched countless adaptation: some good, some poor, most of them middle. So I was always going to want to see this one and see what Guy Ritchie of all people had done with it!

As before, I’ll break the movie down in the style of a script report, though it should be noted these thoughts come from the movie, NOT the screenplay in isolation. Ready? Then let’s go! 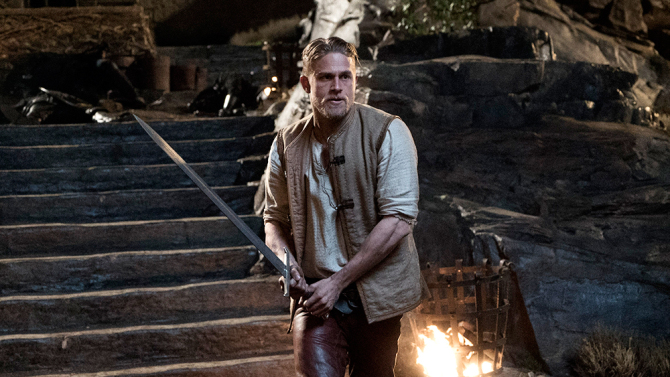 As with so many epic fantasy films, it LOOKS fantastic. It starts in the midst of a war with the mage Mordred and with its mythical, nightmarish feel, borrows more than a little heavily from the work of Zak Snyder throughout, especially 300. There are all kinds of colossal monsters and beasts from Hell and really encapsulates the medieval magical horror show that is befitting of Arthurian legend, imho.

Because of this, the general fighting, action and set pieces are also top notch: I found them exciting and fun (and who doesn’t like men with super-abs fighting? Well maybe *you*, but I EFFING LOVE IT!). Charlie Hunnam is perfect in the role as far as I’m concerned; he looks like I imagine (a super-fit and gorgeous) King Arthur.

The music is fantastic, plus I also enjoyed the fact this movie is an essentially KING ARTHUR: ORIGINS story. Jude Law is formidable and electric as Vertigern, the evil mage uncle, gives the piece a Hamlet-esque style feel (if Shakespeare was on crack!), plus I liked the message regarding Arthur’s ‘drive’ and how adversity makes us who we are.

Another thing I liked a great deal is its diversity. BAME characters exist as standard in this storyworld. In crowd scenes, there are  BAME faces, male and female; adult and child.  There is no explanation as to why the likes of main secondaries Bedivere, Wet Stick and George are black, mixed heritage or even Chinese respectively in medieval England. Why should there be? This is fantasy and not a historical drama by any stretch of the imagination … But even if it was, immigrants have ALWAYS been here. This white-washed version of history the Brits have is literally out-of-date!

Lastly, I also loved its devil-may-care attitude and ‘up yours’ to the so-called ‘rules’ of screenwriting, such as:

– No to expositional inserts at the beginning? Got one.

– No to Rocky-like montages? Got more than one!

– No to ‘dream waking’? Got what feels like half a dozen!

Also, this is problem the only version of KING ARTHUR that’s crossed with a gangster movie. It’s classic Guy Ritchie: unapologetically masculine, more than a little bit bonkers … So this goes to show that if you break the so-called writing ‘rules’, go in there and SMASH them unapologetically and do it YOUR way.

I could talk about how tonally it’s screwy as hell: this is way too scary for kids, but probably not quite right for adults either. But really, let’s put those all-important two words under the microscope:

As with so many epic blockbusters, it’s all about the menz. Female characters are totally sidelined in this narrative. In fact, there are two female characters killed within the first three minutes, to motivate both Arthur AND Vertigern. It’s like, seriously? It ain’t 1992 anymore, guys!

From there, we have The Mage, who had many great things about her. I liked the fact she’s never once attracted to Arthur (or her to him) and  gender-flipping Merlin is a GREAT idea. But really, she’s what I call an ‘Expositional Jo’, facilitating Arthur’s journey throughout. In short, Ritchie et al have a great idea and don’t follow it through to a fully developed, realised and authentic female lead. Le Yawn.

Even Maggie, the inevitable double agent within Vertigern’s court, is criminally under-used. Sure, we know this secondary character’s arc of old: she will be found out and made an example of, except she isn’t and just spirited away. WTAF? We could have had some excruciating tension around this character – will they/won’t they find her out? – but she just dances around the periphery. Again: yawn.

If you follow what’s happening in Hollywood-land, you’ll know this movie resolutely tanked at the box office. Whilst this may not mean much in the long term – Guy Ritchie has a huge, young male following who love DVD – this nevertheless  probably means no more King Arthur franchise and that’s a shame, when so much of it was such fun.

Diverse characters are a HUGE deal in 2017 and beyond. With King Arthur: Legend of the Sword, word got out very quickly: this is a fun popcorn movie that has yet again sidelined female characters.

On this basis, I would bet real money on this as the reason as why it tanked. Women in my generation, plus their male allies and those coming up behind us are extremely vocal nowadays and have started voting with their wallets. Where there are excellent female characters – AS WELL AS male ones – there is $$$$ to be made. Hell, the movies don’t even have to be that great; they just need to be inclusive!

It doesn’t have to be either/or on diversity, female characterisation versus BAME characterisation. IT CAN BE BOTH. It’s not rocket science: stop making it all about the blokes as standard.

previousAre You A Binge Writer, Or Do You Write Every Day?
next5 Strategies For Successful Self Publishing On A Tight Budget