6 Things I Learned From Making Someone Else’s Script 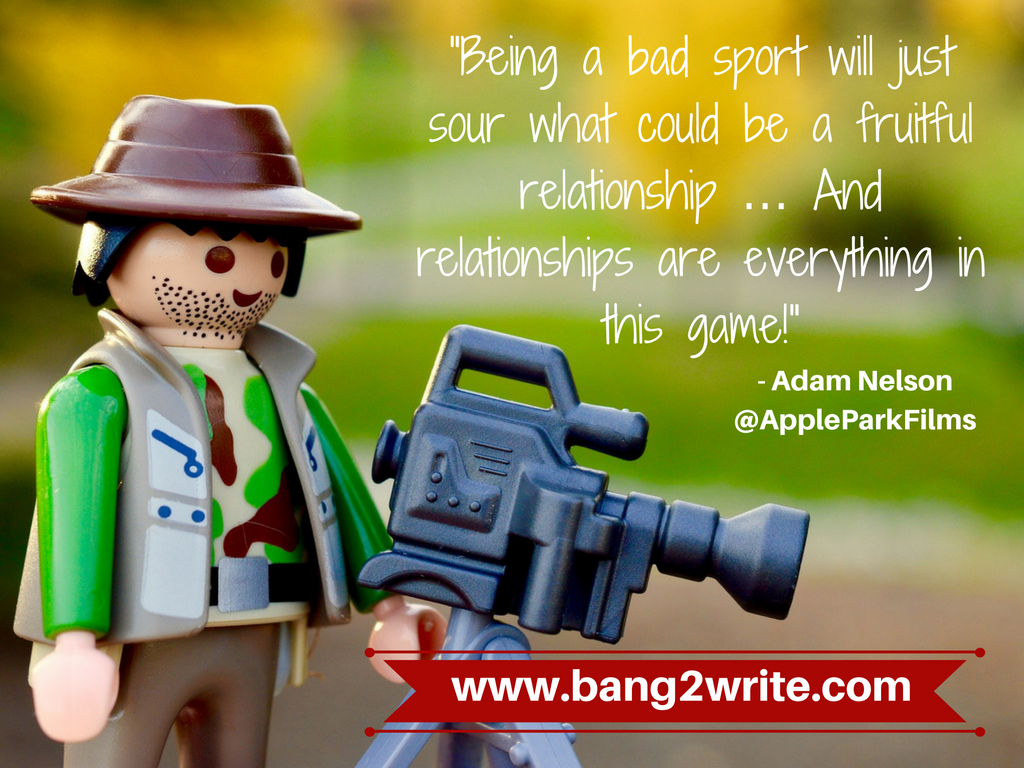 2015 ended on an incredible high for Apple Park Films and we were keen to capitalise on the momentum this gave us, so we set about developing a short film. As a writer I struggle with the short film format, so I put out an open call for short film bloglines. We received over 200 applications, which lead to us producing Emotional Motor Unit.

What follows are 6 things that I learned from being on the other side of the process and working with another writer’s work:

This one may seem like a no-brainer, but out the two hundred applications we received there were still far too many who didn’t adhere to this. We did an open call for loglines because we wanted to buy a script that was ready to go, but didn’t have time to syphon through the sheer amount of scripts we knew we would receive. One gentleman sent a package containing no less than twenty short film scripts and others sent me résumés and told me to get in touch so we could develop an idea together.

2) Your logline is your selling point

We received two hundred applications to our call; many of which contained at least two loglines and some up to five. The team had to shortlist that number down to twenty-five. You may have had an amazing script, but if the logline didn’t grab our attention in the first pass then it didn’t matter.

TOP TIP: A great logline should jump out at the reader and tell them everything they need to know. MORE: Top 5 Longline Mistakes Writers Make

3) Proper formatting is the least you can f**king do!

I stole this particular line from the live script edit Lucy hosted during the 2016 London Screenwriter’s Festival. We requested 25 screenplays; 3 of them were formatted incorrectly. These weren’t minor mishaps; all three used the wrong font and wrong layout. It may make me sound miserable, but poor formatting suggests you haven’t learned the basics of your craft, and so may not be able to craft an engaging story. With all the free software out there today there really is no excuse.

TOP TIP: Make sure your formatting doesn’t interrupt the ‘flow’ of the read. Check out The B2W Format 1 Stop Shop for every major mistake or issue Lucy sees on a regular basis, plus what to do about them.

4) If a Producer/Director says no, it’s not personal

One chap sent an abusive email stating that his résumé should have been enough to demonstrate meeting him was ‘worth’ my while. It wasn’t and he needs to get over himself.

Another applicant called me a hack that didn’t know what he was doing – this individual hadn’t formatted their script correctly.

These are just two of the many replies like this we received. Behaving this way makes you seem difficult to work with, which would come to a head when we have to start making changes.

TOP TIP: An open call literally opens a door to you … Don’t slam it shut with a shitty attitude! MORE: Can’t Get Read? Yes You Can! 16 Top Tips On Becoming A Writer

5) There is a difference between brevity and thin writing

Your script shouldn’t be littered with camera directions, false movement and unnecessary descriptions, we all know this; at the same time your writing needs to excite the person reading it. Brevity means getting your ideas across in a visual, action lead, exciting manner, in as short a space as possible. Thin writing is unimaginative, boring and usually consists of character movements and dialogue. There’s no pizazz or life.

Directors need to be excited by your writing, if we’re not excited then we won’t expect anyone else to be and the best way to get us excited is to write in a way that we can see, feel and smell the world and the characters. Of the 25 scripts we received only three of them excited me and jumped off the page into my head.

TOP TIP: Show us your writer’s voice, we don’t need vanilla screenplays! MORE: How To Identify And Own Your Writer’s Voice

6) Be open to discussion with the Director about changes

Xènia, the Writer on Emotional Motor Unit, was incredibly open to the changes we needed to make, many due to budgetary constraints, but also because of the age gap between our two leads we cast and how that would change the dynamic of the central relationship.

The one thing that impressed me most was how she stood her ground on one particular point I wanted to change. She did so in a manner that was honest, open and felt like two people collaborating as opposed to a wrestling match for control.

In the end we compromised and when filming the scene I realised she was right. Much like how you respond if you get a ‘no’, when you feel a note from the Director is wrong don’t be a dick about it and refuse the note — talk about it! Sometimes the Director will overrule you and that’s the nature of the medium I’m afraid.

TOP TIP: Being a bad sport will just sour what could be a fruitful relationship … And relationships are everything in this game!

BIO:  Adam Nelson is a Writer/Director from Portsmouth on the south coast of England. His work includes the critically acclaimed and award winning films Little Pieces and Emotional Motor Unit. He owns the production company Apple Park Films and is currently developing his second feature film.