This isn’t surprising, because as anyone who’s heard or read pitches knows, many spec screenwriters will specify ‘Horror/Thriller’ as their genre.

But repeat after me, Bang2writers: THIS IS A VERY BAD IDEA.

Of course mixed genre pieces exist, but they are the exceptions, NOT the rule. Put simply, if a writer says their screenplay is a ‘Horror/Thriller’, 9/10 they are mistaken. This means the literary agent, producer, filmmaker or script editor now thinks that writer doesn’t know what s/he is talking about. Oooops! Supersadface.

The Answer Is Obvious

It’s very simple, if you think about it. Horror is HORRIFYING and Thriller is THRILLING!

But what happens if you find being horrified, thrilling?? Or if your Thriller has HORRIFYING moments?? EEEK. This is where lots of writers confess to becoming unstuck. More, next after the pic. 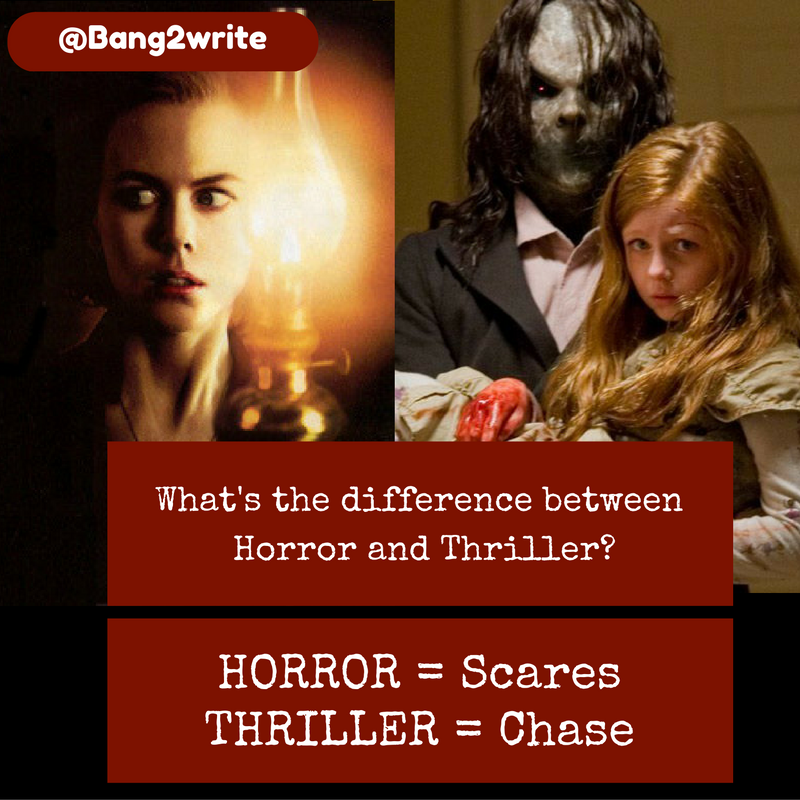 The Beast Vs. Mystery

In horror, a beast must be vanquished. The problem is placed upfront – a serial killer; a monster; an alien; a ghost. This problem will stalk, intimidate and threaten characters throughout, often picking them off one by one. In the resolution, the tables will be turned: the characters will vanquish said beast, often at massive cost to themselves, but they will be victorious.

In a thriller, the watchword is MYSTERY. *Something* is happening – but the characters in the centre often don’t know exactly what and/or why. They will chase after this mystery in order to solve it – whether it’s a conspiracy, a supernatural occurrence, an abduction or something else.

But even in less grotesquely flamboyant horror, the story will relate to a cultural, base fear most of us have. Fears for our children (especially them dying); fears of being taken away/sent into a hell-like place; fears about sex, rape, pregnancy or other violations; fears of being eaten alive, being dismembered, or burned alive. What’s more, the frame is unstable and makes us worry FOR the characters in it … And yes, maybe even freak out and scream where said characters are attacked and/or killed. This is why groups of characters are so popular in horror stories.

In comparison, thriller invites the viewer to put themselves in the protagonist’s place. The story will ask, ‘What would YOU do?’ somehow, often relating to a more intellectual fear most of us have, such as our children being kidnapped; of abduction/being held hostage; of living in an unsafe home; having our identities stolen; being watched or persecuted in some way; of authorities who cannot be trusted, such as governments, teachers or medical staff. This is why the lone protagonist in Thriller is so popular.

In Horror, the story will have moments of ‘quiet’ or ‘lulls before the storm’. A Horror will typically create set pieces of the moments when the beast will strike next, with every other scene being an anticipation OF those strikes. This creates dread.

Thrillers will also create set pieces, but in direct comparison to horror, the thriller will utilise tension and suspense throughout, typically creating ‘rising action’. This will take our (often lone) protagonist through the various obstacles in the narrative, each one bigger than the last.

I’ve written before in detail about the difference between horror and thriller, using the 2007 movie WIND CHILL as an example. Though it would be foolhardy to say mixed genre pieces aren’t possible (because they are!), I argue in this article that there’s no such thing as a ‘Horror/Thriller (as standard)’ as many spec screenwriters insist in their pitches. In other words, stop hedging your bets, mofos!!! Find out exactly what your story is!!

Good luck with your genre pieces!

3 thoughts on “What Is The Difference Between Horror And Thriller?”