How To Write Tight And Visual Scene Description

Every screenplay needs to be VISUAL. Basic advice yes, but you’d be surprised how many scripts lack that visual quality!As a script reader, I’ve noted on this blog many times that both ACTIONS and VISUALS are lacking from about 90% of spec screenplays.

Check out this GREAT case study from novelist Victoria today on making the leap from prose to screenwriting … ACTUALLY  her words of wisdom are useful to ANY screenwriter IMHO! Be sure to bookmark this page. Enjoy! 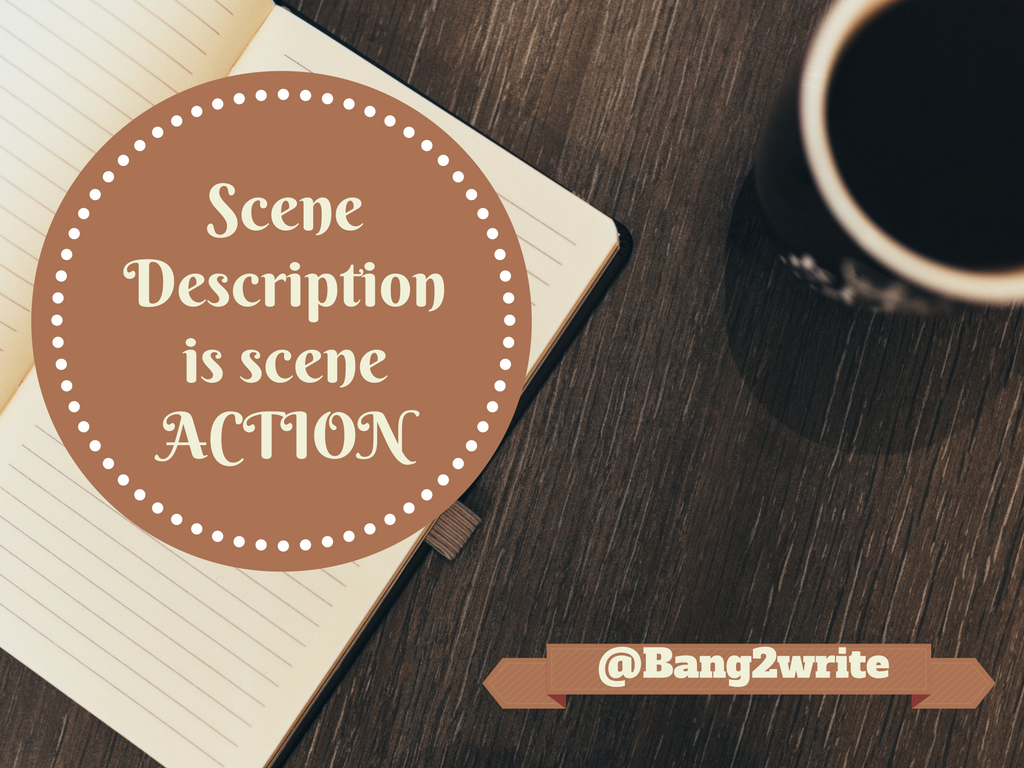 So. You’re a novelist and want to expand your skill set to include screenwriting. Very cool.

Should be just a matter of shifting your novel into some screenwriting software, make a couple tweaks and you’re golden, yes? Well, not so much.

About four years ago, I decided that I wanted to add screenwriting to the tools in my arsenal. Knowing nothing about the craft, I did just what I suggested in the paragraph above and thought it would fly.

The problem wasn’t so much the dialogue because that works pretty much the same in either discipline. The issue was narrative vs. action. In short I just wasn’t VISUAL enough!

Movies and TV are both visual arts. You watch them. Books are thinking arts. The ideas you create for a reader fill their imaginations with pictures and they color it in.
And that’s the big difference in this “us vs. them” mentality: As a novelist, the reader creates the visual picture. As a screenwriter, you do.

I don’t know about you but I learn best with some examples. And, yes, these are mine all mine so you can see how I shifted from writing narrative action to visual action.

Argh! This was and still is one of the hardest transitions I’ve had to do. But here’s the best part: once you recognise how to change your gorgeous but flabby action into svelte, visual lines you can do whatever you want in your first draft.

Here’s an example from my screenplay “Uneven Advantage” which is based on my first novel of the same name:

It’s a dark November night on the Delaware River. Center City Philadelphia is on one side; Camden, NJ on the other. We fly over the Commodore Barry Bridge, then the Woodrow Wilson Bridge. The lights from Philly and Camden are reflected in the water.

The camera focuses on a Port Authority Transit Company [PATCO] train climbing out of the tunnel on the Philadelphia side and flies right into one of the windows. The camera rocks in cadence with the train full of evening commuters as it climbs toward the apex of the Benjamin Franklin Bridge. An OS shot focuses first on a crossword puzzle, then someone on a phone, and finally on a large chronograph watch — aqua and silver — and pulls away.

That scene description is waaaay too long and it’s FILLED with camera direction. Yes, it’s tempting to describe exactly what you see in your head but then who needs a director?

This change shouldn’t cause a script reader to pitch it in the trash:

A train rockets out of a tunnel up onto a bridge crossing a dark river. The faces of RIDERS, reflected in the windows, disappear as the train enters another tunnel.

Same feel as the long scene but it’s immediately visual using action words without making the page look black with too many words.

Stay Out of Your Character’s Head!

One of the hardest parts for me about seguing from novelist to screenwriter is learning to stay out of my character’s head. What s/he is thinking is none of my damn business when I’m screenwriting. That belongs to the actors and the director. Here’s an example that doesn’t belong in a script:

Hall loves her privacy and doesn’t feel like gabbing with Judy right now. But then guilt kicks in as she turns to look at a picture of her father. She can barely stand thinking about him even this many years after his death but she knows … just KNOWS, you know? … how pissed he would be if she blew off a call from her mother. He would tell her not to disrespect his wife.

Mmm, nice fit for a book but this can be streamlined for a screenplay into this:

The phone rings. Jocelyn glances at her …

… and squints at the word ‘Mom’ above a picture.

Jocelyn’s finger hovers over the decline button but she pushes accept instead.

Still gives you an idea of the relationship with her mother without going into legions of overblown and overwritten description.

It’s going to take some practice to spot how to tighten your action when writing a screenplay but once you do … and can do it with ease … you can write anything in the first draft and clean it up like a pro.

Here’s Some More Links On Visuals For Your Screenplay

10 Ways To Conquer Your Scene Description

How To Write Openers That Grab The Reader

BIO: Victoria Rosendahl is a published novelist, a screenwriter who has worked on assignment and has been an advertising copywriter for over a decade. To contact her about writing or editing, CONNECT ON LINKEDIN.