So, carrying on with my Top 5 Mistakes series, I thought I’d return to what many of you come to B2W – female characterisation! But let’s flip it for a change – rather than, say, 5 Ways To Write A Strong Female Character, let’s look at how NOT to write her … Enjoy! 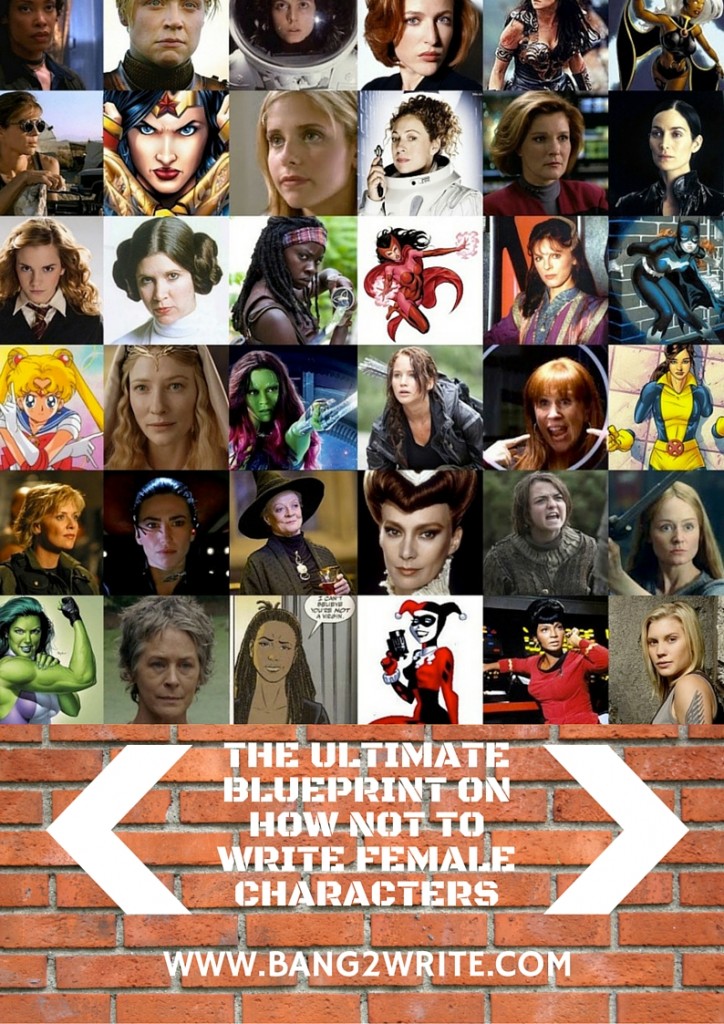 1) Define her by the men in her life

Repeat after me: women have their own lives, thoughts and problems … And very often, we’ll see male characters defined as such in spec screenplays, yet female characters? Forget it. They’ll end up as sounding boards, facilitating male emotion. Le YAWN.

2) Make her fly solo just for the sake of it

Yeah, don’t give her a husband or a boyfriend cos this totally weakens her … WHOA! Stop right there. Oh look, we’re at the other end of the scale … Funny, that.

Look, We hear lots about the apparently “sexist” wife and girlfriend character role function. But those commentators who claim being a WAG is automatically sexist are forgetting a helluva lot of women in real life are undertaking these very roles, right bloody now, including moi. BACDEFUCUP!

So no, the character role function of WAG is not sexist … The fact there are so few roles that AREN’T this role function, however? BINGO. Now we’re talking. But that’s an entirely different kettle of fish. Conflating the two is not productive.

So, in the meantime, if your character is a wife, or a girlfriend? It’s not necessarily time for you to sit on the naughty step (unless of course you’ve written her as number 1 on this list, of course). MORE: Stop Saying “Diversity”. Start Writing VARIETY!

Look, we’re not reinventing the wheel, here. Just like any other character, your female ones need to have a REASON to be in the story. They need motivations of their own, but more importantly, they need a ROLE FUNCTION. Sticking them in the story – especially on the end of the phone, yuk! – to appease imagined femcrit bloggers and advance audiences on Twitter will NOT work, trust me.

Oh and while we’re on the subject, let’s just retire the rape/revenge motivation and the whole traumatic past / dead relatives / Daddy issues back story, yeah? MORE: Top 5 Ways Writers Screw Up Their Characters

In other words: if that’s the ONLY thing your character does? THAT’S WHEN she ends up feeling two dimensional again. DOH!

So, because she IS kick ass, even IN her underwear?? Doesn’t mean she has to be a crappy character either. Remember, Ripley spent the denouement of ALIEN in her scanties, so what! Again, there’s no need to be either/or, dudes! MORE: 5 Modern Kickass Hotties Who Are Also Great Characters

Hey, don’t you know that women have to have good intentions on screen, otherwise it’s MISOGYNY?? If you write female antagonists or secondary female characters with less than stellar motivations, you hate women (obvs). Yay equality … Erm no. JUST NO, PEOPLE! MORE: 33 Experts Share What They Want Next From Female Characters 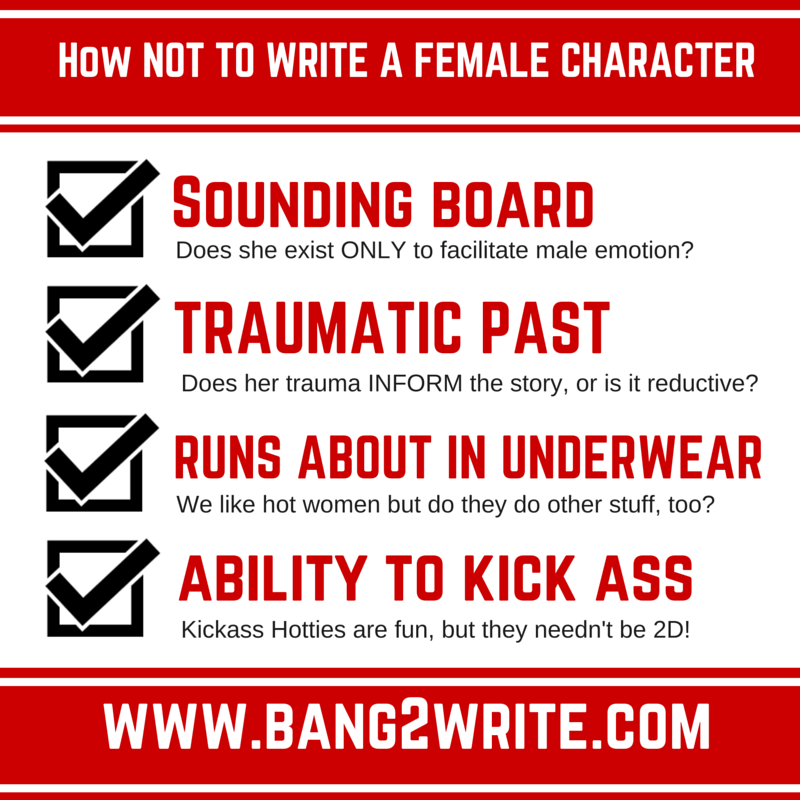 Want MORE on how NOT to write female characters? 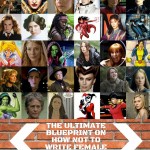 Then join the scriptchat by following me on Twitter as @Bang2write, plus you can also join 1000+ writers at varying stages of their careers (new to professional) at the B2W Facebook group, Bang2writers.

Plus you can sign up for B2W email updates HERE (or on any of the pix in this post) and get a FREE 28 page ebook (PDF), The B2W Ultimate Blueprint On How Not To Write Female Characters.  Enjoy!

previous55 Quotes For Writers To Live By
nextBUY THE FORGOTTEN WOMEN SERIES, NOW!