How Do I Pick A Writer’s Pseudonym? 6 Top Tips 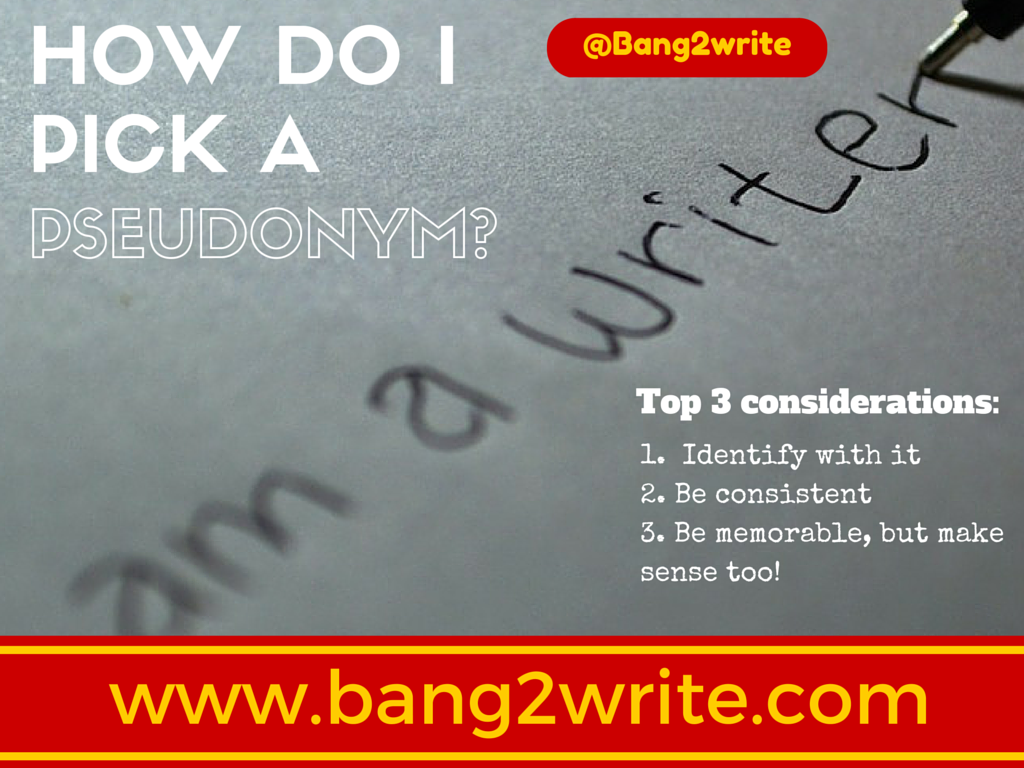 Many thanks to Bang2writer Amber Isleib, who asks this question via the B2W contact form:

Do you have any advice on picking a pseudonym? I’m sure I can’t be the only one struggling with this. It seems I either come up with something that sounds nice but is boring, or sounds weird but appeals to me for some dorky reason, but nothing fits what I want my professional persona to be. Help!!!

There’s no rules to this. You can pick whatever you want, you’re the one using it. Just because you’re female doesn’t mean you “have” to use a female pen name (or vice versa).

Equally, if initials feel like a “better” fit, than go with that. There should be no pressure or expectation here and though this *can* happen, don’t let it sway you. It’s your pseudonym, you don’t *need* to justify it.

Sometimes, BAME authors and screenwriters feel they would be taken more “seriously” if they have “non-ethnic sounding” names (please note these are not my words, but based on various conversations with my Bang2writers).

This is a tough one. It’s true we live in a heirarchal society, so if female names can get marginalised, then it’s pretty obvious “ethnic sounding” names may be too. Some say we should go with the ones more likely to get through the (virtual) door; others say we should push on regardless, since change can’t happen otherwise.

MY TAKE: I still think it’s about whatever works for you, personally. You’re the one battling the submissions pile.

We all know standing out can be key in the pile, so a memorable name can be worth its weight in gold. If your surname (in particular) is something in common with literally thousands, or even hundreds of thousands of other people, then it’s possible your name might fade into the background. It’s no accident that writers with last names like Smith or Jones are frequently told to come up with a good pen name, after all!

Diablo Cody is the first screenwriting pseudonym that comes to mind here. The pen name of Oscar winning writer Brooke Busey-Maurio, she apparently chose it because it was “cool and intimidating” and it certainly is that. However, Busey-Maurio feels she chose it too early in her career, establishing the name online before she established her career. She has written since this was a mistake.

There are other times a memorable name can be something of a curse, too. For example, I can think of only one “Palahniuk” I have ever heard of and that’s of course, American novelist Chuck Palahniuk. Yet I have to look his name up every single time I write it to check it’s correct (and I’m a good speller!). I dread to think just how many entries online are spelled wrong and therefore not contributing to Palahniuk’s search results!

MY TAKE: If you’re going to pick a pen name, pick one that *fits* with your remit. Cody’s pen name worked far better online when she was a blogger, than as an award-winning screenwriter.

“Diablo Cody” is not my favourite pen name by a long shot, but it does exactly what it’s supposed to do: “Diablo” means “devil” and “Cody” is presumably a reference to Buffalo Bill Cody. In other words, it’s “cool and intimidating” like Busey-Maurio says she wanted, (presumably) because it’s not only hyper-masculine sounding, but UBER-AMERICAN. And why not?

However, I see pen names all the time that don’t make a lick of sense. Instead, they end up sounding like completely mad Klingon names, that are waaaaaaay too long and full of too many consonants. This reeks of desperation in the spec pile: “Notice meeeeeeee!”

MY TAKE: If you’re picking a pen name, shorter is nearly always better – and try and stay away from Sci-Fi-sounding names. 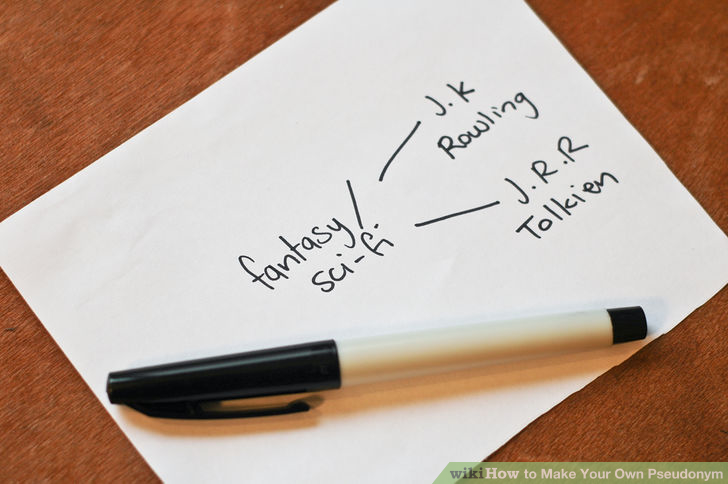 Other important things to remember:

4) Be consistent on submissions!

I can’t tell you how often this happens in the spec pile on email addresses, CVs/resumés, cover letters and even TITLE PAGES in script calls and contests:

This does my head in royally. This means I will get sent stuff from Mike Smith, note down his pseudonym and then later I have to remember he’s not two people, but one.

This might not seem like a big deal, but consider the size of the pile – and the fact there is bound to be more than ONE person doing this. As a result, I have wasted whole afternoons looking for people’s work who literally do not exist. Grrrr!

The solution is simple and you need never incur the wrath of screenplay admin types ever again: SUBMIT AS YOUR PEN NAME ONLY! This includes: CV/resumé; cover letter and title pages. And YES, get an email address as your pen name!!! Email addresses are free, there’s no excuse.

With reference to the above, if you’re going to tweet, blog or use any other platform as a writer (including Facebook), DO NOT USE BOTH your names. Most people will simply assume you are two different people. People online are busy and skimming content, they will not necessarily notice you’re the same guy/gal.

What’s more, you need to be OVERT over what multiple accounts are FOR. Just recently, I launched @LucyVHayAuthor to showcase my own writing, with @Bang2write being for writing tips and general rants. Both were named “Lucy Hay” and both had my picture. Guess what happened?!?! Yup … I got A BUNCH OF EMAILS from different people to Bang2write saying:

So I ended up changing the B2W Twitter to “Shouty Writing Tips”. Suddenly the emails stopped and people began to notice I was both. Yes, the online world is that weird. FML.

It’s worth remembering that a pen name may not be desirable or useful to you. Being the internet, you may benefit from BRANDING instead. “Lucy V Hay” might be my real name, but you may know me as Bang2write, first. I’m the only one online so easier to find as this brand name (Lucy Hay is The Countess of Carlisle and a historical figure, so I’ll never win a Google fight against her!).

However, if you are going to BRAND yourself, rather than use a pen name, AGAIN – consistency is key. You need to tell your story online as this brand, plus in the very least you should utilise social media effectively via that brand name. This is a lot of effort.

It’s also worth remembering than branding is MORE than just picking a generic name or term. Simply picking words like “scriptwriter” or “film director” is NOT branding. A brand is about DISTINGUISHING yourself from competitors and creating a lasting impression in the minds of potential clients/users.

For example, when you think “Bang2write” – regardless of whether you’ve used my script consultancy – you most likely think:

This is what people come to me for, predominantly too — and this is no accident. I DESIGNED and BRANDED Bang2write this way. And it takes a helluva lot of effort!

If you want to pick a pseudonym, make sure it’s something you identify with and can imagine taking through the various stages of your career. Also, once you’ve committed to that pseudonym, be consistent with it in both submissions and social media use. Lastly, don’t let what others think affect you, but if you can’t think of one suitable, perhaps branding yourself might be more effective.

2 thoughts on “How Do I Pick A Writer’s Pseudonym? 6 Top Tips”