A Look In The Spec Pile: @Create50, THE IMPACT

Following on from Wednesday’s brilliant post by @ShoreScripts on spec screenwriting clichés, here’s a look inside in the Create50 “lock-in” for LondonSWF’s second crowd-sourced feature film, THE IMPACT.

Basically, Team LSF – and some very knowledgeable guests – locked themselves inside Ealing Studios during bank holiday weekend. Over the course of the two days, we re-read and deliberated over the finalists in extreme detail.

From there, we created The Impact’s storyworld and built a preliminary story arc of 50 final screenplays, so filmmakers can make their choices in phase 2 of the project.

An announcement re: the final 50 will be coming *soon* … Bear with us as we tie up various loose ends, potential and literal. In the meantime, you can check out the highlights of B2W’s weekend in the lock-in below, or read the full post, HERE on the Create50 website. 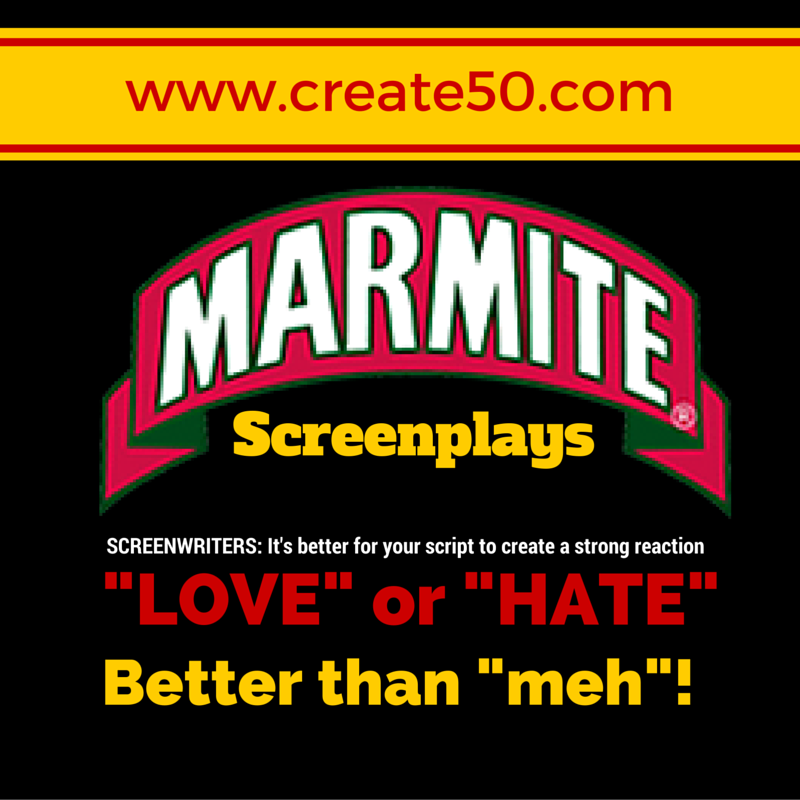 “Would people REALLY do [THIS] at the end of the world?” was a question that came up again and again throughout the lock in. “Relatable” is a very mod-ERN word, but generally speaking, this is what readers mean when they say “emotional truth”. This meant some otherwise excellent scripts fell by the wayside simply because not enough of the readers *related* to the actions of the characters in the story. C’est la vie!

Want to know more about “emotional truth”? Check out my book, WRITING & SELLING DRAMA SCREENPLAYS, or click the Marmite pic above.

As Chris has mentioned on social media, Create50 scripts were read and rated by SIXTEEN different people from start to finish in the judging process. This is extraordinary for *any* scheme or initiative, so writers can be assured of getting readers’ due diligence on their work.

However, being a creative process (again inevitably!), some scripts fell somewhere in the middle, with readers either LOVING or HATING them. We called these the “Marmite” scripts.

Marmite scripts were particularly difficult to rate and decide on, with many ending up in the MAYBE pile, to be debated again later. At least two Marmite scripts were debated on at least three occasions throughout the weekend! MORE: 3 Ways To “Reader Proof” Your Screenplay

This was probably the one issue we returned OVER and OVER again over the course of the weekend. As I’ve written before, there were more “Zeitgeist” scripts (same story, by different writers) in THE IMPACT call than ANY I’ve ever worked on. Unsurprisingly then, we also had several instances of multiple entries by individual writers scoring very highly!

As a result, we had many questions for the material, both at individual script level and for the overarching story of THE IMPACT, but basically boiled down to these two questions:

Again, proof that if Story is King (or Queen!!), concept IS the key if you want to catapault your work out of the spec pile. MORE: Check out B2W’s official feedback from reading Round 1  of The Impact Scripts

CLICK HERE to check out B2W’s Create50 lock-in feedback in even more detail.

CLICK HERE to check out guest judge and filmmaker Phil Peel’s feedback on the lock-in process.