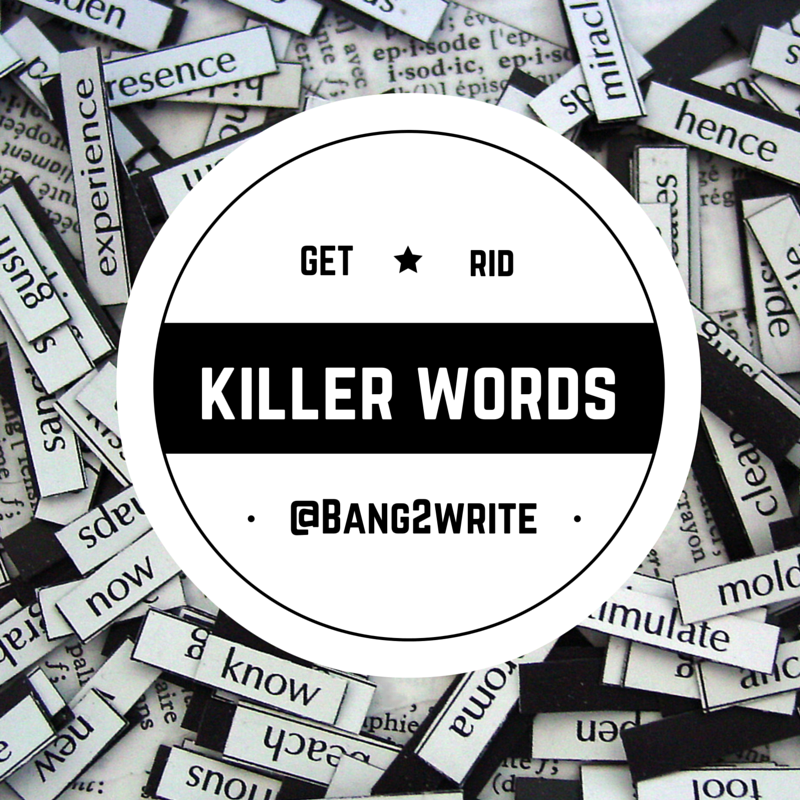 When you’re reading all day, every day, for work AND for pleasure you tend to notice how *certain things* slip by (maybe?) unchallenged, even into produced and published works.

This is a huge screenwriting no-no in scene description, but I see it pretty much every day, usually describing something we’re supposed to be seeing on screen that pertains to the plot in some way. I’ve noticed too this has started to slip into books as well, both unpublished and published, indie and traditional. Yet it’s a horrible, redundant word. It’s simply not needed. Get rid, STAT.

Whether it’s BLOOD or COFFEE, authors in particular have started to call it “liquid” – seriously? Just say what it bloody is, people. C’MON! Also, please for the love of PETE authors, stop obsessing on coffee in general. Same goes for screenwriters, endlessly having their characters “cradling” and “nursing” drinks. STOP IT.

In screenwriting, what you SEE is what you GET, so characters “feeling” anything is pretty redundant. Novel characters don’t fare much better, because it frequently ends up passive. AVOID.

I don’t know if this has *always* happened, but just recently I’ve noted writers – both screenwriters AND novelists – calling TEARS “saline”. I’ve literally read 4-5 published books and a stack of screenplays in the last couple of months doing this. WTAF? Now, I like a good synonym as much as the next wo/man but seriously, there is such a thing as going too far. But don’t take MY word for it, remember veteran author’s Stephen King’s advice here: Don’t describe AROUND the subject, just say what the thing is.

Just like number 3 on this list, “wonder” opens up a whole world of pain, not just for screenwriters but novelists too, as Fight Club’s Chuck Palahniuk points out when he says we all need to get rid of thought verbs. As Palahnouk right says, words like “wonder” (and its countless synonyms) become short cuts.

A variation of number 1 on this list. Go to the naughty step!

OH LOOK! This one is *so* ubiquitous, it’s even in the the actual bloody definition OMFG:

STOP IT WITH THE SCALDING LIQUID, PEOPLE!!

I’m gonna go out on a limb here. NO ONE in the real world takes sips of scalding tea or coffee on a regular basis. I would venture most actual adults KNOW when beverages are too hot to drink.

(Oh, by the way, combine “scalding” with “liquid” for maximum RAAAAAAGE points from me! You have been warned … OH and if you want to use “scalding” to do with “scalding words” — WHY NOT. PLEASE DO. JUST DON’T TALK ABOUT SCALDING LIQUIDS OMG! Ok I’m done).

An obvious one here, screenwriters and novelists. “Looking” is not a *real* action. And yes, same goes for all its synonyms, from “regard” to “glance” to “gaze” to whatevs, yawn yawn yawn.

So leave this one alone, so when you really DO need it, ie:

It has actual IMPACT, then. Seriously, have a look through your work. How many synonyms of “look” can you find? Do you need ALL of them?

Too many screenplays – and novels, now you mention it – have what I call “false movement” in. In other words, the writer is so worried about “placing” the characters IN the scene, s/he ends up STAGE MANAGING them, rather than telling a story. Don’t let your scenes become static.

Okay, actual fucking IS a real action – and if you’ve got this in your screenplay or novel, you’ll get a thumbs up from B2W. No, what I mean here is “fucking” as an ADJECTIVE  to describe *whatever*, especially in speech. It’s hopelessly overused, especially in screenplays but novels too, particularly unpublished ones.

So as hypocritical as it sounds FROM ME, just drop the swearing, okay??? PS. Screw you. MORE: F*ck Off, You C*nts: All About Swearing.

Cliche-o-rama phrases like these below DO NOT go down well (chortle) … In prose, dialogue OR in loglines my friends:

[To a police character]: “I’ll have your badge!”

“[Character] has to learn to love and live again”

“I’ve got a bad feeling about this …”

“[This story situation is] just the tip of the iceberg”

Want more? Then check out this awesome and alphabetised mammoth list of 681 Cliches To Avoid In Your Creative Writing.

You’re not **off the hook** yet (arf), writers! Here’s one more that turns up endlessly in both spec works and published books I read (I may even have written it myself!). But what is it??? Here you go:

AKA “The Evil Sentence”: if you want to see a STACK of published books that include this phrase, CLICK HERE.

AT THE END OF THE DAY, no writer is perfect, I get that – not even me! We all have to BATTLE OUR DEMONS and what I outline here is JUST THE TIP OF THE ICEBERG!! 😛

What is key, however is having the knowledge, wherewithal and WEAPONS to get rid of these pesky beasts. So get going!

Share this:
previousHow To Beat The Gatekeepers
next20 Experts Share Their Thoughts On Talent Vs. Hard Work