All About Low Budget Filmmaking

If you’re into low budget filmmaking, this one is for you! We’re big on filmMAKING as well as *just* screenwriting here at B2W. Make sure you check out these very real ways of ensuring your script actually gets MADE … (instead of languishing on your desktop forever)!

This blog post is courtesy of Samantha Horley, who’s also written 6 Ways To Make Your Screenplay More Likely To Get Made on this site. Ready? Let’s go … 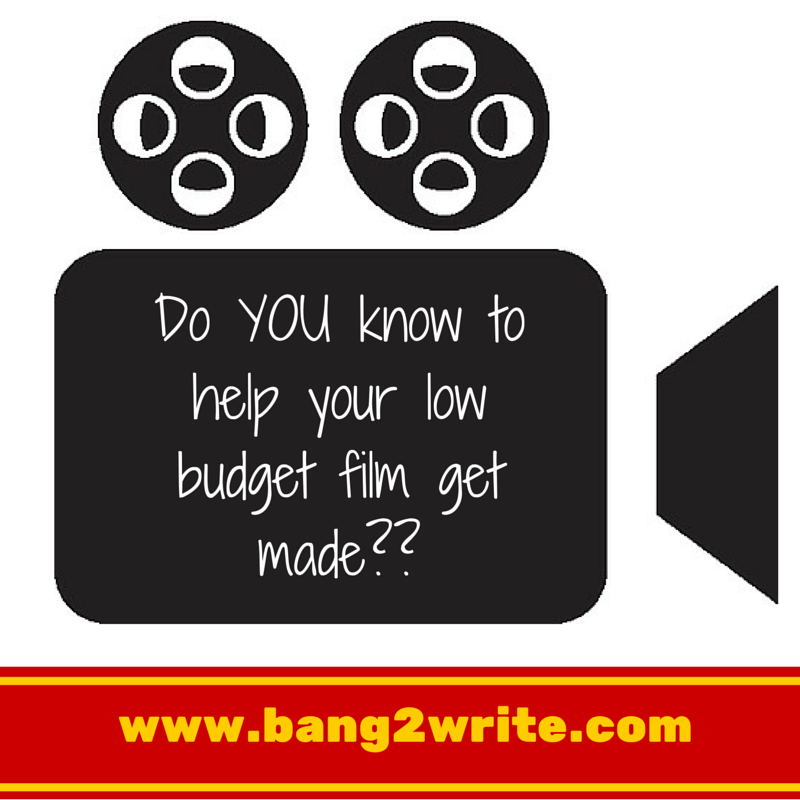 Lots of books, online tutorials and magazines offer hints about low budget film-making. Most seem to relate to ways you can cut costs, corners, improvise and save money.

But saving money doesn’t make your film better, it just makes it cheaper. Wouldn’t it be good if there were some just tips about how to make your low budget feature better?

He has spent the past four years helping to conceive, develop and executive produce low-budget films including

All of these secured domestic and US theatrical releases on budgets of less than £350,000. They were also helmed by first time feature directors, writers and producers.

In other words, Stephen Cleary KNOWS what he’s talking about when it comes to low budget, award winning film!

1) Rethink what screenwriting IS

When time is limited you don’t develop, write, revise and polish a script 4 times, it takes too long. So how many drafts of the script should you plan for?

Between 0 and 1. If you treat screenwriting for low budget the same you would for a normal film, you’re sunk. You still write, but not on paper so much. With the camera, with the actors, with short documents, in post-production.

The inspiration for your story starts out there, not in your head. Low budget storytelling is the art of making the mundane compulsive. You start the story with what you’ve got, with those things in your life you can use at no cost. Most of those things are commonplace, dull and non-cinematic. All you have to turn them into career-enhancing gold is your imagination, but luckily that’s free too. But don’t imagine what you’d like: transform what you have.

Call it gimmick, shtick, or USP, call it whatever you want, but if your film doesn’t have a distinction, something to make it stand out from the herd, then chances are, no matter how good your film is, it will be lost in the background noise created by the thousands of other low-budget films produced each year. In the low budget world, genuine distinction is at least as desirable as real quality. And if you could only choose one, you’d choose distinction. Quality means NOTHING if nobody notices it.

4)  Be Realistic With Time

Your relationship with your film is a brief, passionate affair, not a marriage. You make a successful low budget film for a variety of reasons …

You will most likely lose money though you may hit pay dirt, you will definitely be underpaid while you make it. You and your career just can’t afford to not be earning enough for years on end, because it will exhaust and depress you. So limit your commitment to a short time, but during that time give it everything. A low budget film made over 3 years is not a low budget film, because the time you invest has a price on it too.

Embrace your biggest problems because they are in fact your most exciting solutions. Look at what looks like the biggest problem in making your film. It’s only a problem because you want to tell the story without it. A terrible actor, a location that you can’t record sound in, a shooting period cut in half when funding plummets. Make these issues central to how you conceive the story and shoot the film and you’ll have a startlingly original piece of work.

Go to stuff, introduce yourself, take part. Everyone you meet is a potential collaborator, be they someone to become part of your team, support, sounding board, a person who owns a van/location/equipment /pink poodle to add to your list of resources. You haven’t written a list of resources? Write one, you may be surprised at how many you have.

Well I have been around the conceiving and making of lower budget films more than most people. I know, through practice and experience, that these are all critically important.

Check out 6 Ways To Make Your Screenplay More Likely To Get Made by Samantha Horley.

previousInfographic: Surefire Writing Strategies For Those Who Think They Can’t Write
next20 Female Experts On Writing