How To Avoid A “B.O.S.H” Screenplay 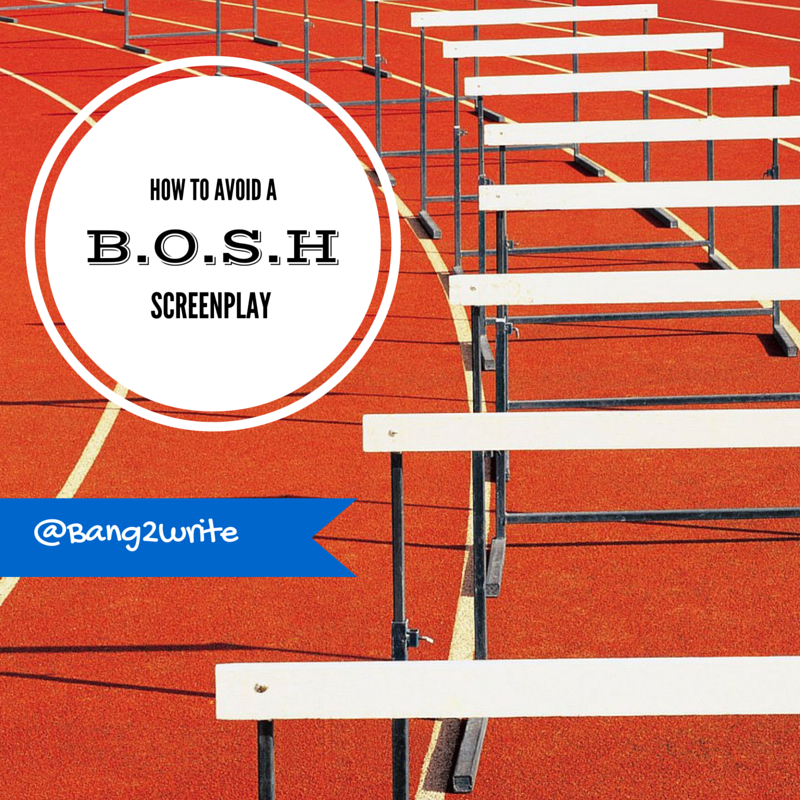 QUESTION: What is a B.O.S.H screenplay?

It’s not that it’s a BAD screenplay either, it’s just that the structure could be leaner and the events that happen need to build up more “obviously” – the scenes don’t feel “linked” enough to contibute to the narrative as a whole.

Sometimes, screenplays go B.O.S.H randomly, usually somewhere in the middle but occasionally “upfront” (ie. I’m “waiting for the story to start” or at the end, as if the writer has suddenly gone “Eeek! I need to wrap this baby up!” and then writes any old thing to push through the resolution of the story.

ANSWER: So put simply, B.O.S.H stands for “bunch of shit happens” (or “stuff”, for my less profane Bang2writers!).

We all know that structure is paramount to screenwriting. Whatever structural method you use (and seriously, no one cares which), it needs to work, plain and simple. But *how*?

Good structure is about OBSTACLES. In other words, your protagonist needs something, so stuff gets in his/her way (including the antagonist). They’ve got to climb over these obstacles to get what they need.

However, we also know the resolution, conclusion, Act 3 (or whatever) must have the HIGHEST PEAK of the story – this will be where you PAY OFF everything you’ve SET UP.

All the obstacles the same size? NOT DRAMATIC

Runners have to jump over hurdles, right? But usually, those hurdles are the same size. This is because what is being MEASURED is *not* the runners’ ability to get over those individual hurdles, but the time spent doing it.

It’s the exact opposite with screenplays.

It’s as simple as this: stories that don’t go anywhere are boring. In fact, they’re barely stories. We’re simply being asked to look at *something* or *someone*. This can work for a matter of seconds, sure – but for sixty or ninety minutes? Definitely not. Hell, looking at something where nothing happens gets boring within about a minute! Yes, that fast.

Check out this bunny:

Why are animated gifs like this so popular on the web? It’s very simple. It’s usually one (or both) of these things:

The gif posted here clearly does both of these things: cute bunny? Check. Cute bunny masters the stairs and gets a treat at the top! AWWWWWW. Double check. We’re impressed such a tiny animal can get up so many obstacles in its path, so we’re pleased it is rewarded .

LESSON 1: Gifs are just seconds long, so simply looking at cuteness works. 90 minutes of a bunny sitting there in  front of us would be DULL.

LESSON 2: The most popular gifs tell a STORY.

So what’s the conclusion, here in relation to our screenplays? This:

i) Protagonists need an aim (ie. like the rabbit getting a treat)

Obstacles in your protagonist’s path should get STEADILY BIGGER

A note on TIME

Unlike gifs however, we don’t want our protagonist to get what s/he needs in the fastest time possible.

A novel, movie, TV show, even a webisode will have a set amount of time in which s/he has to perform the task. So instead, the protagonist must go through more and more difficult obstacles as the alloted time progresses.


Drama comes from conflict, so you have to make every obstacle in your protagonist’s way steadily bigger (ie. more difficult). So rather than hurdles, think of your protagonist having to “climb walls, each bigger than the last”.

So the key is remembering that all the obstacles up against your protagonist can’t be the SAME SIZE.

If you want to avoid your screenplay becoming entirely B.O.S.H (or you want to iron out a sequence of B.O.S.H events *somewhere* in your script!), then you need to ask yourself about the ORDER of the “walls” in your protagonist’s way. Sometimes we accidentally put scenes in the “wrong” place and all it takes is a re-order … and suddenly it’s much more dramatic. Try it!

Share this:
previous10 Female Characters Who Stirred Up The World
next3 Questions Your Writing MUST Answer