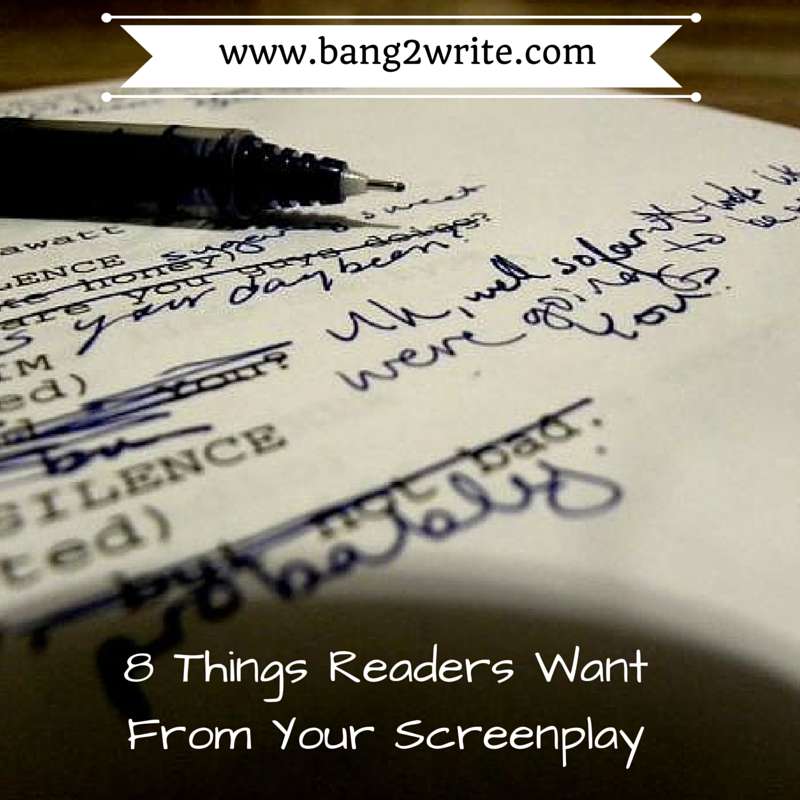 Script readers often get a raw deal. Writers frequently assume script readers don’t really care about the scripts they read … but in my experience this is NOT true.

Fact is, script readers WANT every script they open to be AWESOME. When I find a script that truly impresses me, I am always overjoyed. My script reading colleagues are the same, too. Honest guv!

But what does ‘awesome’ mean? Well obviously that’s a ‘piece of string’-type question, but I’ve managed to boil it down to 8 craft-related elements I want from a great script. Ready? Let’s go …

Without a great concept, you have NOTHING. A great concept is the very foundation of any successful story. If you’ve written a screenplay and can’t really work out what it’s about, at grass roots level? No one else will, either! This is why it’s a great idea to road test and bomb proof your concepts FIRST. So what are you waiting for?

Look, we all *know* screenwriting is a visual medium … So why are so few specs in the pile actually visual?? It’s because spec writers are not investing in their scene description. As a result, the prose in their screenplays ends up turgid and prescriptive. Nooooooooo!

You MUST ensure your writing is as visual as possible to gain the reader’s real consideration. Scene description is, in real terms, the MOST IMPORTANT (yet underestimated) part of the process. This means that if you can get to grips with it? You immediately catapult your work to the TOP of the pile!

Most screenplays do not start well. In fact, they barely start at all – someone just strolls in and starts talking. YAWN!

Remember, screenwriting is a VISUAL MEDIUM, so we need a great OPENING IMAGE to start this story off, okay? Try and match that great opening image with your story, genre and tone. So, if it’s a comedy, think of something funny. If it’s a Horror, think of something scary or sinister. A thriller, something exciting. But DO beware of those clichés in the first instance, too – readers rarely forgive them in the first ten pages.

Yes, yes, we know: Beginning – middle – end. Set up and pay off, it’s very simple … But if it were easy, everyone would be able to do it! And fact is, everyone can’t do it.

This means that if you want to put yourself and your writing HEAD AND SHOULDERS above most of the pile, you gotta really get to grips with structure. It doesn’t matter how you do it … No reader cares whether you use Save The Cat, The 3 Acts, The 5 Acts, The Mini Movie Method – **whatever**! Just make sure you nail structure.

Most scenes in spec screenplays are boring. They’re usually centered around talk, so there’s no sense of movement, so the scene feels “static”.

Or the scene description is crammed with “fillers” and what I call “false movement” – moving eyebrows; hands on hips; walking towards windows, for no real story reason. Guess what? Creates the same problem as the overly talky scene – it feels STATIC again!

What’s more, the average scene in the spec screenplay is simply FAR TOO LONG. Think as a rule of thumb: upto 1 page for “ordinary” scenes; upto 3 pages for “extraordinary” scenes. Boom! MORE: Are You Making Any Of These 20 Killer Errors In Your Screenplay’s Scenes?

6) Intriguing Dialogue (that doesn’t take over)

Great dialogue can be a real delight. What’s more, it is celebrated by actors and audience members alike, so it’s not difficult to see why the average spec screenwriter wants to be the next Sorkin, Whedon, Cody, Tarantino, Ephron or *whomever*.

But it’s important to remember dialogue is massively overrated. The average spec screenplay is quite literally bloated with it – writers could cut half of it, or even TWO THIRDS and it would do the same job.

So don’t indulge your desire for dialogue: instead, think about how your dialogue PUSHES THE STORY FORWARD EVERY SINGLE TIME IT APPEARS … Because if it doesn’t? It needs to go.

7) Good Characterisation (whatever that means)

We often hear about “good characters” from social media. There are loads of arguments (especially on Twitter) about who is the best or worst and why.

Don’t fall into this trap and start thinking like a layperson. You are a writer. A “good character” then means a character who has:

–  a discernible, believable and authentic motivation and/or arc (as appropriate)

Both of the above must fit the STORY. That’s it.

Yes, you may want to consider other factors – ie. diversity (and as any longterm Bang2writer knows, I’d encourage anyone to do so), but ultimately good writing is about “a good story, well told”, NOT politics. Forget this at your peril.

It comes down to this. We’ve got enough vanilla screenplays. We want to be certain only YOU can tell this story. So what are you waiting for?