3 Questions Your Writing MUST Answer 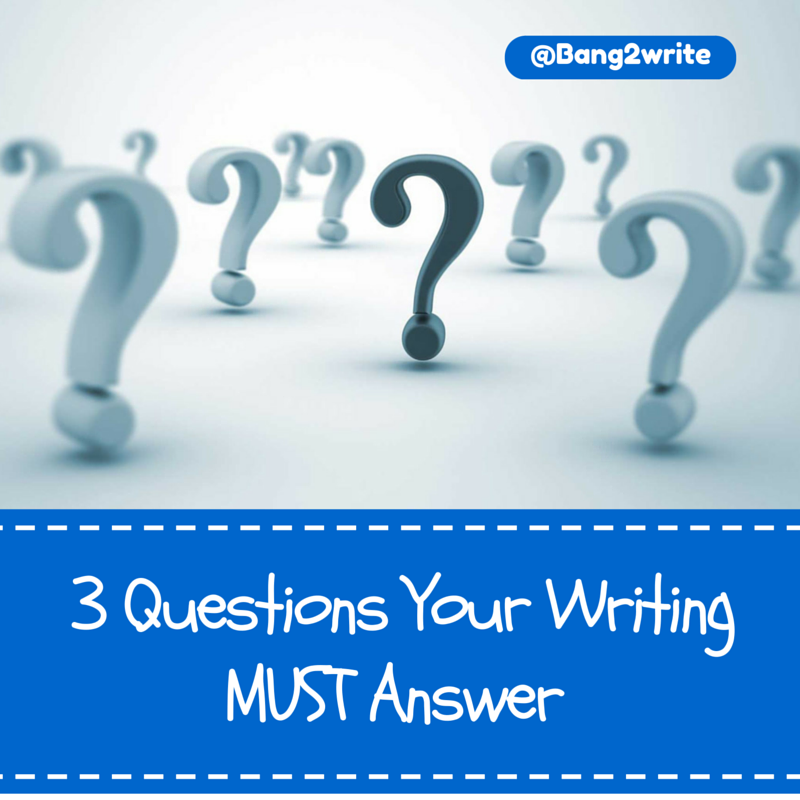 Bang2writers sometimes write to me, asking if I can tell them whether it’s “worth” them continuing with a project, or even writing altogether. But my answer is always the same: if YOU feel it’s “worth” it? THEN IT IS. If you don’t, then it’s not! Simple, really.

But often, those writers don’t really mean the above. What they mean is, “How can I TELL if my project or my writing *could* get any traction with agents, publishers, producers [and so on]?”

Well, it’s good news. You totally CAN tell “upfront” if your writing is “worth” pursuing and all it takes is answering three (not so) little questions … Here they are:

NEWSFLASH: Pitching is about concept. This means your concept has to GRAB someone. It’s the only way, because whomever you’re pitching it to – whether via a cover letter or query email; or at a dedicated pitchfest; or in a meeting, etc – has not read your screenplay or novel yet.

So, you have to have a GREAT idea and pull them in with it, to stand your best chance of getting a script request or your work read. A great concept really IS the difference between the IN tray and “move to trash”! Le duh.

But lots of writers get very het up about concept. They’ll say “it’s the execution that counts” and that as long as writers use their “own authentic, unique voices”, it will all fall into place. If only!

And guess how alluring that is, to a prospective agent, publisher, producer or whatever? (HINT: not very).

2) Do you know your characters?

No, I don’t just mean your characters’ names and life histories. I’m talking about WHO they are; WHAT they’re doing in the story; plus WHY … If you don’t know this, then maybe they shouldn’t be in the story at all! YES, REALLY!!

i) Role Function vs. Motivation

It’s not difficult to see why writers tie themselves up in knots over characterisation. Most writers know WHO their characters are, but where many get confused is over character role function and motivation. So here it is, broken right down to base level:

a) Role function: what a character is DOING in a story, plus WHY

ib) Motivation: what a character WANTS in the story, plus WHY

ii) “Is *good* characterisation about change?”

Some writers get confused about whether their characters – particularly protagonists – *should* change? The answer? It depends. HERE’S WHY. 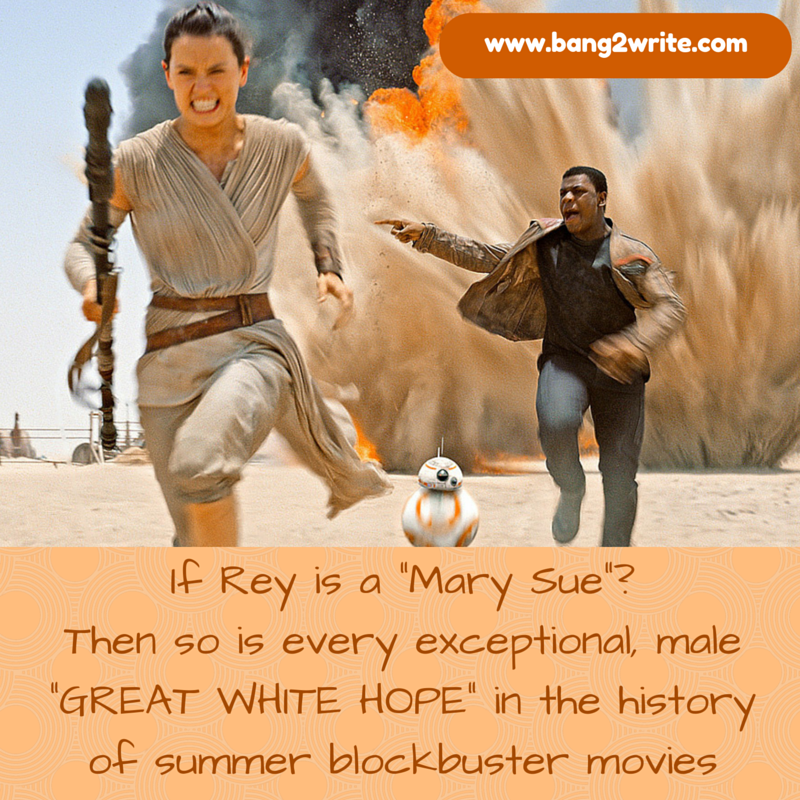 Is Rey From THE FORCE AWAKENS A Mary Sue? No of course not, but CLICK THE PIC for why it doesn’t even matter …

iii) Including The “Unusual”

Some writers want to write marginalised characters into their stories, particularly female ones. This means they may unwittingly waltz straight into the major pitfalls, such as writing tired stereotypes or even just “the usual”.

When you want to write a character that’s different to the norm, you HAVE to do your research. You have to work out WHY you’ve loved some and despised others. You have to see where things have changed and which remain the same.

iv) Contrast Can Be Key

One element of characterisation rarely considered by writers is contrast. Sometimes it can pay dividends to have two characters that perform the same or similar role functions, but in different ways. This can add to or underscore the the theme, message or moral of your story, though this is not the only benefit possible.

Characterisation is a complex thing …

But so is an audience’s understanding of your character. You also have to appreciate that however carefully you construct your character, things beyond your control (especially in a collaborative industry like filmmaking) may interfere with your vision.

What’s more, there will always be someone who hates your character. Why? You might have screwed it up, but more than likely your version just doesn’t fit that audience member’s vision of who that character “should” be. This is because everyone’s vision of what makes a “great” character is different. That’s just the way it is!

Look, there might be a gazillion blog posts and memes dedicated to various academic, social justice and fan theories, but when it comes down to it, it’s about entertainment, NOT theory.

If they’re any good, movies, TV series, novels, web series and social media channels will launch a gazillion “thinkpieces” and ideas. Some might praise the story in question; others might condemn it. Some will be in the middle. Whatever the case, people are talking about the story because it has entered their psyche in some way, for good OR ill. That’s the point of stories!

One thing that should be remembered however is your audience. You need to work out who your audience is for your story and target them accordingly BUT – and this is a huge but! – you should NEVER talk down to them. Audiences are not stupid. They are more media literate than ever before. Audiences nowadays simply will not tolerate clichés, obvious exposition or simply boring stuff that’s been done waaaaay too many times!

1 thought on “3 Questions Your Writing MUST Answer”

previousHow To Avoid A “B.O.S.H” Screenplay
next8 Things Script Readers Want From Your Screenplay