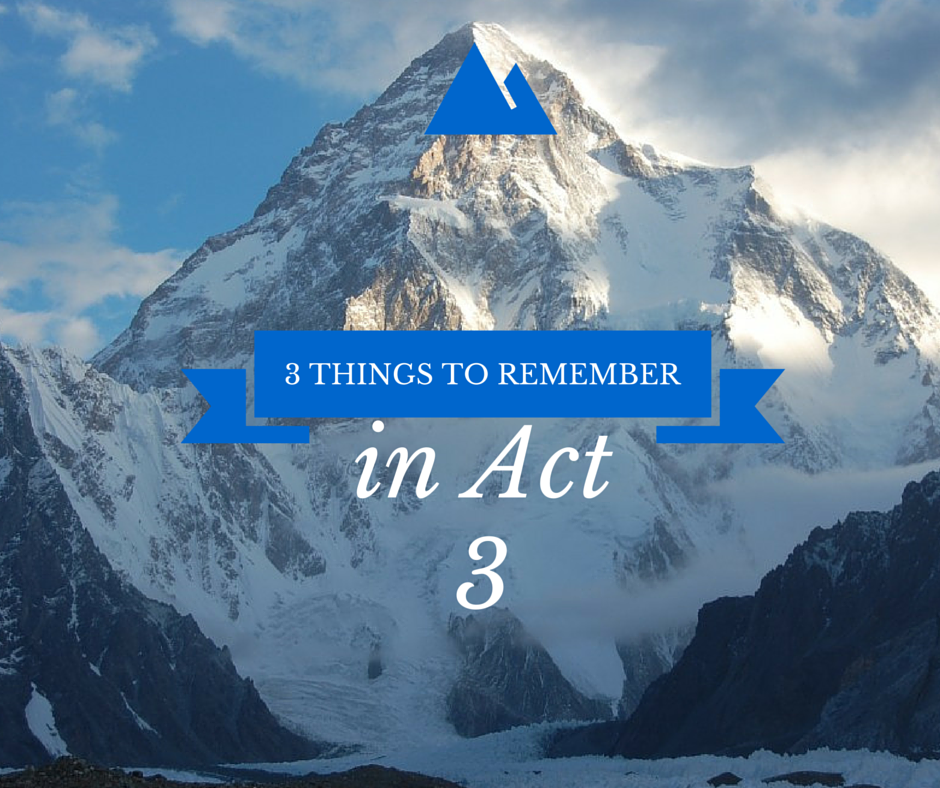 So today we’re talking about Act 3, courtesy of  Bang2writer Craig Howells, who left this question in the B2W Facebook group:

I’m really interested in the anatomy of Act 3. What are the Dos & Don’ts? I know you need to pay off, and I’ve got my own ideas (which I’m still working on) but I’d love to know your take on it.

I’m not a structure purist. As far as I’m concerned, all stories *just* need a beginning, middle and end (and not necessarily in that order, either!).

On this basis then, The Three Acts makes most sense to me personally, but if writers want to go for other methods it’s no skin off my nose.

As any Bang2writer knows, here’s how I see structure working in my head.

In addition, I would venture that three acts not only works for theatre and screenwriting generally (including short film), it works for novels too. I use The Three Acts in my own novels and I know plenty of other writers do, too. This is particularly advantageous when we consider how many novels are adapted for film, plus there’s a certain convergence between the mediums for readers as well.

So, as Craig requested, here’s my take on Act 3:

So, first up: the obvious, which Craig has already mentioned … Everyone knows the pay off needs to happen in the resolution (aka end) – but that can only happen if you’ve set up BEFORE that, otherwise your “pay off” becomes the dreaded Deus Ex Machina.

Some writers go the opposite way and try to pay off EVERY SINGLE LITTLE THING, too. But audiences and readers are media literate, they don’t need spoon feeding. Trust them to be able to follow without you needing to lead them by the nose.

Try not to “backend” all the exposition to the end of the piece, too. Whilst big reveals and twists in the tale are always great, keeping everything mysterious and shoving ALL the explanation towards the end can be a real own goal. Why? Because the audience or reader probably won’t get that far, for starters! They’ll give up early, because they’ll be too confused, for too long.

Alternatively, it could end up being what I call a “Scooby Doo” script as another character does an (unlikely) rundown of what’s been happening throughout and why: “And I’d have got away with it, if it hadn’t been for you pesky kids!”

DO – set up early and mete out necessary exposition THROUGHOUT the narrative, whether you’re writing a screenplay or novel.

DON’T – leave all the necessary backstory and info towards the end, or have something come out of the left field at the last minute.

As I mention in my book, Writing & Selling Thriller Screenplays, Thrillers have a very specific dramatic context, which I call “flight to fight”. In other words, the protagonist will spend the first half (or even two thirds) trying NOT to engage with the problem and/or antagonist (FLIGHT); only to about-face in the second half or final third and ENGAGE with them (FIGHT). 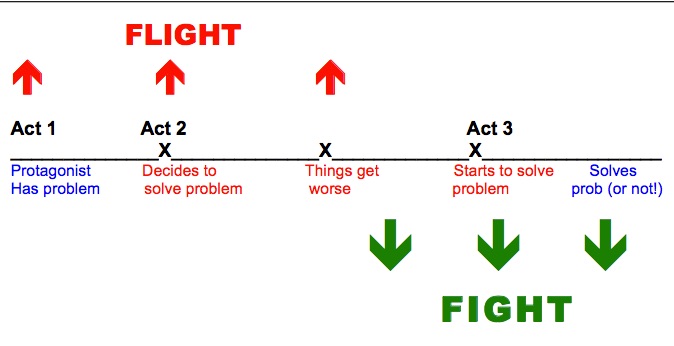 “Flight to Fight” is the dramatic context of Thriller, Horror and many other stories generally

Dramatic context is vital to chart the progression of a story: whilst characters themselves DON’T always have to change in the course of the story, if dramatic context doesn’t, then the story may seem dull or pedestrian.

Put simply: by Act 3, the dramatic context MUST change (if it hasn’t already).

Thrillers often share the flight/fight dramatic context with the Horror genre, hence scribes sometimes getting confused and/or even thinking there’s not much difference between the two (BUT THERE IS!!). However, it’s important to note writers could write this dramatic context into a drama screenplay, or a coming of age novel too.

By the same token, dramatic context in screenwriting and novel writing could be *anything* you like: characters move from “flight to fight” a lot (regardless of genre), but they may also move “wrongdoing to redemption”; “innocence to experience”; as well as “victim to victor”; “zero to hero” or anything else the writer chooses. In other words, all that matters is that SOMETHING changes at base level in the story, by that ending in Act 3.

DO: Think about dramatic context and how it changes by Act 3. Where did your story start, context-wise? Why has it changed? What is the audience or reader meant to take from this?

DON’T: Turn the story upside-down. Unexpected or twist endings do not come from parachuting in new stuff. You need for your audience or reader to be able to look back at the CLUES throughout the narrative and follow how that change in the dramatic context occurred.

If our stories are to have progression throughout and seem dramatically satisfying, then what happens LAST needs to be “bigger” than everything that proceeded it.

This may seem obvious, but many writers have “bigger” obstacles before the ending, which means the resolution then falls flat. This happens a lot with Act 1, when writers effectively “spunk their load” with the biggest set piece (or whatever) FIRST … So why bother reading all the way to the end?

Alternatively, if all the other obstacles before the end were of similar sizes, then shoving the (only) big happening at the end makes it feel as if the action goes from 0-60MPH. Again, it is not dramatically satisfying. (But remember point 1 in this list, we don’t want the ending to be SO big, everything’s “backended” either. Eeeesh!! This structure lark is hard work).

DO: Think of your characters having to “climb walls, each bigger than the last”, taking them towards that “mountain peak” of story at the very top, in Act 3.

DON’T: Keep everything on an even keel throughout, or make your structure “top heavy”. Save the best for last – that’s what Act 3 is for!

7 thoughts on “Structure Spotlight: 3 Things To Remember For Act 3”

previousQuestion: Has the standard of screenwriting improved? REVISITED
next“It’s A Catch 22!” How To Get Produced Without An Agent