B2W has been interested in adaptation for a long time, so when Savannah and Alex from Foxcub Films got in touch about its own adaptation, I thought the Bang2writers would love to hear about it, plus why adaptation can be such a useful and interesting avenue to go, when filmmaking.

FINGERS is a 1960s gangland adaptation of the story of Salome, the young Biblical princess who famously danced for her uncle/stepdad’s birthday. He was so delighted that he made a vow to give her whatever she wanted and her mother prompted her to ask for John the Baptist’s head on a silver platter… More details HERE. Over to you, Alex!

We all know the difficulties of pitching your project – especially in the context of a two minute “elevator pitch” – or worse, a one sentence logline. How do you explain the intricacies of your concept without sufficient time or space?

The truth is you don’t need to. A potential investor – or collaborator – only really needs to get hooked on your idea, then if they are interested they can ask more questions… This means you need to deliver a punchy pitch that communicates the essence of your story, like:

“A modern day adaptation of the Biblical story of Salome – set in the murky underworld of 1960s London.”

FINGERS TIP: By referencing a story – or stories – that your audience is already familiar with, they become more comfortable in your pitch. However, beware cliches… “Star Wars meets Titanic” makes you sound like a rookie.

Story structure is a notoriously tough nut to crack – and if it doesn’t work – no matter how good your characters and dialogue are – then your film won’t work either. In the case of Fingers, we took a story that has endured for nearly two thousand years … A story that has been repeatedly adapted and reinterpreted ever since. While we all seek originality in our filmmaking – the truth is that such a thing doesn’t really exist. However, it is possible to combine lots of “unoriginal” ideas in a way that is fresh and unexpected.

FINGERS TIP: If you find this depressing, just remember that Shakespeare stole the huge majority of his ideas from other sources. And he was alright! For example, many people think that Salome was an inspiration for Hamlet’s family set up. 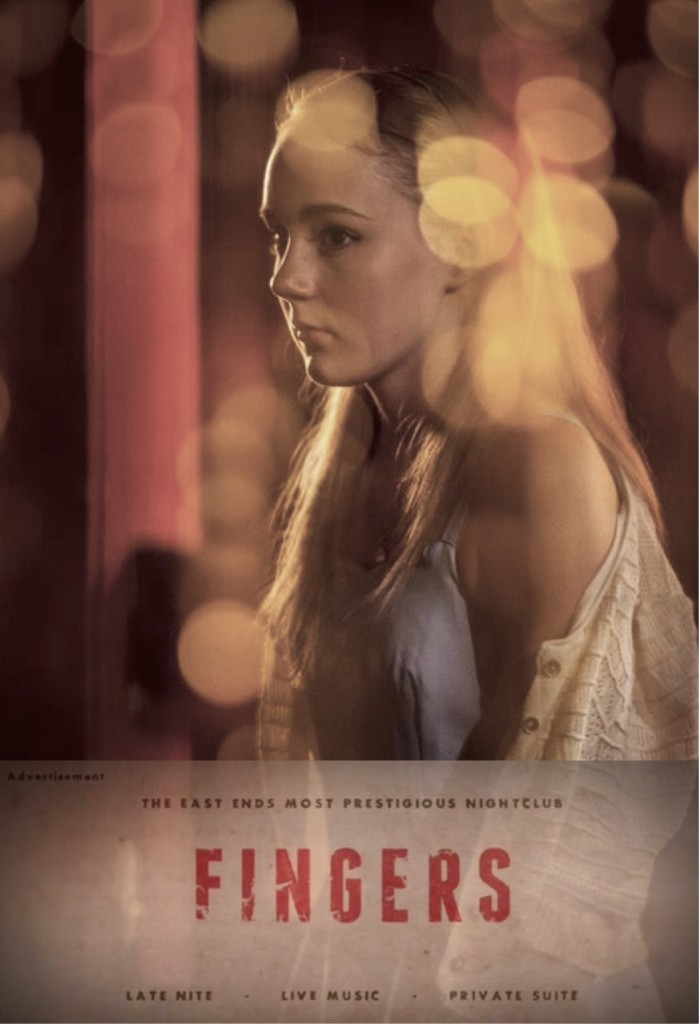 Another advantage of adaptation is that you are able to actually “adapt” the story, choosing what you want to focus on, rather than simply retelling it. I always think that the Artist’s job is one of framing – look at this, not that – and nowhere is this more true than in cinema. We noticed in development that all the previous adaptations of the story (from Oscar Wilde to Al Pacino) emphasised sex, despite there being no mention of this whatsoever in the original text.

It struck us that this is partly a function of the Madonna/Whore dichotomy – women either being presented as virginal and pure OR as sexually active and therefore dirty. As feminists, we wanted to turn this on its head – and offer a new look at what is really a very simple story, containing very few clues towards character motivations.

We asked what would happen if King Herod offered Salome “whatever she wanted” because his young niece’s dance was actually a thing of beauty – rather than because it gave him a hard on! We changed what has usually been interpreted as a psycho-sexual thriller into a tragic coming of age story about the loss of innocence.

FINGERS TIP: Setting a story in the recent past, allows you to say something about the present day in a way that is more accessible. People are forced to ask what – if anything – has changed since then.

By choosing an existing story, you already have an existing audience, in our case people interested in the scholarship of scripture. John the Baptist and his martyr-ship are kind of a big deal for Christians – and many of them contributed to our crowd funding efforts.

By re-contextualising the story we were able to reach beyond this audience. It is a happy accident that we decided to plonk the story in the 1960s – basing all of our research around the lives of the Kray twins. With Legend (starring Tom Hardy, twice) and Rise of the Krays (featuring yours truly!) our release appeals to a massive British gangster flick audience too!

And finally, by choosing to say what we have with the film we are reaching out to an audience of people who aren’t too scared or too stupid to call themselves feminist. These are three audiences that probably don’t have much of a Venn diagram crossover – but hopefully they will ALL find what they are looking for in the film …!

FINGERS TIP: Make sure you know who your audience is. It’s something financiers will ask you about – and if your film doesn’t have one – they won’t give you their money …

BIO: Alex Marx is a London based actor/writer/director. He recently appeared in The Rise of the Krays (Saracen Films) and the BBC production Wellington: Behind the Iron Mask.  In July, he directed a sold out production of new play, Permanence which is due to transfer to Toronto in 2016. He’s currently prepping his fourth short film as a director and developing two feature scripts as a writer.