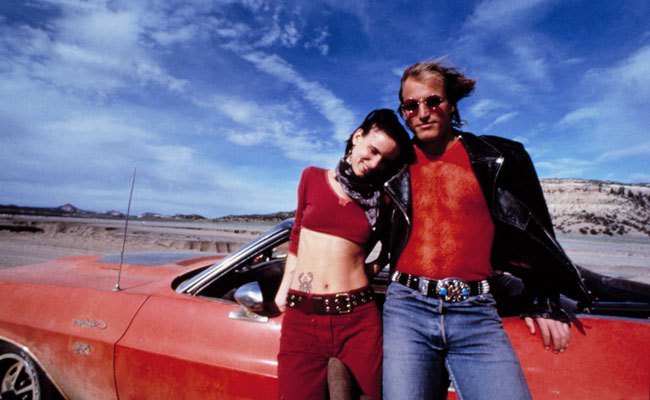 Research shows serial killers and/or people on the run frequently ride out in pairs, yet single protagonists (especially the white, male “lone wolf”) dominates the spec pile and a lot of produced movies and television shows. Why??

So, for a change, let’s take a look at these deadly duos from older films for our inspiration: 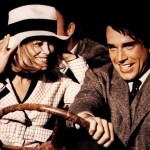 With the real Bonnie & Clyde gunned down eighty one years ago, now seems as good a time as any to revisit the movie, nearly FIFTY years old, yet it still looks pretty fresh. If you’re attempting a true crime story, you can do a lot worse than start here with your research.

I get a fair amount of true stories through B2W, many of them pertaining to infamous figures like murderers and robbers like Bonnie and Clyde. It’s not difficult to see why: drama is conflict and historical figures on the wrong side of the law provide bags of it. The difficulty is frequently what to leave out; what to “massage” and what to plain ol’ lie about, in getting that true story off the page the “right” way. MORE: 5 Times It’s OK To Sacrifice Facts For Drama 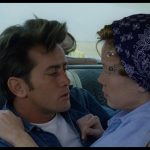 Frequently when writers attempt true crime stories, they will try and get the reader to empathise with the killer. This is understandable, because we want to try and relate to WHY people do terrible things (though usually not condone them, though not always).

If you’re trying to write killers where we understand HOW they got to that point and WHY they are the way they are, then definitely take a look at BADLANDS. Kit and Holly stand up as characters over forty years on because their motivations are so strong and their journey so overt. Watch it NOW. MORE: 12 Character Journeys We Can Learn From (No Real Spoilers) 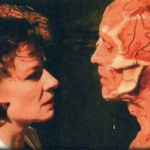 I first watched this movie when I was about nine and nearly had a heart attack. It looks pretty dated now – hence it being earmarked for yonks for a remake – but the movie still raises some interesting and potential horrifying ideas on the age-old notion of, “What WOULDN’T you do for love?”

This is particularly interesting to me as a script reader. This because scribes frequently place this question at the heart of their own horrors, but fail to deliver on it like Clive Barker did. Instead, their plots will lose sight of that motivation and just become a string of grisly scenes, just for the HELL (arf) of it. Scribes need to take a look at this movie and what works in making it fuel their own narratives and character motications. MORE: 8 Mistakes That Will Kill Your Horror Screenplay DEAD 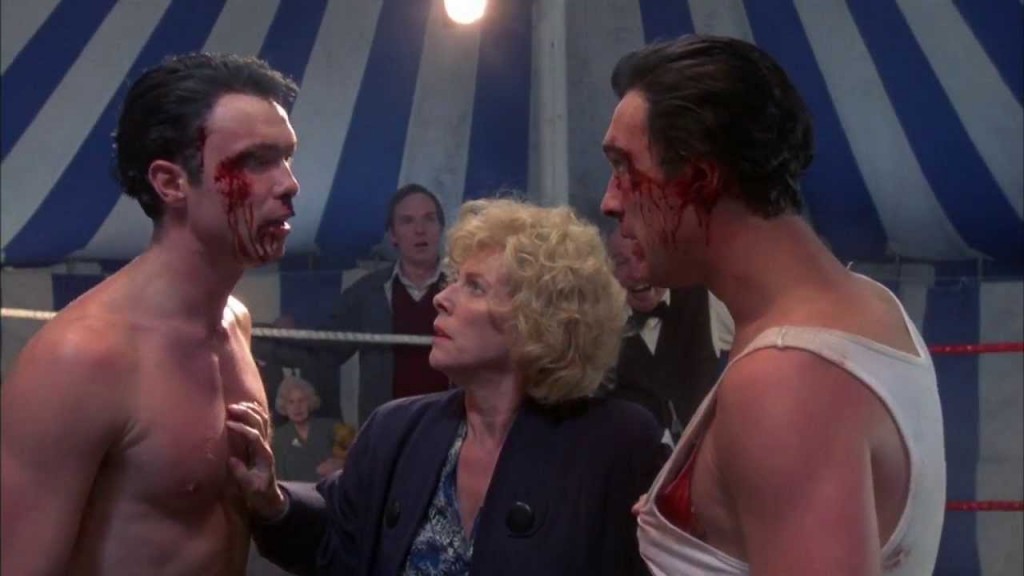 I’ve always been fascinated by twins and it seems the world is fascinated by this particular gruesome twosome, with not one, but TWO Kray Twin films out in 2015, LEGEND (starring Hollywood star and Brit Tom Hardy as both twins), plus much lower budget but “authentic” The Rise Of The Kray Twins.

But what I really like about THIS 1990 version (other than the Kemp Brothers, naturally) is how it brings in their homelife, especially their mother, Violet, played with aplomb by the late great Billie Whitelaw. It reminds us even violent men were children once and there are many reasons they end up the way they do, usually not because they’re straight “evil” either. MORE: How To Attach Named Talent To Your Screenplay 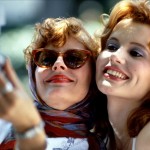 So, whilst technically NOT serial killers, these gals are still a deadly duo as far as I’m concerned, with the FBI and a bunch of others after them throughout the movie.

Whilst male/female teams *might* turn up in produced content (though hardly ever in the spec pile, it seems), two WOMEN hardly ever do beyond the Rom Com genre. For shame, writers! What’s more, especially in action specs, two women might provide the catalyst for the action, but nearly always it’s the men who have the last word and/or clean up after them. YARGH. What’s fantastic about THELMA AND LOUISE then, is they perform role functions we commonly associate with male characters. They’re active and have agency of their own BUT ALSO plant the seeds of their own downfall as well. What’s not to like about that?? So check out this movie and learn from it. MORE: 9 Female Screenwriters Worth Watching 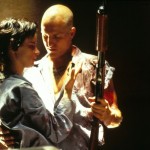 Enigmatic serial killers who are white and male get a lot of time upfront in Hollywood movies. Normally they’re educated too, used to the finer things in life, so a redneck like Mickey as a bloodthirsty cowboy was a refreshing change … and get this, still IS, 21 years later!! WTF?? Proof thinking “left of the middle” when it comes to characterisation really does pay dividends.

However, NATURAL BORN KILLERS doesn’t stop there, because Mickey’s ahem, “better half” Miss Mallory is every bit as deranged and violent as Mickey, proof the female of the species really can be as deadly as the male:

Who hasn’t wanted to kill leering twats in restaurants and bars? I know I have. Plus been here as well:

“WORST fuckin’ head I ever got in my life. Next time don’t be so fuckin’ eager.”

As movies go, NATURAL BORN KILLERS could *almost* be a hyper-real remake of BADLANDS (number 2), so why not watch both back to back and see what’s similar and what’s different? MORE: 7 Screenwriting Lessons From Crime Movies 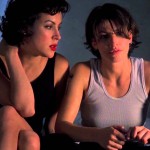 What I love about BOUND is that it would have been so easy to make Corky a man and have Violet run off with him, flipping the V to her ex Caesar, ie. he’s twice the man YOU are. But BOUND side-steps this well-mined territory with panache and like Thelma and Louise before them, Corky and Violet have agency of their own and drive the narrative forwards all by themselves.

Too often screenplays, both spec and produced, pigeonhole LGBT characters into “expected” genres and role functions. We’re used to seeing gay men in particular in Rom Coms, dramas and dramedies; plus very often gay characters will perform the Mentor role function, guiding a (usually younger, usually straight, too often white) character towards an important realisation, usually about love or life. That’s often a positive representation in its own right, but it does get dull.

BOUND in comparison reminds us that just because you’re gay or bisexual does not mean you can’t be an ex con and a thief, or running away from the mafia after trying to scam them. Because: WTF not?? LE DUH. MORE: 4 Tips to Write An Unusual Character

Then buy my book! “Not just a great read for those writing a Thriller, but ANYONE with a serious interest in screenwriting”. Available in ebook & paperback. BUY IT NOW.

Share this:
previous8 Mistakes That Will Kill Your Rom Com Screenplay DEAD
next5 Ways To Evaluate Your Feedback