Being gifted at comedy always makes people popular. Why? Because no one EVER says, “You know what I need to do LESS in my life?? Laugh.”

On this basis then, writing comedy is a great way to get you and/or your work noticed. But, just like other genres that have their own specific pitfalls, comedy is no different. Feast your eyes on these issues that can make your comedy craptacular and your funny fizzle out in your spec screenplay:

Funny dialogue is absolutely essential in comedy screenplays, whether feature, TV pilot, sitcom or short film. However, you do need more than chains of dialogue, even if they ARE hilarious. Forget PHYSICAL COMEDY at your peril! MORE: A breakdown of “The Pen is Blue!” Sequence in LIAR, LIAR (1997)

2) Forget great dialogue is about delivery

This is the thing. Some of our favourite, most classic lines are just not that funny on the actual page. This may include the door gag in ACE VENTURA: PET DETECTIVE (1994), where Ace demonstrates the door is soundproof glass, opening and shutting it whilst yelling in a ridiculous operatic-like tone:

Other times, it’s about context: some scenes are particularly funny because they’re unexpected. In THE HEAT (2013), Ashburn’s foul-mouthed rant is extended, totally out of character and borne of ridiculous frustration, which makes it all the more funny:

Other times, what’s hilarious on the page is absolutely terrible or flat when spoken aloud.  This is why doing read-throughs with actors, whilst important in all genres, is absolutely ESSENTIAL with comedy, so you can gauge whether it’s going to work or not. MORE: 7 Steps To Organise A Script Reading

The hyper-real can be part of the comedy genre, but it doesn’t have to be. You can go for the realistic, the whimsical, the dark, even HORROR! But whatever tone you decide on, you need to be consistent: start as you mean to go on. What’s more, make sure we know what is possible and what’s not in this storyworld, don’t suddenly change the goalposts. MORE: Genre And Tone, A Case Study: BEETLEJUICE (1988)

Look, what’s great about comedy is it’s politically INcorrect, that’s the point of it. However there’s a difference between satire and stereotype, which in turn is different to archetype. Do you know the difference? MORE: Stereotype Versus Archetype

A farce is a comedy that aims at entertaining the audience through situations that are highly exaggerated, extravagant, and thus improbable. Farces are often highly incomprehensible plot-wise (due to the many plot twists and random events that occur), but viewers are encouraged not to try to follow the plot in order to avoid becoming confused and overwhelmed. Farce is also characterized by physical humor, the use of deliberate absurdity or nonsense and broadly stylized performances. Farces have been written for the stage and film. Furthermore, a farce is also often set in one particular location, where all events occur.

I think this is a pretty good definition, plus it illuminates why farce is frequently used in produced sitcoms (which are often in the same set or place): I’ve always loved THE SIMPSONS for its use of farce. Yet I hardly ever see farce in the comedy spec pile, whether feature, TV or short film and this seems a great shame. Get researching and stretching those writing muscles forthwith, because if you can write farce well you could find your work in demand! MORE: On Writing “Rules”: 8 Things I Remember

… As in racist, ableist, misogynist, whatever-ist. Yes, yes good comedy pushes boundaries and plays with expectations. We all get that, plus treading the line can be FUNNY. Will Smith frequently does this in his movies when it comes to race, especially white people’s typical prejudices against black men: 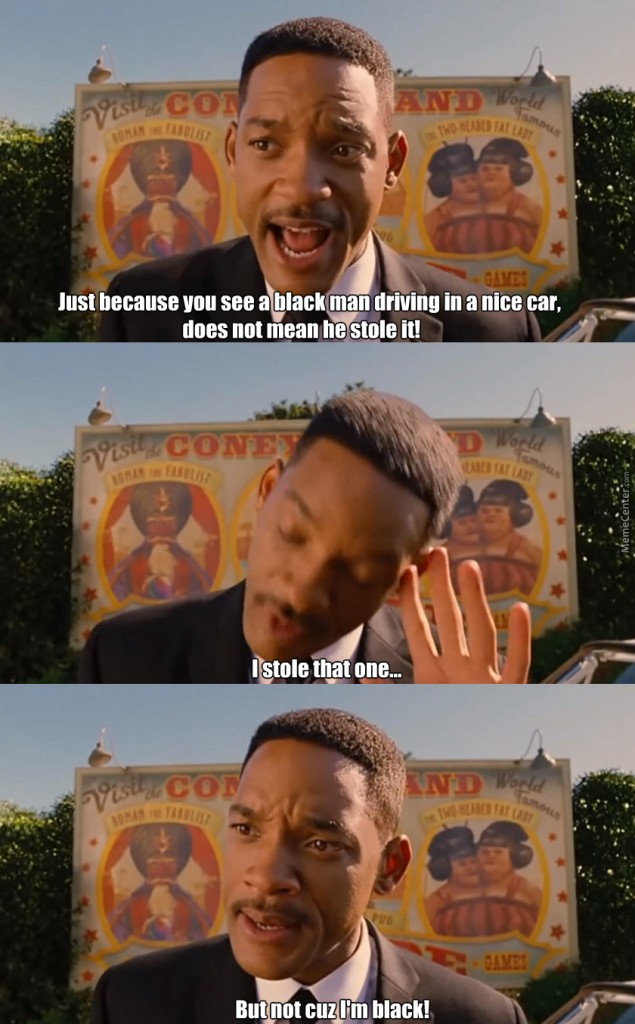 What’s more, what’s funny to one person is offensive to another and there’s no accounting for taste.But do YOU know how far is “too far”? Are you sure?? MORE: Why the “bigger picture” matters, but also why individual perception counts too

Because of number 1 and 2 in this list, writers often neglect their story. In other words, they might set up their characters in some sort of situation, but then just have them standing around, saying funny lines again. Great comedies are great STORIES, too. Never forget that by skimping on your concept. Your great comedy needs to be as marketable as any other genre! MORE: Wanted: Marketable Screenplays

However improbable or hyper-real your comedy screenplay gets, never forget this old adage: “It’s funny ‘cos it’s true.” As long as you include even just a KERNEL of truth in your comedy, people will laugh. End of. MORE: All About Genre And Craft

If you’re gaga over genre, thrown on tone and dazzled by dramatic context, then buy Writing & Selling Thriller Screenplays! Praise for the book: ‘Not merely a great read for those wanting to write a thriller but anyone with a serious interest in screenwriting”; “The SELLING SECTION is an absolute tour de force and could be a book in its own right”; “Like a wise friend is at your side while you write!”. Available in ebook & paperback. BUY IT NOW.