If you follow me on Twitter, you’ll know I will often complain that too much femcrit automatically laments the dearth of female characters. I feel often it’s reductive whining, saying there are “none” or that Ripley (1979) and Sarah Connor (1992) were the last great ones.

ERM, NO! Whilst I’m not exactly putting up the bunting –  MORE Female characters please! – I actually don’t think it’s all doom and gloom, either. I think there have been some fabulous female characters of late, even in action movies. So, check out these lovely ladies and why I think they rock: 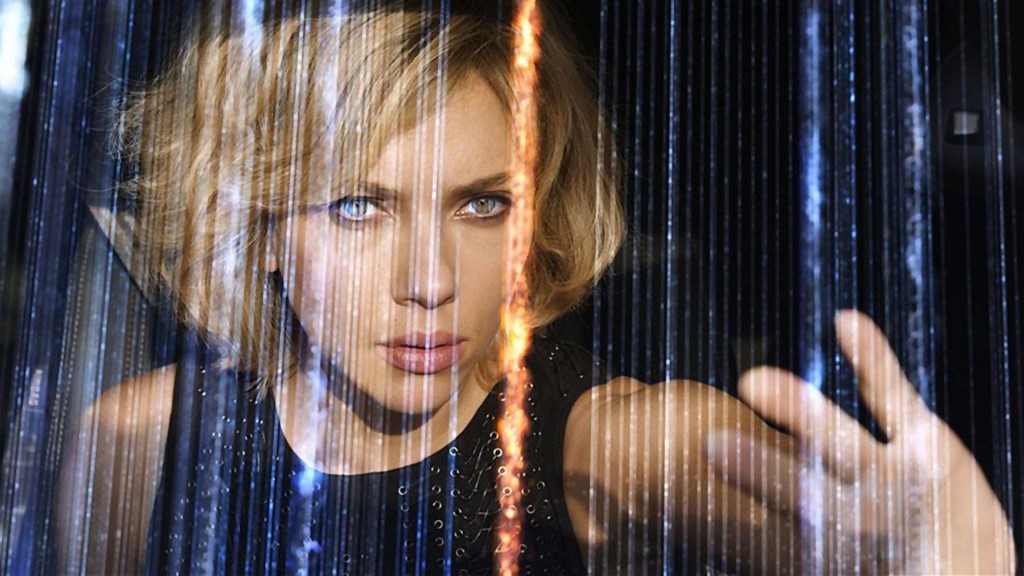 Now barring the obvious contribution of James Cameron and Sarah Connor, Luc Besson practically invented the kickass hottie with Lee-Lou in THE FIFTH ELEMENT (1997), so I won’t lie and say I was expecting a (literal) evolution in LUCY.

Yet I was pleasantly surprised, because it turned out to be one of my fave action movies of 2014. I’m not normally a Scarlett Johansen fan, but she is electrifying as our heroine: her transition from easily-led, naive girl through to Higher Being is staggering. Favourite bit? Gotta be calling her mother to say goodbye at the hospital. SOB. MORE: 5 Things I Learned In A 10 Min Q + A With Luc Besson

So, Sandra Bullock is well-known as the poster girl for great female characters, even in genre films. Arguably Ryan Stone is the pinnacle of her career and rightly so, because as far as I’m concerned, GRAVITY is a kickass movie with great effects, a fantastic heroine and a simple, but effective storyline: survive at all costs.

The survival story is one we have seen men enact time and time again, even alone (I AM LEGEND, anyone??) yet it’s not often we see a female protagonist dominate the story and indeed the actual FRAME as effectively as Stone.

But what I particularly love about Dr. Ryan Stone is that, if you swap her fate with her male colleague Matt Kowalski’s and have him survive instead, guess what?? NOTHING CHANGES, beyond the desire to survive (even if it may be for different reasons). There are no gender politics here, just a character’s individual journey, both literally and metaphorically. Progress in action. Awesome! MORE: The similarities between GRAVITY and LUCY 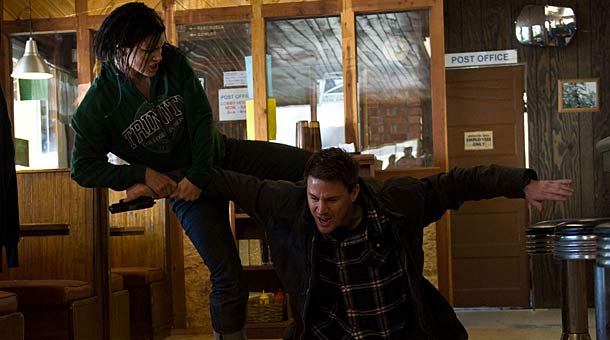 “Don’t think of her as a woman. That would be a mistake.”

HAYWIRE is a criminally underrated and kickass action movie and in my somewhat biased opinion, Soderbergh’s best film (written by Lem Dobbs). Gina Carano is not an actress I’d noticed before her star-making turn here, but it’s not difficult to see why she got picked! In addition to her very real fighting skillz, Carano is attractive but more importantly, a great actress to boot.

It would have been so easy to make Mallory the typical ass-kicking ice maiden, but HAYWIRE avoids this well-mined territory with ease. My favourite part has to be – besides Mallory squeezing the ubiquitous Michael Fassbender to death between her thighs (obvs!) –  when she kidnaps the young buck from the diner.

Even though he’s in mortal terror and fearing for his life, not just from her but the guys chasing them, Mallory seems so nurturing, telling him he’ll be “fine”, almost like a parent, whilst single-handedly taking on the bad guys, driving AND tending to her wounds. The epitome of multi-tasking. Nice one. MORE: 5 Reasons JJ Abrams’ STAR WARS Doesn’t “Owe” Anyone Gender Diversity

The only WoC on this list and she’s not even the protagonist, which as I’m sure we’ll all agree is poor show in terms of the status quo *generally* in Hollywood. That said, Mako Mori is *not* your typical female secondary character by a long shot and this is in no small part down to screenwriter Travis Beacham’s writing.

Mako is neither solely sexualised or kickass; nor is she the sciencey type who exists solely in an expositional function to fill in white characters on useful stuff at the end of the world. Instead she is capable, with a quiet strength and if she “has anything to overcome, it’s no worse than her male counterparts”, as Wolfblood’s Debbie Moon points out in this round up of industry experts’ favourite recent female characters. A refreshing change to be sure and I look forward to seeing more female characters who are also WoCs, not only in secondary role functions but in the protagonist’s – and antagonist’s! – roles too. MORE: The Powerful Feminist Theme Of THE WOLVERINE

Charlize Theron is one of my favourite actors and like Bullock, she has made a great living playing really interesting, flawed women, both in drama and genre films. But again, I think it’s this one that’s the pinnacle of that brilliant career and it will take some doing for Theron to surpass it.

Furiosa is a ferocious woman out of necessity: she can take care of herself and she fears no man. Writer/Director George Miller could have written her as the typical “man, with boobs”, but he doesn’t. Furiosa is not only capable – she has seen to it that only she can drive the war rig – she is also shrewd and clever, planning her escape from the citadel and Immortan Joe’s clutches literally for years.

Had Furiosa been a male character, she possibly would have slipped away, a lone wolf like Max. This is what we expect heroic characters to do, only to have a change of heart and turn back, which Max literally does!

In comparison then, Furiosa will take as many as she can with her, including Immortan Joe’s wives. This is not just because she hates Joe and wants to liberate the women (which she does on both counts), but because those wives are also conversely her best protection … In the ensuing chase, Joe consistently calls his War Boys off, lest they harm the wives by accident. Booyah!!

Intriguingly too, Furiosa is an amputee and has a specialist robotic arm. She never talks of what happened to her arm (though naturally we assume it was a War Boy, or maybe Immortan Joe himself). Nor is Furiosa’s arm part of any clanger revenge plot dialogue, ie. to Immortan Joe, “You took my arm … now I take your life!” YIKES.

It’s important to remember The Mad Max storyverse has included disabled characters from the very beginning of the franchise (remember the old woman with the gun in the first movie, or her son, who is SEN? Or the cop with the mechanical voicebox?), so MAD MAX: FURY ROAD is no different in this regard. 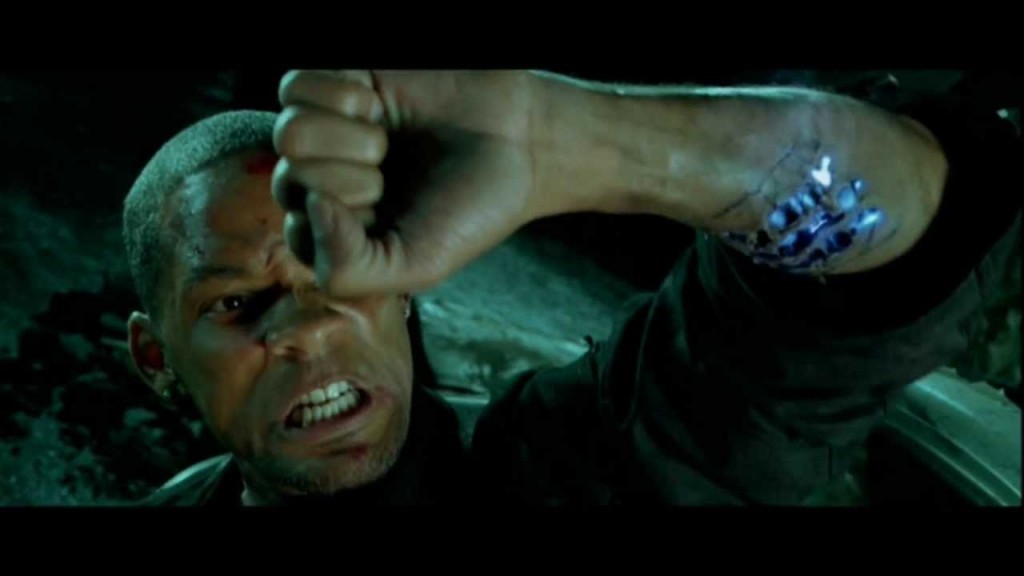 What IS different, is that Furiosa’s arm is a plot point. She does *something* [NO SPOILERS!] with it she could never do with a flesh arm. In this regard, Furiosa’s arm is rather like Detective Spooner’s from I, ROBOT (2005) – oh, another Will Smith movie! Fancy that.

Anyway, Spooner’s own robotic arm is also a plot point. In fact, his involvement with Langham and subsequent investigation into the scientist’s death is BECAUSE of that arm. In addition, there are a number of times in the narrative Spooner is able to do things with that arm that simply would not work with one made of flesh. Just like Furiosa. In essence, their arms are not so much disabilities, but UPGRADES.

Now, I don’t know about you, but I’m pretty excited to see action movies suggesting differences are not necessarily disadvantages. HOWZAT for diversity?? MORE: Diversity Vs. Reality? 6 Questions For X MEN: DAYS OF FUTURE PAST

For more on female characters & Thrillers: