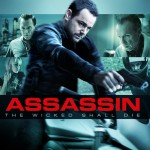 “The Package” is basically a set of notes that goes out with a feature screenplay, usually sent by a producer, either to help make the film or for some other reason (ie. secure distribution). As far as I know, there is no “industry standard” for these documents, but I’ve found they usually run between 5 and 10 pages, though I have seen much longer.

In my job as a script reader and script editor, I come across packages most often via funding and investment opportunities: filmmakers will come to the places I am reading for and ask for money, so will offer up the package basically to show they know what they are talking about and *can* deliver (this may seem like a no-brainer but this business is known for being flakey, so the more credibility someone can offer upfront when asking for £££, the better).

I am also hired to write package documents for filmmakers, so it made sense for me to write the package for ASSASSIN, as its associate producer. Packages are notoriously difficult to get hold of (oooh matron!), but there is NO “set way” for these documents to appear. Like spec TV series bibles however, if you see enough of them like B2W does, we can usually see variations on the following in each one:

1) Logline/Short Pitch. Usually between 25 and 60 words and remember, Loglines Are Not Taglines!

2) One Page Pitch. These have really caught on in the last few years and usually describe Act 1 and Act 3 aka the set up and pay off, to “entice” the reader and make them WANT to read the screenplay … Read more about them HERE  and see a One Pager Ref Guide, HERE.

3) A Synopsis aka Extended Pitch is sometimes called a “sizzler” and is usually between 2 and 3 pages. (NOTE: If this is included in a particular package, it *can* be seen as overkill to have the One Pager as well). Read more about Extended Pitches, HERE.

4) Director’s vision / Producer Notes. One or both of these may be part of the package. These are often highly personal accounts and probably run from half a page to a page total. A Director’s Vision may talk about previous projects that have influenced his/her filmmaking; or if the film is not made yet, HOW s/he intends to make it. Contrary to popular belief, no GOOD producer gets involved with a project s/he does not believe in, so s/he may say why she has backed this particular project, or talk about certain story or thematic elements that attracted him/her to the project. Sometimes this includes information about budget, but generally speaking Producers will submit breakdowns and costings in other paperwork to investment schemes and companies I’ve noticed, so again it can be overkill to put it here as well. MORE: Money Talks – Film Budgets

5) Story Notes aka Storyworld aka something else. This part of the package may be text-based or visual, or both – it may also be titled all sorts of things, too! Sometimes packages will include “mood boards” which will be photos of certain elements – concept art, backgrounds, locations, costuming etc – that give an idea of the tone and style of the movie; in my experience, these are most common in packages of films NOT made yet. In movies that are made, there may be stills of certain important scenes or striking images from the film. Whatever the filmmakers decide to include, this section is probably 2 or 3 pages long. MORE: All About Arena And World Building.

5) Film Facts. I’ve noticed this part of the package is more often included in films that are actually produced, than speculative. Film Facts more often than not will include information on filmmakers’ and cast’s previous productions, accolades and awards; who else is attached (ie. if the Executive Producer is someone of note); plus any elements (ie. thematic) that didn’t fit anywhere else. Our film ASSASSIN has one of these pages in its package. MORE: Take Chris Jones’ GONE FISHING Film Production Seminar online, HERE.

6) Cast & Crew bios. Packages will most often only include the MAIN characters – and this is where NAMED TALENT really comes into its own!!!  Smaller and peripheral roles will generally not be included, again unless they are cameos by VERY famous/notable people. Included Crew is ALWAYS the director and “main” producer; plus the screenwriter (IF different to the director and/or s/he has good credits, not so much if the screenwriter has none I’ve noticed!), plus anyone else of note (ie. Director of Photography), especially if s/he has won awards or is notable in any other way, ie. as an industry thought leader or activist.

In real terms, The Package is just another opportunity to sell your feature screenplay and/or film “off the page”. It’s essentially a showcase, “look what I CAN do” (or in produced films’ case, “HAVE done”) and work best when trying to secure finance and/or distribution. Filmmakers may send these documents out to potential investors, screen agencies, funding initiatives, casting agents, distributors or other people who can get the film made and/or sold, dependant on where the filmmakers are in the production journey.