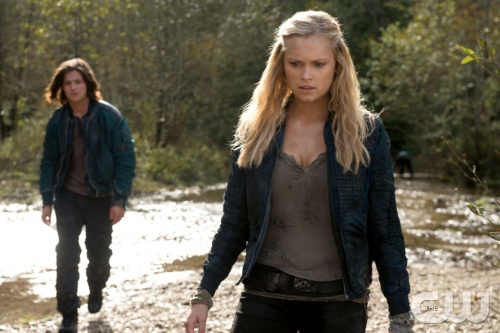 When it comes to worldbuilding and writing, I think this definition from Wikipedia is actually pretty good …

Worldbuilding is the process of constructing an imaginary world, sometimes associated with a whole fictional universe. The resulting world may be called a constructed world (or conworld). Developing an imaginary setting with coherent qualities such as a history, geography, and ecology is a key task for many science fiction or fantasy writers. Worldbuilding often involves the creation of maps, a backstory, and people, including social customs and even in some cases an invented language, for the world.

So with this definition in mind, here’s how to tackle worldbuilding in your novel or script, using The CW’s pilot of The 100 … Enjoy!

Based on the dystopian YA books of the same name by Kass Morgan, The 100 is set 97 years after nuclear war killed everyone on Earth. Luckily, there were some astronauts floating about in space stations. The survivors all combined to make “The Ark”, civilisation’s last stand.

Now, four generations later, things suck on The Ark. Supplies, including life support, is running out. Even the most small of crimes is punishable by death … unless the citizen is under 18. Cue THE 100!

Characters And Plotting in The 100

Juvenile deliquent teens who have committed crimes are sent down to Earth, to see if it’s now habitable. Amongst them is Clarke, our teenage female protagonist, whose father was “floated”. (Executed, by being shot out The Ark’s airlock).

Clarke was a previously privileged member of The Ark. She is pitched against a number of others, most notably Wells, The Chancellor’s own son. Also power-hungry Bellamy, who has sinister plans of his own for The 100.

Overall, I enjoyed the pilot for THE 100 enough to plan on tuning in next week. It’s basically “Lord of the Flies”  set in the future … Concept-wise, that’s pure gold. It’s nice to see female characters dominating the frame so much, too.

But regardless of whether you liked THE 100 or thought it was dried-up bobbins, one thing its TV pilot does is especially well is worldbuilding.

On Exposition and Worldbuilding

As I’ve written countless times on this blog, I read a LOT of sci fi features, TV pilots, shorts and novels. Writers often give the reader TOO MUCH or TOO LITTLE background information in order to *understand* the story. Eeek!

This is obviously a big deal. Science Fiction Arenas & Worlds NEED to be understood. So here are my tips to creating your arena in your screenplay, or worldbuilding in your novel, using THE 100 (TV pilot only) as a case study.

The obvious one. Whether you’re writing a screenplay or novel, your story and character have to be introduced TOGETHER. In THE 100, we start with our protagonist, Clarke, in prison. Within about 2 minutes, she’s been ordered out her cell, has said goodbye to her mother and is being packed off to Earth. In other words: super fast! Your story needs to hit the ground running like this, too.

2) Use Visuals As Introduction

As mentioned in my previous point, THE 100 starts with Clarke in her cell in The Ark. This could have been a very dull, very boring visual to open with. Instead, the pilot opens with Clarke drawing a forest on the floor of the cell, hinting at what is to come next (The 100 LAND in a forest, on Earth). This also tells us Clarke is a bit of a rebel (ie. she’s not supposed to do this). As an added bonus, it makes a good visual link between Clarke and her mother Abigail, who ends up in the same cell later on in the pilot.

So, what visuals could YOU use to introduce us to the storyworld and its characters? 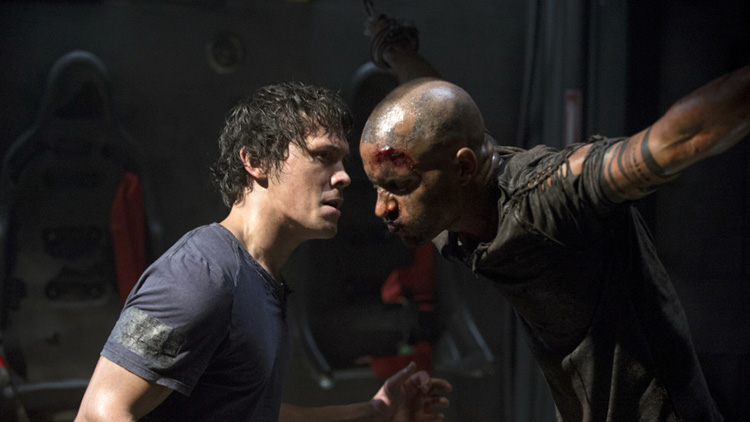 3) Have us find stuff out WITH the characters

This is crucial to worldbuilding. In THE 100, the adults have no idea if Earth is safe or not … So the teens don’t either. The Chancellor makes an announcement to the teens via a screen in the shuttle. He wishes them good luck and tells them there is a nuclear shelter in some mountain near  the dropzone. When they hit the ground, they discover they’re on the wrong mountain. Groan! They have a twenty mile trek ahead of them.

It is decided Bellamy and the others will stay at the dropzone. Clarke and a band of others should go and try and retrieve supplies from the nuclear shelter. As Clarke and the others make their journey, they find the answers to various questions *anyone* would have landing on a planet after 97 years, such as …

Crucially however, all of this happens not via talk, but via ACTION.

4) Reveal what characters are like via their actions & worldviews

When they land, Bellamy goes to open the door of the craft and Clarke tells him not to, in case radiation will kill everyone. Bellamy, a fatalist, points out that if that’s the case, they’re all dead anyway. So they open up the doors and … don’t die straight away.

Later on, Clarke frets that they may still be dying, just slowly, from radiation. Since he’s still alive, Bellamy is already making plans to take over the group, by recruiting others to his “side”. Clarke may be a brave freedom fighter, but she’s already seen her father “floated” … So she doesn’t want to die. Bellamy in comparison wants power. They have different motivations, thus this informs their actions accordingly – ie. what they DO in the story. Remember point 3 here, in particular!

5) Create group dynamics in your worldbuilding

In the pilot, lines are drawn in the sand between characters with abandon. The privileged versus the poor in particular, but also those who are “criminals” versus those who are not. This is a particularly interesting choice, because by Ark law ALL of the teens in THE 100 are designated criminals. However, as with real life prisons, there is a hierarchy established form the offset, eg. …

The great thing about group dynamics amongst characters then is it not only aids characterisation, but plotting as well. Bellamy is filled with resentment at his mother’s execution, which leads him to want to take The 100 for himself, so they never go back to The Ark. In other words, we’re back to this notion of motivation, as in point 4. 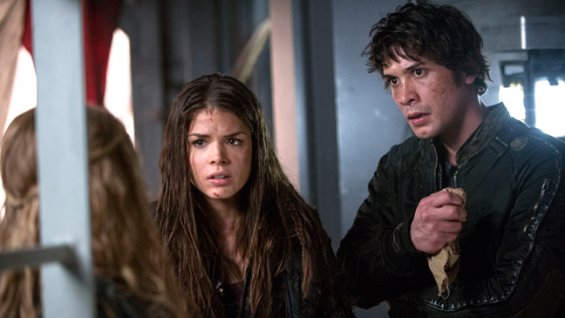 It’s important to note there are no extraneous flashbacks in The 100 pilot. We never see Clarke’s father or Bellamy and Octavia’s mother getting arrested or floated. Crucially, we don’t need to. Instead, we hear about these things, via dialogue.

“But WTF?” You say … “Characters are not what they say, but what they do!”

Yep, you’re RIGHT. So you don’t SPLURGE it all in one go, but mete it out here and there, disguised wherever possible! For example:

The 100’s shuttle is very old. The teens are not even sure it’s going to make it at one point as they hurtle towards Earth. Wells, sitting next to Clarke, turns to her and tells her that if they’re going to die, he doesn’t want to die with her hating him … Please forgive him? She replies that he got her father killed. She DOES hate him and she WON’T forgive him!

This is a great bit of writing because now we understand that Wells and Clarke have “got previous” … BUT we’ve also got the distraction of the (probable) shuttle crash going on around the characters! It is also believable that if you think you might die, you probably WOULD want to get something off your chest. We can also believe that someone like Clarke who values honesty would answer like this if she thinks she’s going to die, too.

It’s the same with novels, too. When it comes to backstory, go for a sprinkling here and there, amidst various “distractions”. Good characterisation is ALWAYS worth more than a big solid chunk of chewy exposition.

This is the thing. Audiences will forgive a little bit of obviousness, but they never forgive even the smallest speck of obscurity. The 100 knows exactly who its audience is … ie.

As a result, in THE 100 pilot there’s some violence, some threat, but generally it’s not OTT. There’s barely any swearing, though some thematic posturing over the nature of power (which secondary school kids cover in theory in History class). Miss Skimpy Pants might strip down to her knickers and vest, but we don’t even get any lurid close ups of her chest.

In short, The 100 is the TV equivalent of a 12A and I’m guessing the novel was too, since it’s YA. whether writing a Sci Fi Screenplay or novel, you need to know too!

So, when attempting your Science Fiction screenplay or novel:

OH would you look at that … Science Fiction is the same as ANY storytelling! Fancy.

Don’t forget: all the B2W PDF downloads are now available together, via the main site HERE!