Many thanks to Lesley, who has boiled down Robert McKee’s STORY for us into ten handy bitesize chunks to help us write our screenplays AND novels! Enjoy … 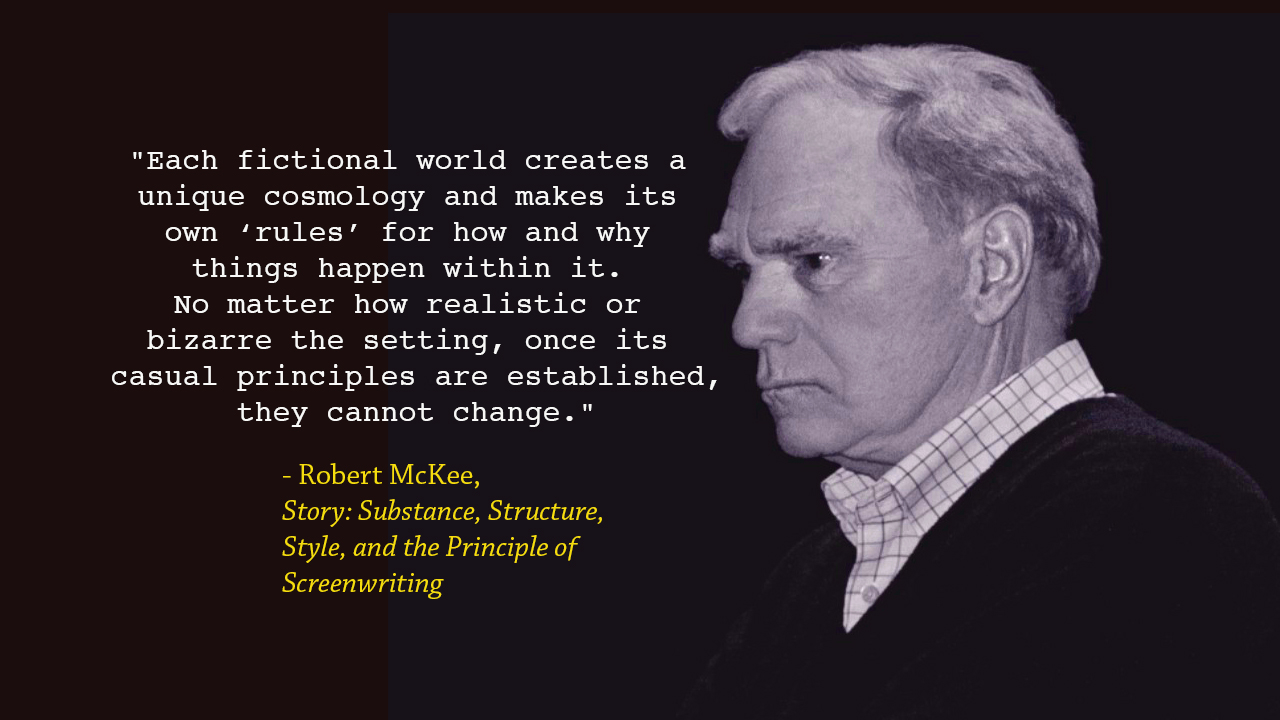 McKee on world building in your story

The above quote sounds quite controversial, doesn’t it? But then, Robert McKee IS controversial. Many people call him a screenwriting guru, but why is he so popular?We can’t name anything extraordinary at once: he is a writing instructor, he travels a lot with his Story workshop, he teaches authors to write and he tells directors how to make movies.

“There are too many so-called gurus!” you might say. And you are right! However, McKee is a man who teaches Hollywood. They say the only celebrity who has never attended McKee’s seminar is Steven Spielberg … And all the others were either his followers or enemies!

But McKee is a writing expert worth your attention, if you dream of winning an Oscar for “Best Original Screenplay”. McKee will not teach you any mechanical aspects of writing (though they are important for every author to remember). This man will reveal secrets on making every aspect of your story hit the target, no matter what you write – a movie script, OR a novel:

There is one very important thing for you to remember and keep in mind while writing: the protagonist of your story should have A GOAL, as all the events that happen to him will influence the ways he chooses to achieve this goal. One event should be present in every scene of your script; do not write any additional scenes to tell a biography of your character, because it will make the audience bored. They should learn the protagonist from the events he takes part in. MORE: 9 Ways To Write Great Characters

Together with a protagonist, your antagonist plays a very important role in the story, and you should never underestimate him! The stronger and craftier your protagonist is, the more interesting it will be for your audience to observe his confrontation and struggle with the protagonist. MORE: Beyond “Goodies Vs. Baddies”

A protagonist should always overcome different obstacles to achieve his GOAL; so, if you do not have them in your story – create them! But remember: these obstacles must be clear and understandable for the audience, they should see how the protagonist risks and sacrifices something very important to reach his goal, plus how he demonstrates his will and spirit. MORE: Yves Lavandier’s Notion Of Climbing Walls, “Each Bigger Than The Last”

Never write a scene where nothing important is gonna happen! Illustrate a protagonist’s deeds and actions in every scene of your story, make these actions a turning point of the story, let them demonstrate the protagonist’s motivation without creating any separate scenes for it. MORE: 20 Killer Errors In Scenes

As we know, actions can provide much more information than words; that is why you should not write dialogue when you have an opportunity to illustrate something with characters’ actions instead. Dialogue should be clever, witty, and clear for the audience to understand and take enough information from them. Learn to say much with minimum words. MORE: Daniel Martin Eckhart, “An Ounce Of Behavior Is Worth A Pound Of Words”

No one is interested in didactic stories where speech is similar to some kind of a sermon. Do not write long monologues to teach obvious things to the audience: they will understand the moral of your story without all those monotonous homilies we all hated to hear in school! MORE: 6 Reasons Dialogue Is Your Enemy

Being a writer, you clearly understand what a writer’s block is: it’s that unpleasant moment when you have no idea what to write about. The ugly truth is such a block usually appears because of a lack of information (not inspiration. So, read books and make your own research to use this information together with your imagination and personal experience. Often, imagination is not enough for a really epic scene’s creation. MORE: The Importance Of Research

Scriptwriting differs a bit from writing a novel. When a person (an actor, a producer, a director) reads your script, they should have a clear picture of every scene; so, think carefully of the words you use. Try to name objects and describe actions clearly, using vivid words. MORE: Film Doctor, Tighten Your Writing

90% of your writings is trash. It’s sad… but true. It could be years before you succeed; so, get ready for a long and difficult road to success. Do not be afraid of failure; it is a natural part of achievement! If at least 10% of your writing ends up good, you may consider yourself a lucky guy already. MORE: Self Belief: Can Do Attitude

Your readers are not idiots, and they will never believe the concept of your story if you do not believe it yourself. Remember, your story is your own vision of this life; so, be honest with your audience and write about your own beliefs to make others believe you. MORE: All About Your Writer’s “Voice”

What do you think of these tips from Robert McKee? Share your thoughts in comments!

BIO: Lesley J. Vos is a novice writer. She works as a private educator of French language and a blog writer of Bid4Papers company. Lesley gets ready to publish her first e-book this year and you are always welcome to contact her via Google Plus.