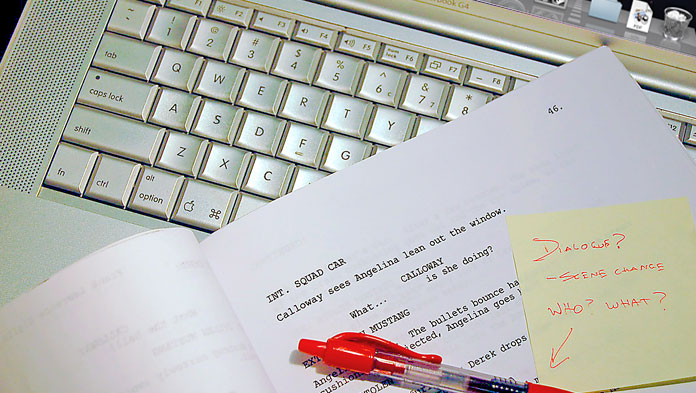 So, I’m in/famous for insisting there’s too much dialogue in *most* spec screenplays AND that scene description AND format can be a major issue in a huge proportion of them, too — yet many of my Bang2writers confess they’re not really sure what to do about the first two issues in making their screenplays’ stories “flow” better for the reader.

So major kudos to plucky Bang2writer Kym Wimbus who has very kindly stepped in and provided me with a scene from his Thriller screenplay, MAINTAIN THE RAGE which I will duly script edit for you*, right on this blog, so writers can have a case study of how to work on their own scenes.

1) First up, here is the original scene Kym sent me.

2) Secondly, here is the scene, with my notes on the actual page for clarity’s sake, since this is a blog post (for those of you interested, **how** I edit an individual’s screenplay may vary; some writers like me to actually write on their scripts like this, but generally over the years I’ve found the majority like discussion and/or emailing and working my notes into their own heads and where applicable, pages).

3) Thirdly, here is a “clean” version of the rewritten scene, based on my notes. (FYI – It’s really important to note these are just my suggestions, I’m NOT telling Kym what to do, or saying my version is “better” — for one thing, I rewrote the scene in about ten minutes, so it’s obviously not going to be the best it can be! Instead, my changes are just for illustrative purposes).

So, why did I approach the rewrite of the scene this way?

Screenwriting is a visual medium, yet the original scene does not start visually. Instead, it’s two characters simply talking, making it more like a stage play. This is the case with probably most specs, so if you want your script to stand out, you need to get used to the idea of not just providing an opener on page one, but in EVERY SCENE. Where does it start? How does it push the story on? What does it reveal about the plot and/or characters?

In this case, Ryan is a bit of a pretty boy and womaniser; he’s also much more naive than Andy and believes too much in appearances … which will end up screwing him over later in the story, making me choose the shaving motif, especially as knives figure in this screenplay too.

MORE: How To Make Your Screenplay Visual, plus 6 Reasons Dialogue Is Your Enemy

2) Be Character Specific, Not Generic

In the original scene, the two men are talking about a woman, but this doesn’t really say *much* about them as characters (we *may* assume cops are  “blokey” like this anyway), plus it seemed to me like it’s introduced just so Andy can say, “you’re like a son to me” to connote the fact he is older than Ryan and they know each other well.

However, with Andy’s teasing – “Princess” – and Ryan’s taunt about Andy’s wife (which Andy then laughs at), we get the idea of who they are as characters and what they mean to each other. It also feeds in to both their characters: Ryan as the womanising pretty boy (as mentioned), but also Andy as the veteran older cop.

MORE:  Top  5 Reasons Writers Screw Up Their Characters, plus 4 Tips To Write An Unusual Character

Scene description is a little flowery in the original scene, so I cleaned it up here and there, ie. when Jimmy hears the two cops talking, I make use of the phrase “can’t believe his ears” as a sentence fragment and the acronym “WTF?” to convey his reaction. This sort of thing “for colour” is fine and can even add impact to a scene, if used “well” (ie. sparingly).

Also, in the original scene, the writer makes reference to Ryan wanting to be involved in the case. This has “no image” and whilst scene description CAN be added for “colour” as previously mentioned, **this** is arguably a step too far as the audience can’t possibly know what’s going through Ryan’s mind.

In my version then, I cut it altogether and it works quite well I think, though an alternative could be a visual or audio device like Jimmy’s heart thumping or hearing his ragged and panicked breathing “inside his head”, though personally I feel this is a bit overdone at present in produced content.

MORE: 10 Ways To Revitalise Your Scene Description, plus @Film_Doctor‘s article, Tighten Your Writing and 16 Steps To Better Scene Description by screenwriter @wcmartell and The One Craft Element That Can Kill Your Script DEAD from @scriptmag.

4) Hide / Break Up  Exposition Whenever You Can

As with many crime screenplays, there’s lots of exposition regarding the crime itself, which in this script’s case is the killing of Jimmy’s own son. Other scripts that may have lots of exposition include science fiction or fantasy worlds, or screenplays that require some detail about an event, procedure or artefact an audience may not be familiar with and need more information on.

The issue then with the original scene is Andy essentially “feeds” Ryan the important information about the crime. There’s a subtle difference in my version, using the characterisation that Andy is Ryan’s superior: as a learning exercise, he “leads” Ryan’s OWN realisation about the ladder, thus “filling in” the audience on WHY the police believe Jimmy killed his son.

MORE: 5 Ways To Beat Exposition, plus An Ounce Of Behaviour Is Worth A Pound Of Words by Thriller screenwriter @dmeckhart

5) “Clean Up” The Page As Much As Possible

As I’ve said copious amounts of times, good format is not about “rules”, it’s about not getting BUSTED. So in other words, do what you like but if you’re going *beyond* the expected, make sure you a) know what IS expected and b) make it reallllllly count! This means doing all the non-negotiables mentioned, such as ensuring dialogue is not generic or expositional and that scene description is lean and as vital as possible. MORE: The Format One Stop Shop, plus 7 Ways To Showcase Your Writer’s Voice

Kym’s original scene is certainly NOT “terrible”, but for an experienced script reader it does signify a new writer who is still working on his craft. This is mostly because of a lack of visuals, with a tendency to rely on dialogue to reveal plot and character instead. As a result, the script seems more theatrical or “play-like”, just like so many others in the pile. Writing great visuals that reveal both character and story is what REALLY separates the pro writers and the aspiring, so my advice is: go for the visual wherever possible, it will only stand your spec AND your screenwriting career in good stead. By the way, you can chat to the plucky Kym HERE on Facebook.

(*Do note: this a microcosm of the script editing process, so must be taken as such; it’s usually quite far down the road I end up looking at scenes under the microscope like this, usually just before the shooting script stage … If you hire me to read your spec screenplay, unless it’s already developed and already ready for shooting, I’m most likely to common on character, story, structure etc from a more “holistic” POV.)