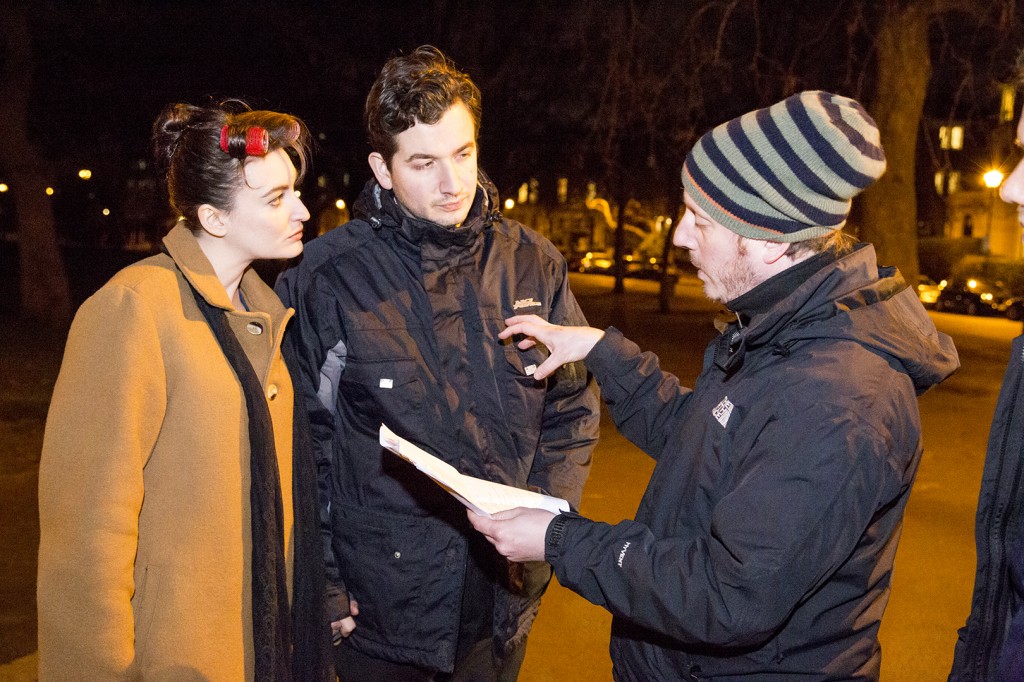 Everyone’s looking for that micro-budget breakout project. The next Following, Paranormal Activity or Blair Witch Project.

But how do you make yours stand out? And how do you turn your script into a micro-budget film? We’re midway through filming our debut feature project Kidnap Me, for a budget of virtually nil, so I thought I’d share some thoughts and lessons from its development and production.

Kidnap Me is a comedy. An edgy black comedy of love, sex and mistaken identity. With spanking. In a marketplace packed full of zero budget horrors, rape-revenge thrillers and Richard Curtis knock-offs, ours stands out as something different. The kinky sex angle is our USP and in the wake of 50 Shades of Grey, one with an identifiable audience. MORE: What’s your USP – Part 1 (The Project) and What’s Your USP – Part 2 (You, The Writer)

2. Have a high concept

High concepts don’t have to be confined to Hollywood and Don Simpson – they apply at the microbudget level too. Kidnap Me’s concept is that of a mistaken identity kidnap & ransom, with the twist that the victims are enjoying it more than the perpetrators! We’ve hung the whole of the movie around this concept, so half of the film is four people in a room. That’s four actors, one location – microbudget heaven! MORE: 7 Steps To Road Testing Your Concept

Single location stuff’s great, and an hour of people talking in a room is fine for theatre, but not for cinema. Every scene, every page, every line has to move things along. We play with dramatic irony – who knows what & when – and loyalties and team-ups shift constantly. If the characters and relationships are in the same place at the end of the scene as the beginning, it’s not doing enough. It took a long time and a lot of rewrites to get this working – and I can’t stress the value of having actors read it through! It was SO much easier to see what lagged and what didn’t once they were actually rehearsing it. (also, no matter how much you cut, you’ll still overwrite and end up trimming in the edit). MORE: 3 Tips To Avoiding Static Scenes

One iteration of Kidnap Me’s script involved a high-octane action-packed third act which involved numerous extras, stunts, SFX and fight sequences. We wanted to turn it into a comedy Die Hard after the containment of Act 2. But we couldn’t get it to work, and the reason was tone. It was too much of a lurch into another genre, and it was jarring to everyone who read it. The key was to remember the tone and keep it consistent. It’s a comedy – keep it funny! Our new ending also made it a much cheaper proposition which allowed it to become truly microbudget. MORE: Beetlejuice: Genre & Tone, A Case Study

Whilst the majority of Kidnap Me is based around our four leads, there’re two or three killer one-location, one day scenes designed for cameos. If we can get them, we can easily (and cheaply) slot in a name for a day. And names on posters mean audience recognition, and sales & distributor interest. MORE: 3 Issues With Casting

6. Write your location to be flexible

When we started scouting locations for the Kidnap Room shoot, our options were limitless. It could be a domestic flat, an industrial warehouse, a mechanic’s garage. Each would’ve worked, as we’d written it so that our kidnappers were the types that would use pretty much anywhere they could break into without putting much thought behind it. This was a huge help as it meant we weren’t constantly striving to find that perfect place that fit the script, but we could adapt and adjust the script to the place we found. MORE: Writing The Low Budget Screenplay, Part 1

7. Put the (more) expensive stuff at the beginning of the film

A lesson gleaned from Eran Creevy. When talking about his microbudget film Shifty, Eran mentioned that his editor remarked that you can see the film’s budget in the first half hour, which meant that the film starts in a series of council houses with a few people talking. We took this idea, and rewrote the film so that the most expensive stuff – i.e. extras, locations, special bits of kit etc – happens in the first 25 minutes. It’s a third into the film before we get to the point of four people in a room. Thus giving the illusion of production value in a microbudget film. In theory, we can make our zero budget film look like it was made for ten times the amount, just by making some creative choices at the scripting stage. MORE: Writing The Low Budget Screenplay, Part 2

8. Use what you have around you

We wanted a torture sequence in the film where our kidnappers try to extract information from their victims. But they weren’t very good torturers and used whatever they could lay their hands on. So the torture implements end up being a box of tampons, a pack of tea lights and a beer mat. Total props budget for that sequence: £10. And one of my favourite sequences in the film. MORE: 10 Ways To Scupper That Microbudget Film by Matt White

9. Don’t use Final Draft, use Scrivener

I bought Scrivener for £30 two years ago and it’s fantastic. Formats beautifully, easy to organise, exports to PDF and FDX, imports from everything. It’s a wonderful tool, and has changed my writing life. If you’re looking for a piece of software, I can’t recommend it enough. MORE: Which Screenwriting Software Is The Best (Paid for & Free)? Recommendations from Bang2writers

10. Even micro-budget films have a budget

We’ve squeezed every aspect we possibly could – written for the locations, props and costumes that we had available to us, but ultimately it still all costs money. We’ve spent £10k of our own money so far, and we’ve shot 2/3 of the movie. We need about another £15k to shoot the rest (the more expensive beginning!) and yes, we’re crowdfunding! MORE: 5 Tips On Making Your Crowd Funding Campaign Stand Out

BIO: Ross Aitken is one of the writers of 50 Kisses (ADVICE) and together with co-writer/director/producer James Browning run Ikonic Films. Kidnap Me is their first feature and is currently crowdfunding via Kickstarter. Check out the trailer, HERE, plus the website HERE and “Like” Facebook Page HERE. Follow Ikonic Films on Twitter and join the party!

OMG!!! I have a copy of William Ryan's excellent 'How To' on novel writing to give away to one lucky Bang2writer 😀😊❤!

If you want to write novels like moi, I can recommend this comprehensive and useful guide.

You know the drill - if you want to be in for your chance of winning, comment on THIS POST by Sat May 15th, 5pm (GMT).

T&Cs: international entries welcome. One entry only please. LIKEs don't count, you must comment - but even just a smiley face will do. Winner picked by random number generator as usual. Good luck everyone!

Many thanks to Bloomsbury Publishing UK for this fab giveaway. ... See MoreSee Less

Miss this earlier? Be the next Marvel or other big story multiverse by taking advantage of free and cheap online platforms! Check out 6 Steps To Write Your Own Serialised Story bang2write.com/2021/05/serialised-story-tips.html ... See MoreSee Less

NEW POST >> In the internet age, serialised stories can be uber-popular, so here's 6 Steps To Write Your Own Serialised Story ... See MoreSee Less

6 Steps on How To Write a Serialised Story - Bang2write

Serialised stories are super-popular in 2021, especially online. Here's the tips you need to write y...
View on Facebook
·Share

Following on from the B2W post about grabbing readers' attention, what are YOUR top tips for doing this?