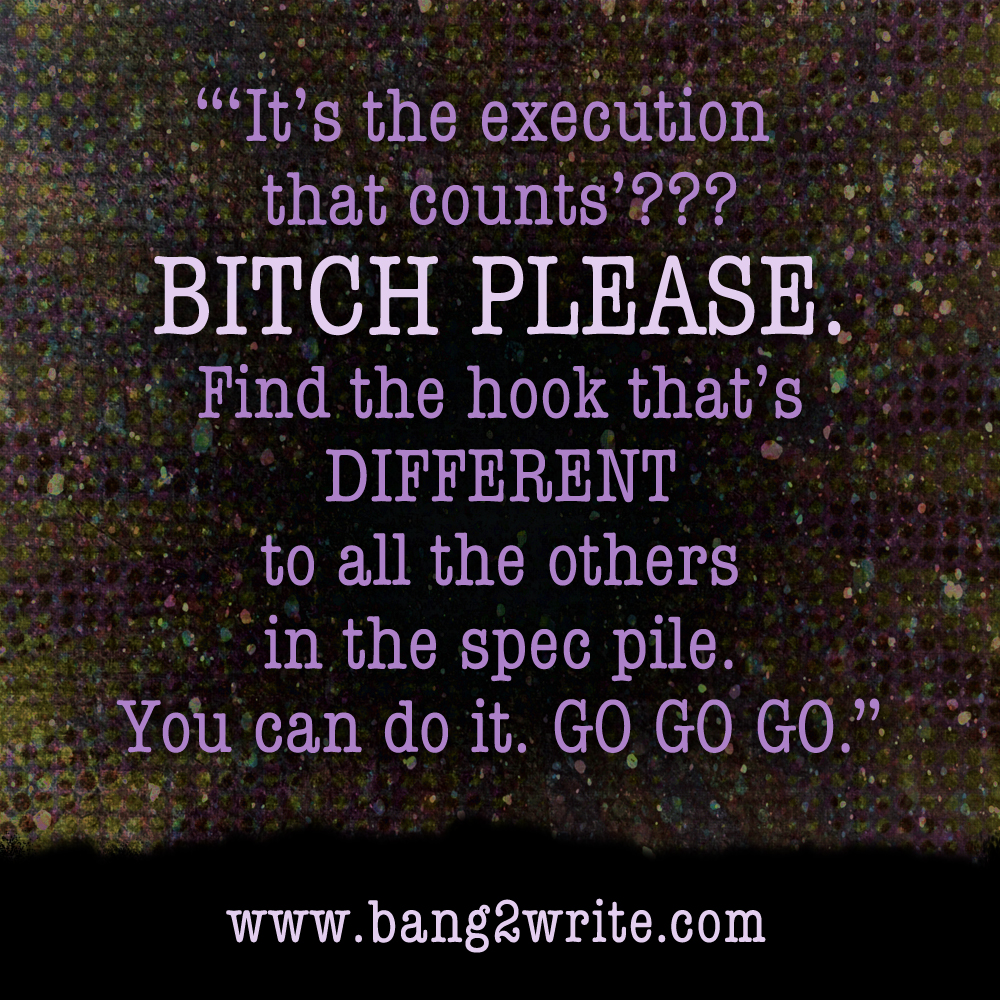 So, you think all that stands between you and “making it” is the strength of your writing, the shininess of your craft and a horde of other writers, rabid with the THIRST FOR SUCCESS?

There’s you as well. That’s right … YOU! I’ve seen so many writers divert or even kill their OWN chances in meetings, online, at pitchfests, developing their work … Anywhere you care to mention, in fact. Recognise any of these?

Yes, various stuff happens in real life, but fiction is NOT real life – it’s a **representation** of real life. In other words then, everything has to feed into the story somehow. Think about it for a second: characters only go to the loo in films, TV or even novels so they can get killed with their pants down; or find out they’re pregnant; or for comedic purposes – “FRANK AND BEANS!” What’s more, truth is ALWAYS stranger than fiction. In other words then, don’t worry about so-called “reality”; if writers did that, we’d soon run out of stuff to write about! Instead think: does this FIT my narrative’s internal logic? MORE: Sacrificing Facts For Drama

This is the thing. Nobody cares how *accurate* your character is; they care about how it fits into that STORY’S LOGIC again. So it might be that your great-grandmother was a spy for the French Resistance who was also a double agent for the Nazis AND a housewife AND mother of four … But if we can’t work out what the protagonist BASED on your great-grandmother WANTS (The Allies to win? The Nazis to triumph? Dinner on the table?? To get to the bottom of the dirty washing basket???) then we will lose interest, because your character’s journey will be all over the place. MORE: How True Can A “True Story” Be?

3) “I’m worried about my artistic integrity” …

… Aka “I don’t want my real life friends / relatives getting the hump with me”. Often, when writing true stories or inspired from real lived experiences, writers will “hold back”. Basically, they’re scared. Scared of what, you say? Well, the aforementioned real people recognising themselves in the story is a favourite, but so is the getting it “wrong” (especially with reference to historical pieces or biography); plus also the fear of living through it all again. You can’t blame them, really: who wants to go through the spiritual pain of confronting all those old issues? YOUR TARGET AUDIENCE DOES. So knuckle down. Find the heart of your story, connect with its emotional truth and make it authentic, no matter what! MORE: Telling Lies To Tell The Truth

Great! But tell me, who goes into speculative writing of novels and screenplays WITHOUT thinking they have both heart and passion? I’m sure one or two exist in a “SHOW ME THE MONEY!” capacity (good luck, LULZ), but generally everyone writes SPECS because they feel the burning desire to write a particular story or stories. Some of that desire will be misplaced; some will be right on the button. For most of us, we’ll end find we end up somewhere in the middle. Whatevs. But telling industry pros it’s “heart and passion that drives you” is not going to impress them I’m afraid … They’ve heard it a gazillion times. And like I always say, half the battle is differentiating yourself from the swathes of other writers out there and knowing what you’re talking about. MORE: 12 Tips For Taking A Meeting

5) “The marketplace is the top consideration for my writing”

Not enough writers consider the marketplace; they see it practically as a dirty word, like this guy (name REDACTED) when I shared the article 3 Reasons To Write A Low Budget Marketable Screenplay on Facebook recently:

He is not unusual and by no means the most enraged scribe I’ve ever encountered over this issue, either. But what drives writers to believe being “marketable” is SUCH a bad thing is a post for another day, because the flipside of *that* veritable hornet’s nest is the fact some writers believe the marketplace is their ONLY consideration.

Sure, there are writers for hire / hacks out there who are getting produced and published by churning out total bilge. We see it every day. And maybe you’re anxious to join them and be a hack yourself. Whatever. I’m not judging you, we all have bills to pay and trophy spouses to support. But in order to BE a hack, you have to write something brilliant first to GET NOTICED. The same rules still apply: you can’t sell out if you have **nothing of worth** to sell. MORE: Tick The Box Writing Vs Perfect Craft

Self Belief is key. If you’re putting a time limit on your endeavours (“I’ll see how it goes for X amount of years”) or putting mad ultimatums on the progress of your work that you have NO control over? You will fail. It is as simple as that. You might as well quit now and forego all those painful redrafts and rejections. Serious. You have to believe you can succeed. I know that’s hard when you’re British because we’re all taught to be self defeating wretches in our culture, but seriously: FUCK THAT. Instead of thinking, “Why would I succeed?”, borrow a lesson from our Yankee cousins and say, “Why WOULDN’T I succeed?” Because trust me, the ones **I’ve** seen succeed do the latter, not the former. So do what you have to do, or go home. MORE: The Tip Of The Iceberg.

Aaaah my ultimate fave … You know the parent who enthuses mercilessly about how forward or talented their kid is, but you look at him/her and think, “Looks pretty normal to me”? Writers are the same: often they’re so in love with their concepts, stories or characters they’re completely blind to how dull their work actually is. What’s more, even when someone tries to save them from themselves – a script reader, a feedback giver, a pitch meeting producer or publisher – those writers will LIE to themselves and say, “They don’t understand! It’s the execution that counts! When they actually READ my screenplay, they will APPRECIATE MY GENIUS, because my unique voice will SHINE THROUGH!!”

NEWSFLASH: if your work or pitch is accused of being too samey, you need to listen … Because it doesn’t matter how brilliant your writing is, if the concept does not get people EXCITED they will not request your pages. I cannot stress this enough. So stop kidding yourself it’s the execution that counts … It’s the hook that counts. And don’t you forget it, BITCH!! MORE: 4 Ways Samey Stories Happen … And 1 Thing You Can Do About Them, plus check out Chris Jones’ great post detailing a REAL email exchange between a producer and a writer who **really** knows how to burn bridges: Why Producers Will Not Read Your Script.