So I’ve written a lot online about teen pregnancy (especially on Twitter, via #teenpreg & #FeminismIsForTeenMomsToo), as well as  my prochoice novel, THE DECISION: LIZZIE’S STORY, not to mention my own experience of becoming a mother as a teenager.

Lizzie’s Story is out this year sometime in English, having been published in the German Language last year … And she’s a character that just won’t stay confined to the pages of the novel, ‘cos she’s JUMPED OUT and got her own Facebook page and Twitter account! Follow her here, as LizziesDecision, tweeting about the ins and outs of #prochoice matters, but also sex, relationships, school, exam stress, parenting, bullying and various other issues affecting teens today!

I often say writers use too many clichés and stock characters in their writing, but here is an opportunity to get involved and talk to people who have BEEN THERE. What’s not to like?

2) Stand up for young parents – and their kids!! 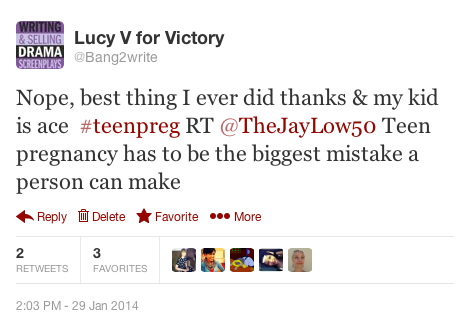 If you follow me on Twitter already, you’ll know I beat the drum for young parents and prochoice VERY loudly. Sometimes progressive people say to me, “I don’t understand the big deal” — and it’s because of attitudes like the one here, which frankly is one of the BETTER worded ones I’ve seen online. It’s not even the ignorant Right’s shaming pregnant teens have to deal with either, but The Left’s insidious messages of “teen pregnancy prevention” which isn’t really about prevention at all, as Lauren Rankin explains.

Lizzie is tweeting links she finds on social issues daily, several times a day — meaning writers will find a plethora of material on her Twitter TL and Facebook page.

4) Witness and participate in REAL conversations about REAL issues.

This tweet exchange between me, Lizzie and fellow former teen Mums Natasha and Joelle caused a stir in my PM, DM and email  inbox, after I discussed with Lizzie her boyfriend’s “NON reaction” to her pregnancy news: 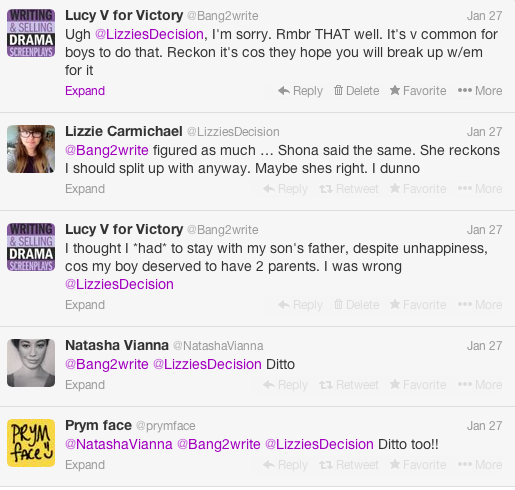 The people who responded to me were a mixture of other teen parents who concurred, saying they too wished they’d had the courage to walk away from their partners sooner, as well as non-teen parents who confessed they had never considered this side of the story before and it had really opened their eyes! In other words, conversation like this WORKS in raising awareness — and we need awareness if we are to write with authenticity.

5) Get Shout Outs For Your Own Projects 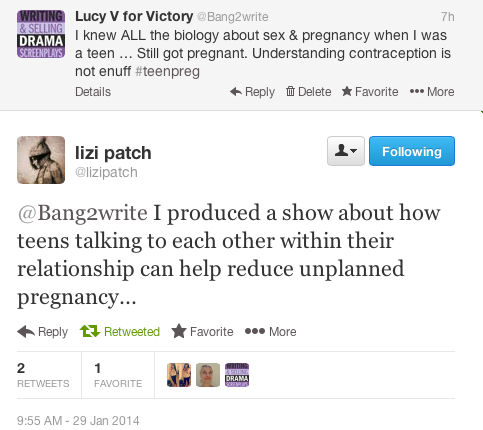 I’m keen to hear from and about other projects (transmedia and otherwise) that deal with social issues and teenagers. I’ve already joined forces with the amazing TryLife_TV, a drama teens control from their PC or laptop as well as the amazing people behind #youngmumschat such as the lovely Prymface. If you want to chat to me about your project or initiative, then get in touch via social media or via my contact form. 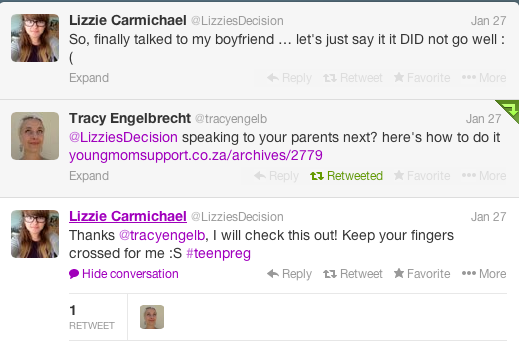 I feel really strongly that teens  must be able to access the best information and services – not only to deal with teen pregnancy, but other issues such as bullying, self harm, exam stress, anorexia and so on. Living in a rural area as I was growing up in the 90s and before the internet, both of these things were hard to come by and I remember the panic and confusion well. If you know a pregnant teenager who wants to ask someone who’s been there about it, anonymously, they can leave their Qs on my Ask.Fm page.

So I feel REALLY passionately that if I can help, I will – and it’s this ethos that will be behind the whole series of Decision books, because after Lizzie will come JASMINE’S STORY, which is about teenage depression.

Please come on this journey with us!

The Decision: YOUR Story