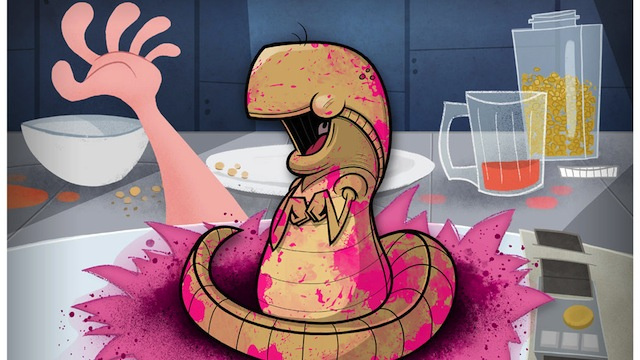 Yep: Not. Even. Kidding. We’re talking novelists AND screenwriters, plus pro writers JUST AS MUCH as the seasoned and newbies too ! Just about every single writer IN THE ENTIRE UNIVERSE including aliens (and why wouldn’t *they* write?) get these two things wrong in their early drafts. And NO it’s not hyperbole either!

Bang2writers might come to me and ask, “What are the most likely things writers get wrong in early drafts?” I suspect this is because they want to try and avoid said mistakes and go straight to the good stuff. And c’mon, who wouldn’t?

BUT YOU CAN’T. Because unfortunately it’s not *just* (!) a question of using perfect craft, fancying up that format or polishing that dialogue ’til it shines … It’s a question of REACHING INSIDE YOURSELF and pulling out your writing GUTS and then SPLASHING THE GORE ALL OVER THE PAGE. A bit like this, in fact: 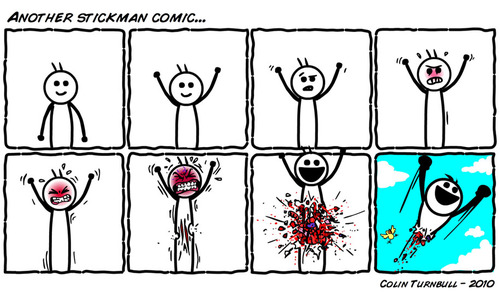 So, yeah. ALL WRITERS have problems with these two things in early drafts … and if they say they don’t? THEIR PANTS ARE ON ACTUAL FIRE. But what are these two problematic areas, that have readers and editors reaching for the red pen?

I got 99 problems but a script ain’t one. OK it is – and it’s ‘cos your characters SUCK. Are you trying to kill readers and editors the world over? BECAUSE YOU JUST MIGHT. Here’s why:

i) Too many characters.

It’s very simple, homies. You just DON’T NEED a billion named characters in your screenplay! 6-8 main roles MAXIMUM is *about* right, depending on what story you’re telling and whether it’s for film or TV. In novels you have more leeway sure, but don’t forget that you don’t want to confuse the reader either, so think very long and hard before introducing a new named character. Instead, think about character role function and what that character contributes to the STORY. Boom!

You know how someone writes something really FRESH and ORIGINAL and then everyone else imitates it until we all become SICK to the back teeth of it? THAT. Don’t do it. Always, always innovate. Also: Maverick Cop with a dead wife/girlf: get outta my sight! You were cool in 1987. Now you’re stinking the place out with your psychotic rage and Mullet. Begone! Same goes for you too, Stock Characters – boooooo!

“You know those boring clichéd or stock characters? I want something that’s the EXACT OPPOSITE and what’s more, I want those characters to be TOTALLY UNRECOGNISEABLE.”

Said by no reader, editor, agent, producer, publisher or audience member EVER. Balance, my friends! Give us something new, but don’t take us to the other end of the scale, FFS.

NEWSFLASH: Your characters don’t need to be “likeable”. This is bullshit. But equally if they’re SO obnoxious they have no redeeming features whatsoever (even if that’s just being brilliantly humourous with their obnoxiousness), then we can’t get behind them EITHER. Because characters need to be RELATABLE.

vi) Characters without a clear motivation.

Sure the objectives of various stories differ, but if I grind your story up into the basics, what do we get? Using a character that wants or needs something. So if I don’t know what your character wants, why s/he wants it, how s/he proposes to get it and when by, then what am I signing up for exactly? Sure, a novel may tend more towards the psychological here, but still there is the question: Why have we dropped into these characters’ lives AT THIS POINT? If you can’t answer, then neither will the reader.

vii) Characters doing what we expect.

A lot of writers don’t believe that characters may do EXACTLY THE SAME THINGS in various stories, regardless of genre. On this basis then, go read your nearest spec pile of novels and screenplays. Seriously. OFF YOU GO. See you in 5 years …

vi) Characters doing something completely out of the left field.

Aaaaand we’re back to point iii). Seriously, DON’T take us from “samey” to OTT. This writing shit is about BALANCE, innit. Tattoo it on your forehead (only do it backwards, so you can read it in a mirror).

Good characterisation is not about being “the same”, but it’s not about being completely off the wall, either. Audiences want to recognise **something** of themselves – whoever they are – in your characters, so make sure you are authentic and don’t EVER write clichés or stereotypes. Last of all: ensure your characters know what they’re doing, else you will give your audience NO REASON to get on board their journey with them.

Listen carefully: I SHALL SAY THIS ONLY ONCE (bonus cookie to whomever gets that 80s TV reference).

i) The First Ten Pages.

Novelists: don’t make the reader “wait” for something to happen while you spend the first thirty or forty pages setting up your characters and storyworld, seriously. Your readers are the most media literate they’ve ever been! So hit the ground running, they can take it. More: 8 Ways To Jump Start Your Description.

Screenwriters: make sure you have an OPENING IMAGE. Make sure your first page rocks. Don’t start with clichés. Let us know who the characters are and state your story’s intent. End with a page 10 that MAKES the reader want to read more. Here’s 10 further Questions For Your First Ten Pages.

ii) What the hell are you using, here?

First of all, does your story NEED to be non linear? If it does, then you need to RE-structure your structure!!! So first, know what you’re doing structure-wise, before you re-arrange stuff.

When it comes to novels, your story may well be psychological and time may well be more “fluid”, but that doesn’t mean you can jump all over the shop: readers still have to be able to FOLLOW. You need to indicate this in the description clearly and preferably “anchor” the reader in the “present” somehow. You can do this any way you want, but in addition there needs to be a “point” to that “present” – if you’ve just got a character sitting there and thinking/remembering stuff, then why not actually have the story IN the “past”, since it’s obviously more interesting?

Screenwriting-wise, when it comes to storytelling devices like intercuts, flashbacks, framing stories, dream sequences, montages etc, first ask yourself: are they “fillers” — does the story warrant them a) at all? b) at this particular place in the narrative? More: Good Examples of Storytelling Devices.

Secondly, ask yourself: can the reader FOLLOW what you’re doing? Have you indicated where we are time-wise ON THE PAGE, using clear formatting techniques? More: Format One Stop Shop.

Are your scenes, chapters or moments too long? Be honest with yourself. When I read early drafts of screenplays or novels, often characters will talk for pages and pages. As a result, the work becomes rather theatrical and play-like, so dialogue “leads” the story. Remember, we want to read novels or see movies about characters DOING stuff. If you ever feel compelled to write a long conversation in your screenplay or novel, then ask yourself if you could turn it into ACTIONS instead. Bet you can.

Thanks to all the first ten page advice on the web, very often screenplays will hit the ground running now, then slow down and tread water from p 10 or 20 onwards.

Novels will frequently have the opposite problem: they will spend an aaaaaaaaage painstakingly setting up the entire storyworld,  and everything about its characters before actually kicking off.

So envisage Yves Lavandier’s great advice: your character wants/needs something, but is encountering obstacles in his/her way, so is having to “climb walls, each one bigger than the last”. So what’s in your character’s WAY and HOW will s/he defeat it (or not)?

And last of all:

There is nothing more dull than a spec screenplay or novel where the writer has CLEARLY said, “Well I need to ensure [THIS] happens on [THAT] page to keep my audience interested.”

No. It is NOT interesting. It is TICK THE BOX WRITING. And yes, it is completely and utterly OBVIOUS. Have faith in your characters, your writing and in your story. Be intuitive. Don’t let structural methods or formulas dictate what you write and where.

Use all the structure advice on the internet and in books to your best advantage, but there is NO SUBSTITUTE for using your own intuition and having faith in your characters, your story and own writing. It’s this that will showcase your voice, ultimately. Now — go start that redraft!!!