Many thanks to Lorna Freytag (and the lovely David for facilitating) in bringing the awesome Sock Monster to mine and my WGs’ attention! I love the simplicity of the story and find the notion of storybook apps really interesting, plus my girls Emmeline and Lilirose adore the Sock Monster and have been searching for one in their bedroom all week to feed *their* socks! What I love about Lorna’s post  is how she demonstrates how the existing “pre-sold” monsters helped inform her story, yet also make hers stand out too: the “same, but different” in action! Over to Lorna … Enjoy! 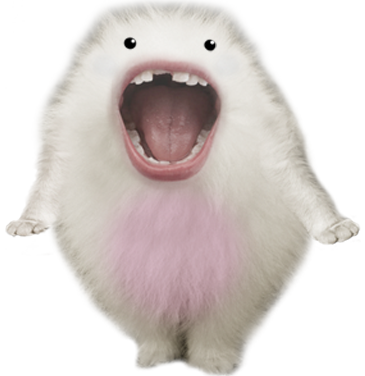 It’s one of the strange aspects of human nature that we like to anthropomorphise our fears and emotions as monsters and other-worldly creatures. The Tooth Fairy and the nefarious monster under the bed spring to mind immediately, but it’s not just something kids do. At some point, we’ve all blamed various screw-ups on gremlins. I’ve lost count of how many pens have been lost to the pen monster (only to be returned partly-chewed in a state that I’d rather not touch, thank you very much). Not to mention, of course, that “green-eyed monster” that occasionally rears its head.

During the creation of my recent iPad storybook app Sock Monster, I looked to my favourite monsters for inspiration and guidance – I don’t mean I communed with them, but rather I wanted to take what made each of them work as characters to help find the essence of Sock Monster himself. These are they.

Sully may not seem an obvious contender for comparison to the insatiable Sock Monster, but what I took from Sully was his commitment to his ideals. He knew he wanted to be the best scarer and worked hard at it. Likewise, Sock Monster knows he loves socks – so long as they’re not stinky.

The inspiration here is a lot clearer! Cookie loses control when confronted with a plateful of cookies and Sock Monster is never happier than when he’s holding a giant stack of freshly laundered socks.

In this instance, the inspiration came from the anticipation – what does the Gruffalo really look like? What does a Sock Monster look like?  Sock Monster took many sketches and revisions to get right, to get the balance between ravenous and friendliness.

“Show, don’t tell”, they always say, and never more than in the economic storytelling used in Where the Wild Things Are. Obviously, given the reading age for Sock Monster, I needed to keep the words simple and use the character, background and interactive elements to drive the story.

The fact you can customise how your Moshi Monster looks influenced a little known aspect of the Sock Monster. Every time he eats a sock, Sock Monster takes on the colour and pattern of that sock. Who knew?

BIO: Lorna Freytag’s work fuses together her love for photography, illustration and children’s stories. She uses her many scribbled sketchbooks, camera and post-production techniques to bring her ideas to life. Lorna has written and illustrated several picture books for young children and been nominated for several awards.

Her latest creation is Sock Monster, a quirky storybook adventure with original hand-crafted artwork., designed for iPad. The story is for wee monsters aged 5 and under (but we’re sure you’ll love it just as much!). Sock Monster is available now at the App Store. Check out Lorna’s website, here.