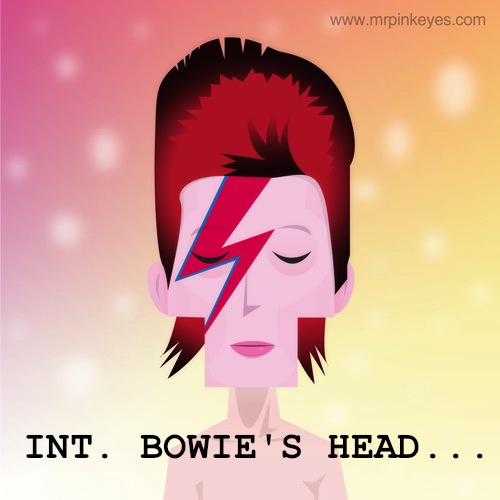 David Bowie has graced our screens many times over the years in varying amounts of lyrca, but who ever knew that he wrote a screenwriting manual?
In-depth analysis of the lyrics to Life on Mars? shows they are not surreal non-sequitirs at all but tips we could all learn from.So play this, sit back and read the commentary notes below.
1. It’s a god-awful small affair

2. To the girl with the mousy hair

4. And her daddy has told her to go

5. But her friend is nowhere to be seen

6. Now she walks through her sunken dream

7. To the seat with the clearest view

8. And she’s hooked to the silver screen

9. But the film is a saddening bore ‘cause she’s lived it ten times or more

10. She could spit in the eyes of fools

11. As they ask her to focus on sailors fighting in the dance hall

13. Take a look at the Lawman beating up the wrong guy

18. That Mickey Mouse has grown up a cow

19. Now the workers have struck for fame ’cause Lenin’s on sale again

20. See the mice in their million hordes from Ibiza to the Norfolk Broads

21. Rule Britannia is out of bounds to my mother, my dog, and clowns

22. But the film is a saddening bore ’cause I wrote it ten times or more

24. As I ask you to focus on sailors fighting in the dance hall…

BIO: Matt Reynolds is a screenwriter and playwright living in London.  He has written short plays for theatres around London and the Edinburgh Fringe Festival. His first full-length piece is in pre-production with Quirk Productions. Matt may also be seen about town as his ukulele-wielding comedy character alter-ego Artie Skittle.
Share this:

previous5 Ways To Approach Your Rewrites (And How To Know When It’s Done!)
next9 Ways To Write Great Characters