— No *real* spoilers, though do note I discuss stuff like theme, character arcs, dialogue from a screenwriting craft POV, as ever — 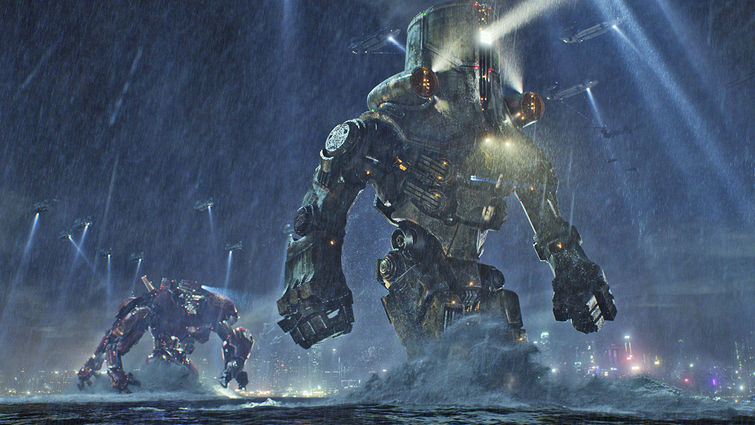 I can just see how **this** meeting went.

And in my mind I can see DECADES of screenwriters attempting to offer up the goods – but you just know everyone screwed it up by being too whacky, too OTT or conversely too arty/serious. And then finally, someone somewhere pulled it out the bag and finally it gets greenlit. W000t, etc.

So when PACIFIC RIM turned up on my radar, I wasn’t too bothered about it. After all, it’s Giant Robots Vs Giant Monsters. Maybe I’ll watch on DVD. When I’m drunk.

And then the word on Twitter is: Pacific Rim rocks.

Giant Robots vs Giant Monsters got us through the door – the definition of a commercial hook, in a genre-busting movie.

And the rest made us love it … here’s why.

Look, you know I love Hollywood Blockbusters but let’s face it – white American men always save the world in these movies and really, when we say “world”? We really mean “America”. But that’s OK. I’m fine with that*. Really. I even enjoyed INDEPENDENCE DAY and its ludicrously stereotyped representations of soldiers round the world. Brits: “I say! The Americans have only gone and bloody done it!” (*Obviously in an ideal world there would be MORE VARIETY as standard, that goes without saying).

Yet PACIFIC RIM completely sidesteps this issue by not only trashing cities from around the world (a staple in disaster movies), but by including characters from those places, meaning we don’t JUST watch Americans kicking ass for once. Whilst I have to admit I was aching to see London get royally trashed by the Kaiju, it was refreshing to see the likes of Sydney disappear under the monsters and get a hint at why the Hansens do what they do.

What’s more, the story makes great use of a variety of backdrops, my favourite being the so-called “Bone Slums”, vibrant places of ethnic diversity, built from the bones of the monsters by enterprising humans who not only refuse to lay down and die, but use the situation to their advantage. If that’s not “Blitz spirit”, I don’t know what is!

Before I watched the movie, I heard a lot on social media from screenwriters about how apparently terrible the dialogue was, so it’s fair to say I was expecting on-the-nose clunkyisms left right and centre. Remember, I am not a big fan of most movie dialogue; as far as I’m concerned there’s always too much of it. I do not worship at the altar of Whedon, Sorkin or Tarantino – or any other screenwriters celebrated for their dialogue.

So imagine my surprise when not only did I think the dialogue was not bad, I actually thought it was GREAT!

I think what people were disappointed about was not so much “terrible” dialogue, but the fact the dialogue was UNUSUAL for this genre … There are no Will Smith/Arnie-style comedy quips as the characters land in hot water; there’s no big overblown monologues about standing up for yourself and/or being ready to die; and there’s no whining about being misunderstood between the male lead and his love interest … who never once professes undying love; it is unsaid, thus all the more powerful.

Instead, the dialogue is understated throughout – such as Hercules’ pained “That’s my son. MY SON.” as Chuck goes out with Pentecost at the end. Plus there’s even Gallows Humour to it in places. Because, y’know, it’s the end of the world … and that Blitz Spirit is evidence.

I’m seeing a trend in Hollywood movies towards really great secondary characters – and long may it continue. We spec screenwriters could learn a lot here … The secondaries in Pacific Rim are all nuanced and interesting, not to mention all differentiated from one another, without being too try-hard:

We have “twin” scientists Gottleib, the British fop who puts all his stock in numbers, cast against Newton, who might be a genius, but he’s also a wannabe scientific rock star. The element that unites them is they’re both petulant children, competing for the attention of father figure Pentecost – but it’s only when they finally realise they have to work TOGETHER, they make the breakthrough the mission needs.

Herc and Chuck Hansen are a father/son team who run the vastly updated Jaeger to our lead team Raleigh & Mako’s. The Hansens represent the new and efficient and essentially occupy the space Iceman had in TOP GUN, so it would have been easy for Chuck in particular to be Mr Nasty all the way through (until a last moment where he redeems himself). Yet Chuck is forced to go into battle without his father and his inevitable final journey shows his transition from boy to man admirably, having FIRST resolved his issues with Raleigh.

Even a peripheral character like Hannibal Chau, on screen for probably less than ten minutes, is hugely memorable … and amusing, too.

1. The dynamic between the two leads is hugely refreshing.

Quite a bit has been said about the supposed “woman problem” Pacific Rim has in that there is there only one notable female character in Mako Mori. But for me, screenwriter Geoff La Tulippe sums it up:

As does Wolfblood’s Debbie Moon: 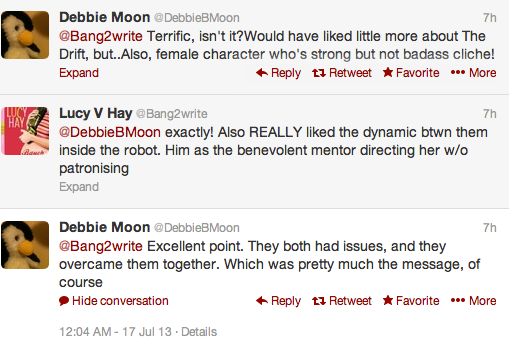 What I really liked about PACIFIC RIM was its abject refusal to get embroiled in gender politics re: sexism in the workplace. Consider this:

There was no problem about Mako being “a woman” – only that she was a rookie.

Whilst **of course** sexism in the workplace is a worthy topic, PACIFIC RIM was not the place for this topic, largely because again, it’s so “usual”. Mako is a woman in essentially a man’s world, so it would have been easy to sexualise her, humiliate her, or intimidate her on the basis of her gender.

And again, it would have been really EASY to go down this path and subject Mako’s character to a long drawn out dialogue over whether it’s sexist – or conversely, not ! – to even let her in the robot. In the very least, you would expect a character like Chuck who has an antagonistic role function to make this point, if only to wind Raleigh up. Instead, Chuck insults BOTH of them by calling them “bitches”, suggesting not sexism, but that notion of how Chuck himself is a spoilt, jealous child who feels he could be usurped by BOTH of them, hence his assertion throughout Raleigh is a “has been”.

What’s more, the dynamic between Raleigh and Mako is really excellent. She is not sexualised or submissive; she is strong and if she doesn’t speak much in the robot, it’s because she’s concentrating cos it’s new to her. Raleigh’s benevolent mentor shows how he too has had to grow up since losing Yancy – and shows the bond between him and Mako, which we feel the moment they meet. In blockbusters, characterisation is typically paper-thin and though characters may “talk the talk” about trust, forgiveness, redemption or whatever, we rarely feel it FOR REAL. Here, in PACIFIC RIM, I genuinely cared about these characters and wanted them to survive – ALL OF THEM – and wasn’t always sure if they would make it. A rare treat.

So Giant Robots vs Giant Monsters is not your thing … Fine. But go see PACIFIC RIM to see how an uber-blockbuster *should* be done … and let’s have some more spec screenplays (blockbuster or not) that bring us something NEW and UNUSUAL, yeah?

And a last word from my homie Pedro, who touches on the notion of “art vs.commerce” here and how they NEEDN’T be mutually exclusive, as signified by PACIFIC RIM director’s Guillermo Del Toro’s career:

So what are you waiting for? Check it out!

Genre Busting: What Does It Mean?

What Is A Marketable Screenplay?

Why We Don’t Need Any More Vanilla Screenplays

previous12 Top Tips For Taking Writing Meetings
nextHow To Get The Most Out of #Londonswf: BE PREPARED!!