I’ve been talking about bad use of social media recently re: constant lobbying for “Likes” etc … So when this popped up in one of my FB streams late Monday night, I was so impressed with such a deviation from the “norm”, I thought it deserved a wider audience. Over to you, Phil! 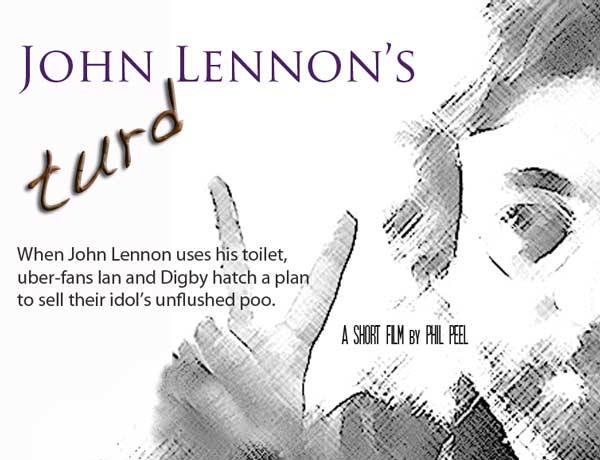 So, my film is called JOHN LENNON’S TURD. Here’s why you shouldn’t “Like” it:

2. It’s clearly exploitative. Debasing a super star celebrity who never did anything so ordinary as going to the toilet.

3. It’s exploitative of women. Melissa de Mol in such a tight micro dress that she had to be sewn into it. …and then having to wear yellow rubber gloves …

4. Also there’s exploitative male nudity. Luke Stevenson is almost naked for much of the film.

5. Being based on a true story doesn’t make it any better.

6. Who wants comedy anyway? We should be making serious films about the crassness of celebrityism.

7. It appears to be about a turd. But there’s no poo seen in it. Trades Description Act 1968 “it is an offence for a trader to make false or misleading statements about goods or services.”

Like this instead. “John Lennon auditioning on the Voice.” It’s fine bit of film-making.

After being “created” by a dog, Doggy Poo meets various living and inanimate things. No one wants to be his friend, and Doggy Poo becomes sad as he tries to find his purpose.

Don’t get caught with your pants down!

A serial killer mutates with a chemical inside a sewer, to become a monster made of human waste just as the FBI and police are onto him.

Don’t say I didn’t warn you.

Phil was one of my Pitch Me finalists with his screenplay, PHOEBE LANGTRY, the true story of a woman who is abandoned by her husband, yet builds a windmill back in 1812, when women were not allowed to own property. I loved the script and had no notes, so was happy to forward it to people I thought may also like it.

JLT is of course a very different screenplay, but I found it very amusing. I think Phil will go far … So make sure you check Phil and his pages/sites out – this won’t be the last time you see him! 😀